It has been said that the final night of any Halloween Horror Nights event is the best night to visit. The park would have improved on its issues faced in earlier nights. Scare actors would have immersed very deeply into their roles, that they could put on their best and scariest performance. Eventually, the every element in the event becomes part of a well-oiled machine.

Each entry will focus a specific element of Halloween Horror Nights 2 (HHN2). For the fourth issue, also the Halloween Special, we revisit the park during the last night of HHN2. More pictures, videos and new content not covered before can be found in this final feature.

All photos and videos captured on 28/10/2012, the final night of Universal Studios Singapore’s Halloween Horror Nights 2.

The first weekend of Halloween Horror Nights 2 was rather chaotic – there were just too many people and the event was haunted by a constant drizzle on 20/10/2012. There are of course, problems that only surface when (huge numbers of) guests attend the event. There are just scenarios and issues that are not clear during preview nights. Nonetheless, the park took feedback and made changes for the second weekend. Consider this second review as an addendum to the full review on dejiki.com

Extended Hours
Event hours for the second weekend was extended to 1AM. That’s a nice 25% boost. To accommodate the crazy 8:00pm opening rush, HHN2 started earlier at 7:30pm. This greatly eased the massive queues before the park gates, which went as far as the Universal Globe. This change took place from the third night onwards and was not publicly announced. Possibly to stagger the flow at 8PM effectively and not cause eager guests to queue up even earlier. Scare actors were already on set and attractions were open from 7:30pm.

Queues and Haunted Houses
At the end of the House of Dolls scare zone, crew members direct guests towards the Insanitarium. This is somewhat effective to disperse the crowd; but because its just a suggestion, guests can still walk towards New York if they wish. The queues for Haunted Houses were slightly revamped. Dungeon of Damnation’s line extended all the way out, wrapping around the Brown Derby store (which is closed anyway). Insantarium has a revised queue system which makes it easier for the attractions crew to manage the lines.

There were also some minor changes within the haunted houses (which might be silly to describe in great detail), but they seem to be sound decisions to reduce bottlenecks within the cramped environment of each Haunted House.

I’ve noticed that the flow within Haunted Houses was a lot faster than what I’ve experienced in the first weekend. There were more crew members within the Haunted Houses, almost one or two in every room. But I feel that it has to do with people walking faster on their own. No one can actually force guests to walk faster and there were no serious bottlenecks unlike last year (Wardrobe corridor in Vengeance of the Matriarch).

Scare Zones
I had more encounters in Total Lockdown than before. Whether this is due to an increase in scare actors, or existing actors getting more immersed in their roles, I can’t say. The scare zone definitely became more exciting than the first weekend. Be sure to watch the video in this entry.

Bizarre Bazaar had its pushcarts and a smaller prop moved to the end (the area in front of Revenge of the Mummy). This might seem insignificant, but at least the Bazaar is not as cramped and easier to walk, and it’s safer for the roaming scare actors – less likely for them to “mobbed” by guests. It also provides better opportunity for guests to interact with the scare actors.

Conclusion
It’s great to see the park responding to feedback and attending to them. Compared to the first weekend, the last night was definitely more enjoyable.

But… It’s sad to see the park reverting back to normal. I miss the heavy theming and impressive area music and attraction soundtrack – they are a huge leap forward from last year’s. I hope that someday the park would put the HHN soundtrack (with other USS area music) for sale. Though that is unlikely – this is not a Disney park, or I’m sure something will be made available.

To end off this second review: I can’t wait for next year’s HHN. Here’s to hoping that it’ll be a bigger event with more haunted houses and scare zones. HHN3 could do with more event dates, and I’d love to see the introduction of Frequent Fear Passes.

In Final Night, all scare zones are revisited. Enjoy the new photos and videos. 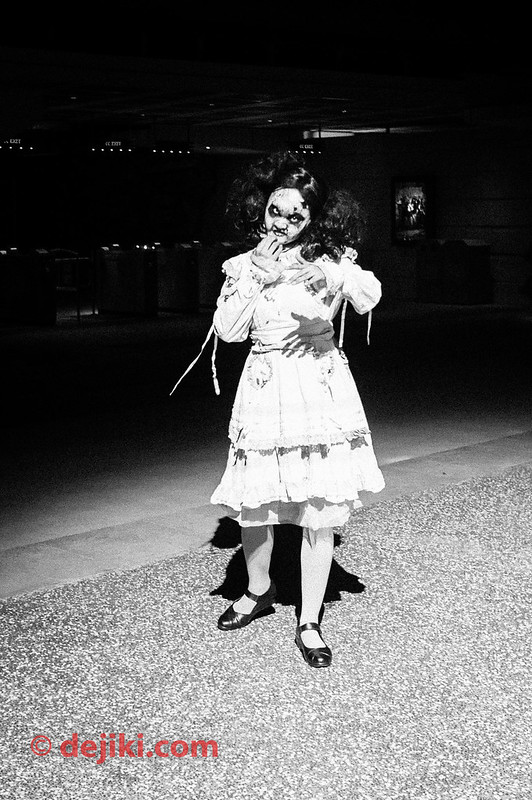 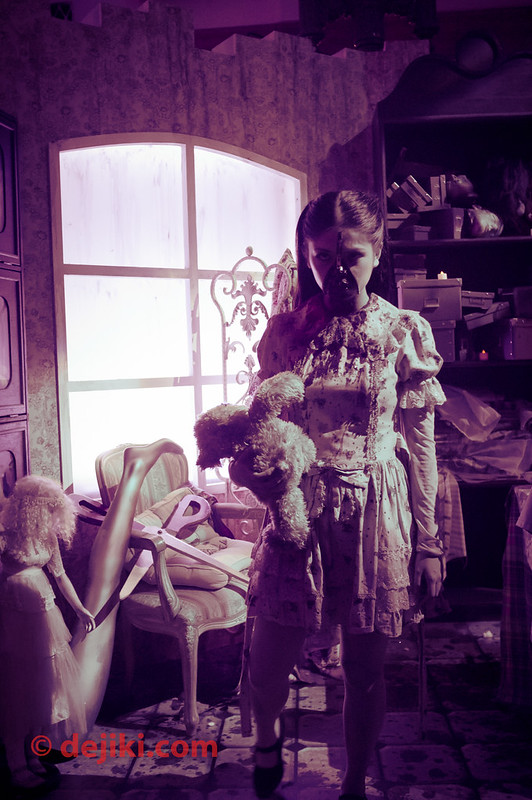 See how The Puppet Master gathers his new victims in this new video.

Be sure to visit Domains of Fear: House of Dolls for more photos and a walkthrough video. 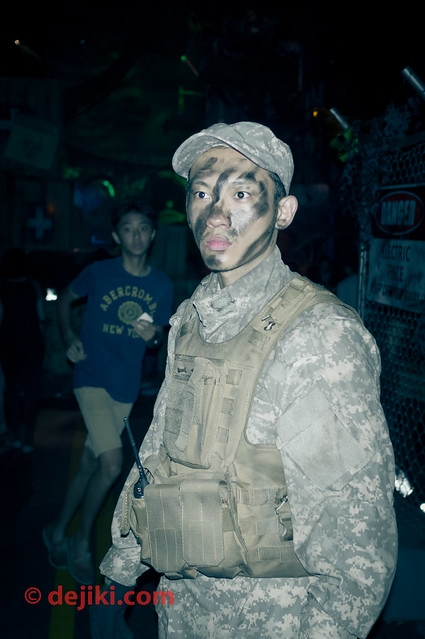 Have a look at the title video screen in this video. Watch closely when the screen flickers… 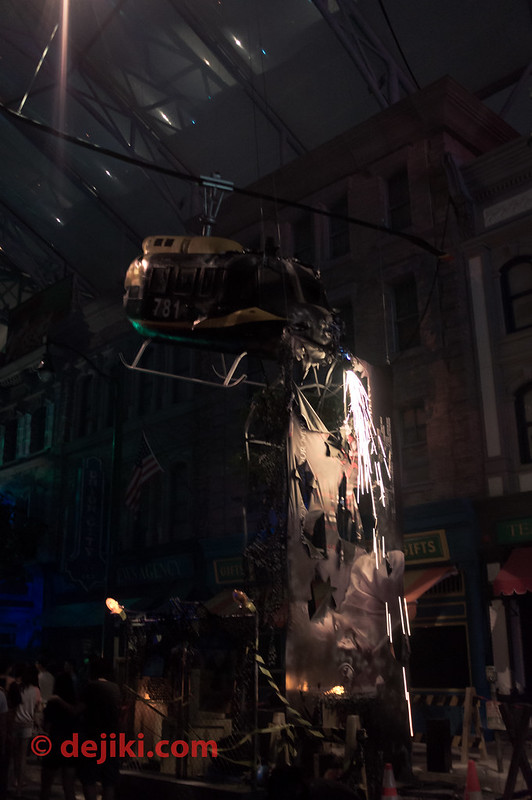 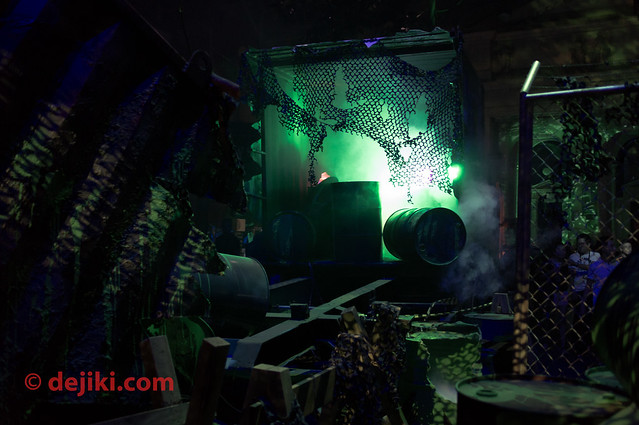 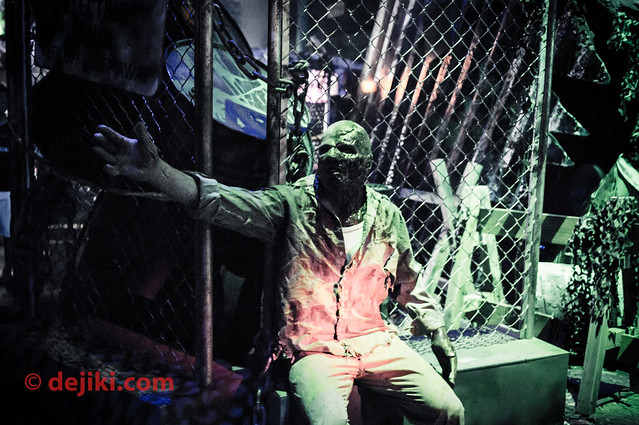 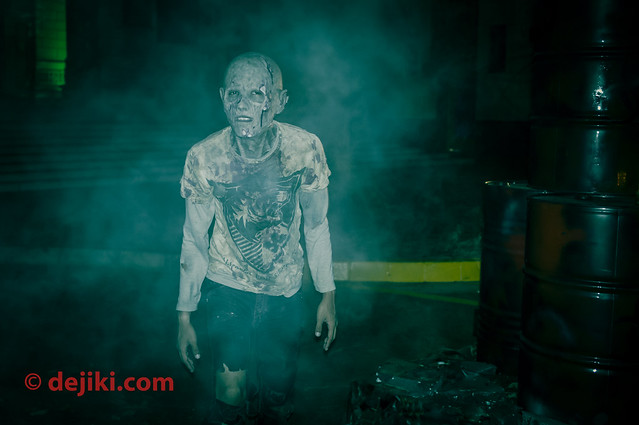 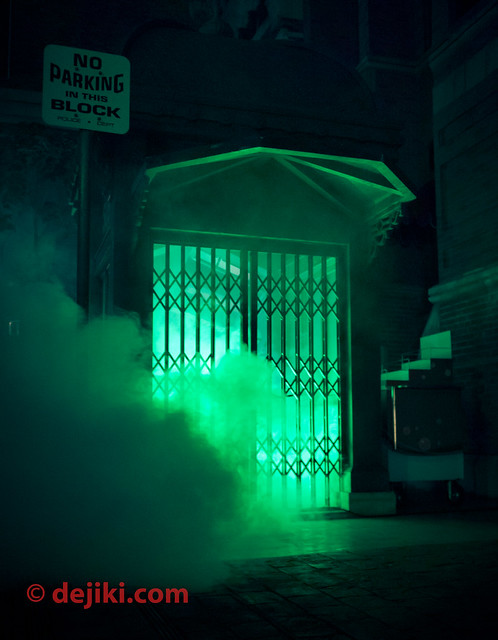 Revisit Total Lockdown in this new extended walkthrough video, recorded in both directions for double the mayhem. Pay close attention to the soldiers and policemen – it’s more comedic than scary.

More chaos and destruction over at the Domains of Fear: Total Lockdown feature entry. 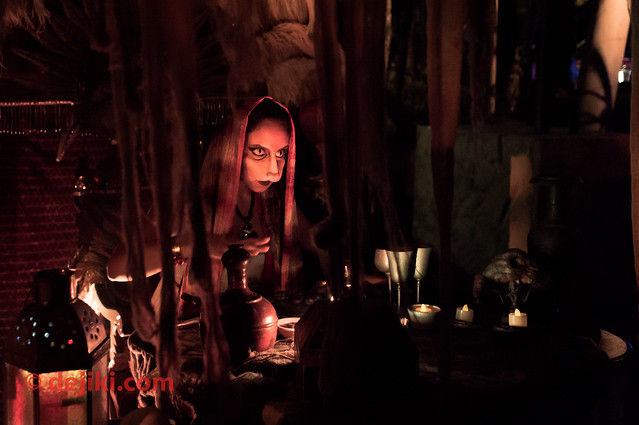 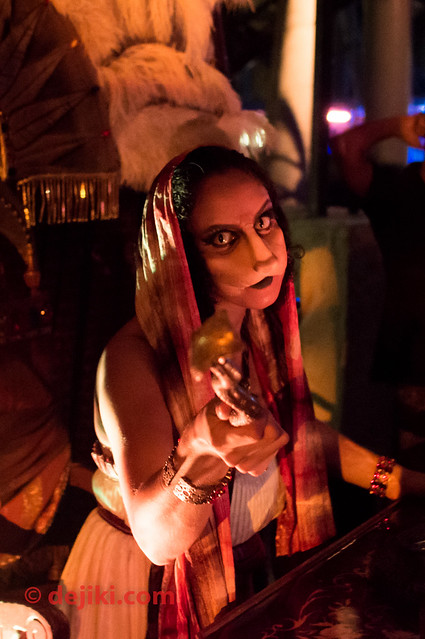 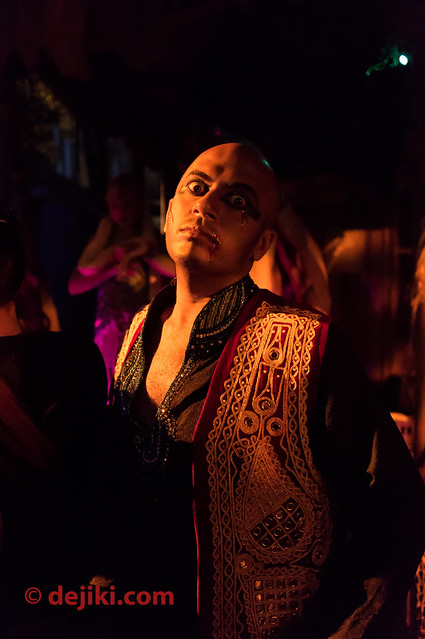 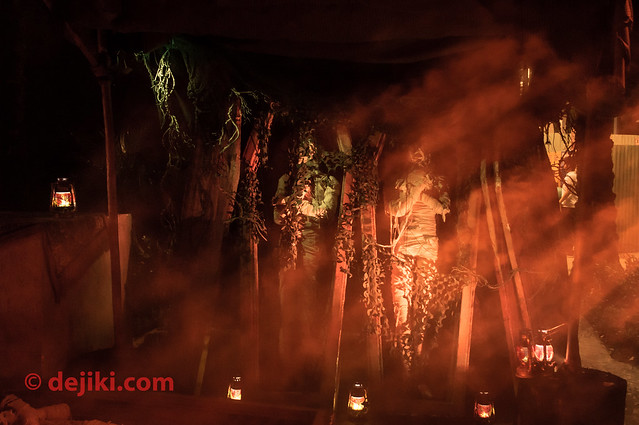 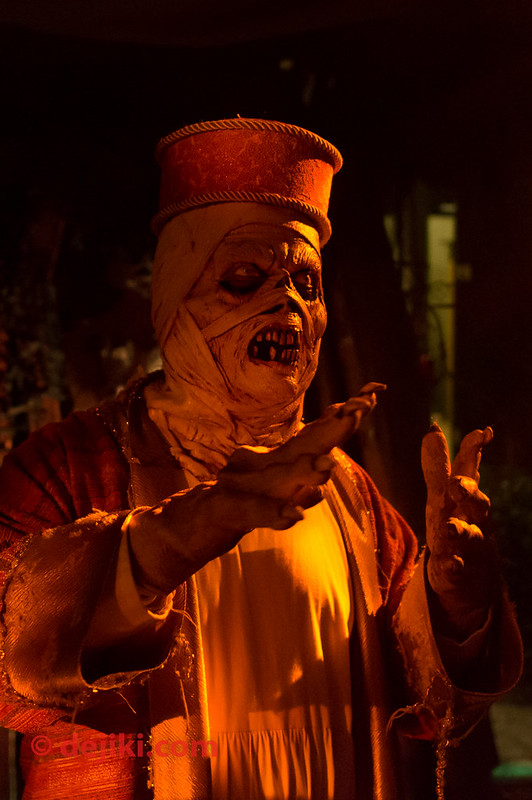 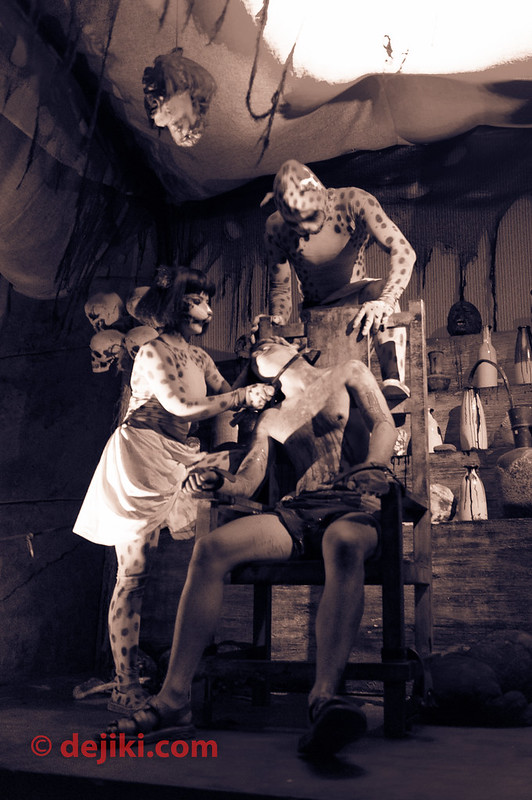 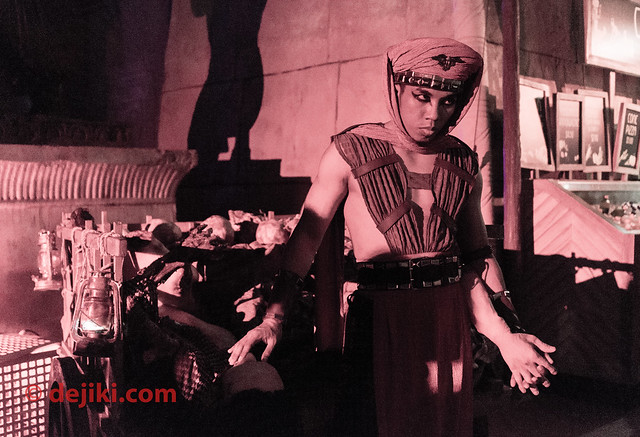 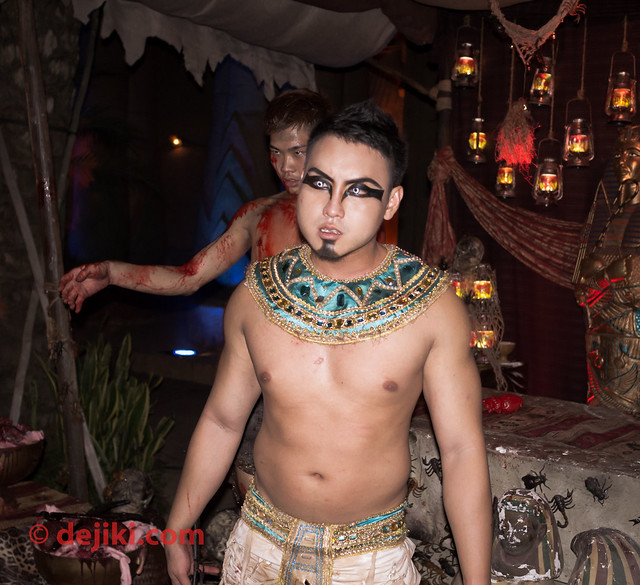 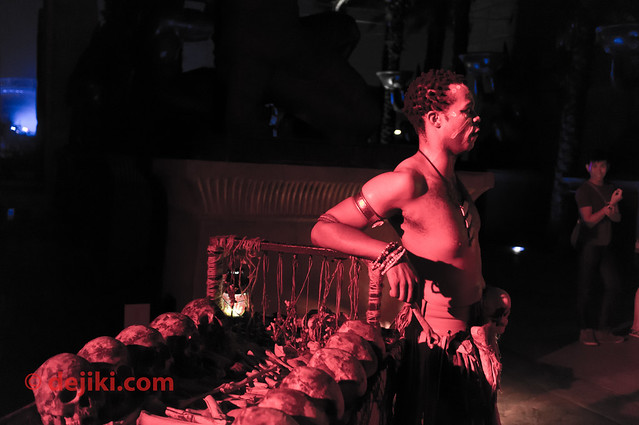 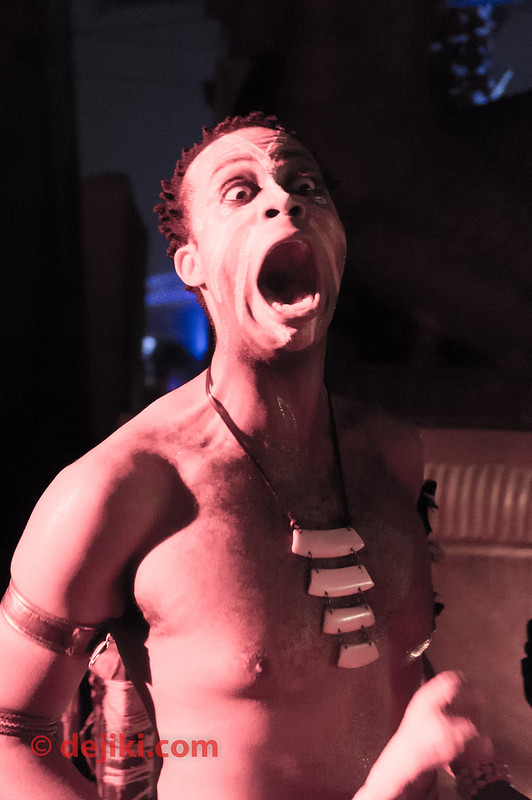 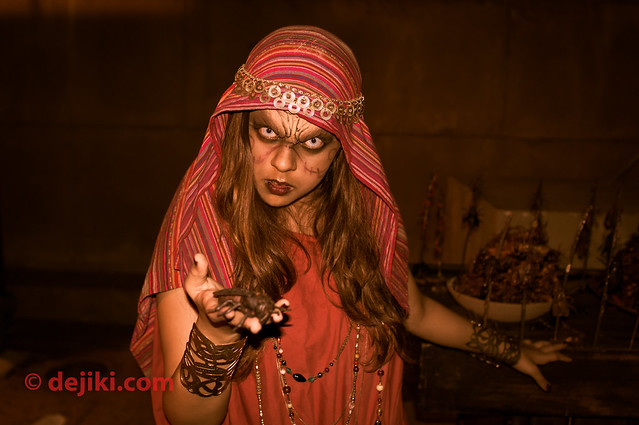 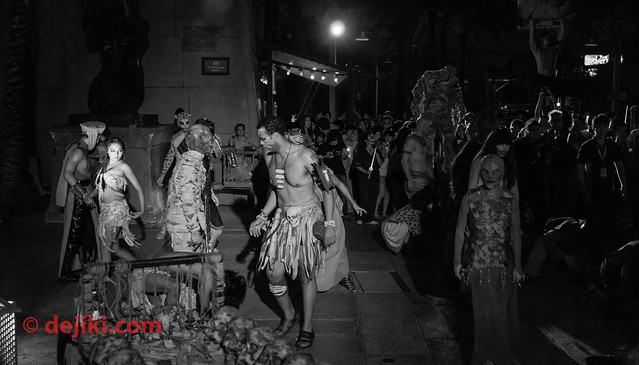 The size of Bizarre Bazaar was extended as push carts and some props were moved out of the Bazaar canopy. This is also where the Flash mob is performed.

The flash mob at Bizarre Bazaar occurs in front of the Temple (Revenge of the Mummy). It starts when the area music changes. Have a look:

See more strange oddities and walk around the marketplace over at the Domains of Fear: Bizarre Bazaar feature entry.

As a bonus, here are some photos of the Insanitarium mini scare zone. Guests could meet some “criminally insane” patients here. 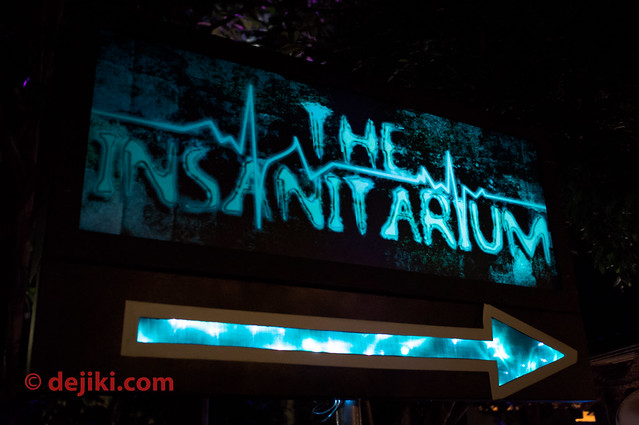 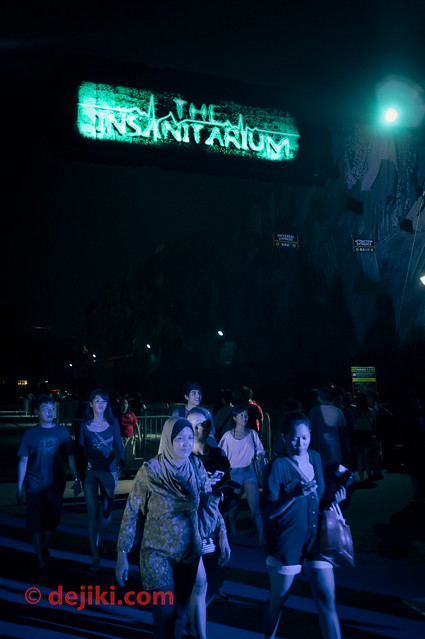 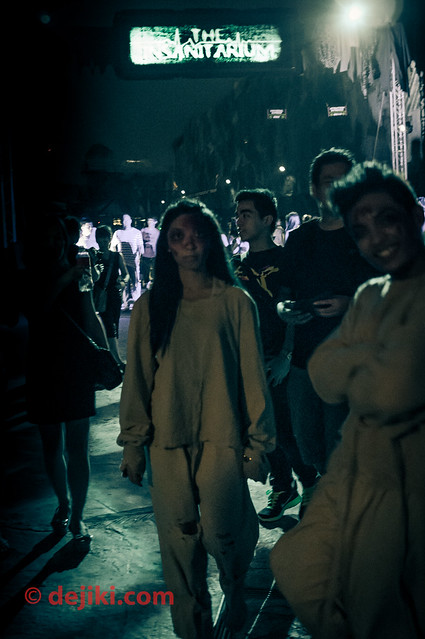 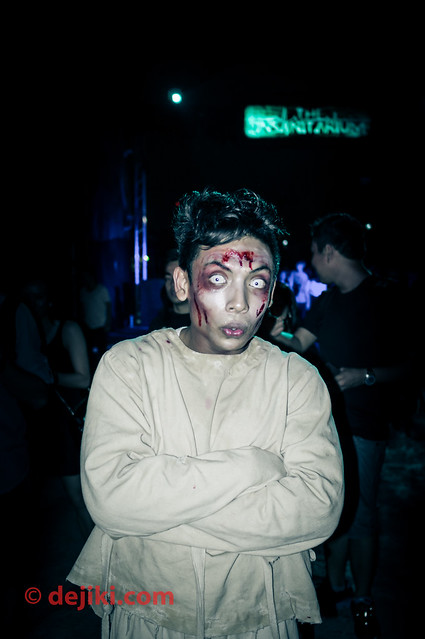 As a second bonus, listen to the haunting area music of Death Alley. Adapted from “Waiting for You” by Bai Guang, from “Shanghai Lounge Divas – The Original Collection”, EMI Records.

That concludes the Halloween Horror Nights 2 coverage on Dejiki.com. It has been an amazing experience to cover the event to great detail – capturing all the moments and scare actors. There is an incredible amount of effort being this massive event and I feel that it should be well documented.

Photos and videos were taken with the Sony NEX-5N + Carl Zeiss Sonnar T* E 24mm f/1.8 ZA. I prefer this combo (compared to Fujifilm X100 or NEX-5N + Sony SEL1855) because it’s a lot faster than the X100, with a manual focus that actually works. The lens is much faster than the SEL1855, in both focusing speed and maximum aperture.

And no, I do not get paid by RWS to do this, or any other Universal Studios Singapore or Marine Life Park related entries, so please stop asking me about that. 🙂