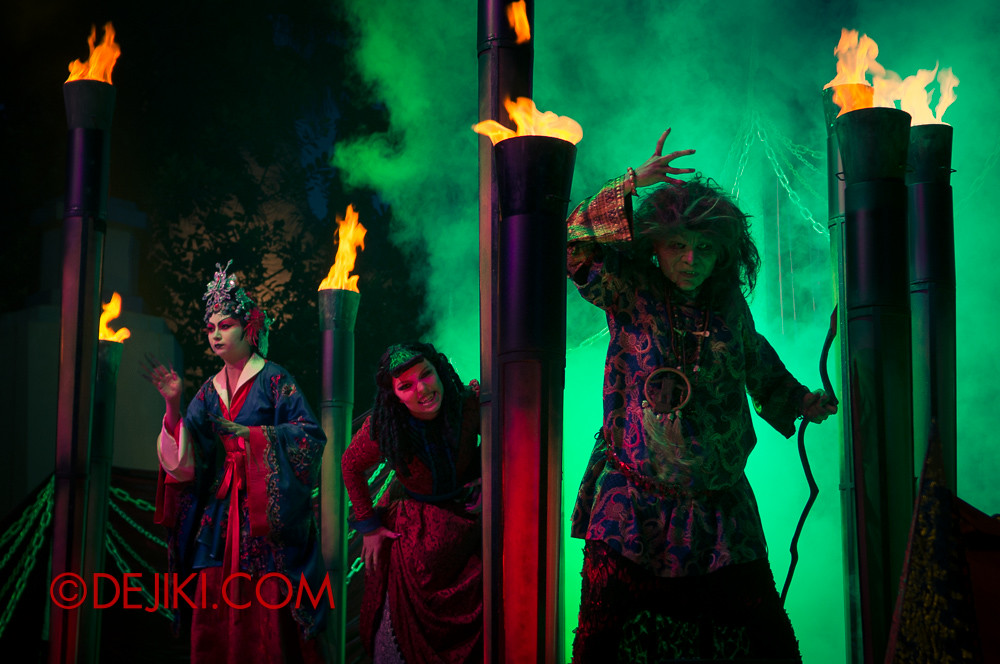 Maiden of the Opera, Daughter of the Undead and Crone of the Forest – three banished witches, reunited at Universal Studios Singapore’s Halloween Horror Nights 3 as exclusive icons to bring three times the evil.

Universal Studios Singapore (USS) introduces three original icons for Halloween Horror Nights 3 – The sister witches were banished from a lost age. They have now reunited across time and space, settling down at Universal Studios Singapore during Halloween Season. The three witches are not here on vacation, but back with a vengeance – casting a spine-chilling shadow over the park with their dark magic. 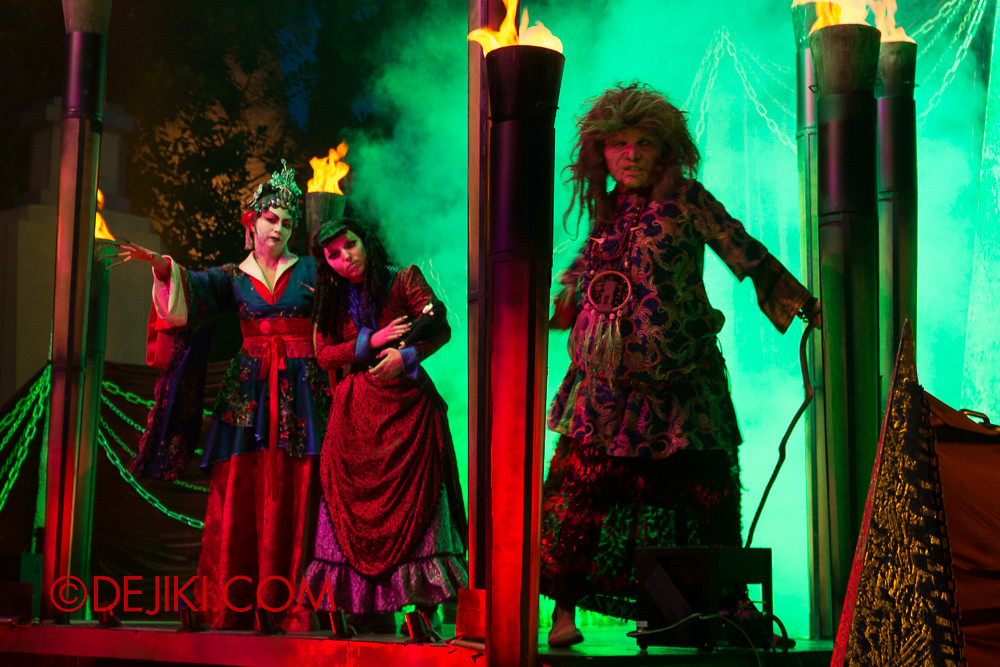 The Story of three Sisters of Evil

Three witches, scattered across different parts of the world and time, are reuniting at last at Universal Studios Singapore.

Maiden of the Opera
The Maiden of the Opera desires to be always seen, heard and celebrated… at all costs. She lingers with her Songs of Death at the Chinese Opera Academy, where she has long held her place as the leading star.

Daughter of the Undead
The child-like Daughter of the Undead has an insatiable thirst for blood. She has raised her league of vampires and now leads the Attack of the Vampires at Whittemore Graveyard, draining the villagers of their lives… and prowling for fresh blood.

Crone of the Forest
The Crone of the Forest lurks in her Forbidden Forest, looking to harvest souls of anyone foolish enough to be lost in the dense jungle next to a Malay village. As the expert in ancient black magic, she has called forth forgotten spirits and enslaved hapless villagers to do her bidding.

As a tribute to this year’s Halloween Horror Nights 3 icons, the Sisters of Evil entry will feature lots of photographs of the three sisters and a video of their dramatic opening show, which happens every evening during Halloween Horror Nights 3. The icons can only be found together at their stage at Hollywood. So enjoy these photos of the Sisters doing things – posing, bewitching, judging and scaring park guests. 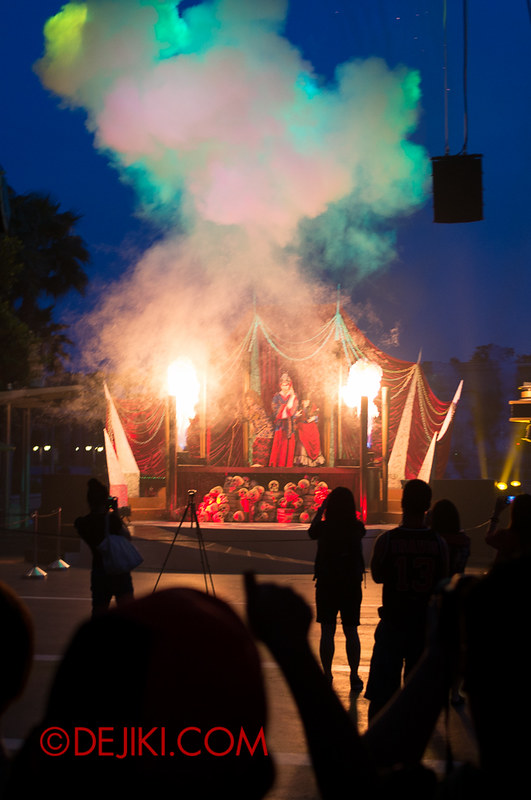 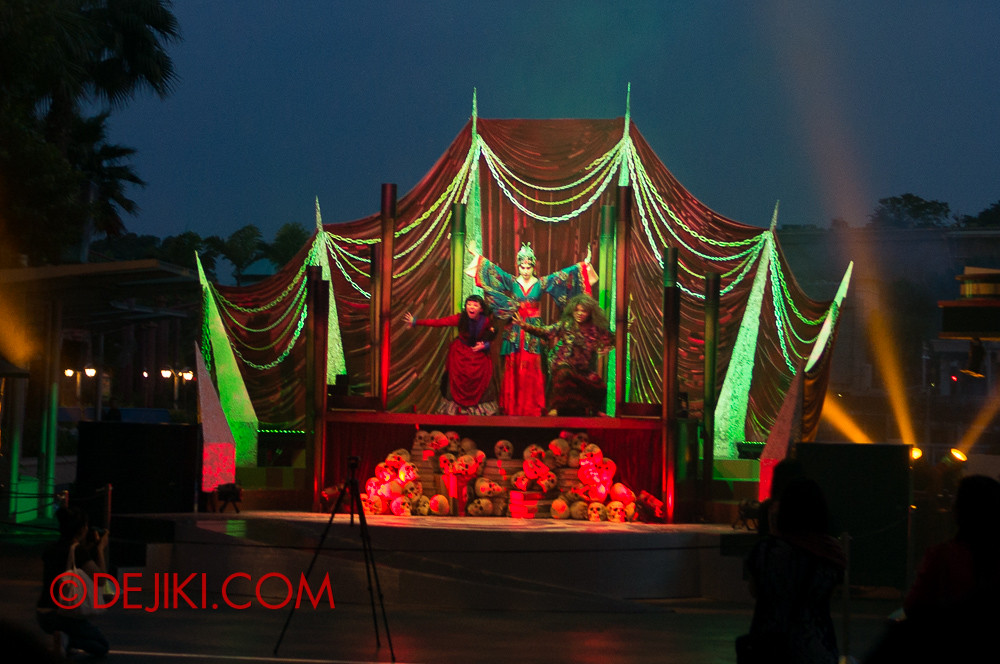 Sisters of Evil opening the park during Halloween Horror Nights 3. Only with this dramatic pose!

The Opening Ceremonies of Halloween Horror Night events are commonly known as “Scaremonies” in the US parks. For HHN2 last year, it was a simple affair of the Puppetmaster opening the doors to his House of Dolls.

Halloween Horror Nights 3 doesn’t do subtle. Every night kick-starts with the Sisters’ grand entrance at Hollywood Boulevard. The trio graciously enters the cage, taunting guests while inside. The cage slowly rises into the air. The covers were dropped and the Sisters vanish – only to reappear on their stage, with a dazzling blaze nonetheless.

Come witness the Sisters’ reign of terror! Please watch in high quality. I tried my best to stabilize the video in post-processing, but it was really MADNESS to keep steady because everyone was getting very excited. I really enjoyed the opening ceremony because it’s totally dramatic and impeccably synchronized with an epic Electro track.

After declaring the park open, the Sisters will stay at their stage, which becomes a photo opportunity spot. 6R-sized photos can be ordered at a nearby booth at $10 per print. Park guests may also have their picture taken for free with their own cameras (park crew would be happy to help). As the three sisters are the most expressive icons so far, taking photos with them is definitely a must! 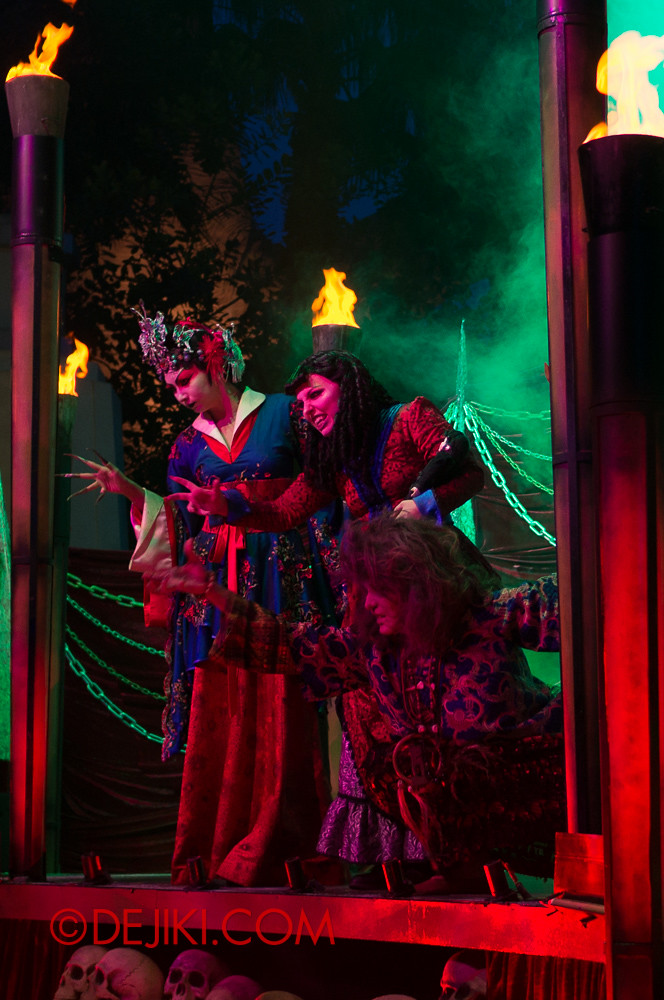 The Sisters have exquisitely elaborate make-up, costumes and accessories. Their dresses are very unique and finely detailed – richly textured and embroidered, they seem crazily expensive and well, crazy. The entire “look” of the sisters shows extraordinarily well as they perform on stage. 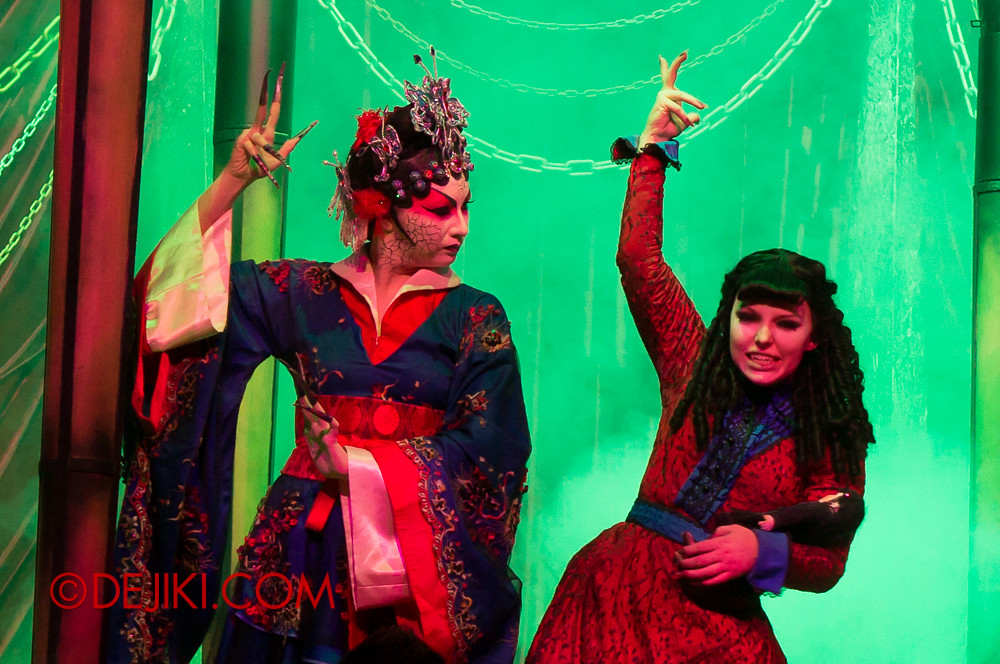 The Maiden’s headdress, for example, have little hanging pieces that would move as she twitches sharply. She also has her unmissable “cracked porcelain” face. There is a reason why she has long nails – find out more in the upcoming Songs of Death photo feature.

The Daughter looks like a doll herself, with her gothic layered dress in deep crimson, contrasted with blue trimmings. She has her creepy doll to play with. 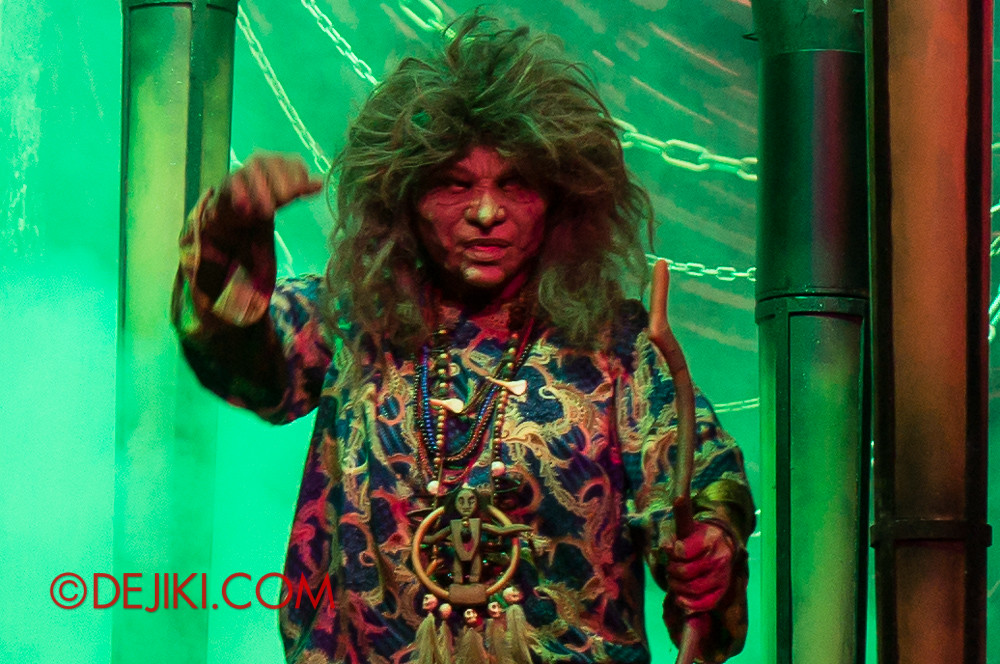 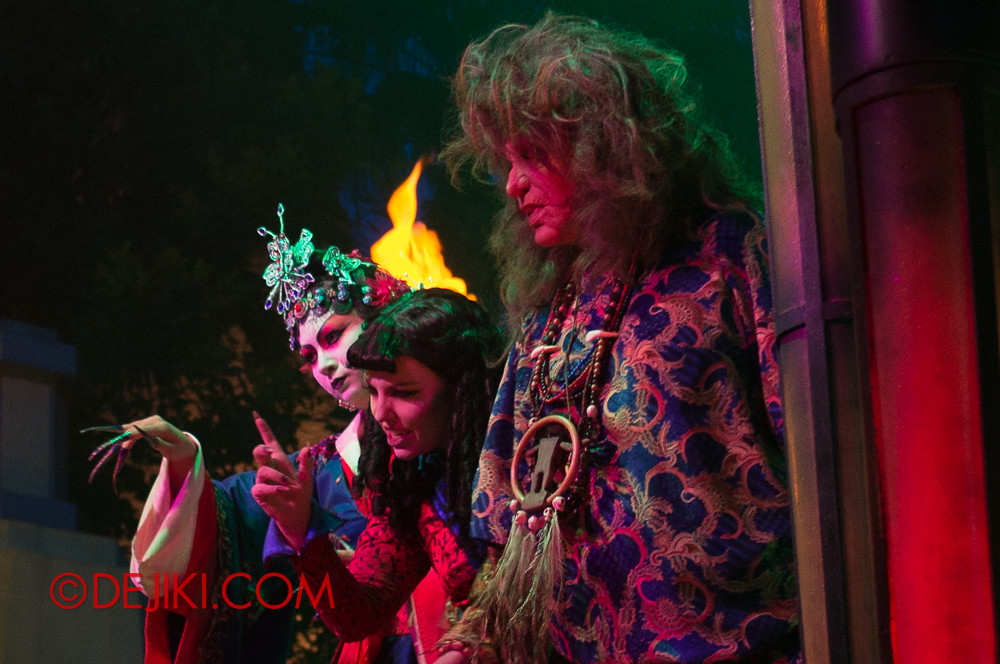 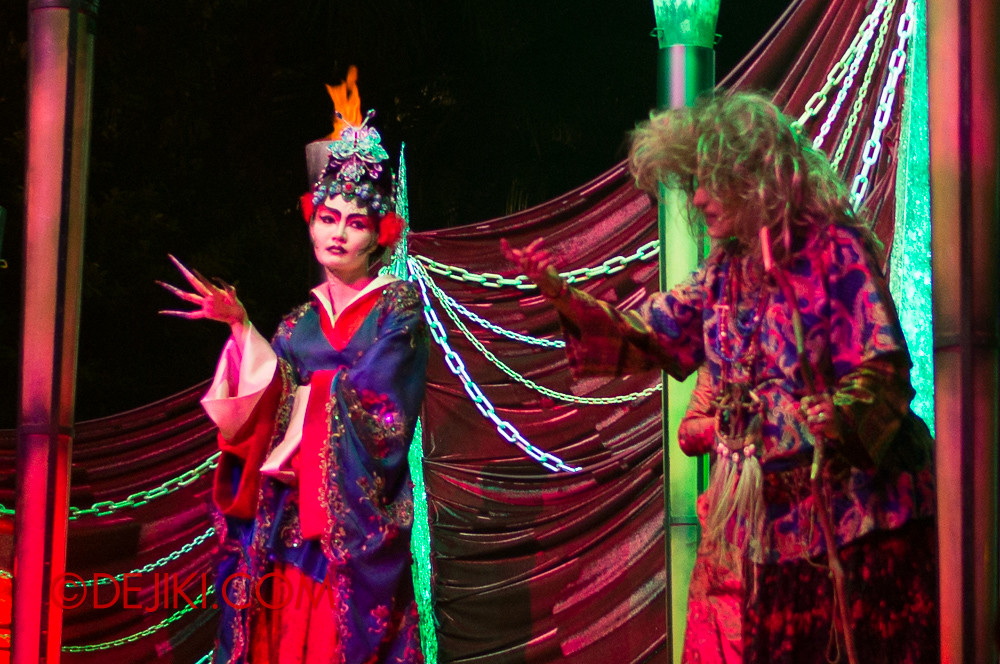 The sisters pose dramatically, often lunging at guests in unison. If there are no victims brave enough to meet them, they will bewitch visitors walking by… 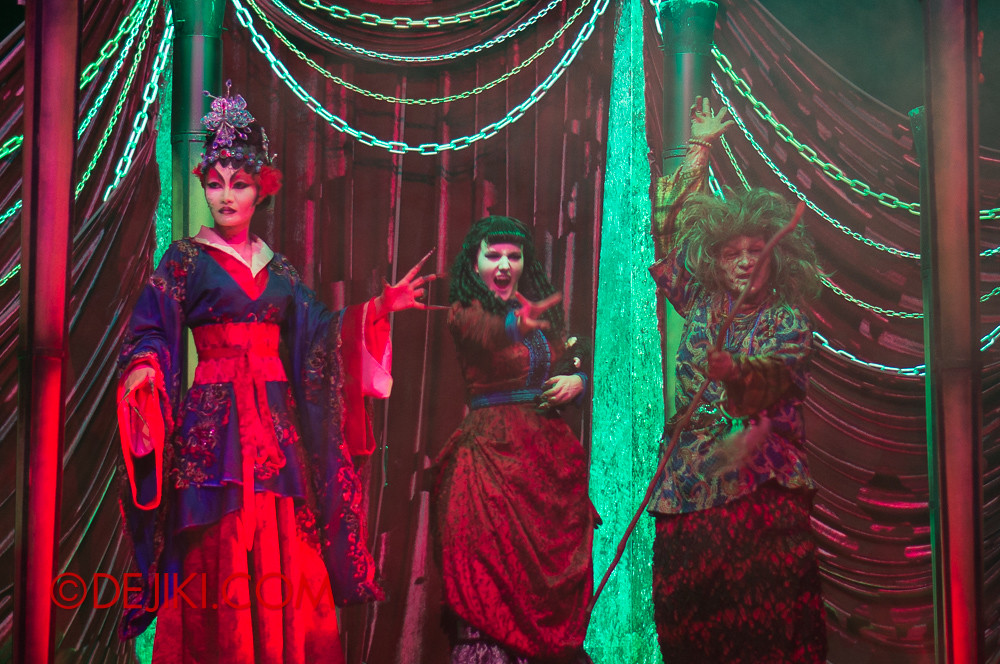 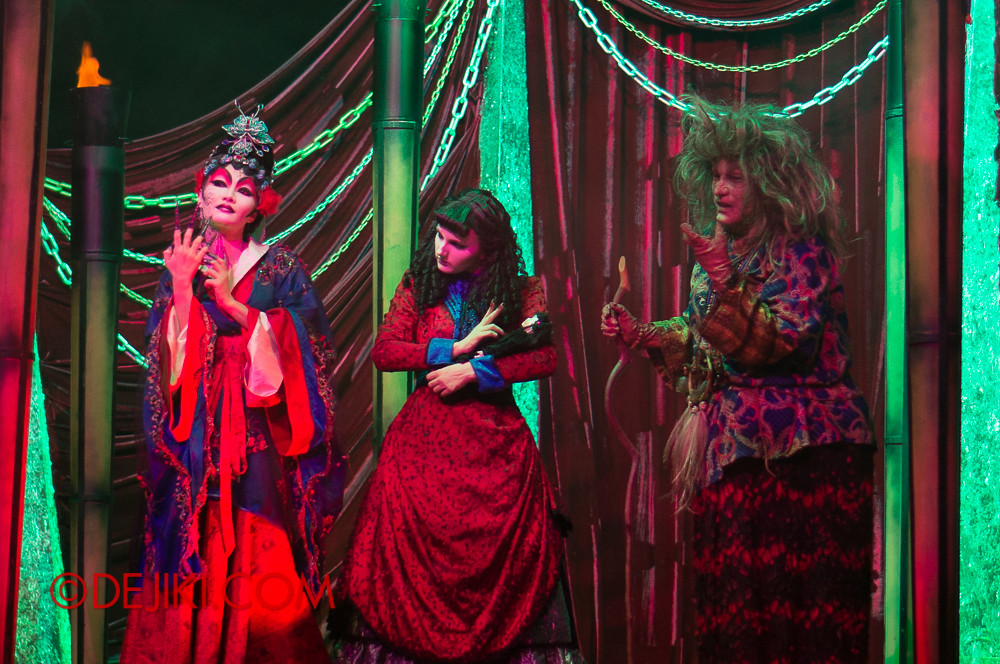 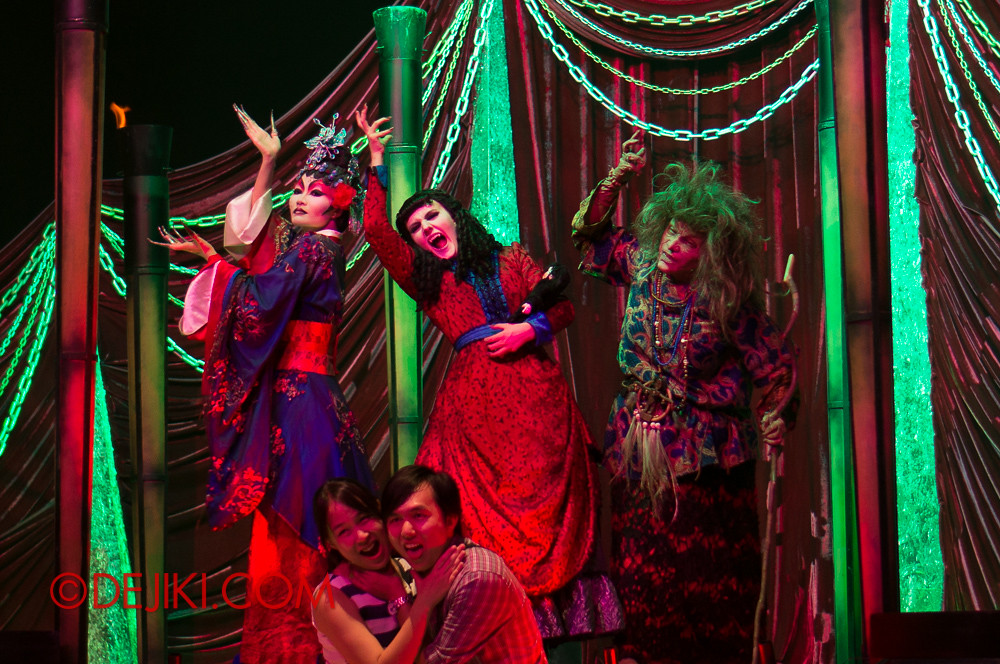 The sisters cycle through a few poses, but I thought this “raising hands” set is probably the best. 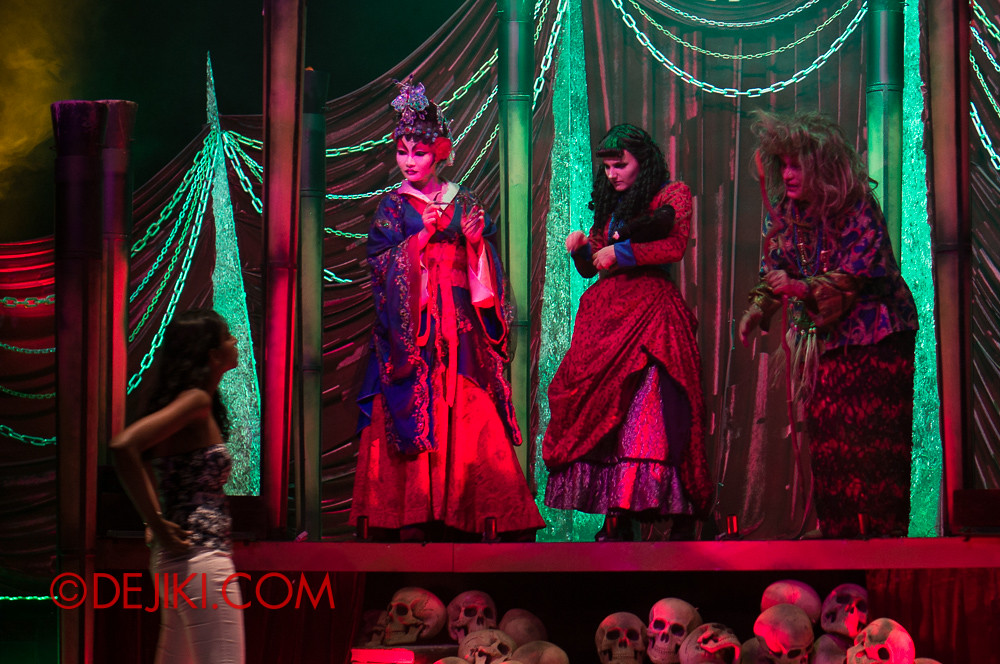 They are often not easily impressed. 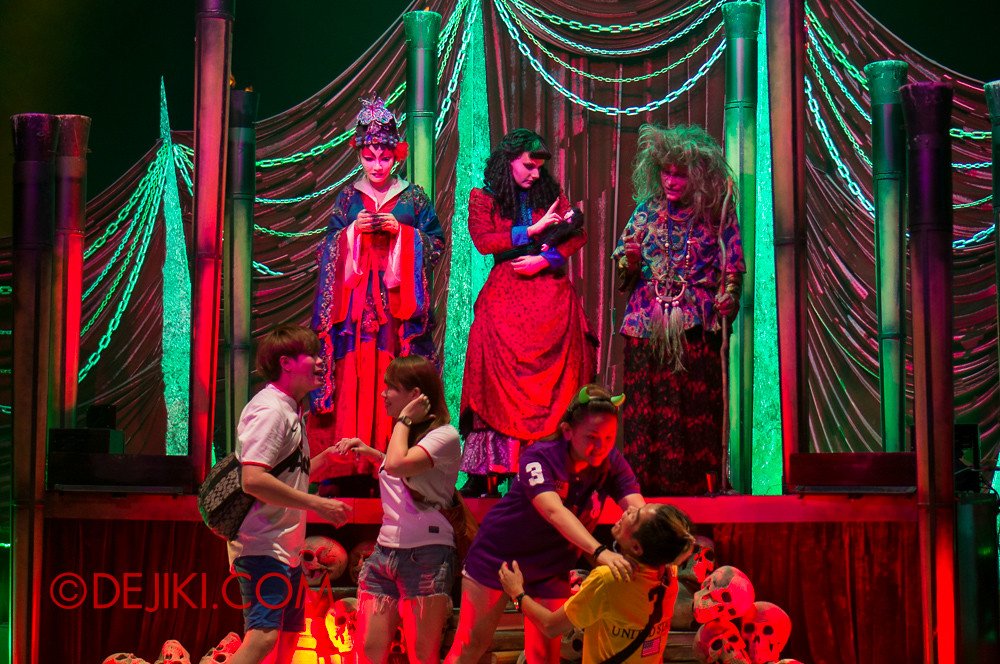 But at times, they are bewildered by what guests do at their stage. 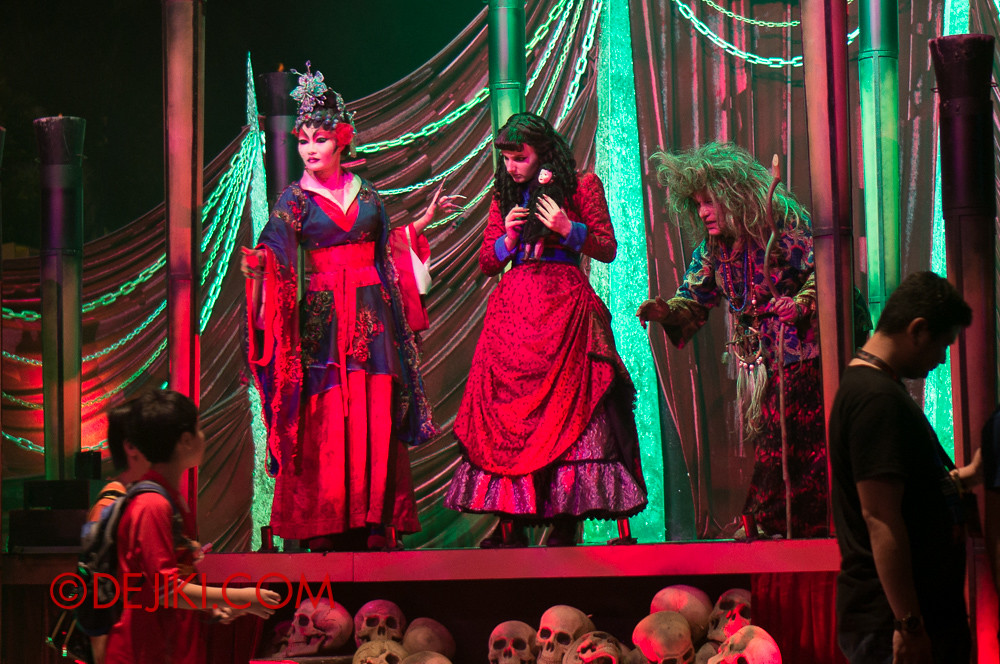 And they are either too happy or surprised when kids want a photo with them. 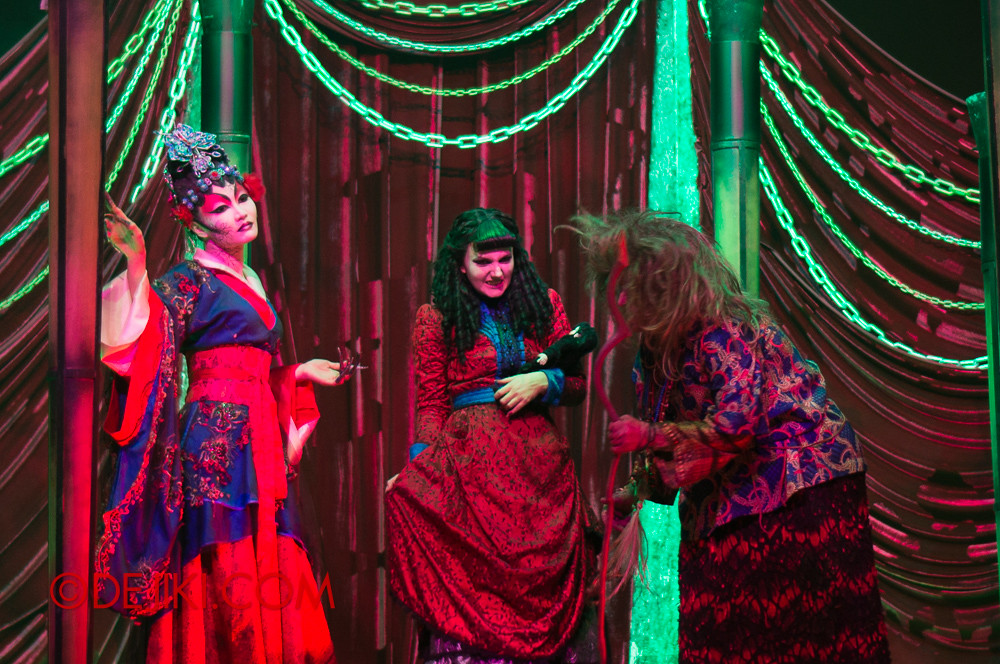 “Who let the children in?” 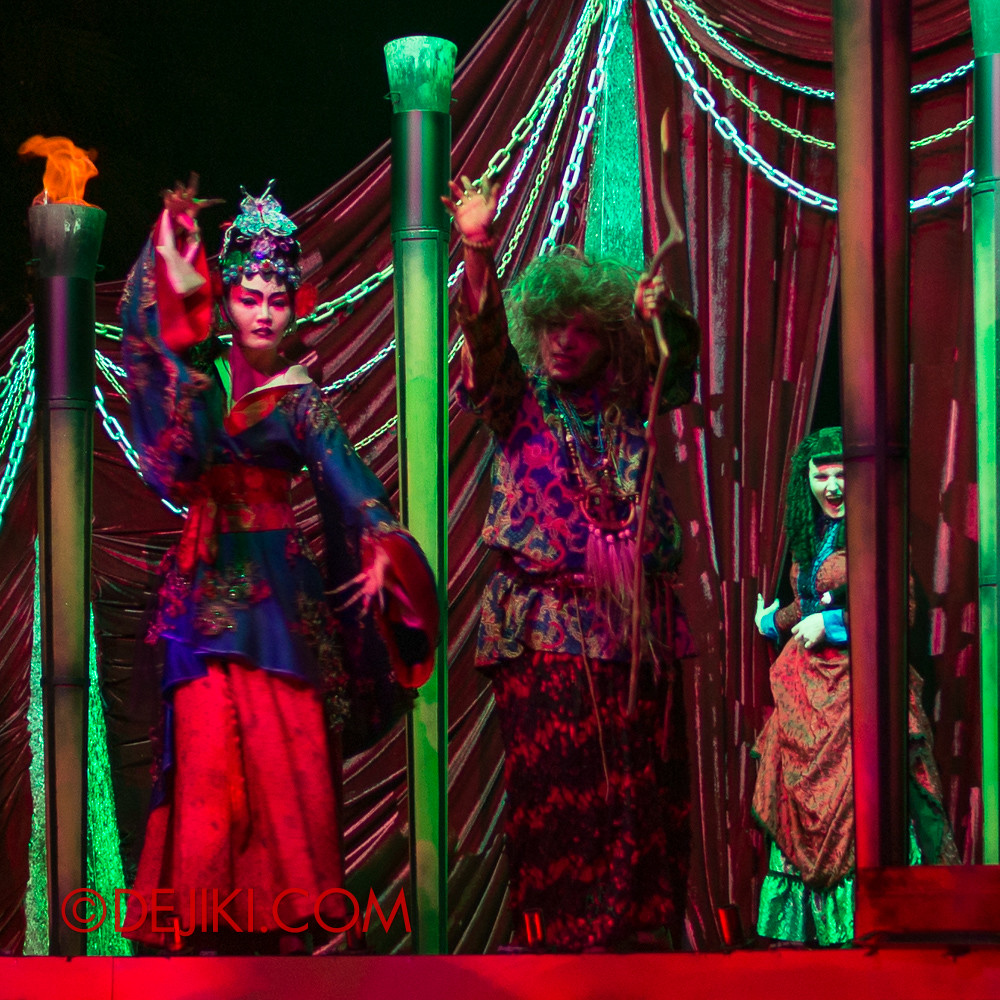 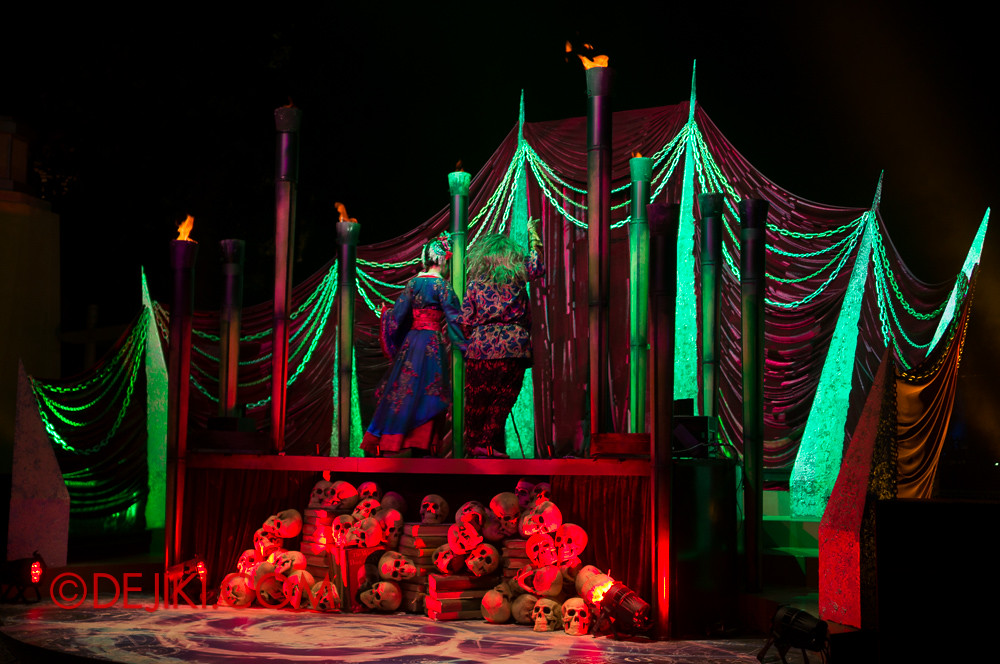 “I’m going back to my forest!”

What’s next?
I hope you enjoyed this entry on the Sisters of Evil. The heavily requested features on Haunted Houses will be published soon.

These will not be complete walkthroughs of the Haunted Houses (that’ll ruin the fun; plus the park will probably hunt me down) but more of a look at the extraordinary theming and other touches that are easily missed if you walk too fast, or kept your eyes shut throughout your journey.

Ready to face your fears?

Brave enough to meet the Sisters of Evil at Halloween Horror Nights 3? Get more information about HHN3, including event hours, attractions and ticketing.