The true adventurers’ port of call, Lost River Delta, is located at the back end of Tokyo DisneySea. This is where lost mystic beings emerge, with their powers untamed. Brave explorers, in search of fame and riches, have set up camps along the river.

Lost River Delta is meticulously themed and pretty much feels like Adventureland Extreme Edition. It has two sections, split by the waterway that runs along the park. Three bridges connect The area encased by the river resembles an outpost and explorers’ village, while the section beyond is a dense jungle set in South America.

Even after visiting the park three times, this was our “quickly run along” area of the park. Regrettably, this entry is another one of those “chop-chop” photo tours; I have to return to Tokyo DisneySea again in the future to get more photos. There is only one reason why we are always running here. We still had no luck with Mystic Rhythms, missing it completely due to showtimes conflicting with our Fastpasses (and desire to get on rides).

We had the Mickey and Minnie Ice Bar during one of the hot afternoons.

Crates lying around an excavation site show a connection to this attraction at American Waterfront.

We heard that the Yucatan Base Camp Grill had some nice dishes, but we ultimately gave this a miss because of our dinners at Magellan’s and Casbah Food Court at the nearby Arabian Coast.

We went on the Steamers 10 years ago. It was a fun experience and must-do attraction at Tokyo DisneySea, but this time we felt that the time spent waiting and on the boat could be better used queuing for other rides. So, why were we here? Read on.

At this point of the line, you can see parts of Arabian Coast subtly blending in.

Tucked beside the queue area for the steamer ride is the ¡Saludos Amigos! Greeting Dock. Here you can meet Disney characters in Latin American outfits.

Anyway, it started to drizzle one afternoon and we decided to take the lazy way to return to American Waterfront.

The only time we decided to take the Steamer, it started to pour. Now this station’s design means that one side (unload) is exposed. Guests, reluctant to get wet, had to run in the heavy rain. Thankfully our queue area is completely covered. What was on our minds at this point? “Have to sit in the middle!! Otherwise will get wet!”

But the rain got so heavy that certain parts of the boat’s retractable roof (waterproof canvas) is collecting water and started drooping. Some parts even collapsed!

The cast members were taken by surprise and well, everyone just stayed back to watch them rescue the boat. Obviously it won’t sink, but the roof kept giving way and soon many mini-waterfalls filled the deck.

Well, they apologized for this sudden disruption and allowed us to leave the queue. In the end, we took the Electric Railway at Port Discovery. 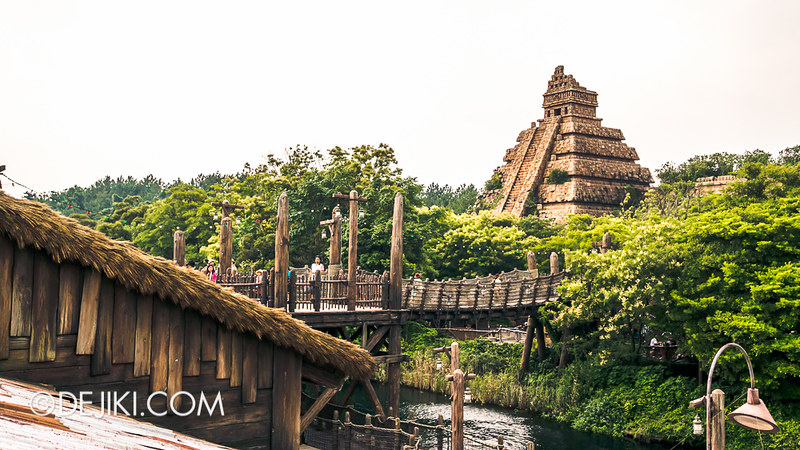 Lost River Delta is definitely built around its crown jewel: Indiana Jones Adventure: Temple of the Crystal Skull. Whenever we were outdoors, the pyramid would be visible, calling us. It’s incredible how this section is designed to allow the temple to be seen, rather grandly, from almost anywhere in Lost River Delta.

Raging Spirits is about an excavation gone slightly wrong. You see, some untrained “archaeologists” attempted to rebuild parts of the altars, but made a mistake: placing the altars in a manner that they face each other. This has awakened the gods. In their anger, they bring wrathful outbursts (literally, with steam and fire) to the roller coaster.

The ride’s track layout is similar, but not identical, to Indiana Jones et le Temple du Péril at Disneyland Paris. The original ride is an Intamin design, but apparently this one in Japan is manufactured by Sansei.

This is Tokyo Disney Resort’s only attraction that goes upside down. As a steel looping coaster, there is a short (and tiny) loop in the middle of the ride.

The grand altar of fire (with theatrical show lighting) has a different character during the evening. There’s something about watching the water and fire on the steps.

Even for an “original” ride, the queue offers an abundance of details to take in.

Even though the ride has an inversion, bags and other items are allowed on-ride.

A quick look at the ride’s station platform.

Warnings of “Intense shaking and turbulence!” seemed uncalled for. I felt that this coaster was very smooth and rather comfortable (even with the excessively padded restraints).

Well it’s pretty hard to see, but the glowing green structure behind the ride tracks is the Altar of Water.

Here’s the ride’s tiny loop, with the Altar of Water on its left.

If you feel unsafe bringing your personal belongings onto the ride, head to the ride exit first before entering the Standby or Fastpass queue.

Deposit your bags and loose items here, then head to the ride entrance. This way, you can conveniently pick up your belongings after going on Raging Spirits.

Lockers may be used for free for up to 3 hours. If you have large bags or bulky items, just store them here first.

A nicely themed change machine at the locker area.

There are several moments I loved while on Raging Spirits. Apart from the tight 360′ loop and other sudden drops, this banked turn that runs under the Altar was rather memorable.

A cloud of fog will form right before the roller coaster runs through this section. The effect is much more apparent at night.

Raging Spirits is a very short experience (1.5 minutes) that runs around itself and a heavily themed “ceremonial site”. It uses rapid pacing and sharp drops and turns, with special effects for an exhilarating adventure. As this park’s “true” thrilling roller coaster, I can’t complain much. Well, I would say that the track section at the top allows guests to look beyond the park’s boundaries, which breaks the “magic bubble”.

Let’s end this photo tour with the Altar of Fire in all its (show lighting) glory.