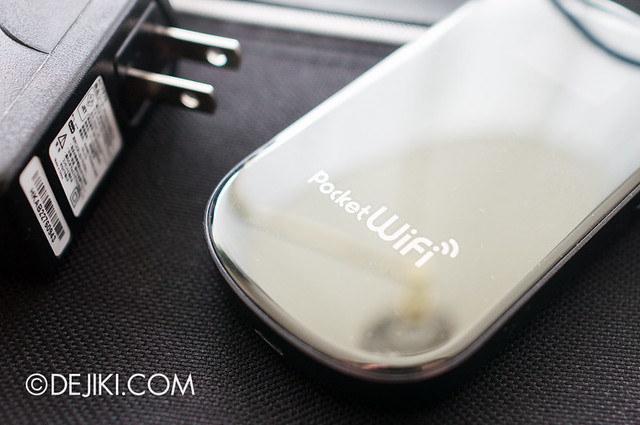 Need internet access for your trip to Japan? I guess a lot of us can’t live without staying connected 24/7 – even though it’s a vacation and you’re supposed to go off the grid. Here’s a short guide and review about the services of a company called eConnect Japan. They offer rental of portable WiFi routers (or Mi-Fi) and data SIM cards.

Even in the world’s most elaborate theme parks, we ended up using our mobile phones to pass some of the time while waiting in line. Having an internet connection is also useful for planning on the go – you can easily check attraction wait times and store/restaurant locations. Or you could use Google Translate App’s powerful features on the go.

This option doesn’t require you to do anything apart from a call to your Telco (or activating via an App). You also don’t need to get or rent anything – your mobile phone will roam on its own. The caveat to accept would be that you usually can’t select the network to use overseas – it’s your telco’s partner.

All three local telcos in Singapore have unlimited data roaming plans for Japan (for $15~20 a day):
Singtel | Starhub | M1 (scroll down)

After last year’s experience with Singtel DataSaver in Hong Kong (no service in Hong Kong until we called back to Singapore to complain), we’ve decided to scrap that idea. Singtel charges S$20 a day for Unlimited Data Roaming in Japan (with Softbank) – that means S$100 for our 5 days in Tokyo – for one mobile phone.

This is similar to the option below, except that you buy a (throwaway) SIM card with pre-paid service: either days or data limit. This will be the cheapest option if you travel alone and only need internet access on a single device. Depending on your needs (one device? a few?) and requirements (nanoSIM is not yet available at most rental companies), this might be a complicated option for some. Some apps (iMessage) may be affected when you switch SIM cards. And not all mobile phones can support all the cellular network standards in Japan. This brings me to the third option.

What we did instead: We rented a Pocket Wifi router (WiFi-To-Go) from eConnect Japan. What is it? It’s a modem and router in one tiny device, allowing you to have a personal mobile hotspot. The connection provided is HSDPA – theoretical top download speed of 42Mbps – somewhat similar to Singtel’s 3.5G service. This option costed us ¥5,650 (about S$76) and it was very convenient to use.

How do you get one? You just need to visit a rental company’s website and place an order. The device and accessories will be delivered to your hotel, or the post office at the airport. 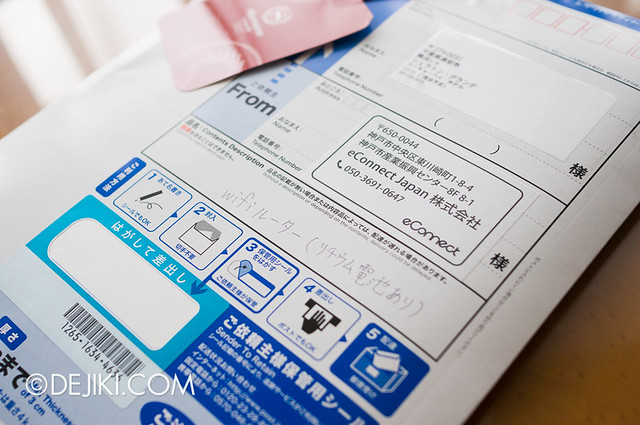 We chose the hotel option to avoid the morning rush hunting the post office at Narita Airport. When we checked in at the Sheraton Grande Tokyo Bay Hotel, we asked the staff about our package. It’s already there (according to eConnect Japan, they deliver a day in advance). 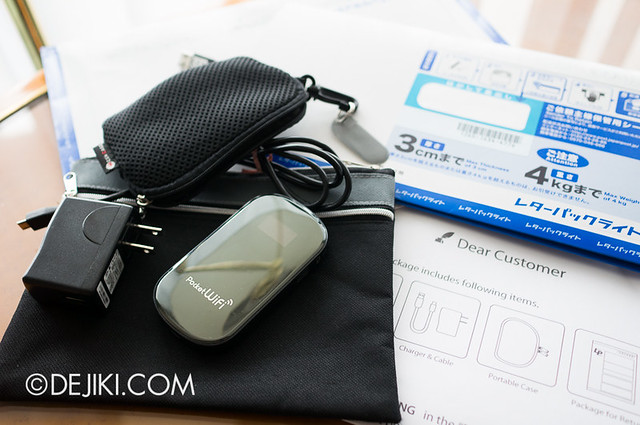 A lot of things inside the envelope: The device, USB cable, a power adapter, carrying case and pouch to hold all everything. 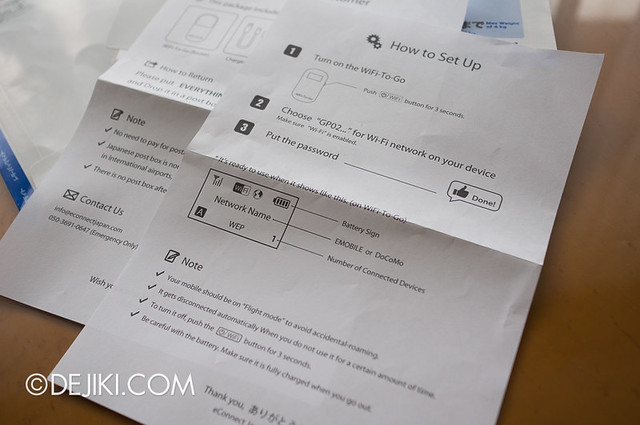 It is ready to use right away. Since we collected this as we were checking in, I took a photo of the instruction sheet, stuffed everything else into luggage and only brought the mobile hotspot device along. To use: Power up the device. Set Wi-Fi settings on your phone. Done.

Obviously, your smartphone should always be set to Airplane Mode while overseas, with Wi-Fi manually switched on. This will prevent roaming data charges from being incurred. 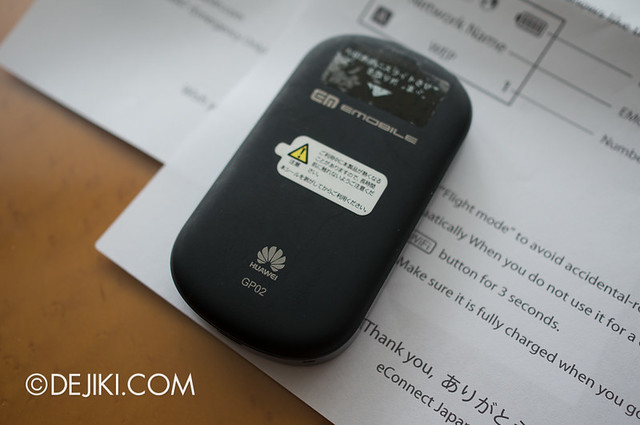 eConnect Japan’s P-420 is actually a Huawei GP02 pocket router. It supports up to 5 Wi-Fi connections at any time. Using it is very simple, since there’s only one button – a power button. All you can do is:

Switch On: Hold the button for 3 seconds to turn it on. Wi-Fi broadcast will automatically start.

Switch Off: Hold the button for 3 seconds again.

Wake up display: Quick press the button. The display goes to sleep to save power, so this will wake it up.

Like HSDPA/LTE connectivity in Singapore, reception is very good when in the open. This is true even for places where there are a lot of people using mobile phones (e.g: parade viewing areas). However, this particular model (eConnect P-420) does not step down to 2G.

Reception in completely enclosed spaces is poor and internet connection may not be available. An example of such places in Tokyo Disney Resort theme parks would be:

In some indoor areas, such as in a street-level restaurant or hotel room, reception is also poor. I had to place the device near our hotel room’s balcony window for better speeds.

How fast is the download speed?
I didn’t benchmark the download (or upload) speed, but it was very responsive – fast enough to load webpages very quickly and could support group WhatsApp conversations with no delay, even with lots of picture uploads. Basically, whenever reception is strong, it feels as fast as the max speed of Singtel LTE.

How strong is the Wi-Fi?
Surprisingly, this tiny thing has quite wide range. At Tokyo DisneySea, my sister was able to get access to the internet around Tower of Terror’s entrance when I was at Toyville Trolley Park. That’s about 15-20 metres. Then again, apart from people walking around, there isn’t anything to obstruct and weaken the Wi-Fi signal.

Take note that the Wi-Fi signal may seem strong on your smartphones and tablets, but the device may not be able to connect to cellular data network. When this happens, you should press the power button to turn off the device’s Wi-Fi hotspot broadcast temporarily – this will save power.

How does it charge?
The device has a built-in battery. It can be charged with any USB battery/portable power supply. It uses a micro-USB plug, and a micro-USB to USB cable is provided.

How long does the battery last?
About 6-7 hours. I unplug the device from its charger at about 6:30AM, and usually it’ll run out of power at 12:30PM~1:00PM. I carry in my bag a 12000mAh USB battery, so after lunch, I keep the router plugged in to that. Technically, I can continuously have the hotspot active for a day or two.

You have to remember to return the device before the end of the last day of rental. Since the package included a pre-paid envelope, just place everything inside (including the papers) and drop it off at any red postbox in Japan. You can also leave it to your hotel to mail on your behalf.

There are many rental companies in Japan apart from eConnect Japan, such as Global Advanced Communications, Softbank and Japan Wireless.

In most cases, renting a mobile internet service overseas can be cheaper and/or more convenient than roaming with your telco. You don’t have to worry about your smartphone/tablet being compatible with the mobile network overseas. The service providers usually also offer customer support in English. One thing you have to remember is to reserve early (at least 2-3 weeks in advance) to secure your set.