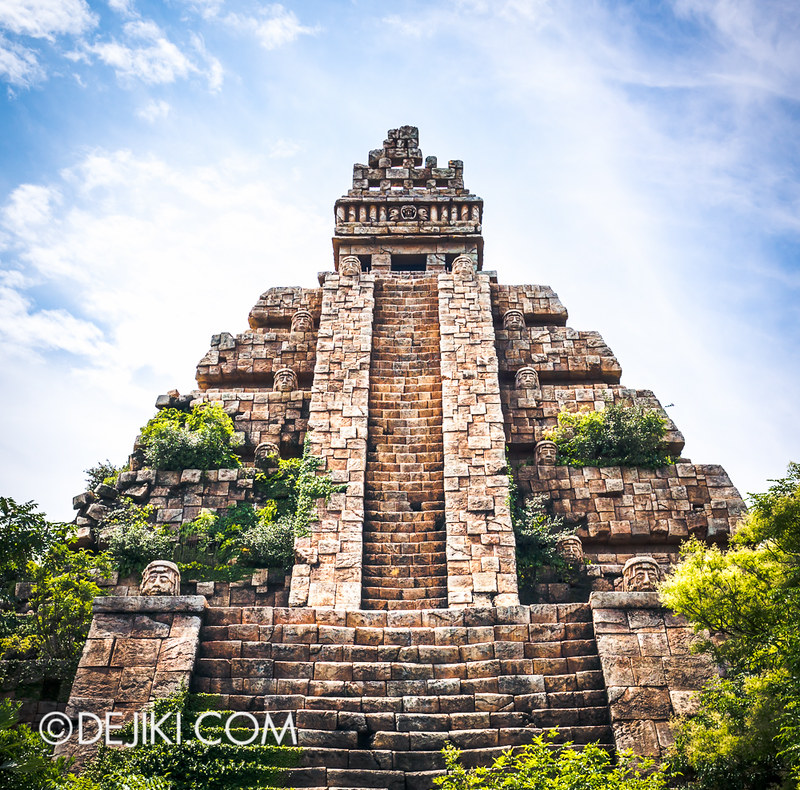 Within the dense jungle of Tokyo DisneySea’s Lost River Delta lies a derelict Aztec temple. Brave guests go on a journey of a lifetime at Indiana Jones Adventure: Temple of the Crystal Skull, where they tempt fate to discover the Fountain of Youth. 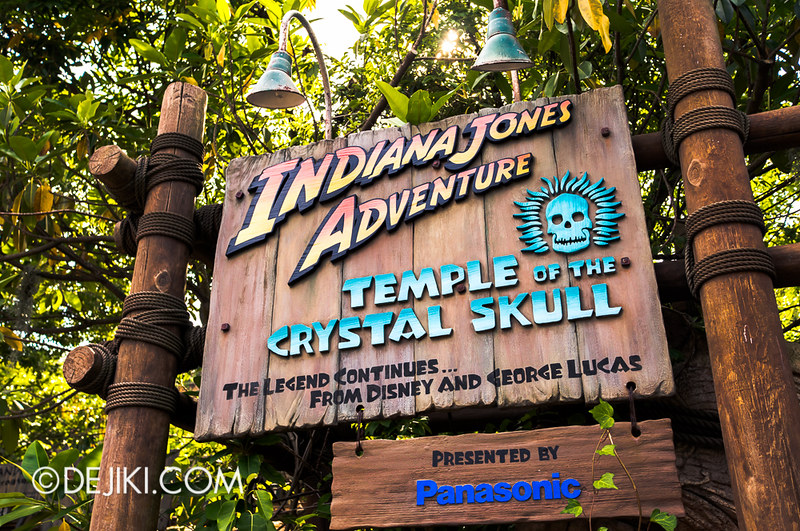 This was my favourite ride in the park when I visited 10 years ago. It still is (along with this ride, that ride, that one, and so on).

This Temple, and the ride, is not related to the fourth Indiana Jones film (Kingdom of the Crystal Skull). The ride opened years before the film. 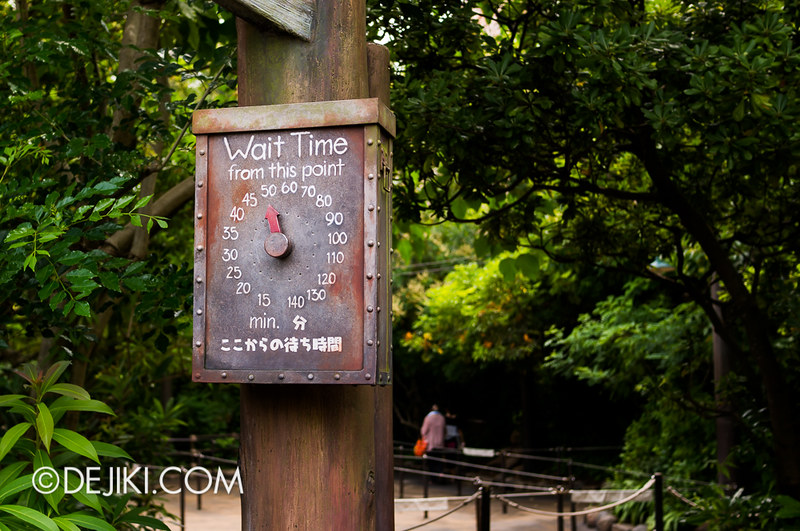 As one of the top rides in Tokyo DisneySea (and the world), Indiana Jones Adventure is very popular and can have wait times as long as 2 hours. 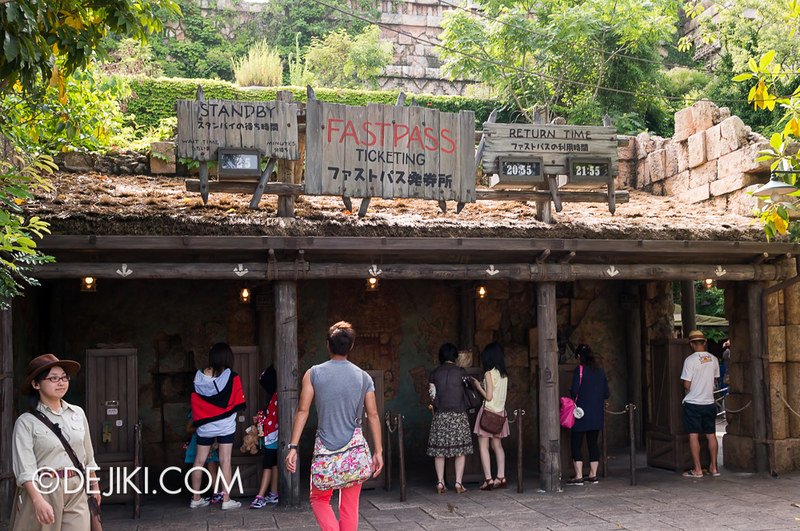 Fastpass is available, and thanks to the competing attractions in the park – it’s a fair game and you don’t have to rush – you can easily get this as your second Fastpass of the day even on a moderately crowded day. 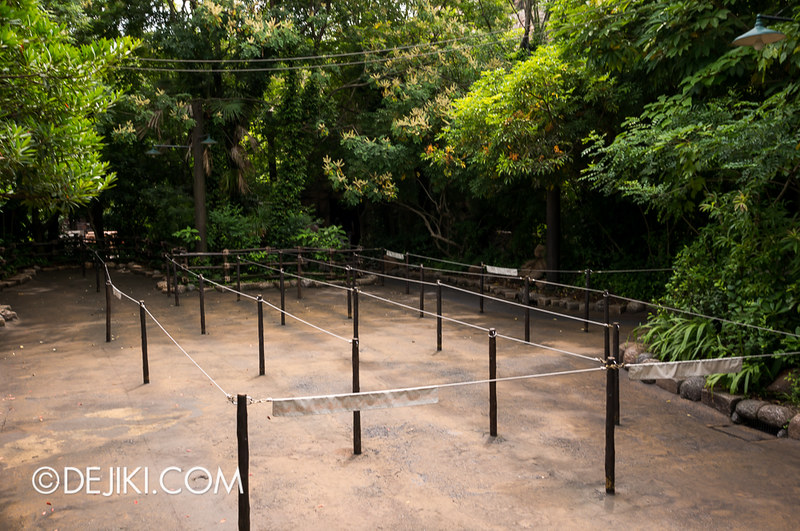 The outdoor queue is quite uneventful and doesn’t really scream an adventure or anything of reasonable excitement. I’ve only seen the queue starting from here back in 2003. 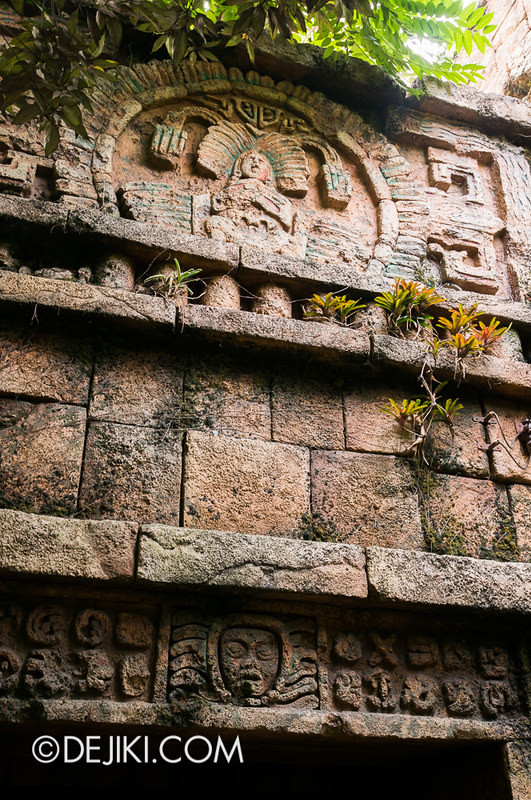 But once you enter the temple, it’s a different world altogether. 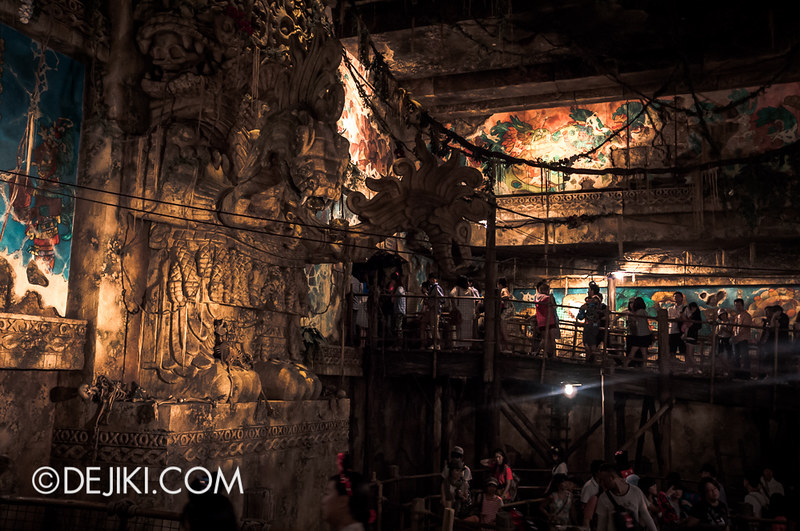 After weaving through a stone few corridors, you will end up inside the pyramid. Yes, that structure (first photo) was not just a fake building. You actually go inside it! 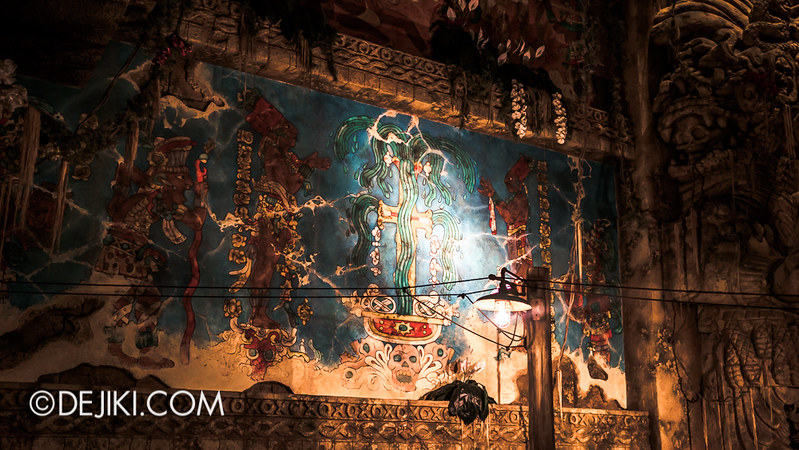 This is theme park theming to the extreme. 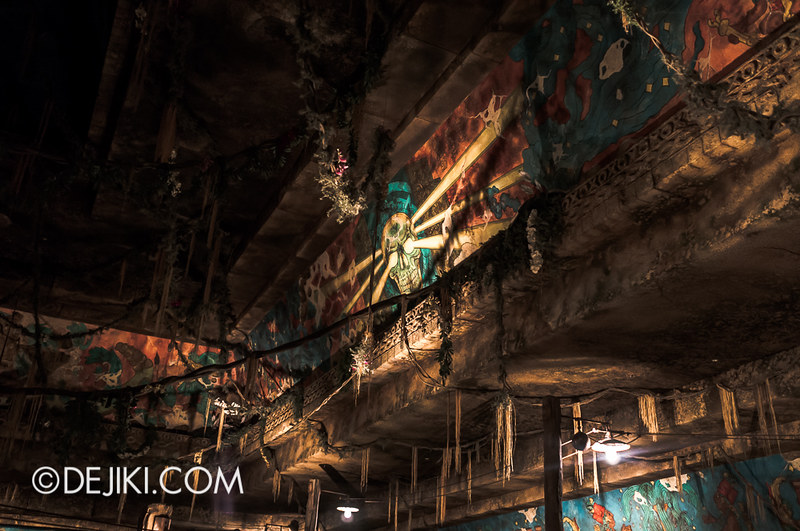 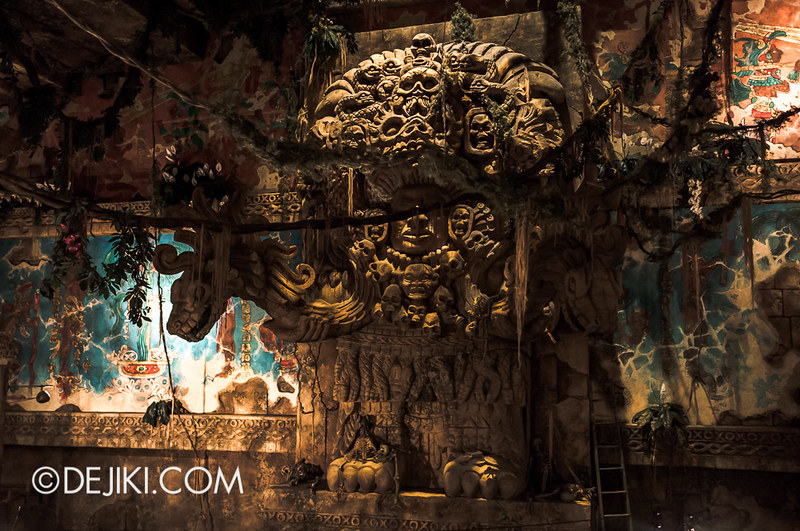 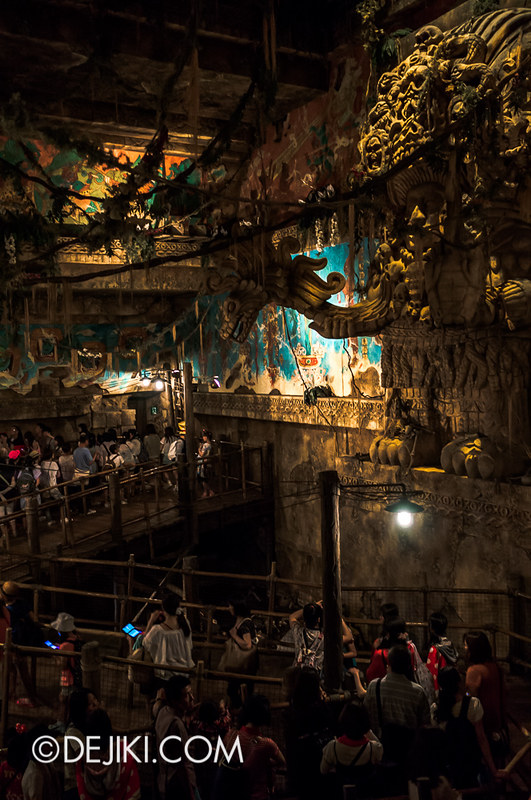 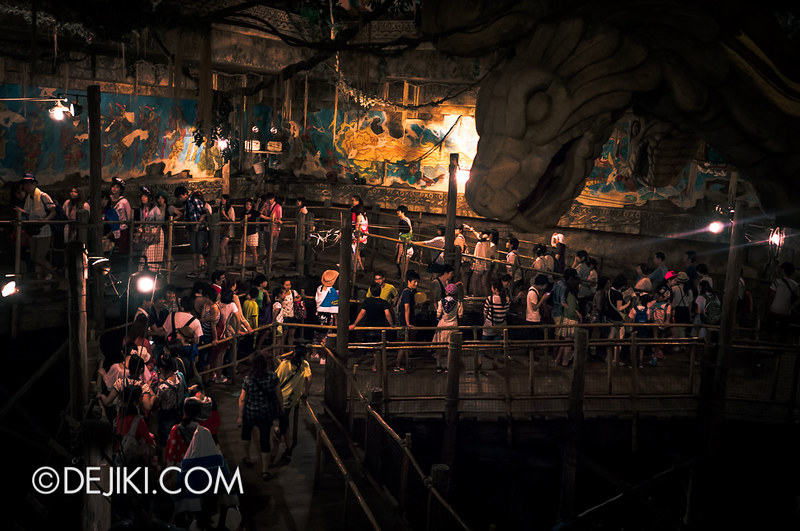 The path snakes around inside the Pyramid, giving explorers an in-depth look at the richly detailed murals and carvings. 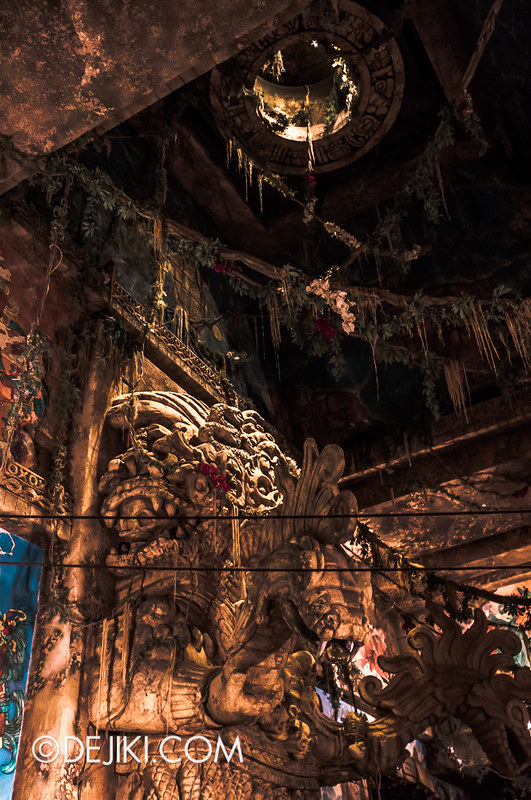 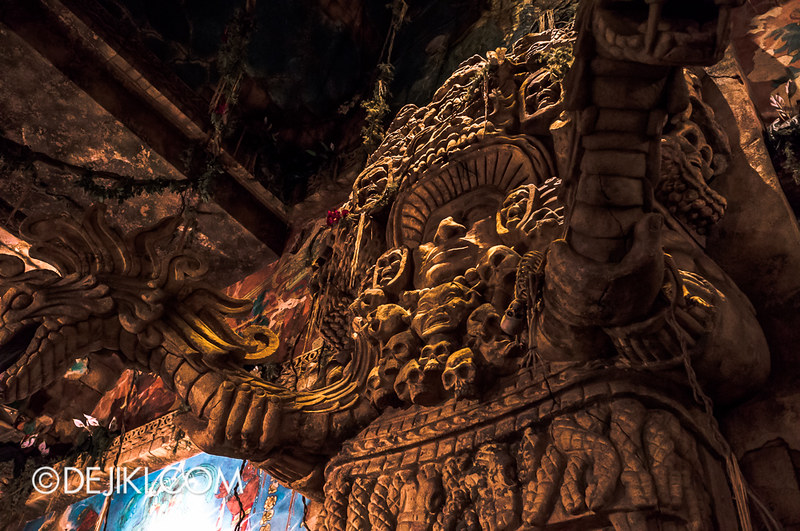 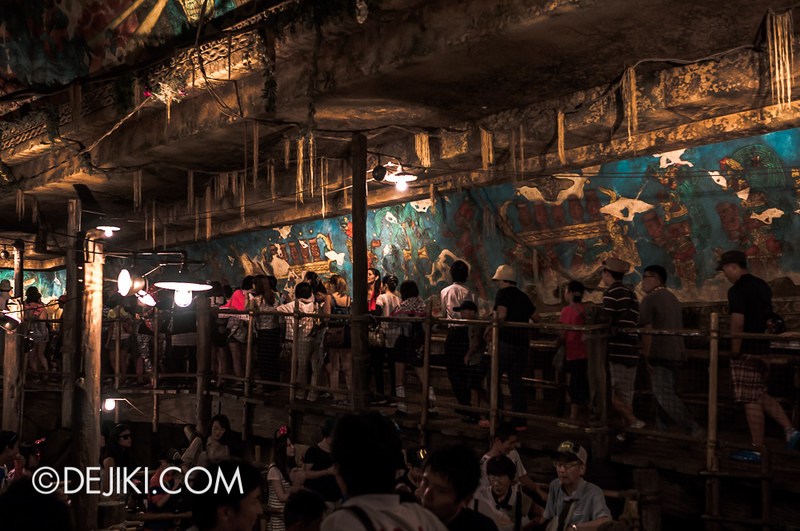 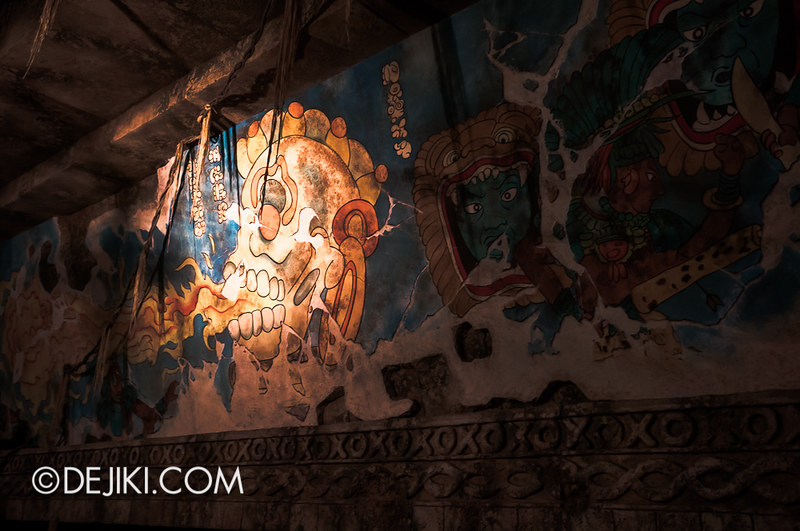 Ancient frescos, ruined by time, tell the story of this Aztec Temple: A Fountain of Youth can be found within its chambers, but be wary of its vengeful guardian – a Crystal Skull. 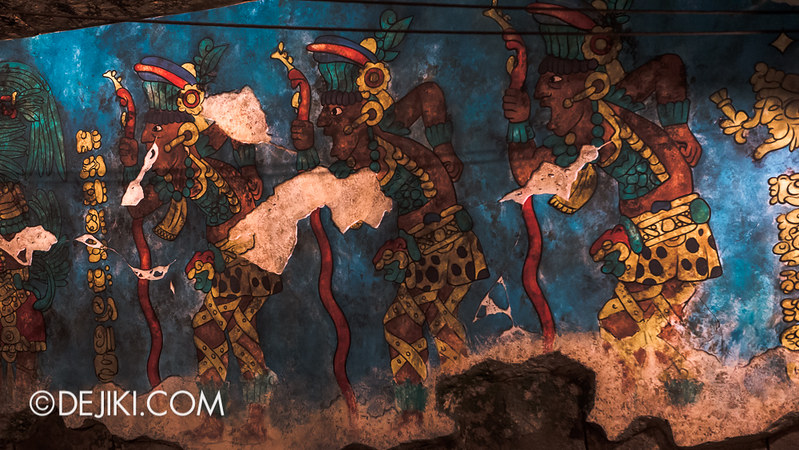 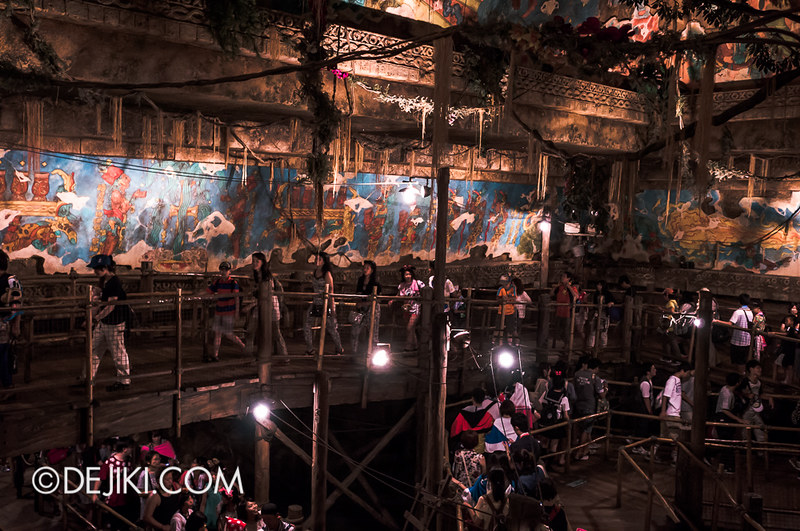 Now you might be wondering about the story of this ride. It’s easily missed because the queue does not litter clues around (unlike Tower of Terror) and the murals only drop hints about the legend of the Fountain of Youth. In short: Paco (Indiana Jones’ friend or assistant) set up a business at Lost River Delta, allowing tourists to visit the lost temple of the Crystal Skull. This was done without the knowledge of Dr. Jones, and with grave consequences. 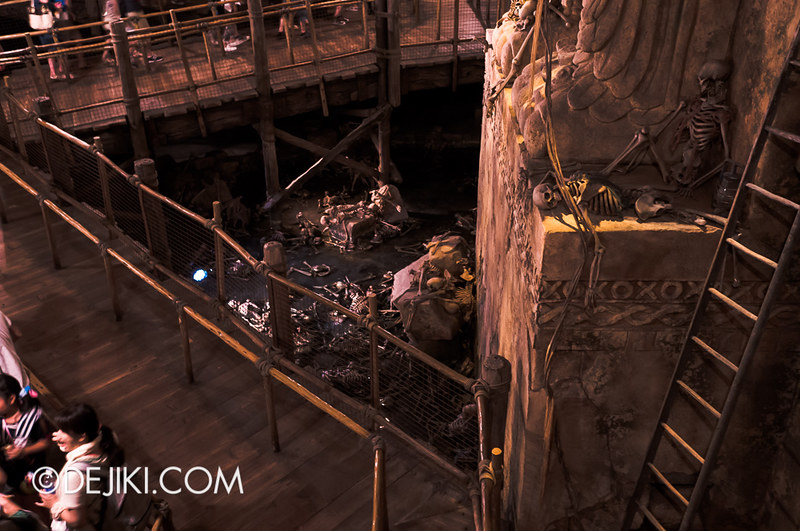 After winding around the Pyramid, the queue leads to the second level of the temple, filled with long, dark corridors. 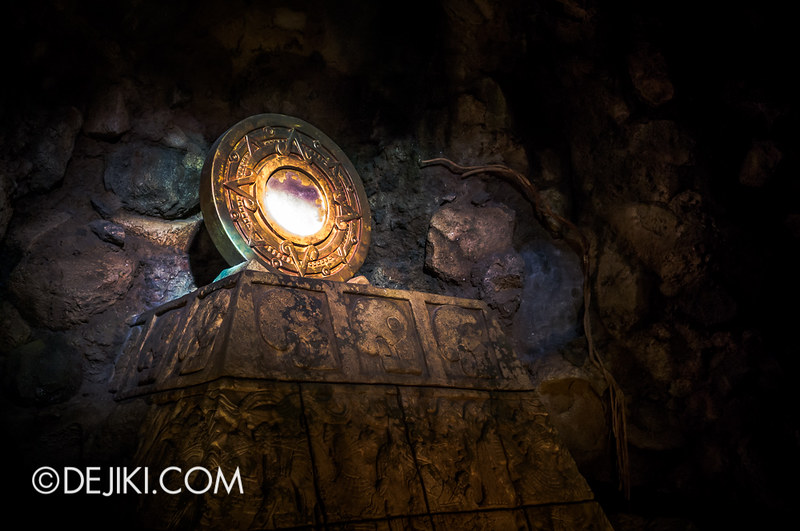 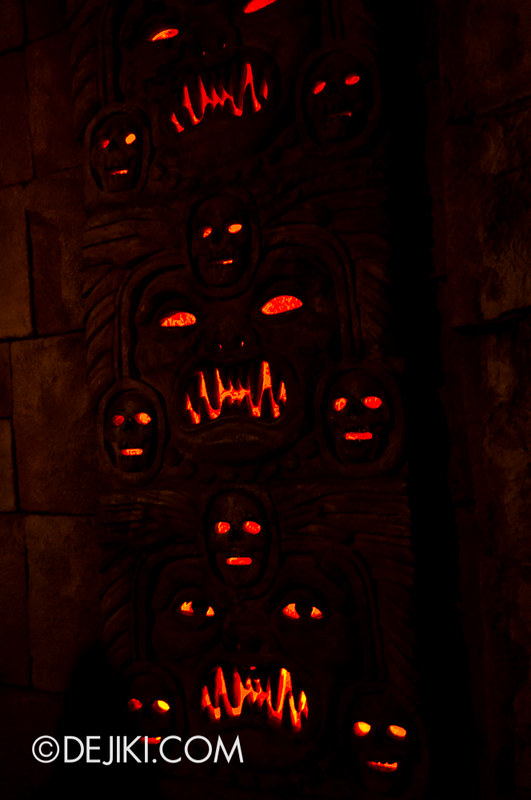 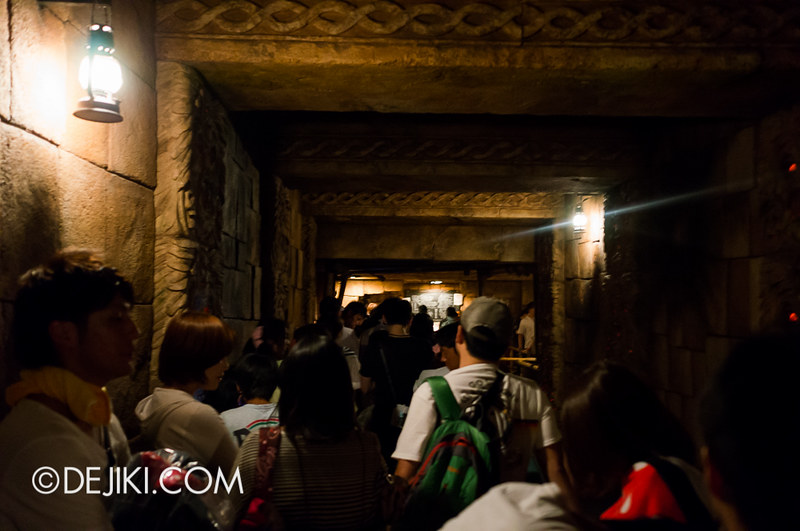 Eventually we arrive at a makeshift outpost, filled with research materials and other equipment. 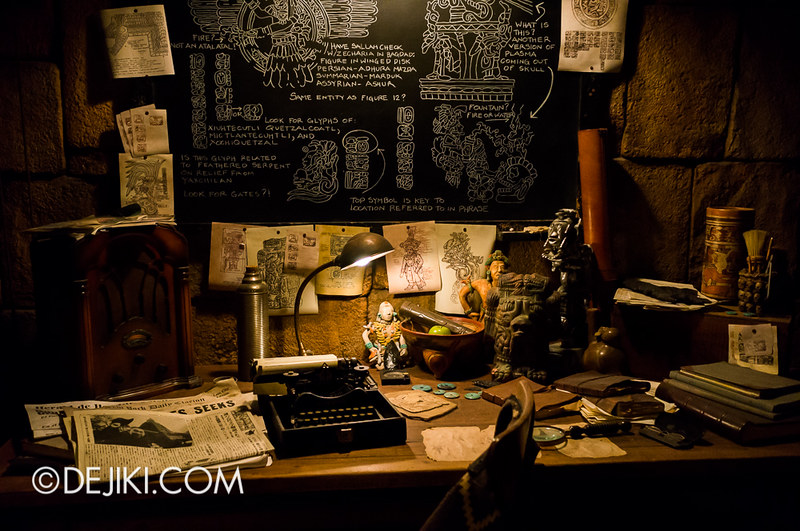 Writings suggest that the Crystal Skull is capable of conjuring fire and lightning. It also shoots plasma out of its eyes. Unfortunately, the Crystal Skull guards the only path that to the Chamber of the Fountain, thus the tour involves sneaking past the Skull in military transport jeeps. 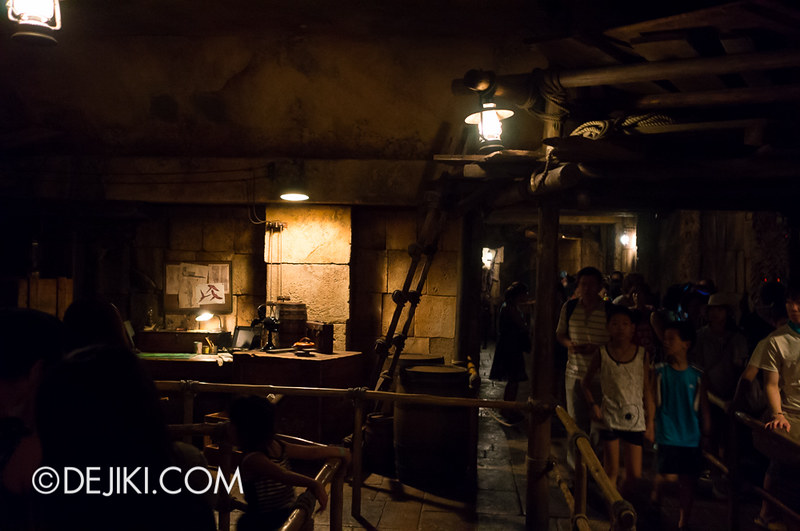 This area is where the Fastpass and Standby lines merge into one. 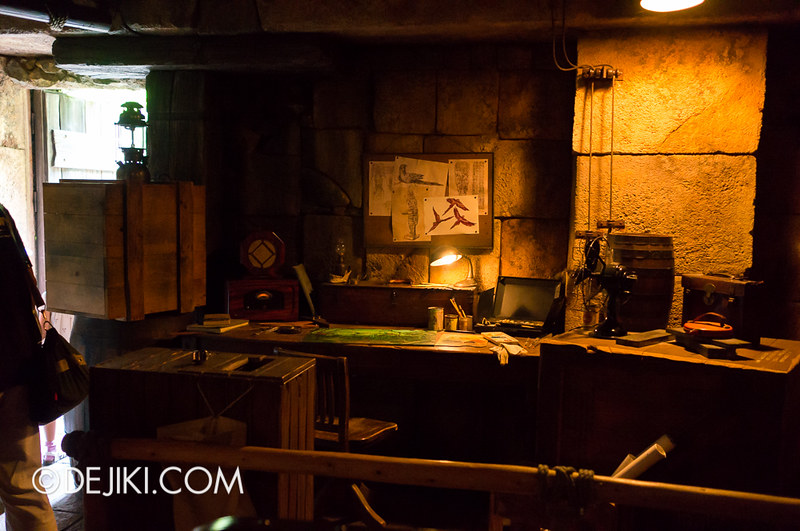 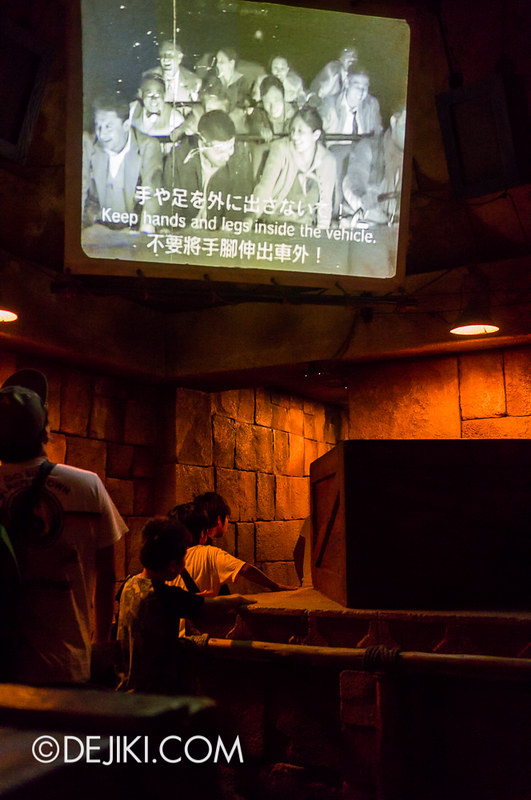 In the last chamber: a video, hosted by Paco, briefs guests with safety guidelines for their tour. 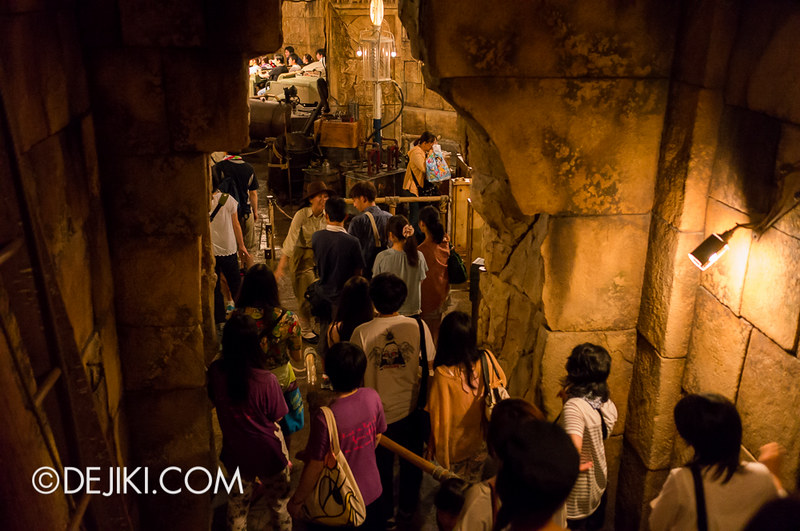 After leaving the transport boarding platform, the jeep slowly turns into a dark corridor. An ornate gate slowly opens and we see the Crystal Skull in the distance. Glowing red, it emits a mysterious growl as the jeep passes elaborately carved walls and columns. As the jeep approaches the skull, it awakes and turns blue, shooting beams of lights. The jeep quickly picks up speed and swerves into darkness.

The transport enters the Tunnel of Torment. Lightning races along the walls, and we finally meet Indiana Jones, who is holding back the Gates of Doom. He struggles to keep the gates shut as the jeep hurries away into another dark tunnel.

A flash of fire greets us at the end of the tunnel. We see a giant skull of stone shooting powerful beams from its eye. The jeep suddenly lunges forward and slides down dangerously, turning away at the last moment and avoiding fall off the cliff…

The adventures are to be continued… in the temple. This ride essentially needs to be experienced in person. No on-ride video or photos come close in representing what this ride really is.

Indiana Jones Adventure: Temple of the Crystal Skull is an indoor dark-ride through an elaborate temple-themed complex. Special effects can be found in almost every moment as the transports weave in and out of the massive sets and dark corridors. It is an experience that just screams incredible at every moment, even at the queue. It cannot be replicated with any type of “3D/4D” ride or projection screens (although the ride does use projections as effects at some scenes).

The transport vehicles do not move very fast, but with its ability to tilt, bank and roll, it creates an illusion that the vehicle is moving faster, and more dangerously than it actually is. Guests will be hurled and flung around like rag dolls throughout the adventure. There are some moments where we felt that we could fly out of the ride vehicles because of its hurling lunges and crazy banked cornering. (This ride uses individual guest seat belts as a safety restraint, and the entire ride will stop should any belt become disengaged). In reality, this is just a faster “dark ride” on an ingenious motion-simulator-on-rails ride vehicle, crammed with lots of special effects and amazing sets. The ride vehicle is also able to change its movement programming, so every ride isn’t really the same. For example, it could stall or slow down at different sections of the ride.

Best ride ever, really. We went on this ride seven times during this trip, I think? Unfortunately this ride, being at Lost River Delta, is at the end of Tokyo DisneySea. As our other favourite rides are at the front and center sections of the park, it meant we spent a lot of energy shuttling around Mysterious Island and American Waterfront.

This attraction is a copy of the original “Temple of the Forbidden Eye” in Disneyland, with its ride layout and general concept of most rooms being almost the same. However, I think the similarities stop there. The Tokyo DisneySea version has a unique story and setting, is themed very differently. The ride vehicles in Japan also use a different technology (electromagnetic actuators instead of the hydraulics) to power its motion platform.

It also has two special effects not seen in the original Disneyland: A swirling vortex in the largest chamber of the Temple, and a fireball shot right at the ride vehicle. 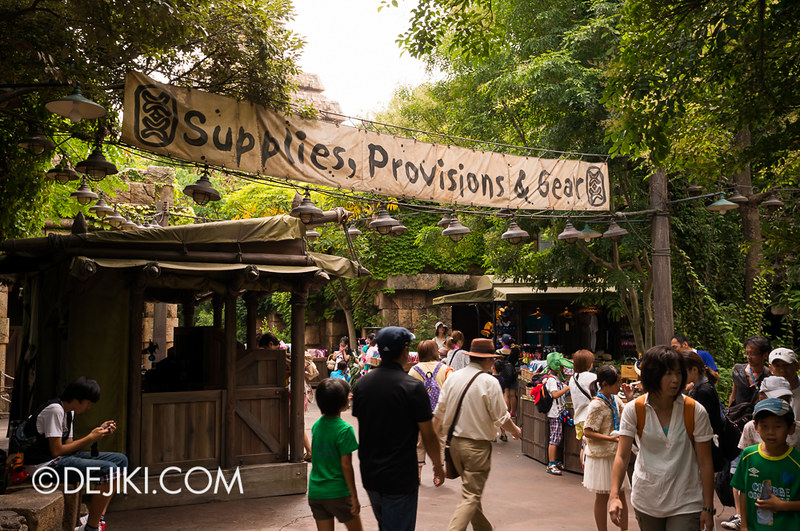 Upon exit, guests may look at their on-ride photos and walk out into an outdoor market selling travel supplies and other Tokyo DisneySea necessities. 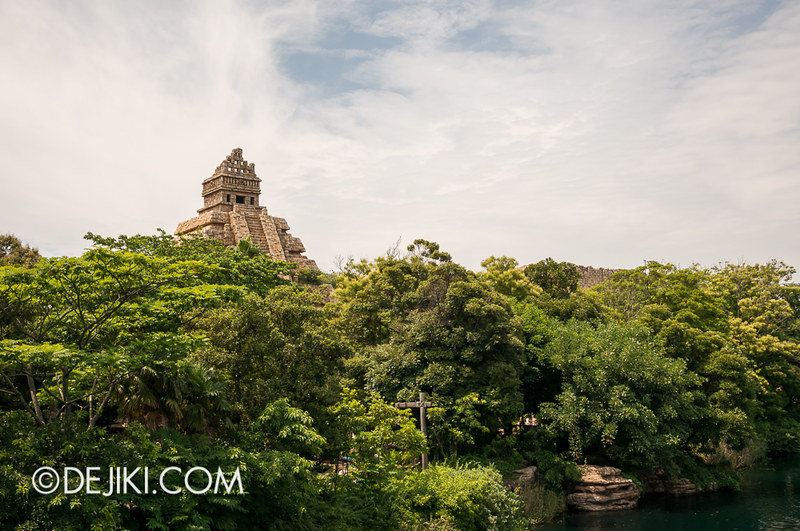 The Temple, as viewed on the bridge leading to the jungle section of Lost River Delta.