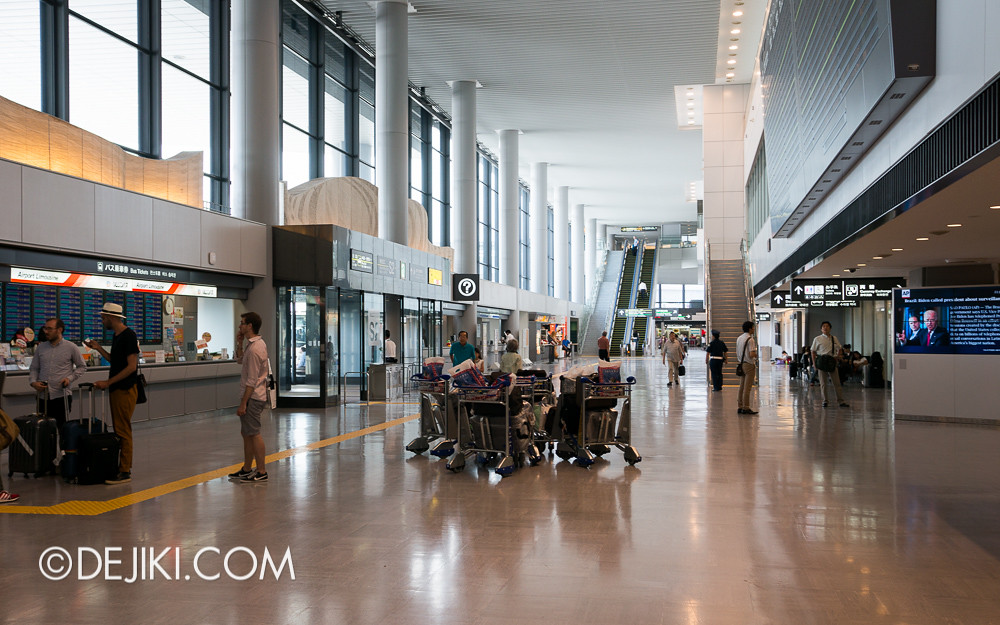 So you’ve finally landed in Japan. How do you get to Tokyo Disney Resort? Here is a photo report on how I got to the resort and traveled around the parks.

Tokyo Disney Resort is located at Urayasu, Chiba – outside of the Tokyo Metropolis area. So despite the branding, it’s not really in Tokyo itself. Good thing is, it really doesn’t matter. The resort is very accessible and the English Tokyo Disney Resort website offers all the information you need to get to the parks, including train routes.

Let me just cut to the chase. While I made preparations to take the train to the resort, I ended up using the Airport Limousine Bus service. I couldn’t sleep on the 7-hour flight to Japan. My economy seat on ANA’s 767 was way too cramped and rigid.

Rail is of course, cheaper, but the walking distances between platforms can be very long and tiring. Not to mention waiting and getting to the correct platform and the right train.

Airport Limousine buses are available from both airports at Haneda and Narita. These are very convenient and comfortable methods of getting to the resort. Despite the name, are more like shuttle buses. There are comfortable reclining seats and a small toilet at the back.

The bus fare for one-way trip from/to Narita airport is ¥2,400 per adult and ¥1,200 per child. This page has all the details on the Limousine Bus service for Narita Airport → Tokyo Disney Resort, including bus timings. The service from Haneda Airport is cheaper, and has more frequent departure times for the domestic terminals.

Where to buy your tickets

At Narita airport, tickets can be purchased from these counters. Just look out for the orange logos. It’ll be best to buy the tickets once you exit customs. Just in case you forget (and to avoid a mad rush and potential queues later)! 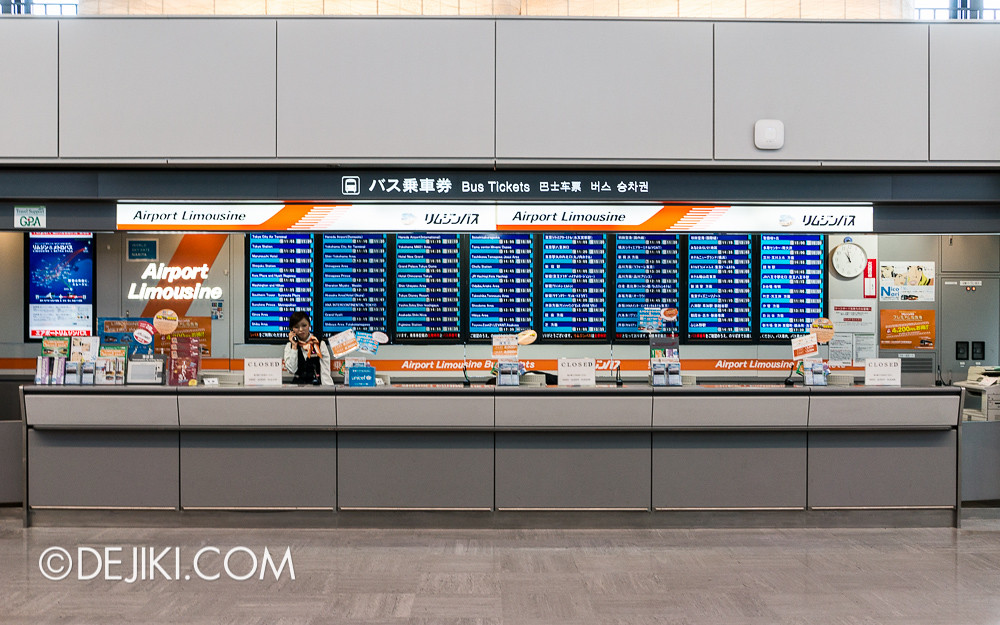 How to buy your tickets

First tell the counter staff which area you’re headed to. So “Tokyo Disney Resort”. Then a specific location: Either the parks’ bus stop or hotel.

The bus will make several stops along the route: Disney’s parks and hotels first, then the Official Hotels – roughly in this order:

When purchasing tickets, make sure that the tickets printed have the right destination printed. Why? The bus does not stop at every point along the route – only to places where tickets are sold for. This makes the journey a lot more efficient. 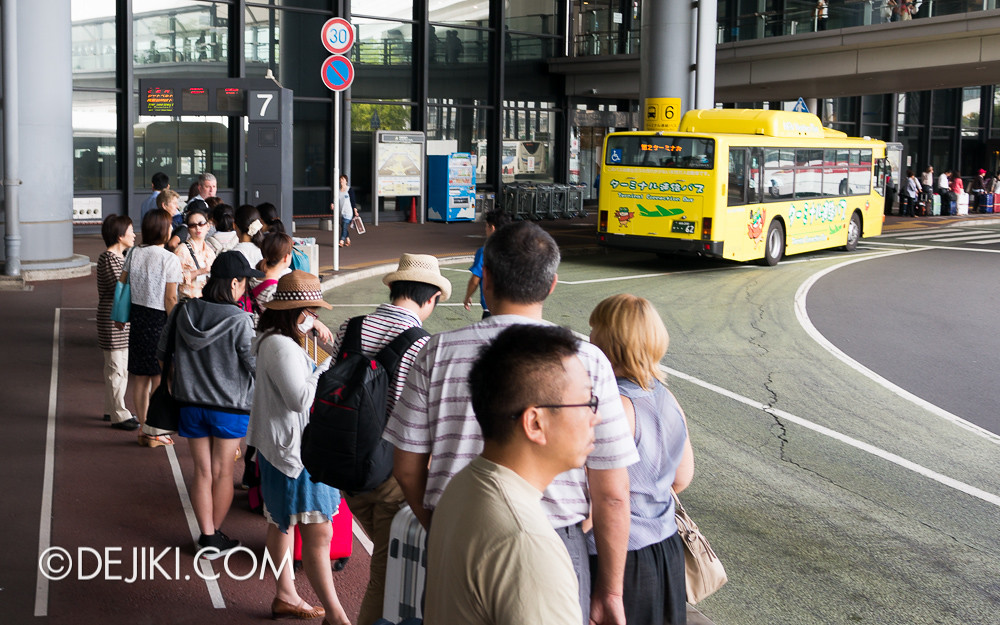 Waiting for the bus

The bus stop (Number 7) is just right outside the ticketing counters for Narita Airport Terminal 1 (South Wing). You just need to be here about 10-15 minutes before the bus departure time. While waiting for the bus to arrive, the airport staff would check tickets (to make sure you’re waiting at the right place). The staff would also tag your luggage and hand out claim checks. 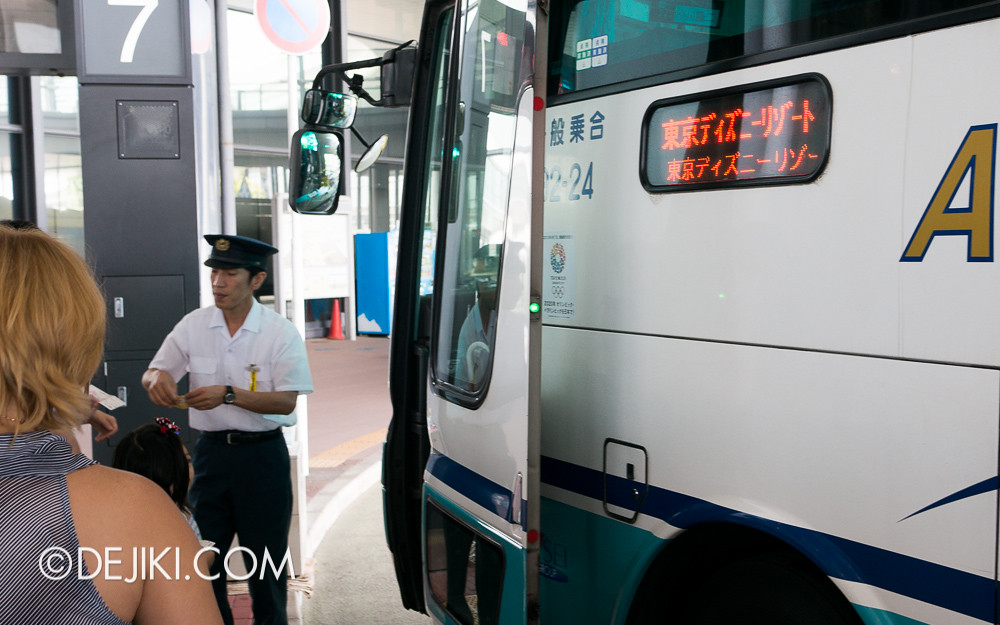 The bus captain checks every passenger’s tickets before boarding – and by collecting ticket stubs, he plans the bus route. Later, he will only retrieve the right luggage when a passenger is leaving the bus. It’s very efficient and quite reliable – he is quite serious about the claim checks. 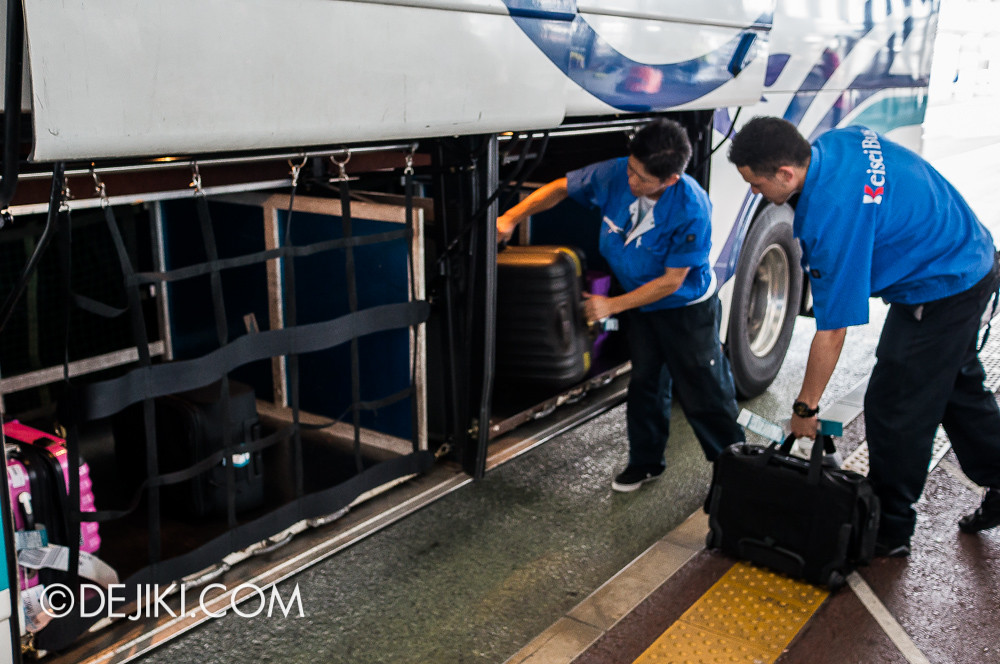 Although the Airport Limousine website said the journey will take up to 90 minutes, we arrived at our hotel in almost exactly an hour. 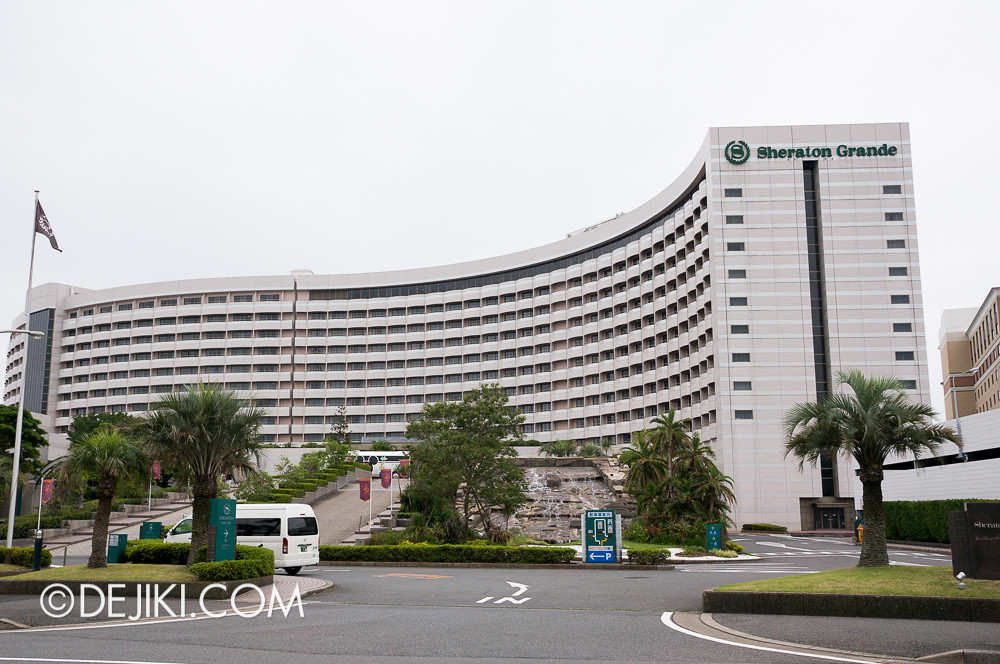 Sheraton Grande Tokyo Bay Hotel – our hotel for this trip. I don’t have a lot of photos of this hotel, because the only time we were at the hotel is either: 1. Breakfast rush or 2. Going back to shower and sleep after an exhausting day at the parks.

This is a nice hotel that has been on the resort for about 25+ years (according to their banners). Some people on Tripadvisor said the hotel is aging, but I think there was a recent renovation. Our room was very spacious (frankly, this is like a single-room suite) which will be a pleasant surprise if you’ve stayed in the any hotels in Tokyo city.

Notable things:
1. The wash basin and mirrors are outside the bathroom. Very convenient because someone can shower while another can do her make-up (haha).
2. Our room had twin beds, and being a resort/family hotel – the beds are really huge and could actually accommodate two people each.
3. There’s the usual water boiler, plus a coffee machine (!)
4. Nice selection of instant drinks and ground coffee powder. Free bottles of water daily.
5. Full HD Television!

Hotel Breakfast
My hotel stay came with buffet breakfast, so we were given a choice of the hotel’s four restaurants every morning. The Grand Cafe is the most popular choice as it has the widest range of food, but be there within 20 minutes of opening (usually 6:30AM) or there’s going to be a line that moves REALLY slowly. The breakfast package, which at first seemed like a luxury, became somewhat important – we didn’t have to worry about getting breakfast (we would, if we stayed elsewhere) and the early opening time got us on track for the morning. We just went down 10 minutes after they opened, gobble whatever we can for 30 minutes, and set off for the parks. No mess, no fuss.

1. You can buy park tickets from the hotel, or exchange ticket vouchers from a travel agency there. We did this as we checked in.

2. Apparently tickets issued by Official Hotels (and Disney Hotels) are guaranteed admission to the parks even if the gates are closed when the parks are reaching maximum capacity.

3. Disney Resort Cruiser is offered for free. This is a shuttle bus service between the Hotels and the nearest Monorail station, Bayside Station.

4. Some Official Hotels may offer their own complimentary shuttle bus service to certain places around the resort area (such as Hilton Tokyo Bay Hotel → JR Maihama Station) which could also save time and energy.

Apart from “Official” and “Disney” Hotels, there are also “Partner” and “Good Neighbor”. The last two categories offer their own complimentary shuttle bus service (some may require reservations), but nothing is as good as staying at the resort.

Getting around Tokyo Disney Resort

If you stay within the Resort, both theme parks are just 10-15 minutes away, thanks to the monorail. 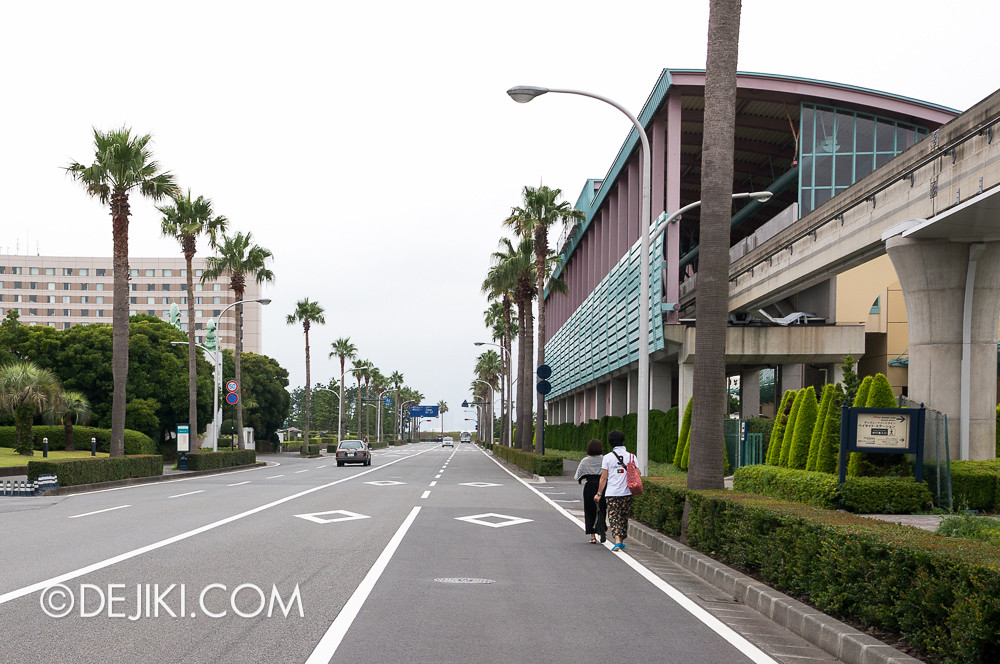 This is the “Hotels” station of the Tokyo Disney Resort line. If you’re at any of these hotels: Sheraton Grande Tokyo Bay, Hotel Okura Tokyo Bay or Hilton Tokyo Bay Hotel. You’re in luck – the station is within walking distance, and by that I mean it takes you only 3 minutes (!) from the Hotel lobby to the station. 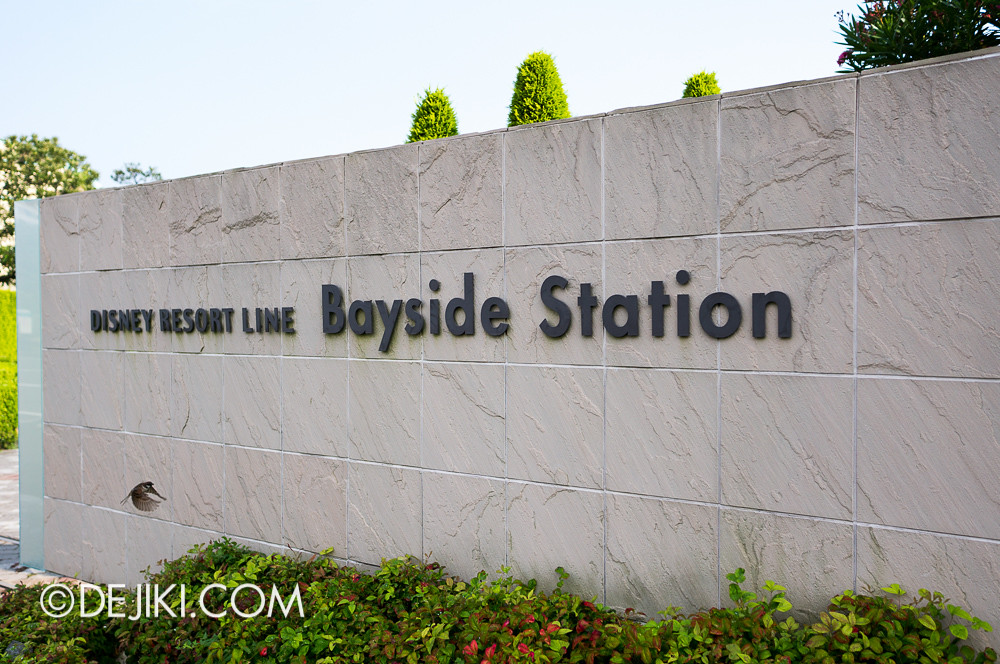 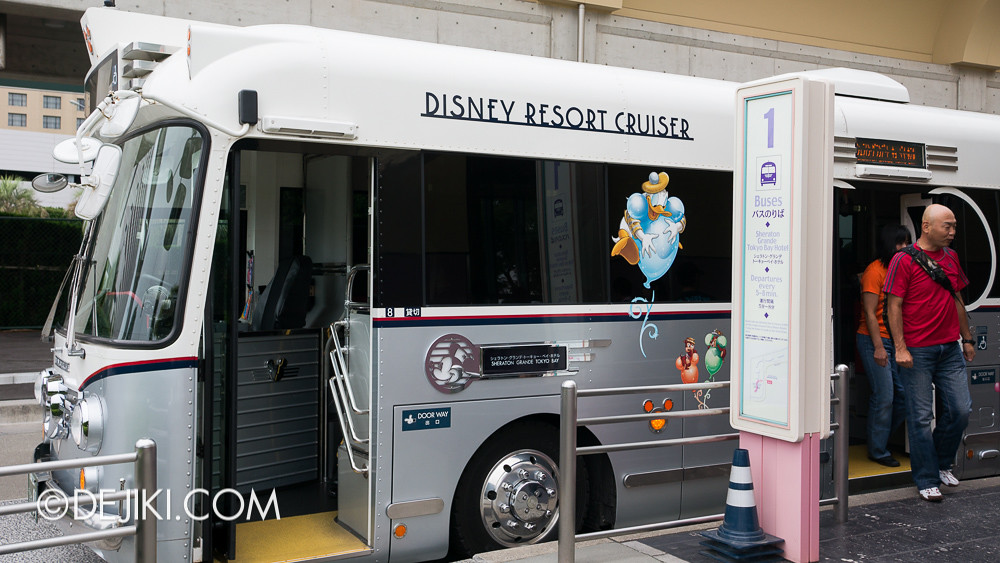 Of course if you want to save your energy (or ran out of it), wait for the Disney Resort Cruiser. 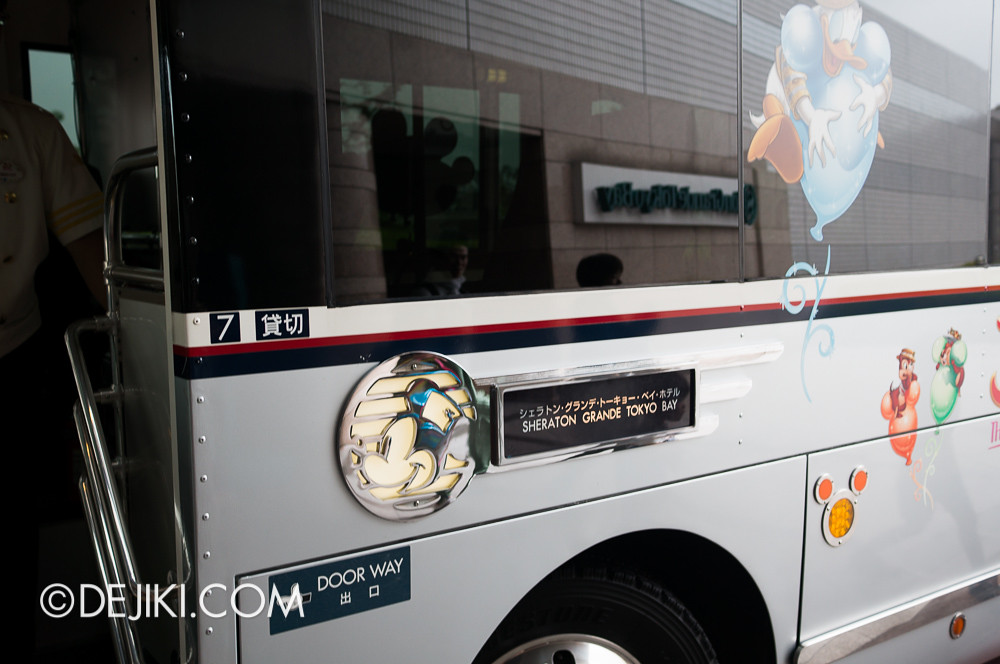 These are very cool themed buses, with a lot of Mickeys, hidden or not, inside. There is usually a line for the buses back to the hotel at night – the one for Sheraton Grande being surprisingly long. It is faster to just walk back. 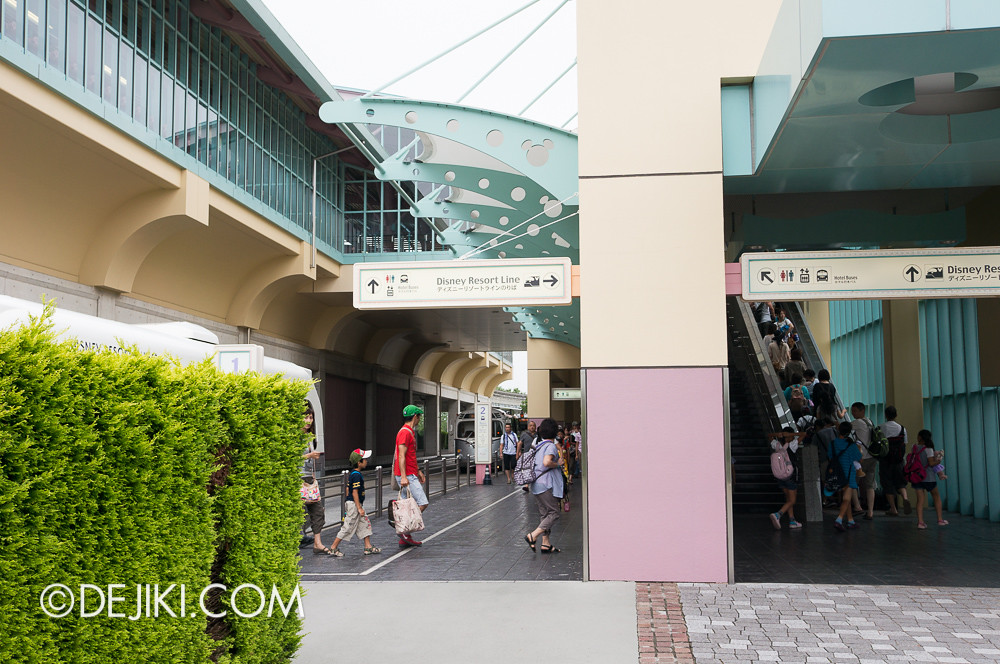 Chirpy and iconic Disney music plays around the station. To get you into the mood. 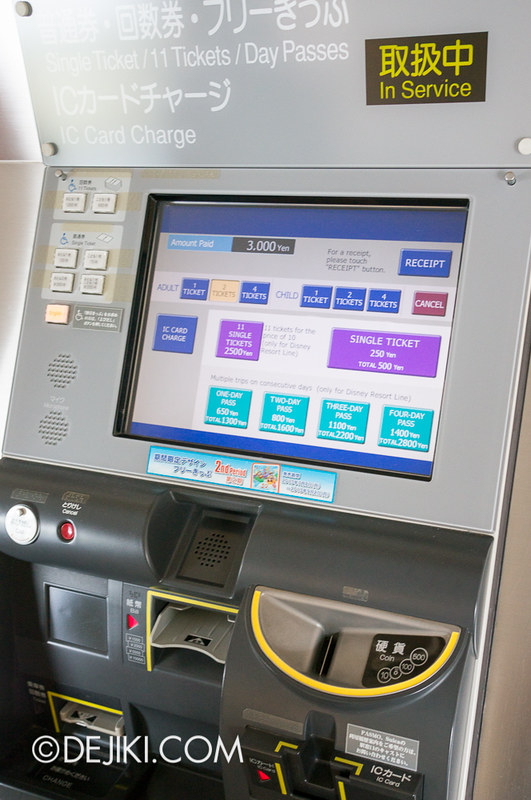 Tickets for the Disney Resort Line are sold via these fancy machines. Quite self explanatory, but always find and hit the English button first. There are multi-day (up to 4 days) passes and the 11 Single-Trip option.

You can also use Suica and Pasmo cards, or even the JR Rail Pass at the Tokyo Disney Resort Line.

After buying the tickets, you just need to insert them into the ticket gantries and walk through. Remember to collect your ticket when it pops out at the other end. 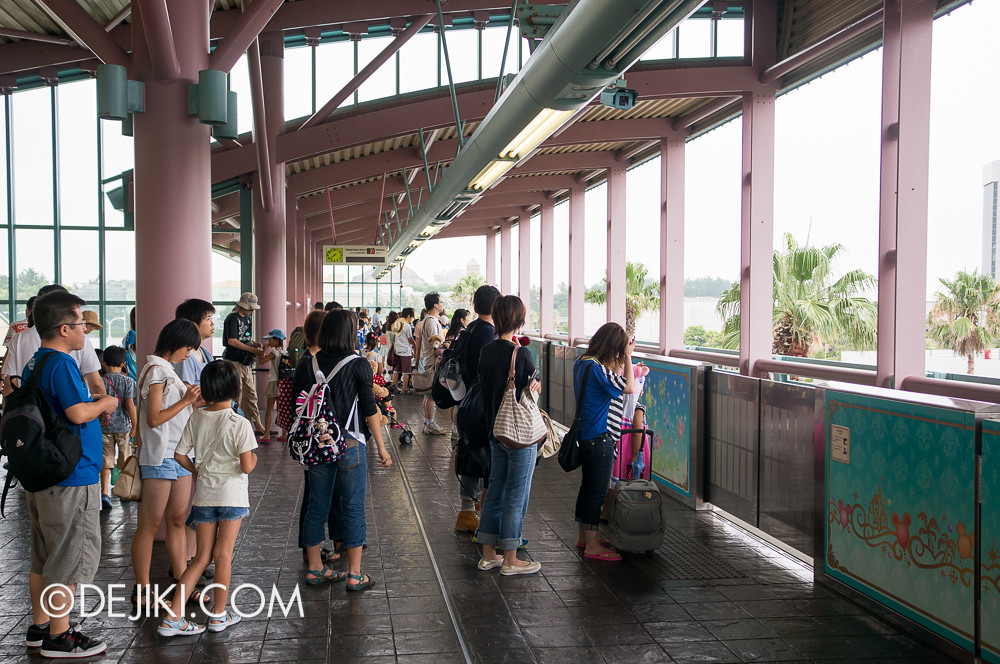 At the platform, find a less-crowded place to stand and wait, or just join a line. 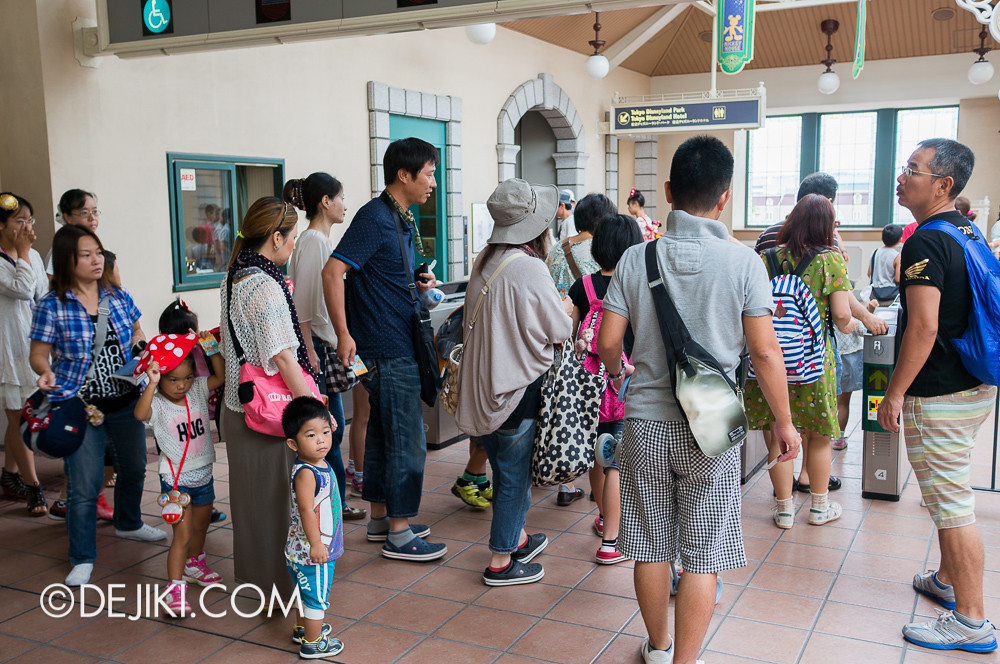 There are bottlenecks when getting out at the Disney Parks’ stations. So do be patient! 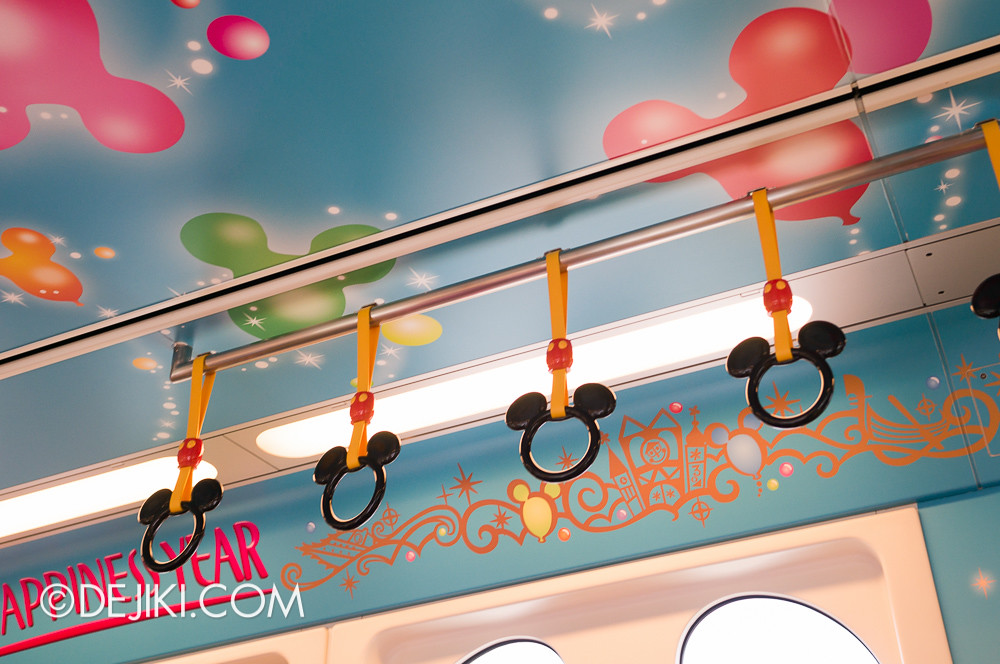 It’s quite colourful inside the train, but I didn’t have photos of the seats since the train cabins were cramped with people. There are some small display cases showing park merchandise, posters and of course, The Happiness Year decorations. 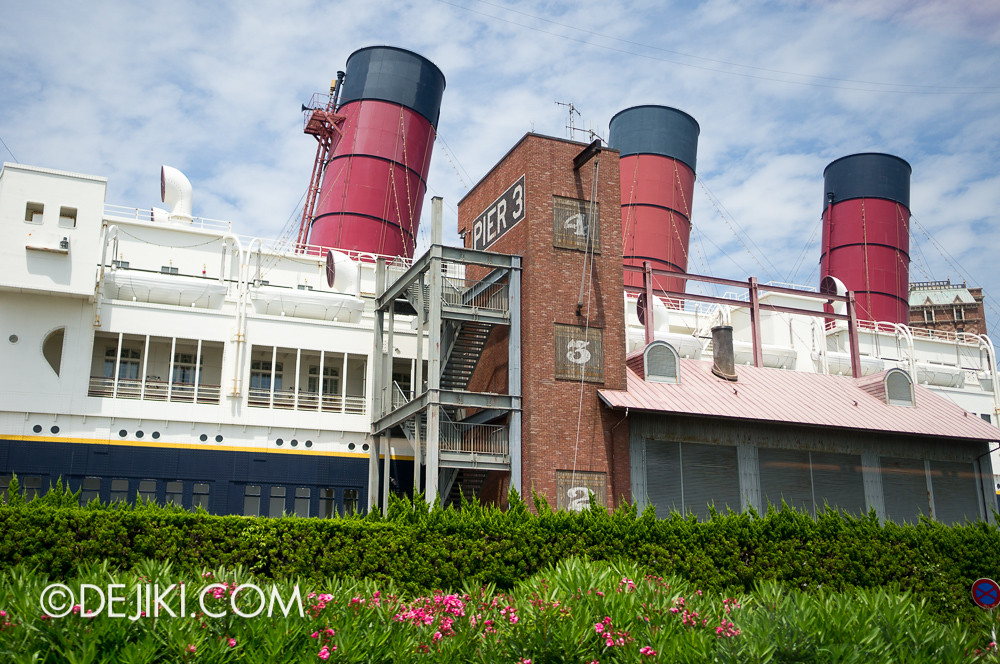 I became more interested in something else: Views of the park. Mostly backstage, too! 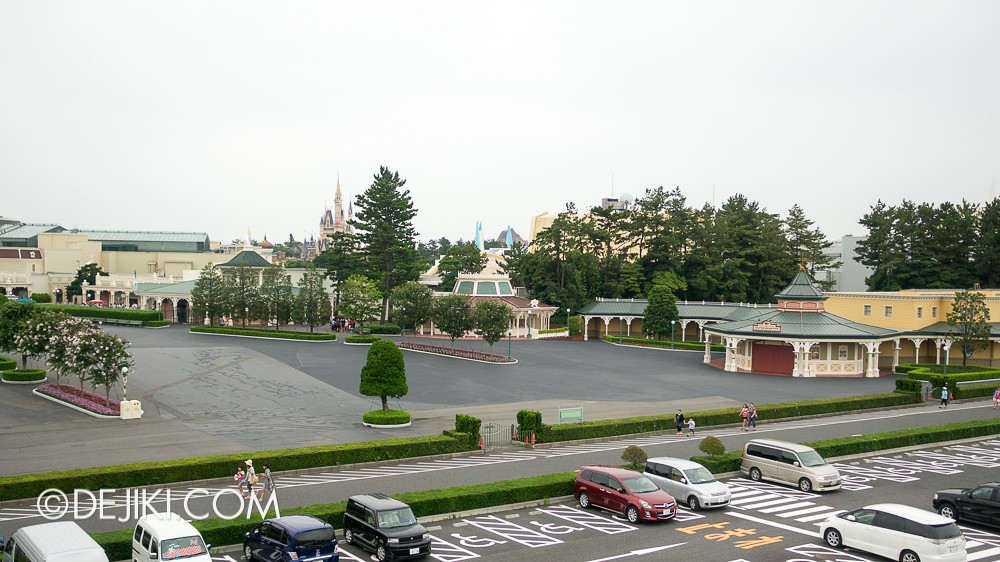 Think you know your theme parks well? Here are some backstage views of Tokyo DisneySea.
If you think you know what they are, feel free to post your answers. 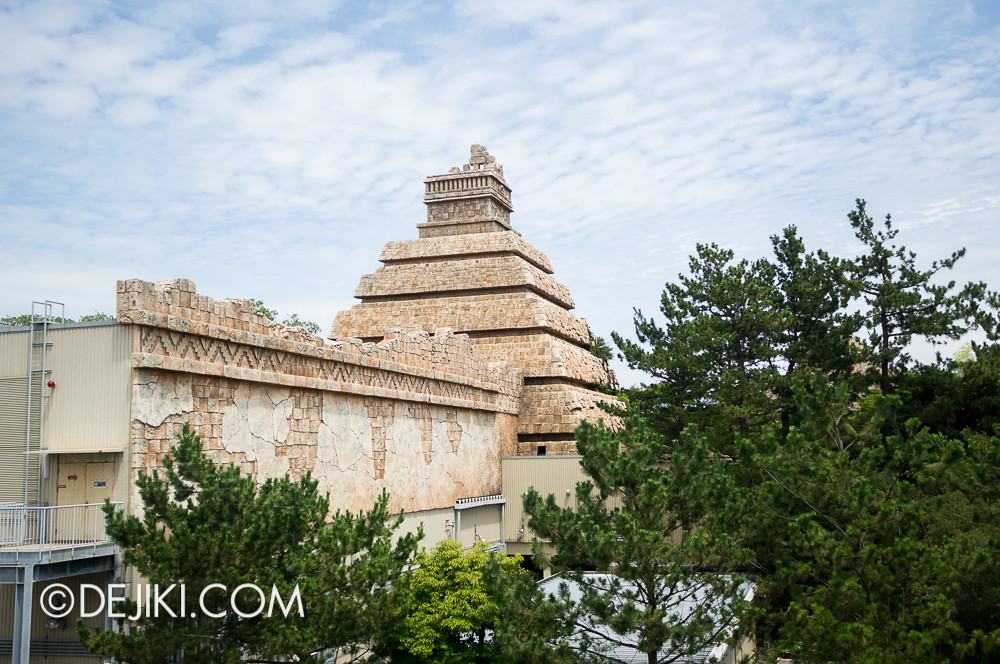 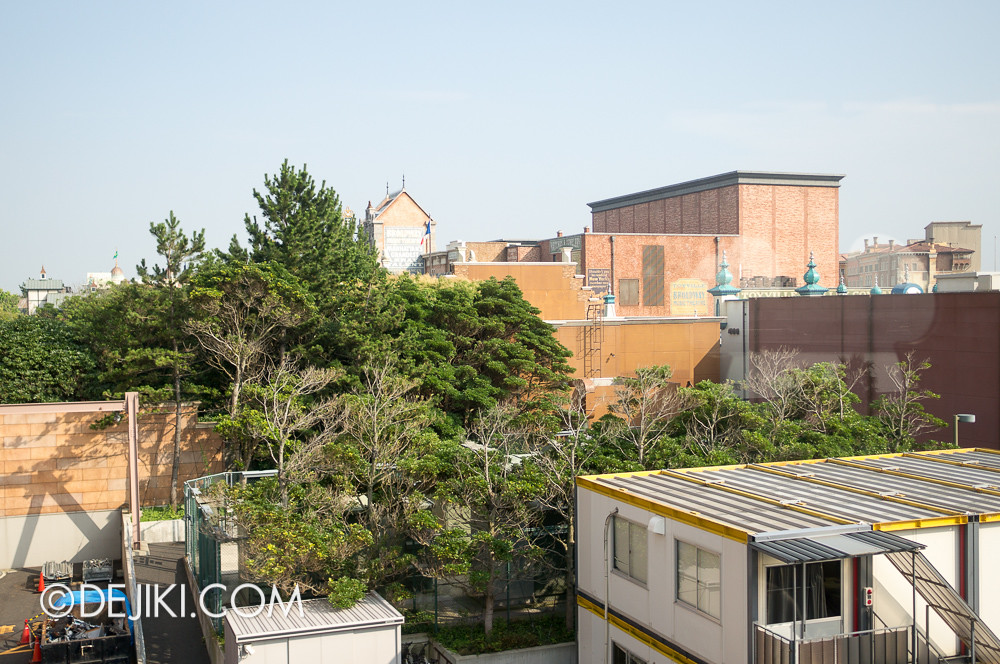 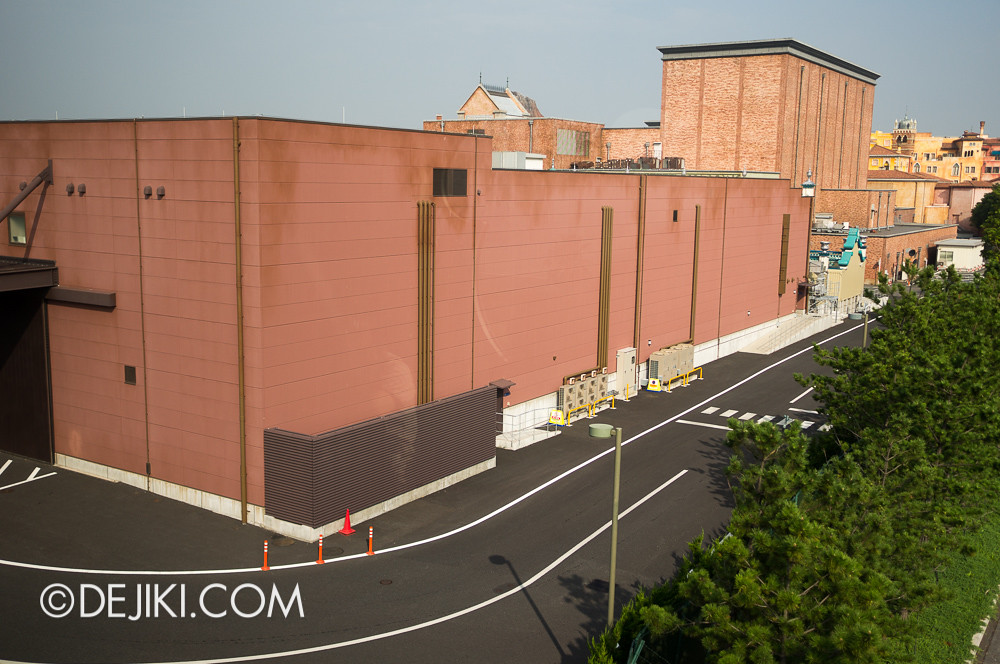 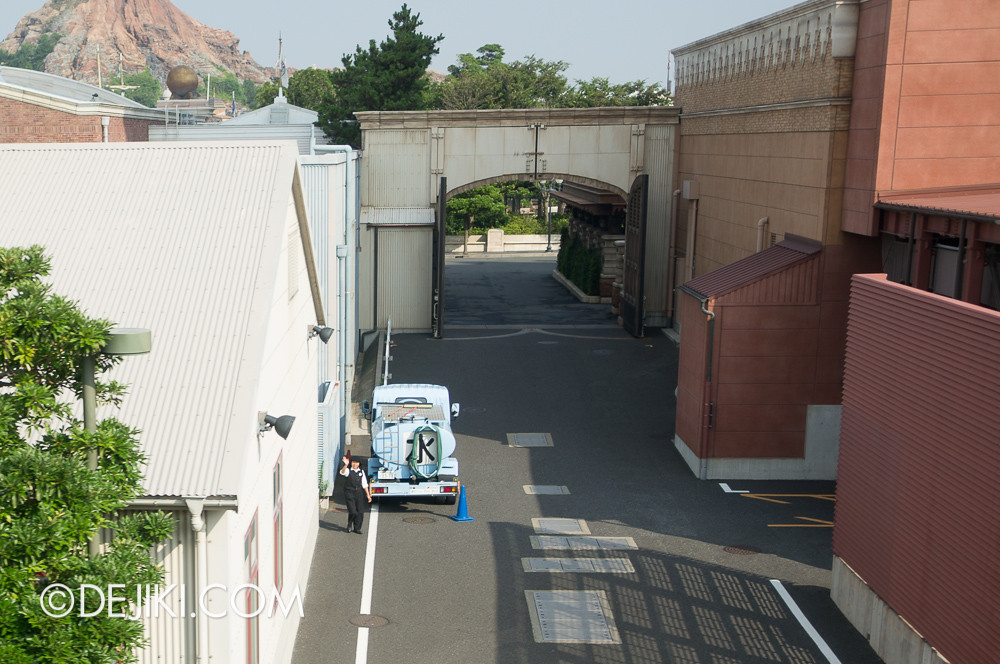 Can you spot the cast member waving back?

The monorail is quite fast, taking about 3-4 minutes to reach the next station. The loop goes: 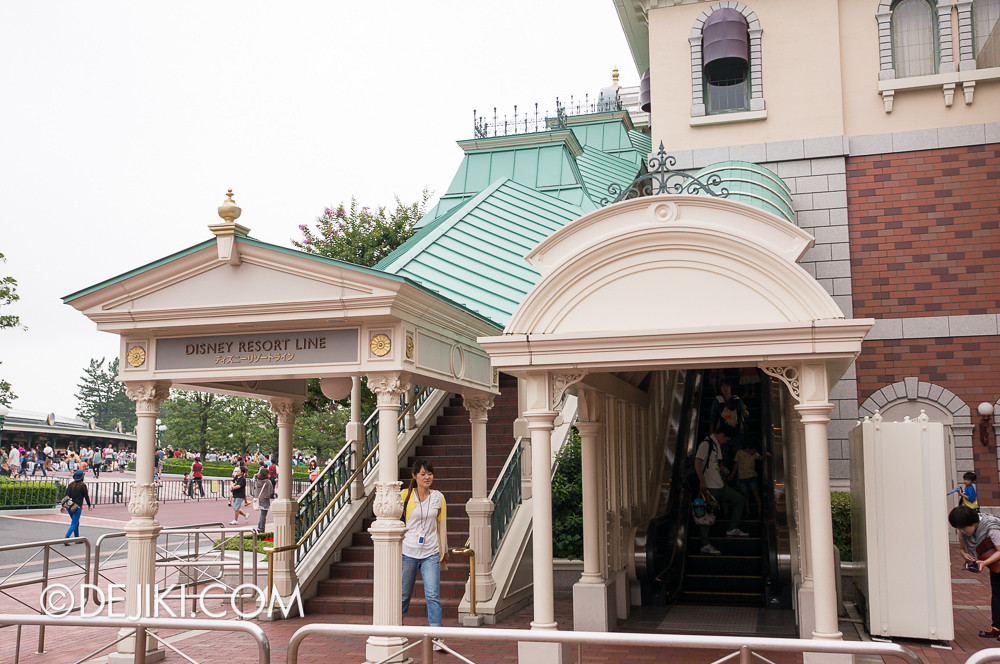 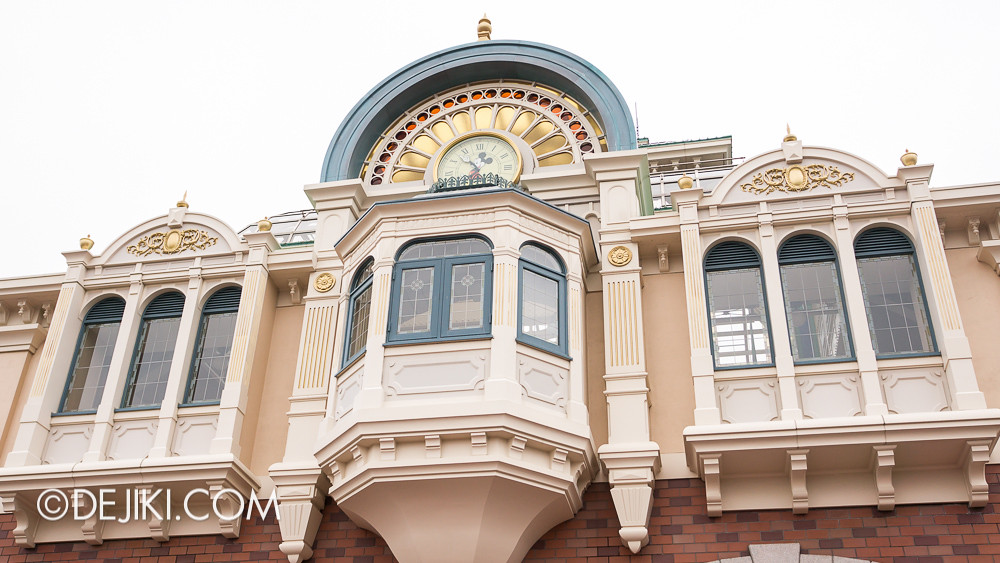 And there we are. This is the Tokyo Disneyland station. With the more dramatic Disney music playing, you know you’re at Asia’s Happiest Place on Earth.

12 Responses to Tokyo Disney Resort – Getting There and Around