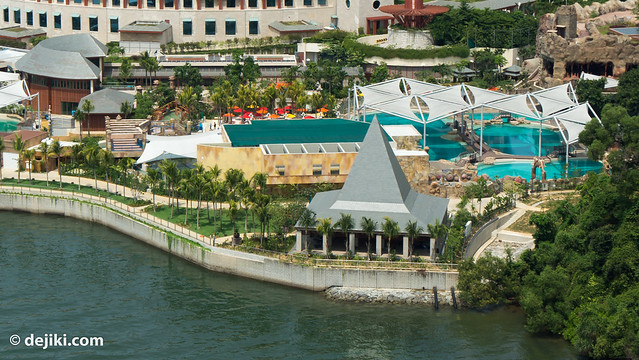 Marine Life Park looks amazing and almost complete now. Gone are the pools undergoing cleaning and treatment – they are all sparkling blue. There are also many finishing touches all over the park – we can now see the little facilities offered at the park to make a visit enjoyable.

This update also includes the list of water rides and attractions available at Adventure Cove Waterpark at Marine Life Park.

A nice, beach-themed area near the entrance with many lounge chairs. And as you can see, the park has painted all railings and gates bright blue. 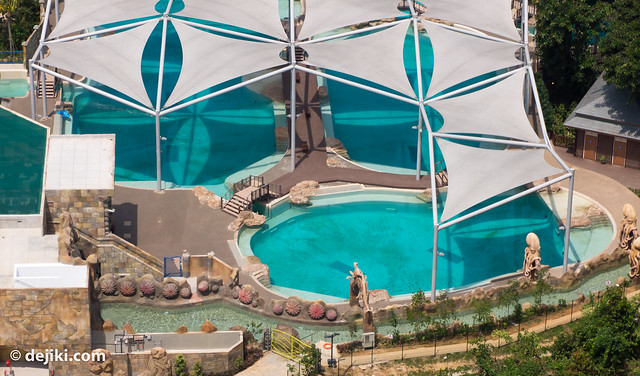 Nothing here, but still, Wow. 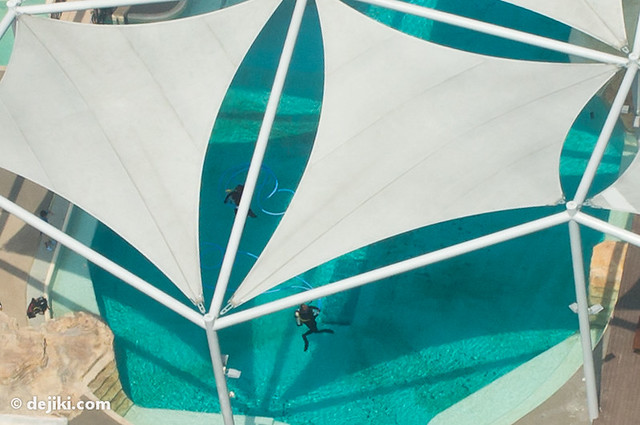 Some park staff were spotted in the pools a while later.

Apart from looking more complete and ready for guests, there’s nothing much to see or say about this area because the marine residents have not arrived in the pools yet. 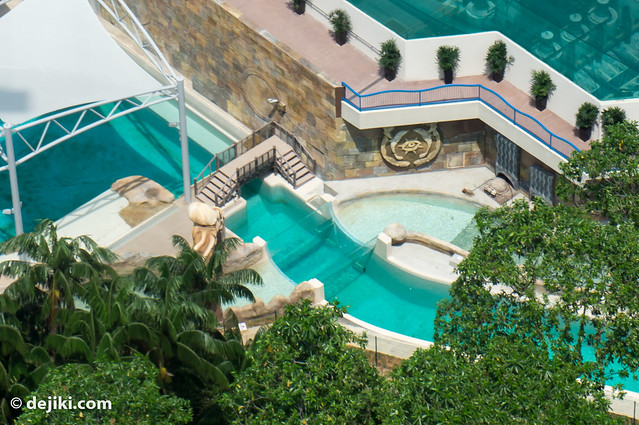 Months ago, I guessed that the Adventure River will cross over a water channel for marine creatures over a glass-like half-pipe. Well, it appears that I was correct after all! 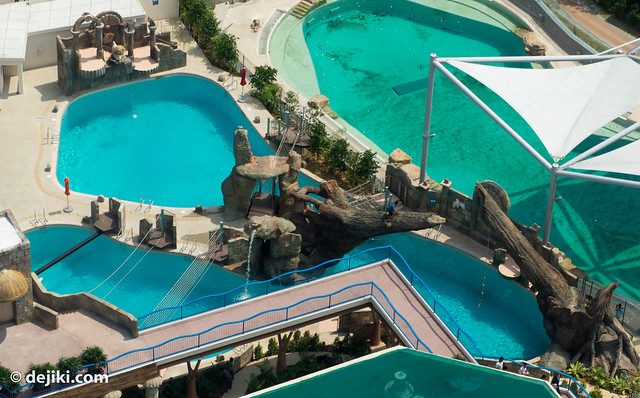 Remember the area with rope-bridges and pool ladders? It’s looking like RWS’s own version of Survivor or Sasuke/Ninja Warrior. 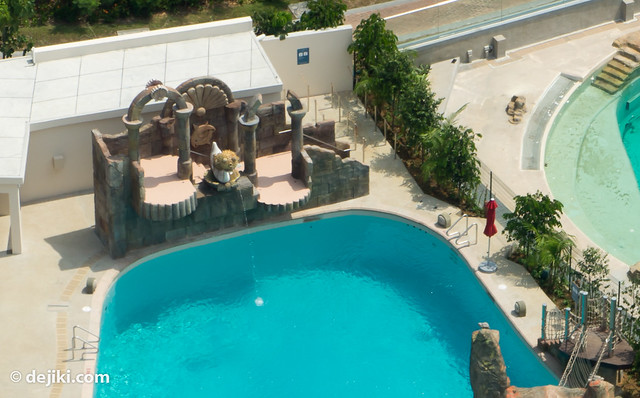 Two jumping boards to dive into the pool (presumably not installed yet but there are some marks to set up boards here). There is even a queue area made for this. 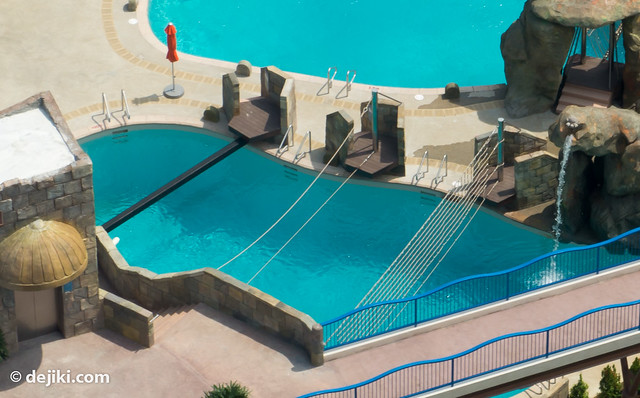 Three levels of river (or pool) crossing challenges: Balance beam with no ropes, a rope with a guide rope, and a vertical net. 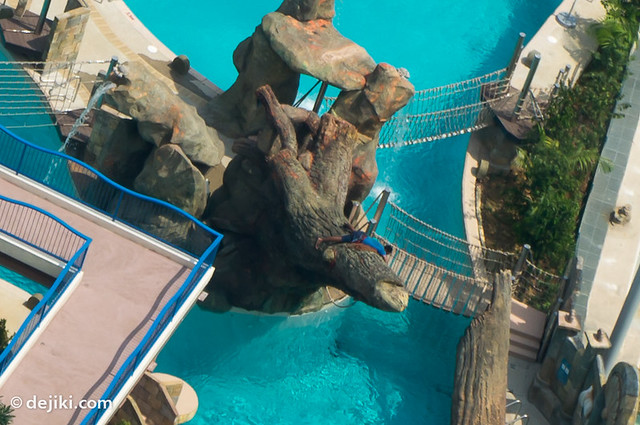 A narrow and loose rope bridge and a plank bridge which looks more stable. 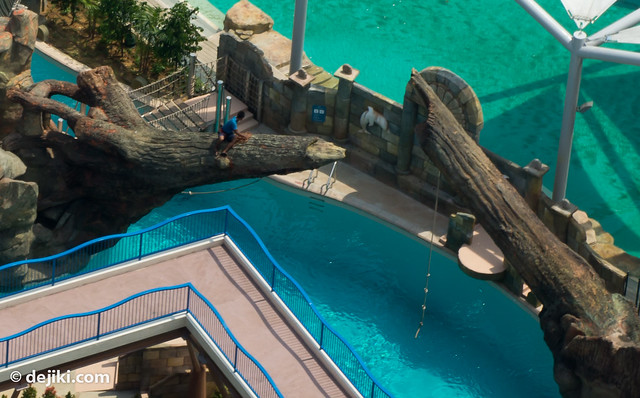 Two swinging ropes for those who feel like tarzan-ing across the pool. 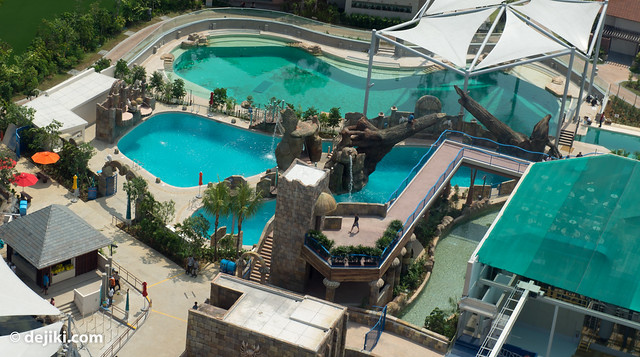 Quite a lot of simple but challenging stuff to do here. It’ll be popular with older children and adults.

Let’s move to the nearby attraction: Adventure River. 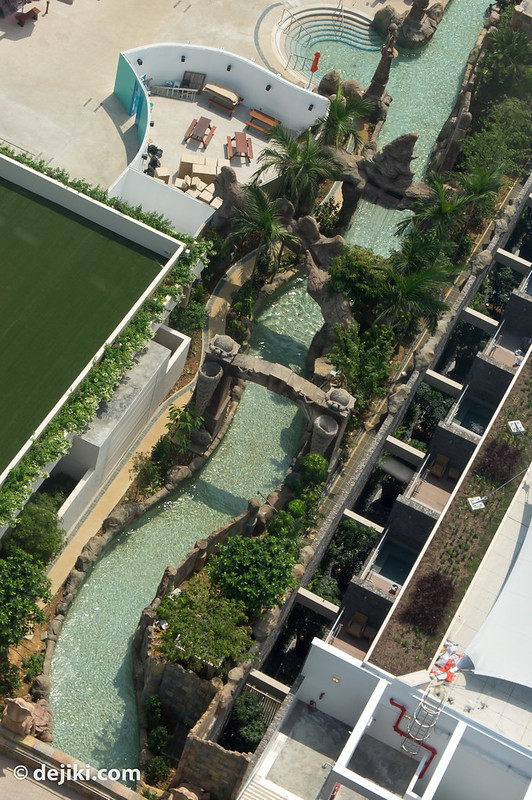 The Adventure River looks ready for guests to hop in! 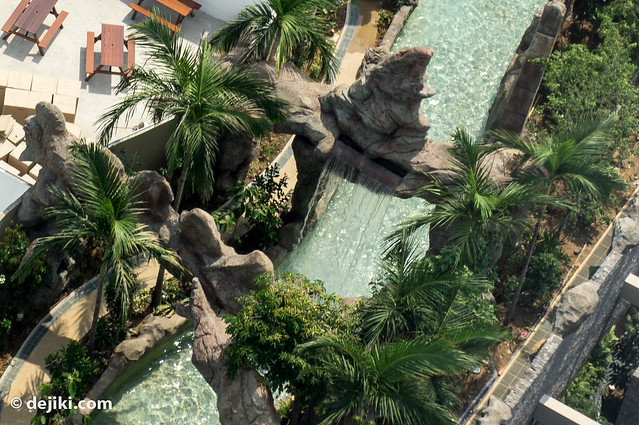 It even has a few waterfalls (I found three) along the way to ensure that riders will get wet throughout their journey around the park. 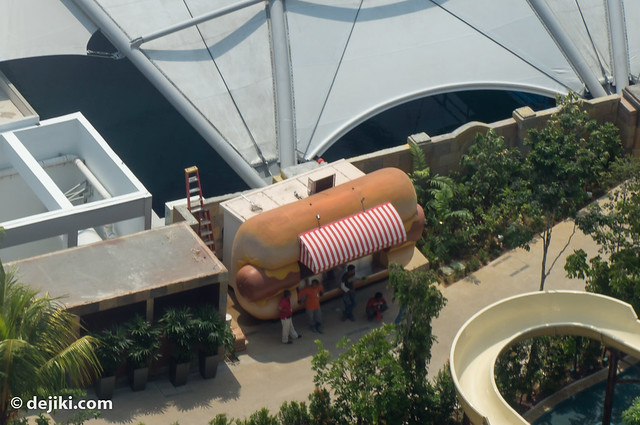 Now doesn’t this look a little out of place? But it does look familiar, doesn’t it?

Random Anecdote
Why, it’s a replica of the famous Tail o’ The Pup hotdog stand from L.A., California. Why is it here? For those who don’t know, this hotdog stand used to be at the Hollywood zone at Universal Studios Singapore, right beside Brown Derby. If you walk pass the area, notice how there’s a yellow-boxed cutout on the street. Yep, that was where this Hotdog stand used to be.

Anyway, the stand was removed before the park opened to public in March 2010. Despite originating from L.A., It didn’t really look right beside Pantages Hollywood Theatre and The Brown Derby, so I’m not sure how it looks here. It really is the same stand, by the way, with some changes – see how there are two holes at the top of the stand. Well, those were used to hold up the “Tail o’ the Pup” signage. 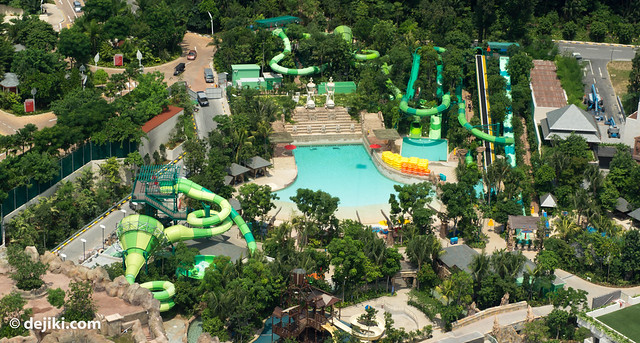 Let’s take a look at the rides over here.

Oh before I forget, I now have the names of the attractions at this area. This information is based on my own research, as no official information is available to public yet.

*Amusement/Thrill rides and attractions within this zone only. Does not include Marine Life exhibits/aquariums/pools/shows/etc.

Bluwater Bay
The only wave pool at the park, surrounded with thrilling water rides. Cabanas and lounge chairs form a cozy ring around the shallow edge of the pool.

Adventure River
The long lazy river that travels around most areas of Marine Life Park.

Roarin’ Rapid or Riptide Rocket
Note: I’m not absolutely sure if this is the right name.
A high speed water slide, also known as a “Hydromagnetic Coaster” which uses a conveyor belt as a (somewhat launched) lift hill.
The blue 2-rider in-line tubes are used exclusively at this ride.

Pipeline Plunge
A long water slide that is mostly enclosed.

Speed Racer
A dual-lane slide for two riders to dive head-first on a mat, racing down several dips. 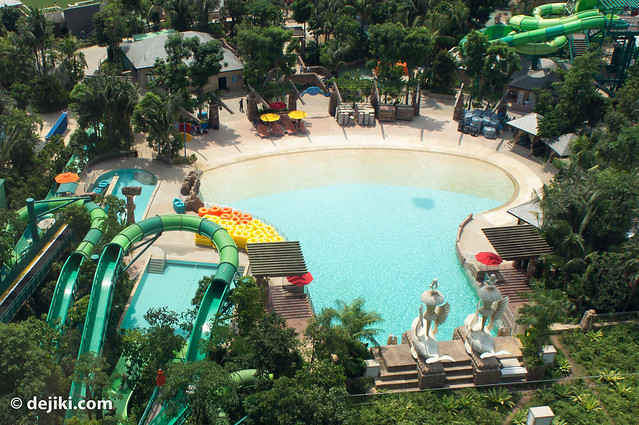 Everything looks ready in this area. Floats stacked nicely, some slides operating… There are some park staff doing finishing touches and maintenance work. 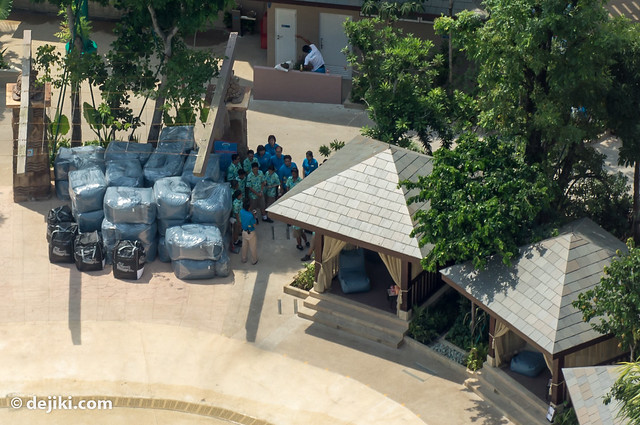 A group of park staff gather around beside one of the Cabanas along the Bluwater Bay wave pool.

Also, the non-permanent queue system (with mobile rope posts) is set in place for rides in the park. If you’ve noticed, there is no covered queue areas. Logically, the rides will close during inclement weather, but it’s something to be mindful of, especially those with sensitive skin (or sensitive to heat). Even the lounge chairs around the Bluwater Bay are exposed to the sun – until the foliage form a nice overhead cover.

That concludes another installment of Marine Life Park – from the air. The park is looking ready, with most of the facilities getting finishing touches and strong numbers of park staff around the park. I hope I’ll be able to feature some marine creatures in the next update. Stay tuned (Subscribe!) for the next update in a few weeks.

2 Responses to Marine Life Park – from the air 4