By Dejiki on May 9, 2012 in Attractions, Marine Life Park, Theme Parks 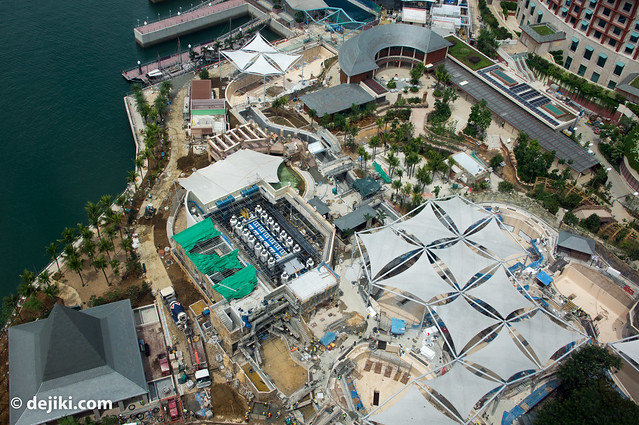 Let’s take a look at what’s been happening at the Marine Life Park. Please refer to the first entry for more information about the park. 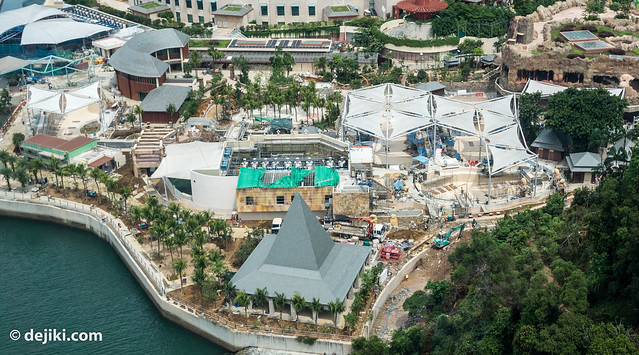 There’s still a lot of construction going on, but progress is steady: Most of the structural work for the canals (for Adventure River and Marine life) are completed, and more decorative elements are starting to appear.

When will the park open? It looks likely to be anytime between September to December 2012. 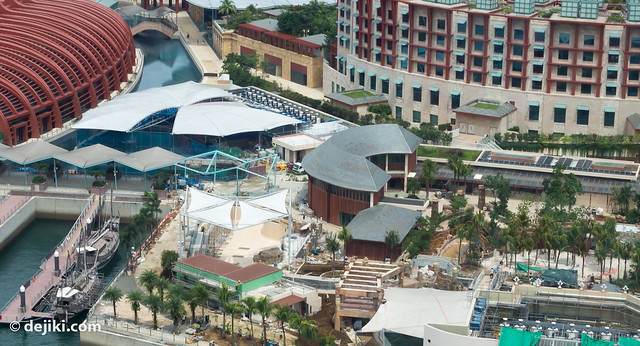 I forgot to mention in the previous entry this large structure that’s beside the Maritime Experiential Museum. In this photo, it’s beside the red building. It is heavily sheltered, unlike the open pools in the Marine Life Park. Could be a theater of some sorts, though it’s too early to say.

More mysteries surround this building, but here we can see how the pool, that the Adventure River circles around, look like. It’s also early to comment, but from the looks of thing from the air, the park has everything packed very closely, just like Universal Studios Singapore. I’ll be keen to know how the different elements actually fit together on the ground. There’s at least four different styles going on here now, and some other sections of the park have even more complicated mix of visual elements. I’m not sure what zoning strategy is used for this park, other than “maximize the space available”. 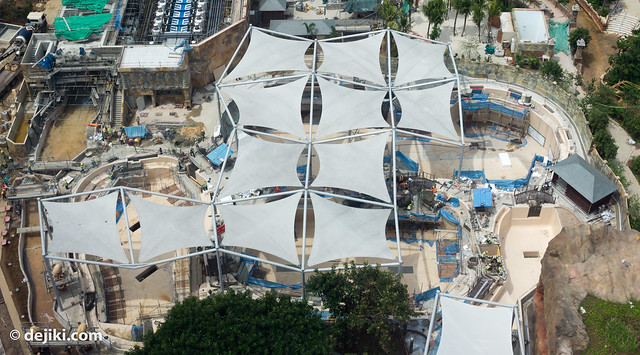 The large pools here have different depths. The one of the left is the most shallow. The one on the right, appears to have some glass panels (those long rectangular pieces on the wall of the pools). It’s hard to see from the air, but there should be some way to get down (through the adjacent buildings, I guess). Initially the park planned to have very open atrium areas where guests choose to walk at street level, to view the tanks above water level. Or they can go to the lower level and walk beside the tanks and view them. While it seems that the park will still keep this feature, just that it won’t be as “open” as initially planned. 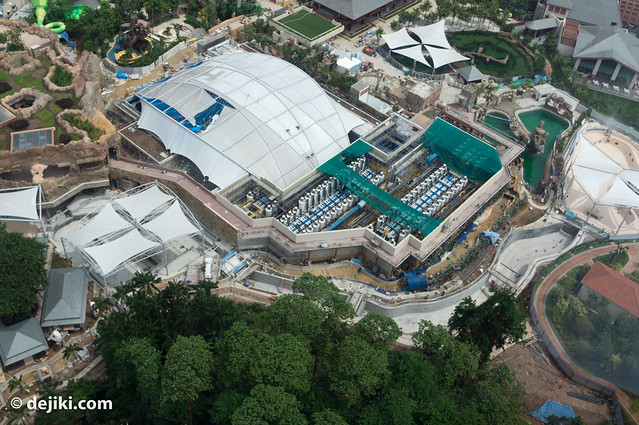 Over at the “Equarius Side”, the water jets at the Reef Swim area were turned off, and the “shark tooth-shaped” pool next to it has water now. Also, it’s a bit hard to see, but notice that there is a walkway here (circling the filtration tanks area) for guests to walk from the Rock building to the “Equarius Side” of the park.It will also give a nice view of what’s going on at the Adventure River. 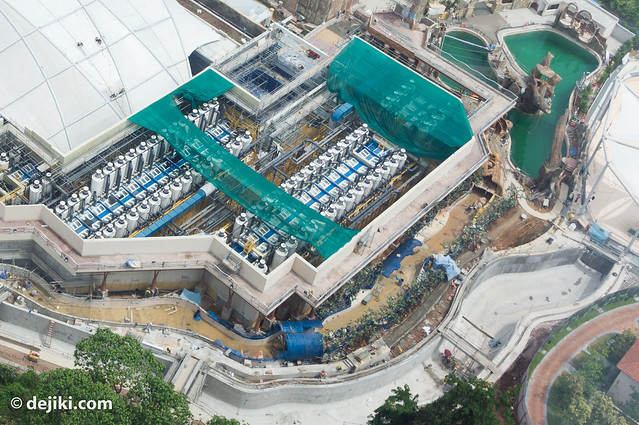 Construction has commenced for thematic elements along this section of the Adventure River. 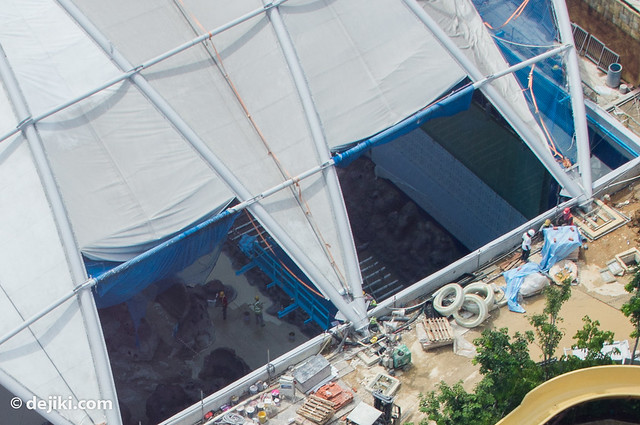 Most of the white covers for the big aquarium have been pulled out now, leaving a smaller window to see what’s happening inside. But it looks like construction has been going well, with most of the construction pallets, seen in the last update, all gone! Towards the left appears to be the glass panels, protected by the white films for now. 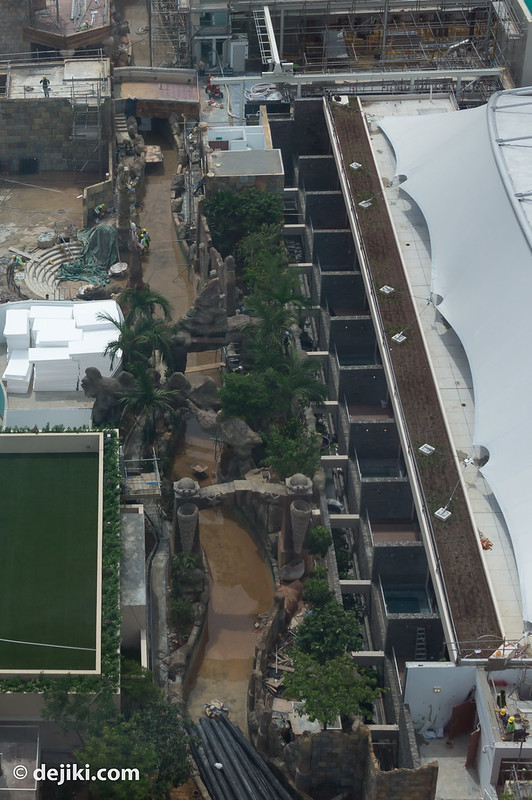 Now this is interesting. On the left, we see the nice thematic detail for the Adventure River.

But take a look at the right side: the nicely spaced out “cubicles”. These are the Marine Life Park Ocean Suites. There are 11 of such two-storey Ocean Suites, the balconies overlook the Adventure River and should also offer some very unique services and features, since it is housed in the same building as the largest aquarium in the park. You can be sure that guests staying here net bragging rights – that they are staying in the park. (Shame this wasn’t done at Universal Studios Singapore!) 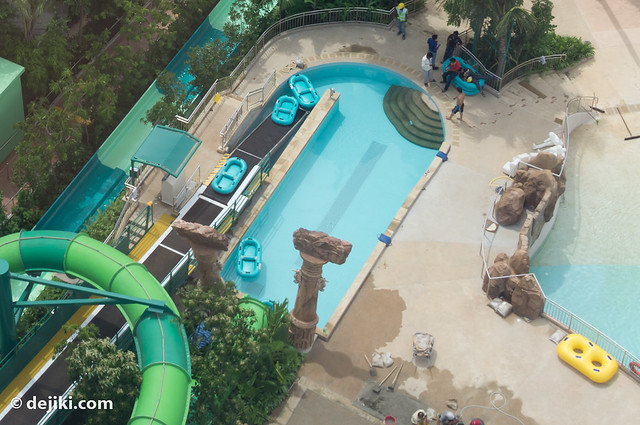 Nothing much for the thrill-filled section of the park. There’s more “ride vehicles” there. 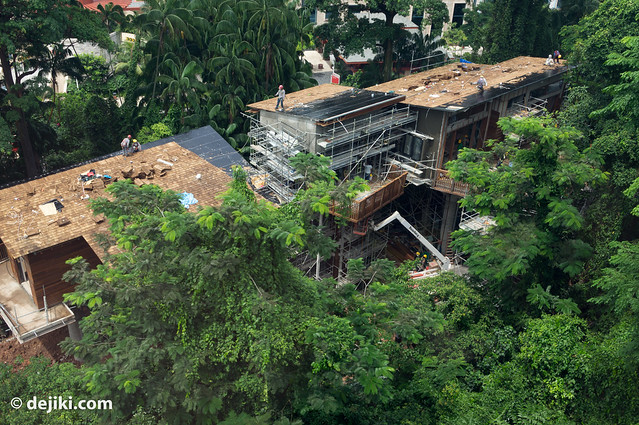 Apart from the Ocean Suites, the park also provides more accommodation options in the form of treetop lofts. They’re right beside the wave pool area.

That’s all for now. Stay tuned (Subscribe!) for the next update in a few weeks.

8 Responses to Marine Life Park – from the air 2