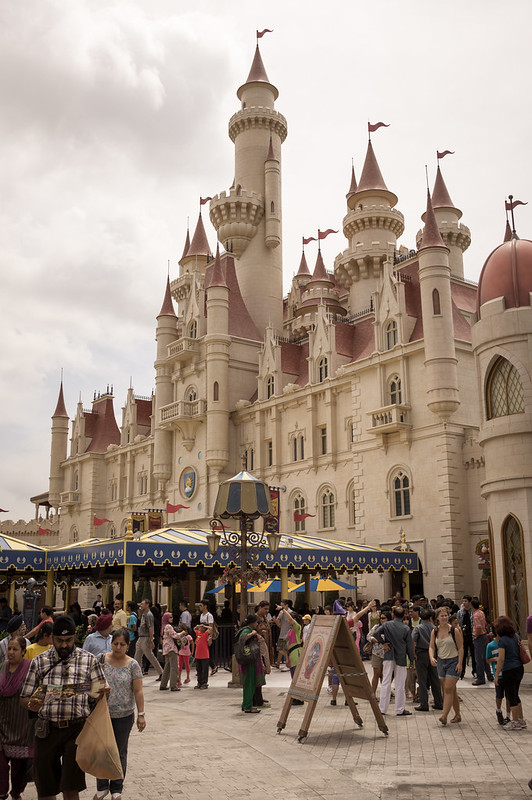 On 28th May 2011, the park celebrated its grand opening. I was back at the park a year later, but it was an ordinary day. Unlike other major theme parks, there were no “First Anniversary” events here, but the park recently announced some new attractions.

As part of the park’s plan to add more attractions, Sesame Street will be built at the New York zone. This would bring in an indoor ride, street performances and of course, merchandise stores.

At this moment, this is the known timeline:

Sesame Street will be rolled out at the park in phases, starting with character meet-and-greet and street performances. These are already part of the park’s daily activities.

In July, new retail stores will be opened around the New York zone. One of them will be themed to the Sesame Street School Bus.

Lastly, the park will open an indoor ride where guests follow Elmo and friends around New York. It is expected to open before the end of the year. 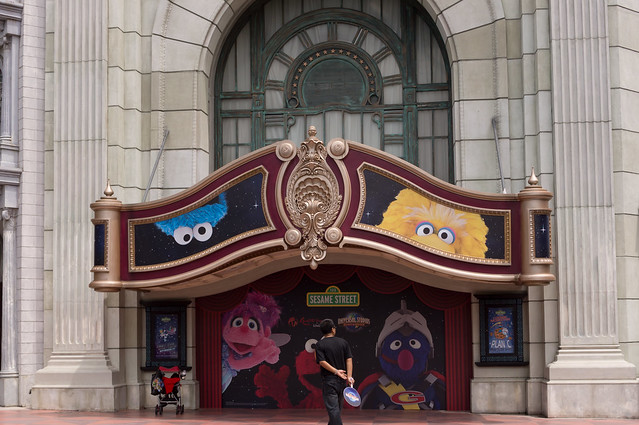 There are two likely locations where the Sesame Street indoor ride will be built. This is one of them – at the “Universal Theatre” at the start of the New York zone. This building façade (actually known as Stage 29) was expected to be the entrance to the Stage 28 attraction. Given that the Sesame Street New York extension is quite… extensive, I believe Stage 28 will no longer be built. Besides, the actual Stage 28 building has been used as a MICE venue (and a scare maze during Halloween Horror Nights) anyway. 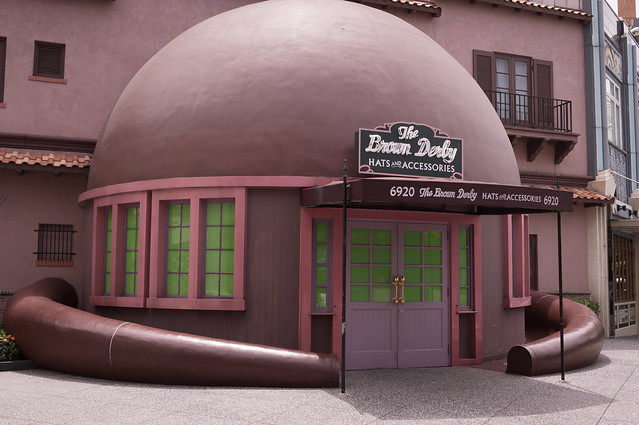 Across the street – Brown Derby has been closed. Is it under refurbishment, or will it be gone? Given that the park intends to build three retail outlets, it is likely that it may become one of them. 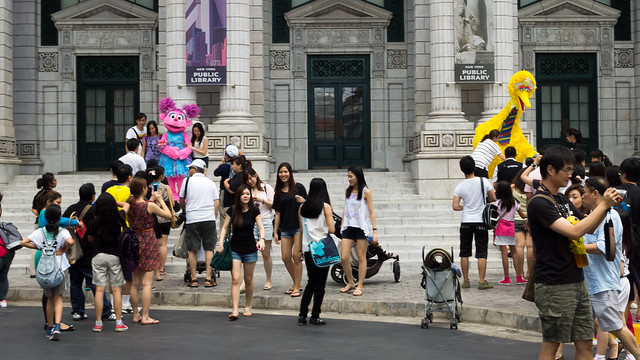 Character Meet-and-Greet will be held at the New York Library steps. Like the other Meet-and-Greet sessions at the park, these characters will appear at random, or 5-10 minutes after a Sesame Street performance.

The park promises about 3 to 5 street performances in a day, with 3 shows in the current line-up. Specific schedules can be found on leaflets in the park. Yesterday (28th May), the show times were: 11:00AM, 2:15PM, 4:00PM. Take note that the park schedules do not state which show will be performed.

These shows are performed with actors wearing larger-than-muppet costumes.

This show is performed up to twice daily. This is a longer show (about 12 minutes long).

These two shorter shows are performed up to three times daily.

I stayed for one performance called “Our Favourite Things”. I was half expecting the song from The Sound of Music. 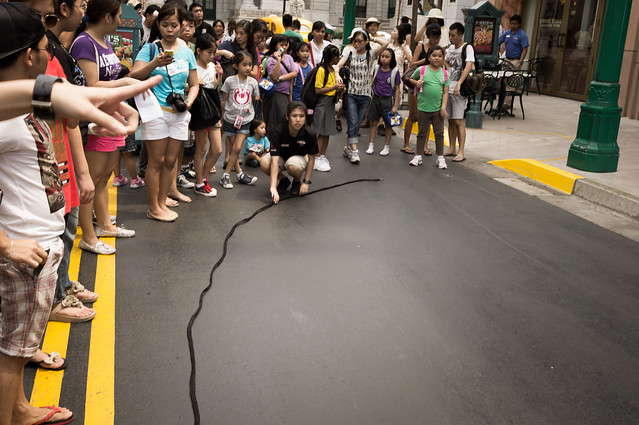 Many guests (and RWS staff) gathered around the New York Library, only to see the park crew bringing out a black rope and heading towards the other way. I was quite surprised to see the short rope being laid out in a small arc on the street. 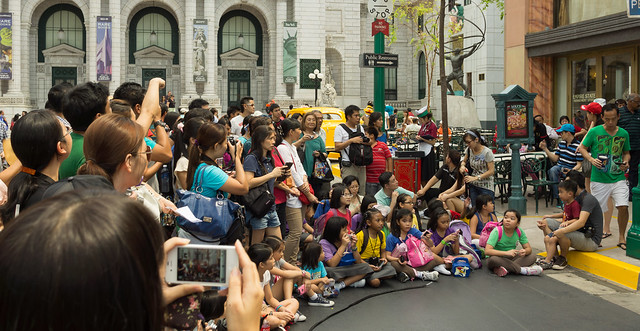 In a few moments, the usual music at New York gave way to a few Sesame Street themes. The characters enter the park through a door at the Rockefeller Center façade. 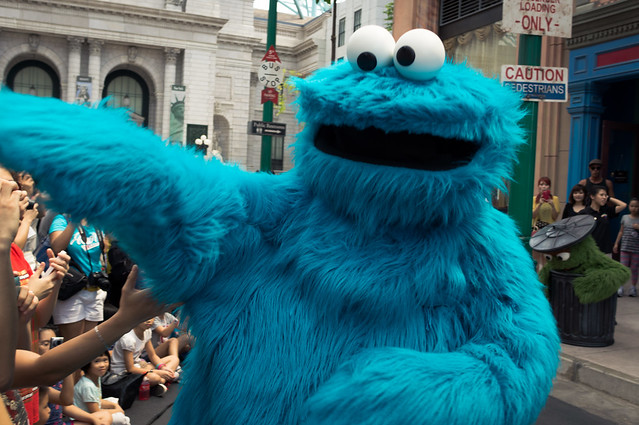 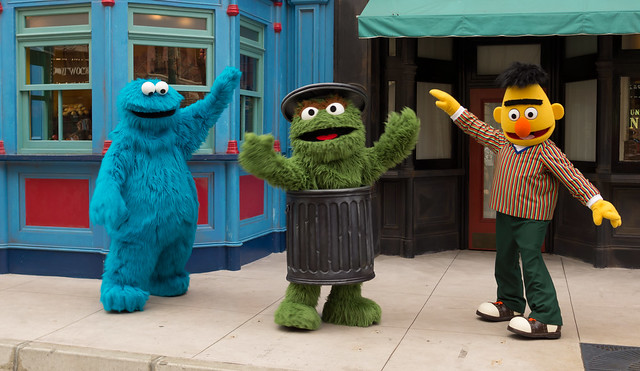 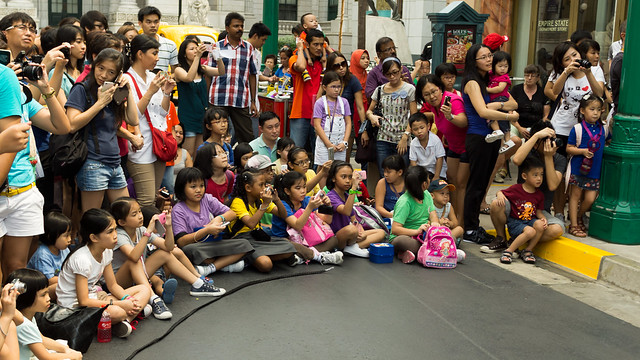 I’m amused to see children that are more interested in taking photos and videos, instead of actually watching the performance. 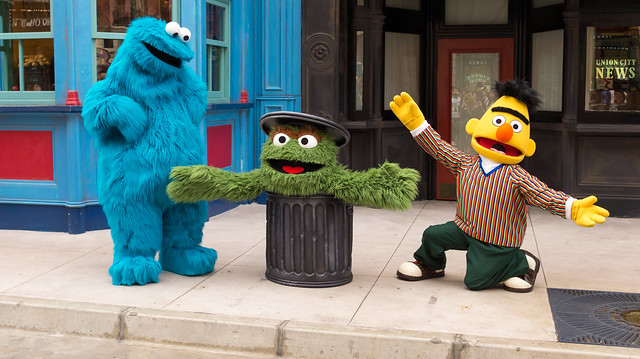 This performance is a short one – about 6 minutes. The characters basically introduced themselves (and their favourite things) and then break into song. There aren’t actually any interaction between the characters and audience apart from the usual greetings due to the nature of how the performances are actually, “performed” – movements synced to a pre-recorded track. 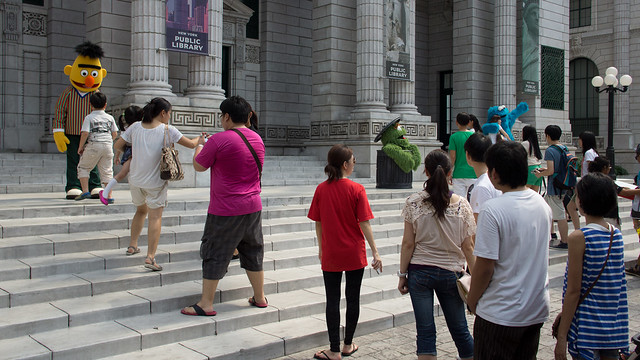 After the performance, guests were instructed to walk over to the New York Library for Photo Opportunities.

My thoughts on Sesame Street

I’ll just be honest. I was first shocked when news about this zone leaked out last year. Frankly, after hearing that Universal Studios Japan will be building The Wizarding World of Harry Potter, this almost seems like a slap in the face for Universal Studios Singapore. Is the Singapore park is not adequate enough to receive what is to becoming the “signature zone” of Universal Parks? With Sesame Street, the park will have 3 out of 7 zones to be specifically “family-friendly”. Let’s not forget that each zone has 1 or 2 “family-friendly” rides. This park is starting to look too… friendly.

But it seems that the park loves this idea and has the new stuff planned out properly. There are long queues for character meet-and-greet. Maybe park guests do love Sesame Street – I’m not sure about that for myself.

While it is expected to be an indoor ride geared towards children, I hope the park does not intend to skimp and construct yet another technically simple ride. We’ve seen the unsatisfactory feeling from guests disembarking from Madagascar: A Crate Adventure and Treasure Hunters. In order to avoid another “Madagascar” situation (where guests ride it once and never want to step in again), the Sesame Street ride has to offer something apart from a typical sightseeing ride that this park has an abundance of.

A family-friendly (I’m tired of using this term but it’s most suitable) ride does not need the adrenaline-pumping movements of a high speed ride, but should use modern ride to build exciting and memorable guest experiences. There are several successful rides around the world.

Put in interactive elements (e.g: Men in Black: Alien Attack, Monster’s Inc: Ride and Go Seek, Buzz Lightyear’s Astro Blasters, Toy Story Midway Mania) or unconventional scene/ride movement (e.g: Pooh’s Hunny Hunt) to ensure the guests – of all ages – would want to step into the queue again. And of course, decent Animatronics – definitely not the ones used in Madagascar: A Crate Adventure. 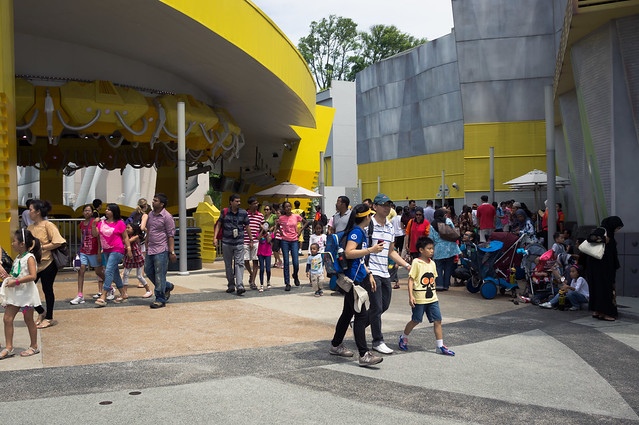 It is the June Holiday season again, so expect the park to be crowded. On 28th May, the wait-time for most E-Ticket rides (Transformers, Battlestar Galactica, Jurassic Park Rapids Adventure) hovered around 40-45 minutes. Revenge of the Mummy peaked at around 35 minutes.

Expect longer waits at Canopy Flyer – the wait time remained steady at 45 minutes in the afternoon.

Even with such crowd levels, it is still possible to hit all the attractions within a day with proper planning, or making use of the Singer Rider line. Be sure to ask at the ride entrances of Transformers, Battlestar Galactica, Jurassic Park Rapids Adventure and Canopy Flyer. Alternatively, invest in Universal Express passes if you do not wish to break away from your group.

Most importantly, do plan to have your meals early as the park restaurants get filled up very quickly during lunch.

Other Shots from the Park 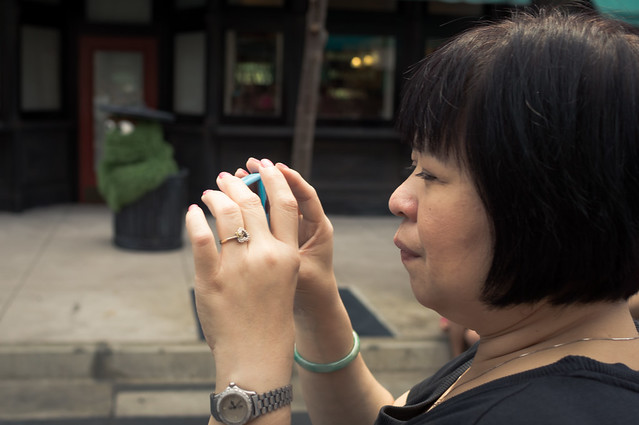 One of many people recording the Sesame Street Performances. 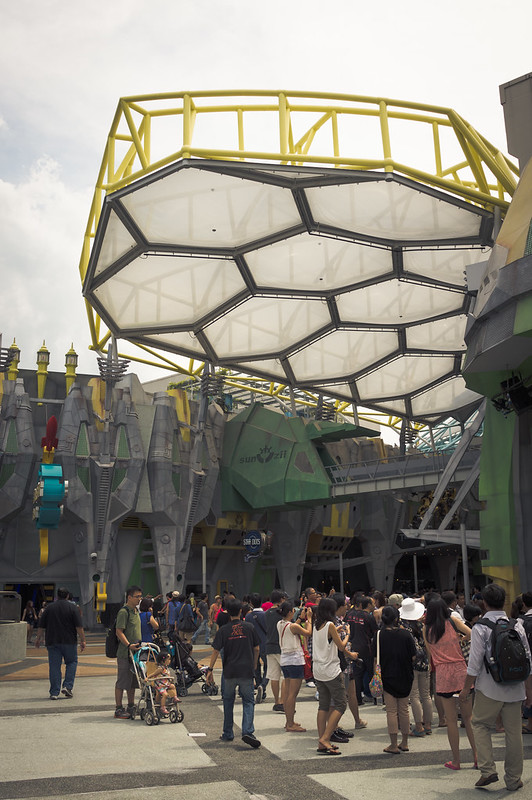 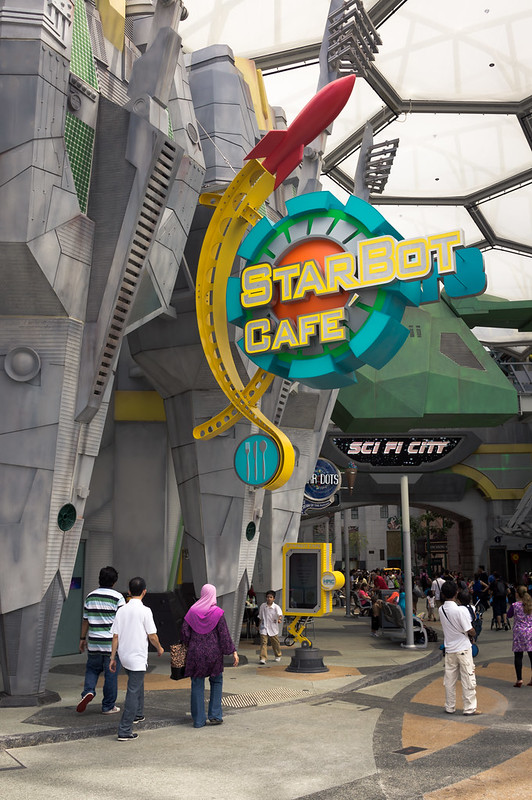 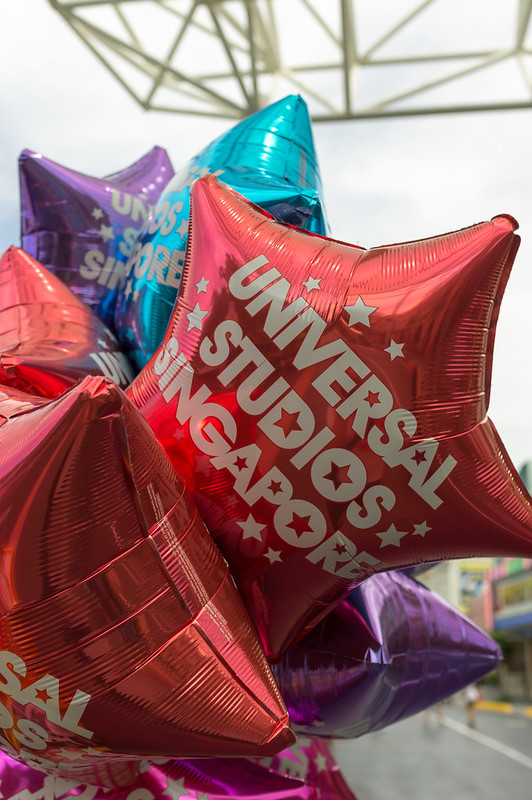 The star-shaped balloons now have ‘Universal Studios Singapore’ printed on them.