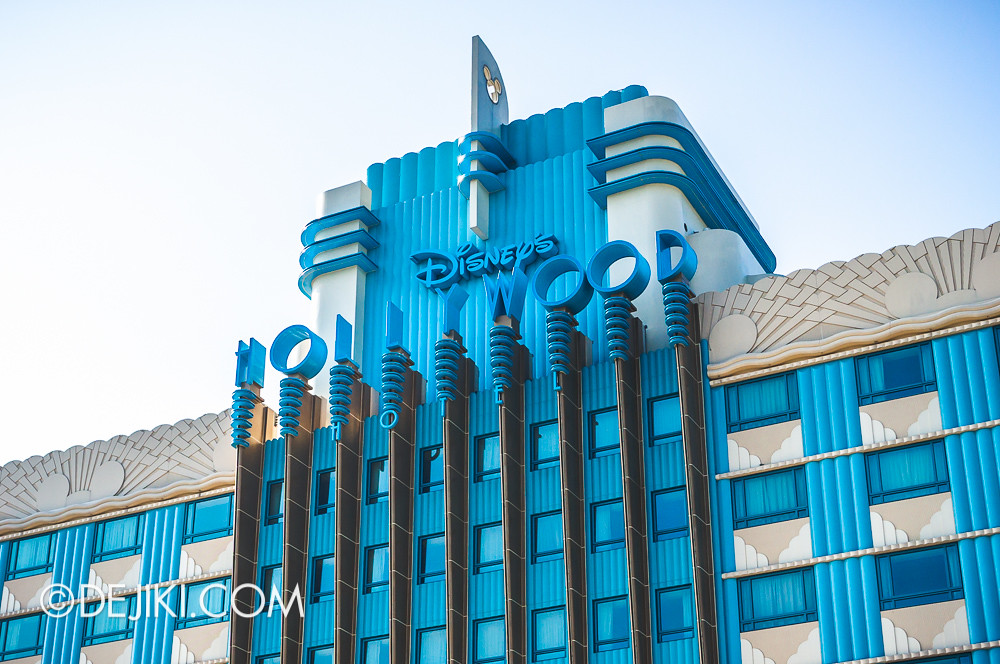 Disney’s Hollywood Hotel is one of the two hotels at Hong Kong Disneyland Resort. As an Official Disney Hotel, the look and feel of its facilities and services are top-notch and designed to extend the magical experience of the Disneyland theme park. 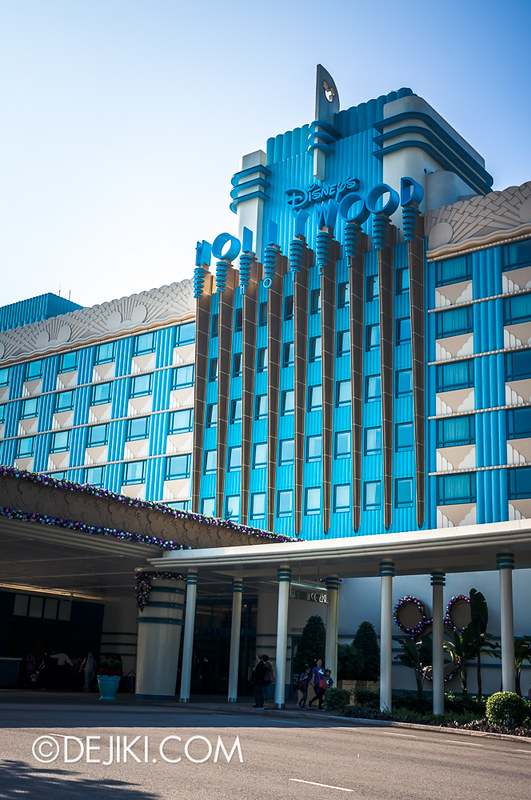 Before we begin, a mandatory disclaimer: Hong Kong Disneyland sponsored our two nights’ stay at Disney’s Hollywood Hotel. This also included character breakfast packages (which will be featured in another entry). No monetary compensation was accepted for words and photography; all opinions are of my own. 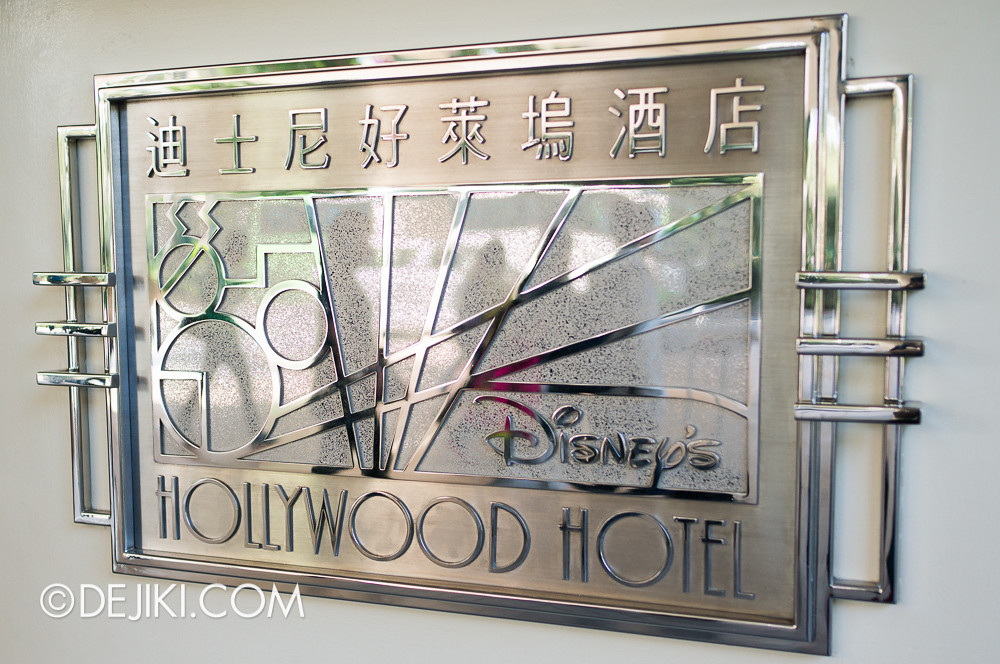 Right after we’ve touched down in Hong Kong, we took a direct coach to Disney’s Hollywood Hotel. It evokes the rich 1930s golden age of movies – with a somewhat cartoony Art Deco aesthetic. 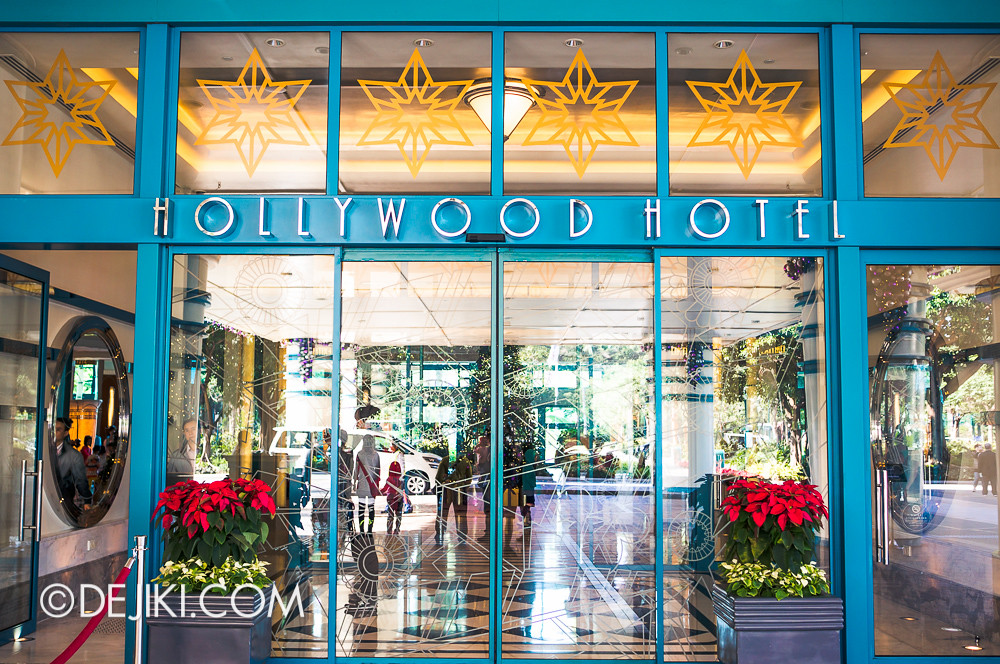 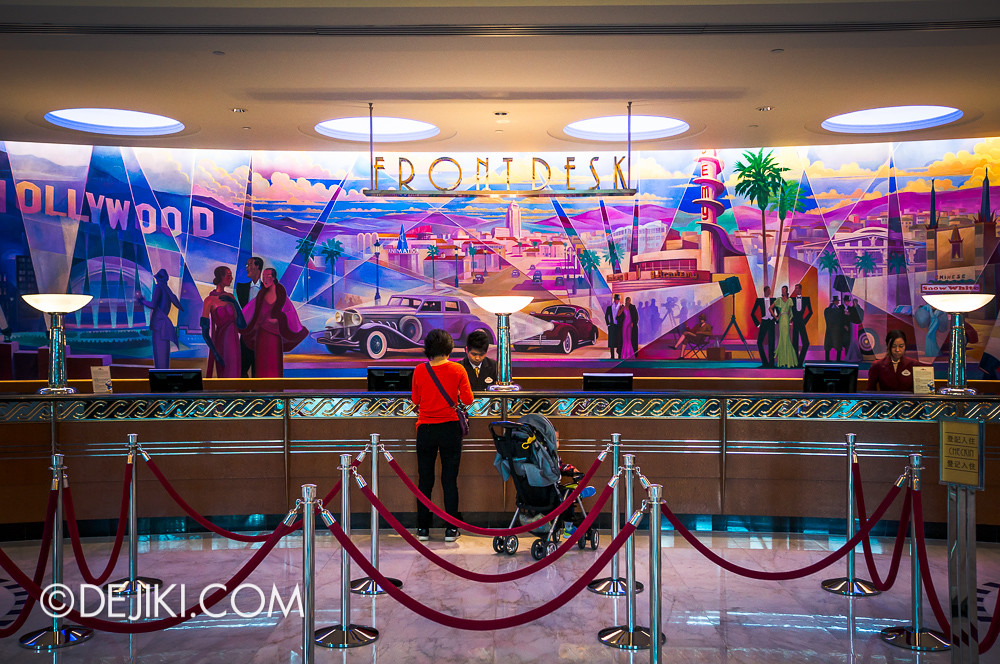 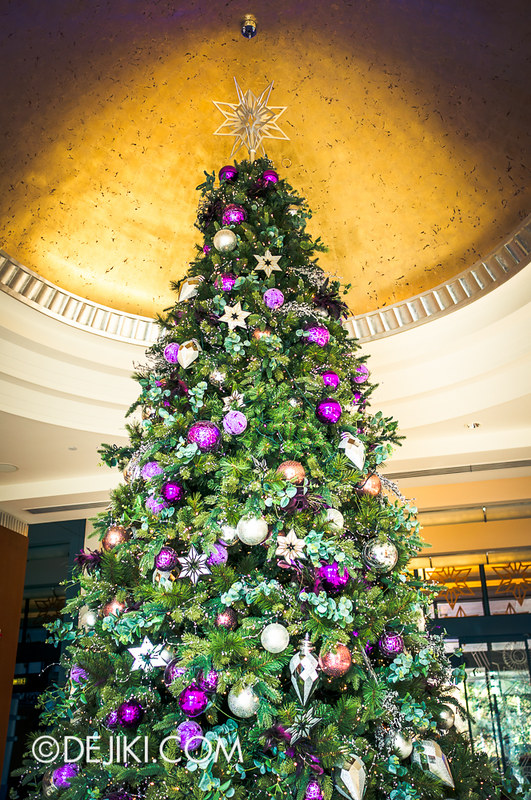 There is a Christmas tree at the lobby of the hotel. Decent, but not as tall as the giant at the other hotel. To the left of the tree is a store that sells items from Hong Kong Disneyland. It’s well stocked but the selection is as wide as the airport store. You can also find Hotel exclusive items in this store (as well as the other one in Hong Kong Disneyland Hotel). 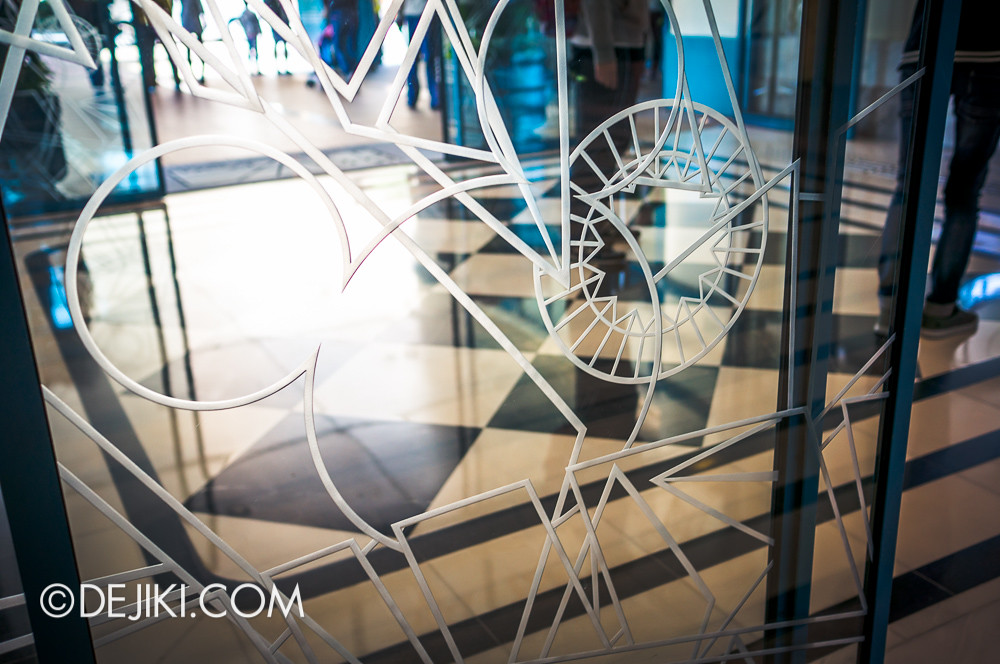 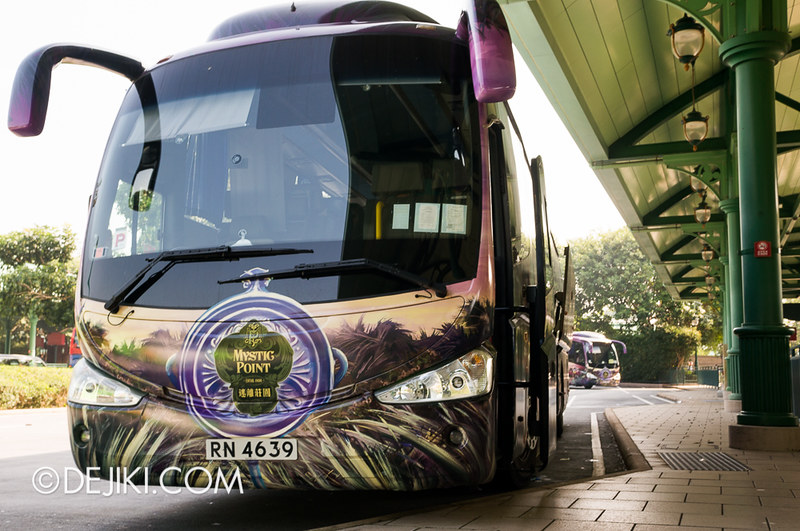 The resort (as a whole) offers a free shuttle bus service which ferries hotel and park guests between the Disneyland Resort Public Transport Interchange (PTI) (not the park gates itself) and the resort’s two hotels. It’s a short 5 minute ride from this Hotel to the PTI (from there, another 5 minute walk to Disneyland Park gates). Each hotel has its own bus stop which is just a short walk from the lobby. The shuttle bus stops at PTI are located beside the Disneyland Resort MTR station.

Here’s the route of the resort shuttle:

This is a one-way loop service, so guests who wish to transfer from the Hollywood Hotel to Disneyland Hotel would need to get down the bus at PTI and walk to the other end of the Interchange to board the other bus. Therefore, please make sure that you have everything for the day before leaving your hotel otherwise it’s going to be a great waste of time getting around!

The resort shuttle runs throughout the day with normal service from 6:00AM to 1:00AM.

I still think that Tokyo Disney Resort’s Monorail is far more efficient. Fun fact! This hotel is actually located behind the Toy Story Land section of HKDL. Some parts of the orange RC Racer track could even be seen from the Hotel grounds. Actually, the hotels are not that far away from the HKDL Park Promenade, it’s a 20-30 minute walk to Disney’s Hollywood Hotel. 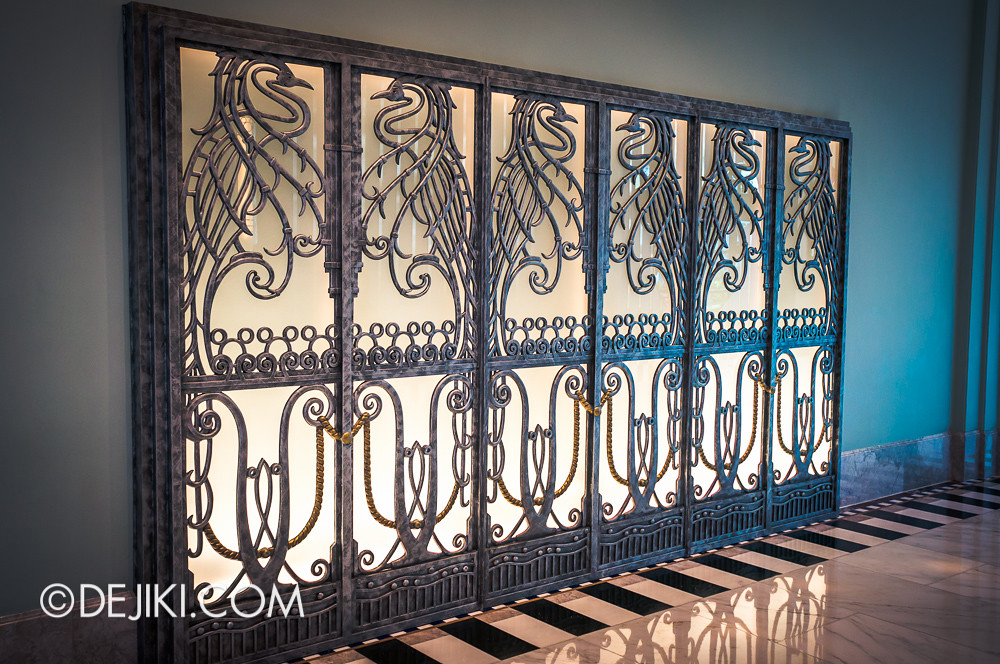 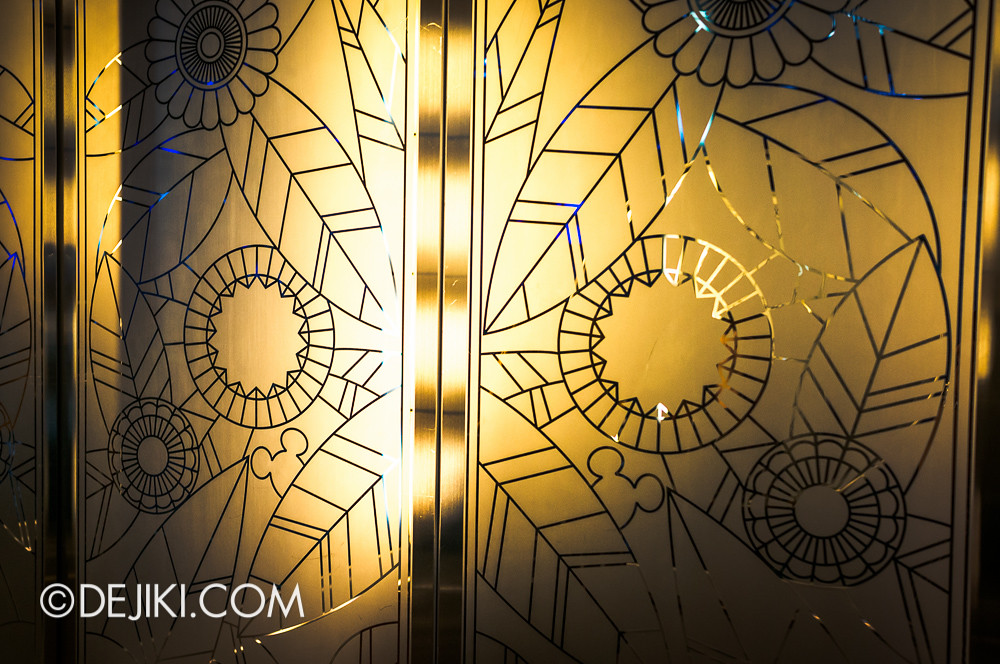 The lifts were quite interesting. Why so? Mickey and Friends haunt this lift! Well, not really, but you’ll hear character greetings and other funny remarks while in the lift. It’s a cute touch, but I think some people might feel that it’s creepy (especially late at night). 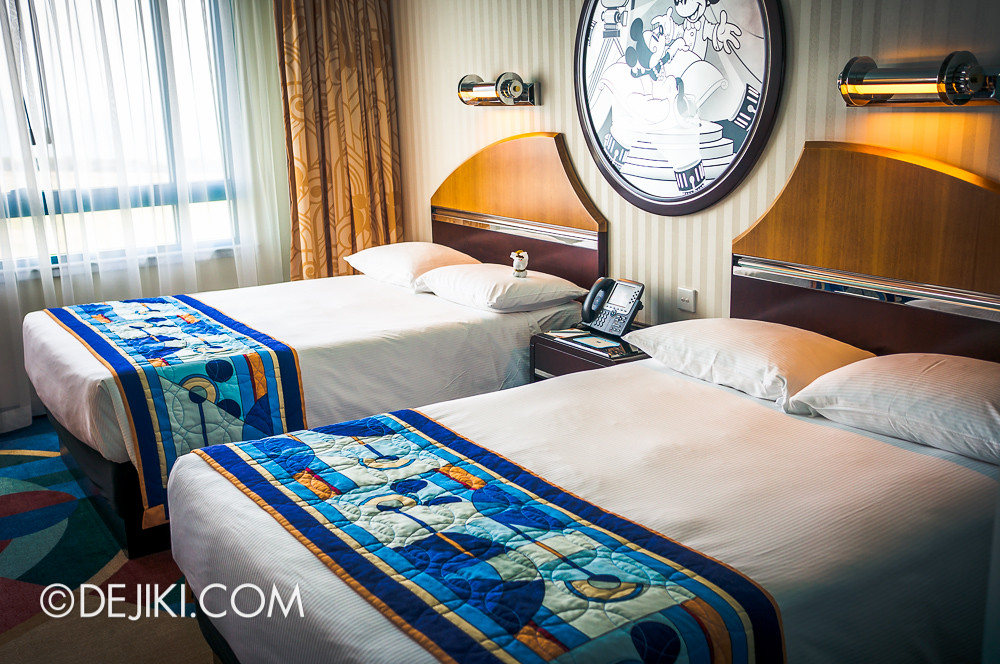 We were offered the Garden View Room. Spacious twin beds! 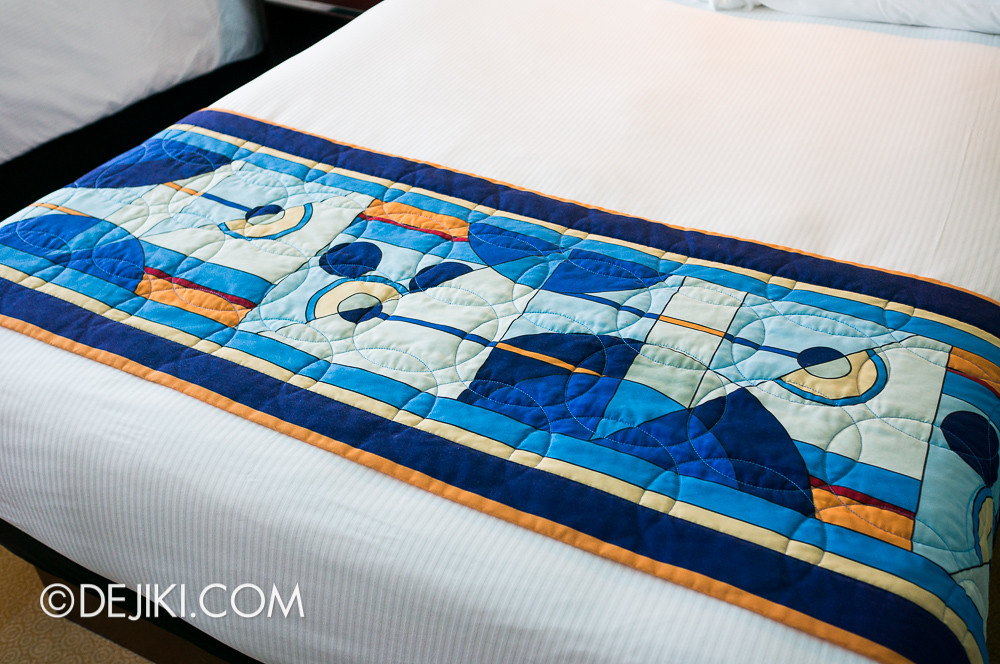 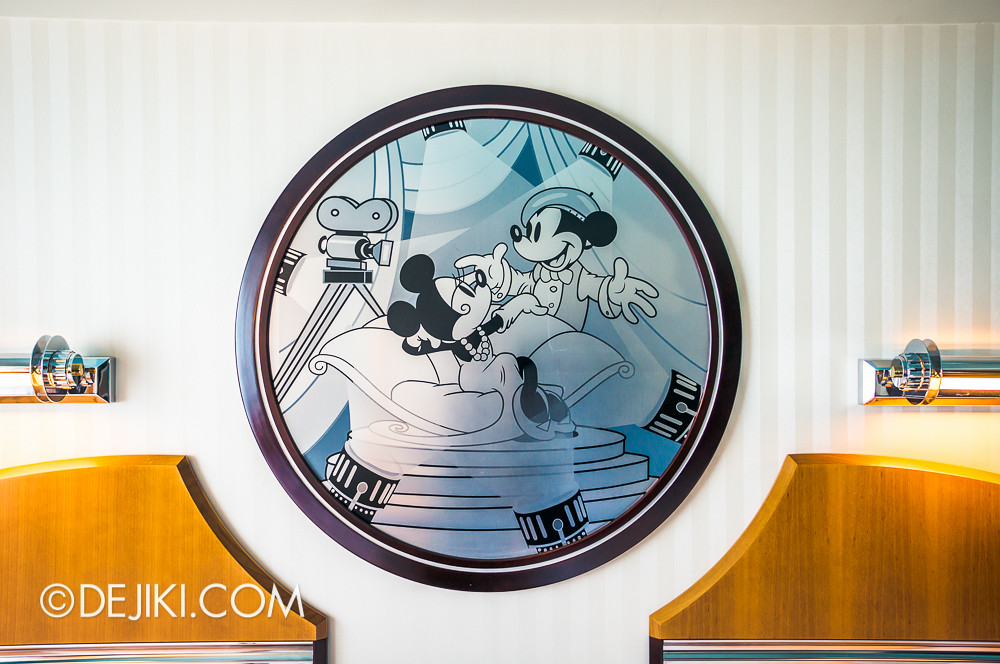 While there are lots of hidden mickeys, there is also this nice metallic mural of the old Mickey mouse. 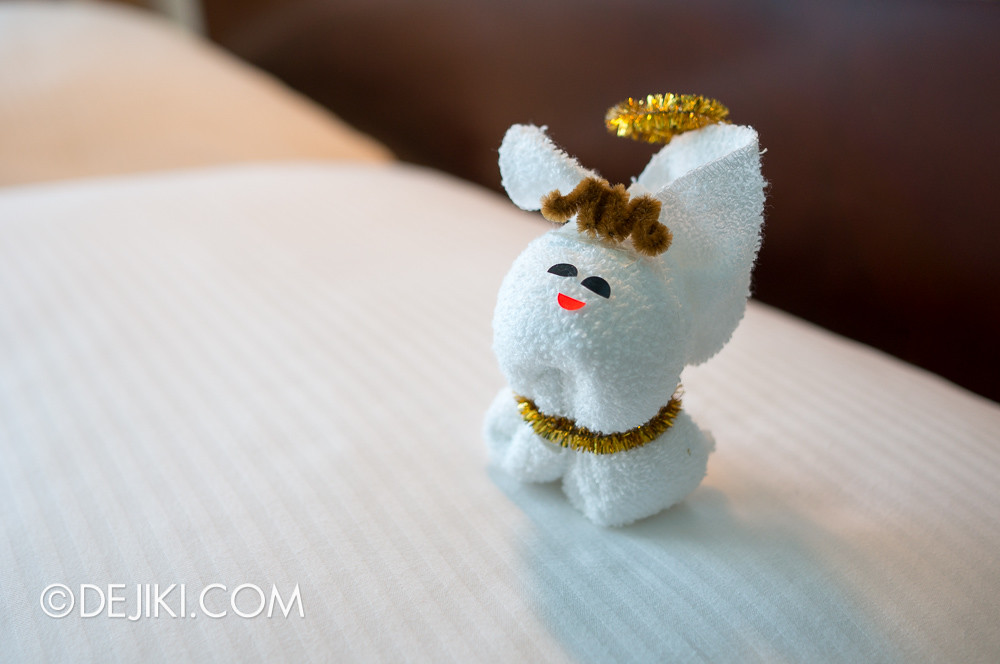 A lonely little towel animal on one pillow – I think this is a reindeer. After taking this photo, I left it on top of the room’s phone and it was there for the whole trip. 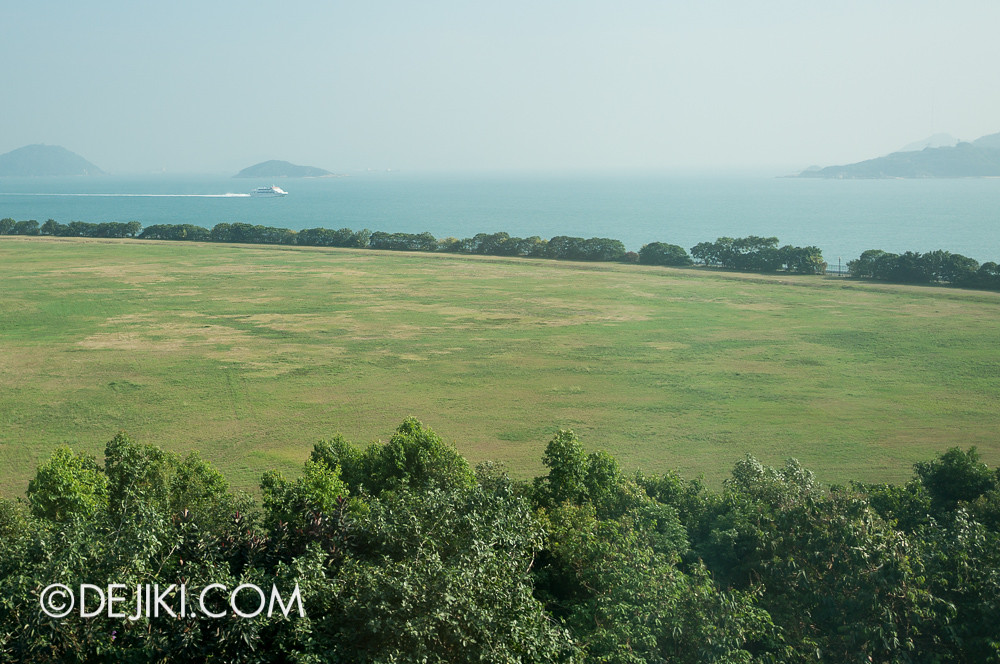 This was the view from our room – empty plot of land and the sea. So different from the usual Hong Kong Hotels I’ve stayed in – view of the buildings next door (or no windows at all).

Anyway this empty plot of land is reserved for further resort expansion. That is, HKDLR will build a new hotel here. 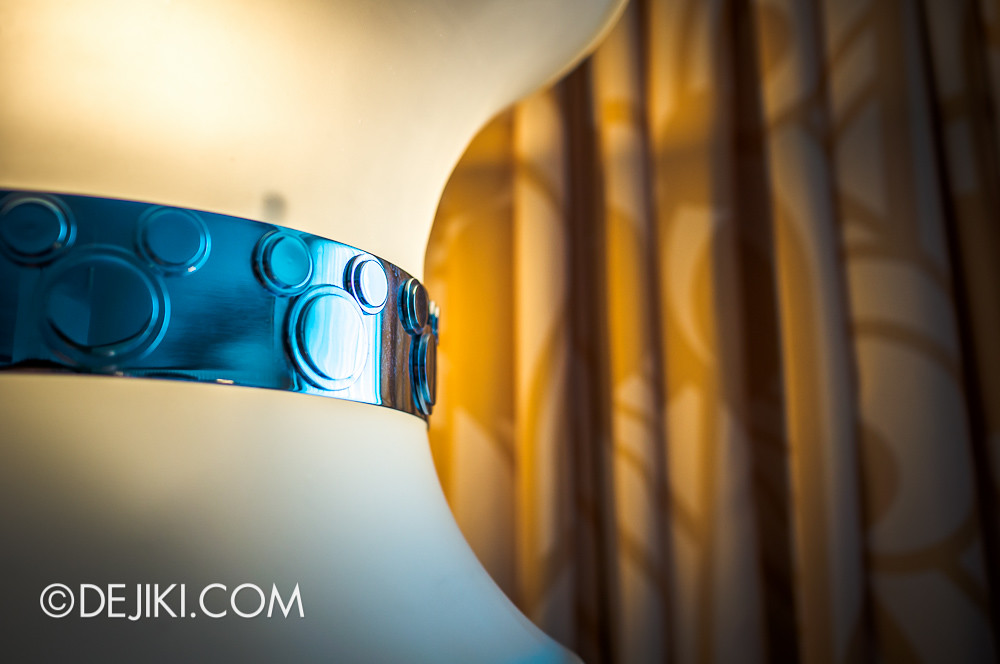 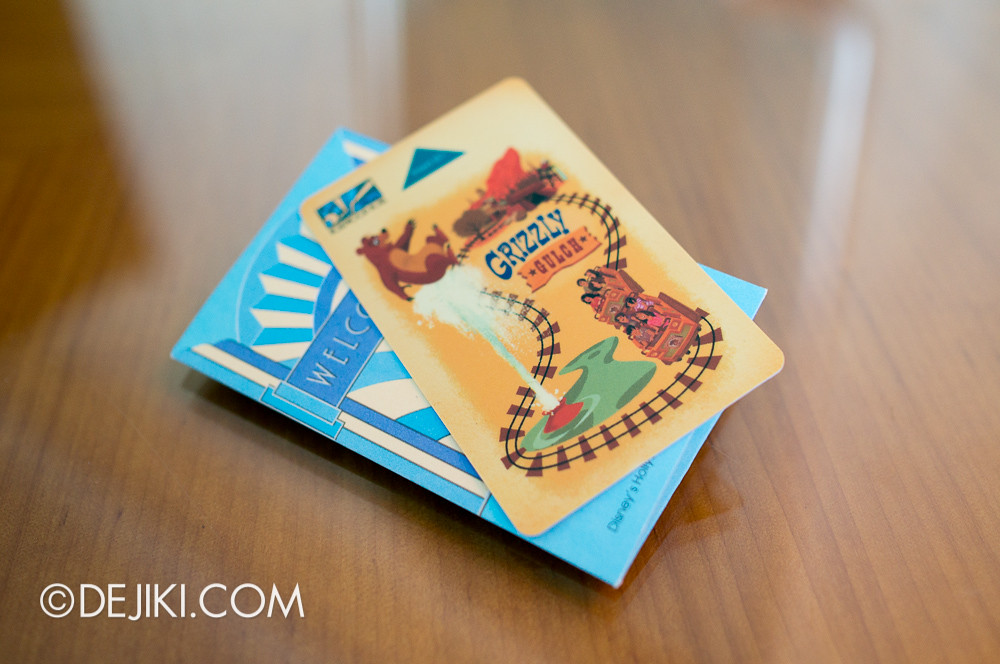 Anyway, these were the key cards given to us, featuring Grizzly Gulch! Our room also had a small amount of Grizzly Gulch-themed stationery. Needless to say, I’ve swiped them all. 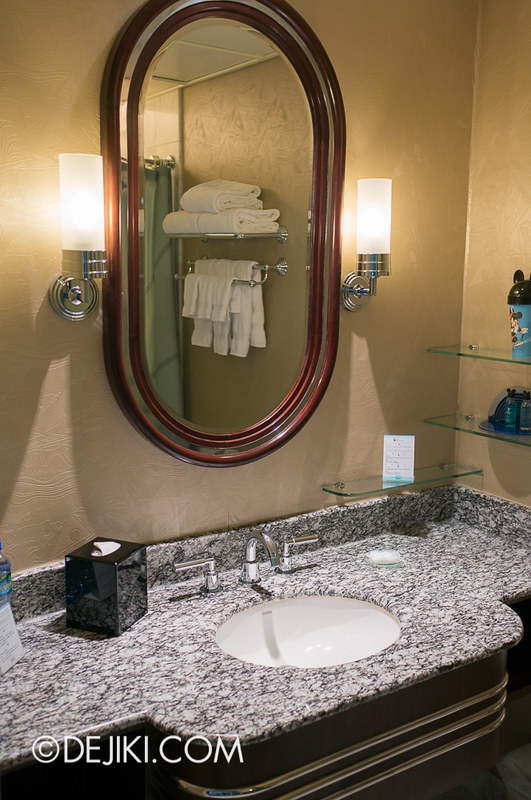 Next: Quick tour of the bathroom. You might notice how… empty the sink looks. Well at first we thought the Hotel forgot to place toiletries. Then there was this strange… cup. 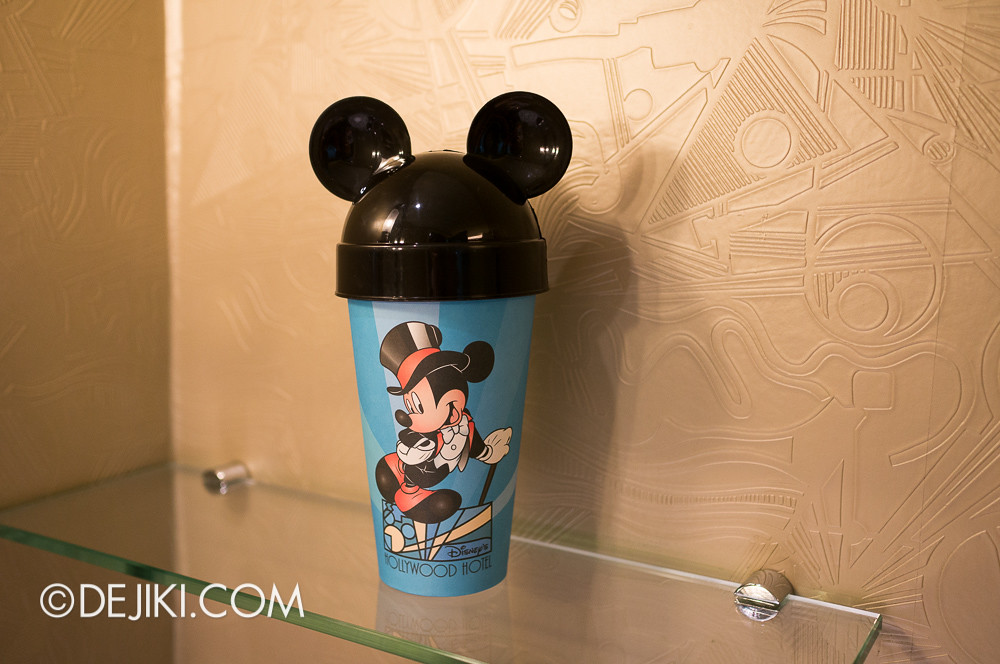 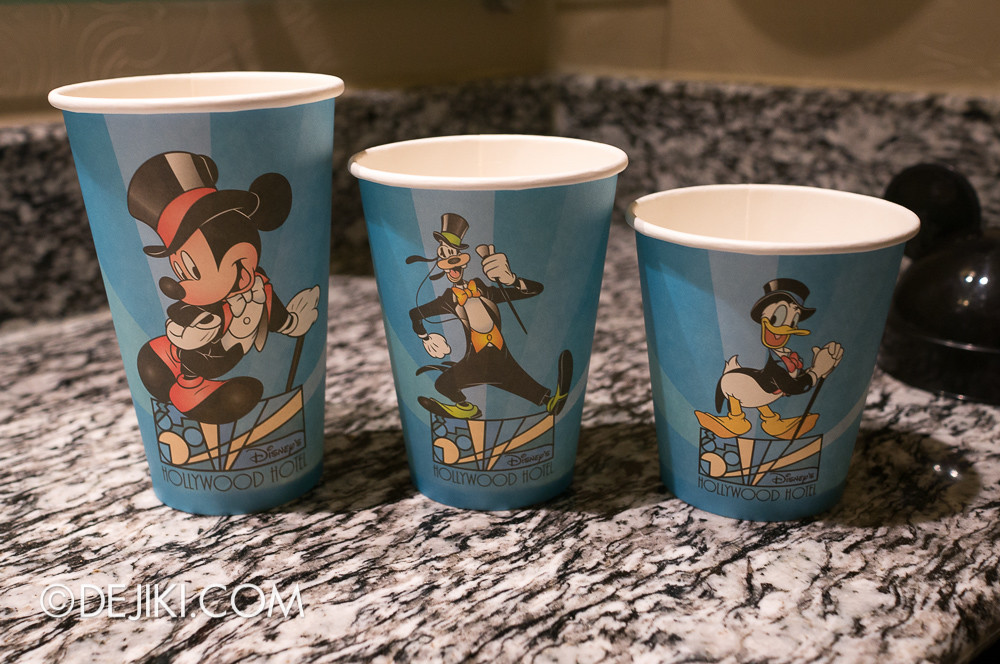 That’s the toiletries kit. Open it up and you’ll get three paper cups. Along with three toothbrush sets and the usual stuff. 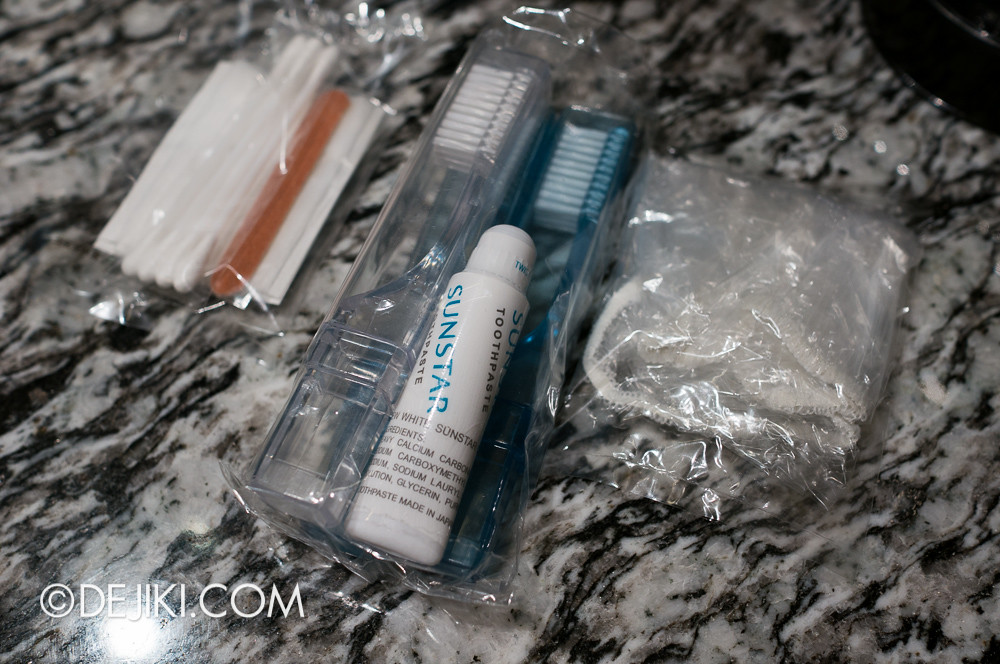 So apparently none of these things are expected to be used more than a day, because the next day we found a new stack on the shelf. 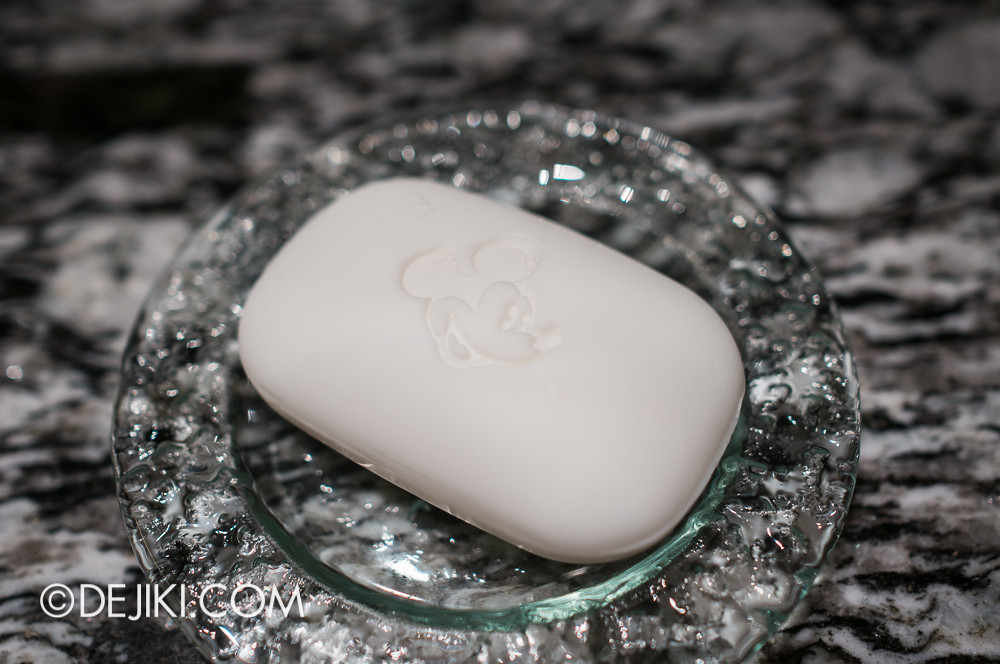 There’s also this bar soap marked with Mickey Mouse. We didn’t use this soap on the first day, but the hotel staff gave us a new bar (sealed in plastic) the next day. Well, I brought the unused stuff back to Singapore. Anyone wants them? 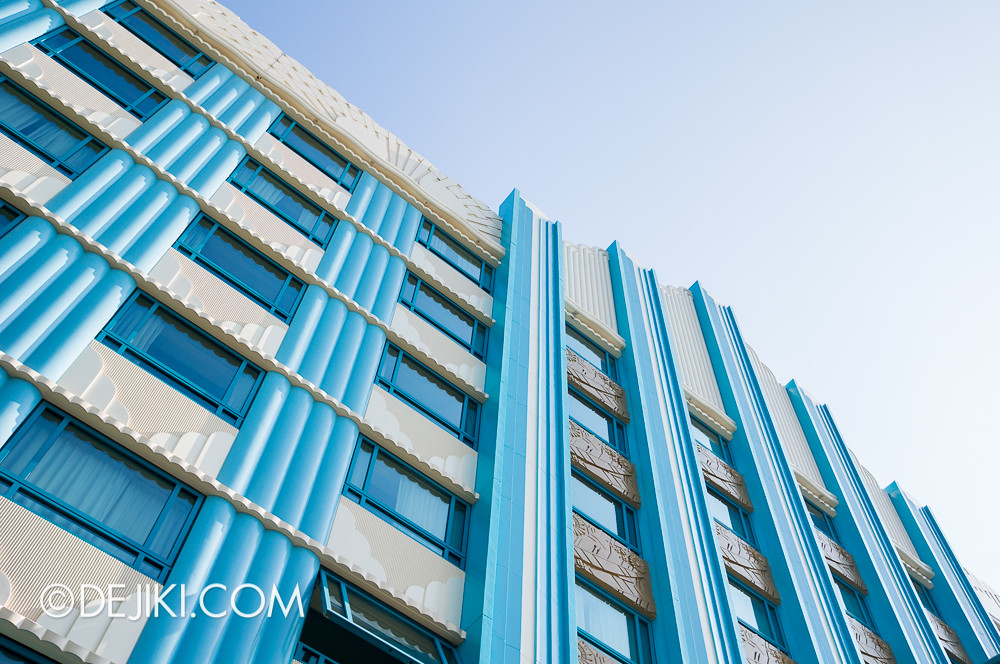 Let’s head outside and into the beautiful gardens of Disney’s Hollywood Hotel. 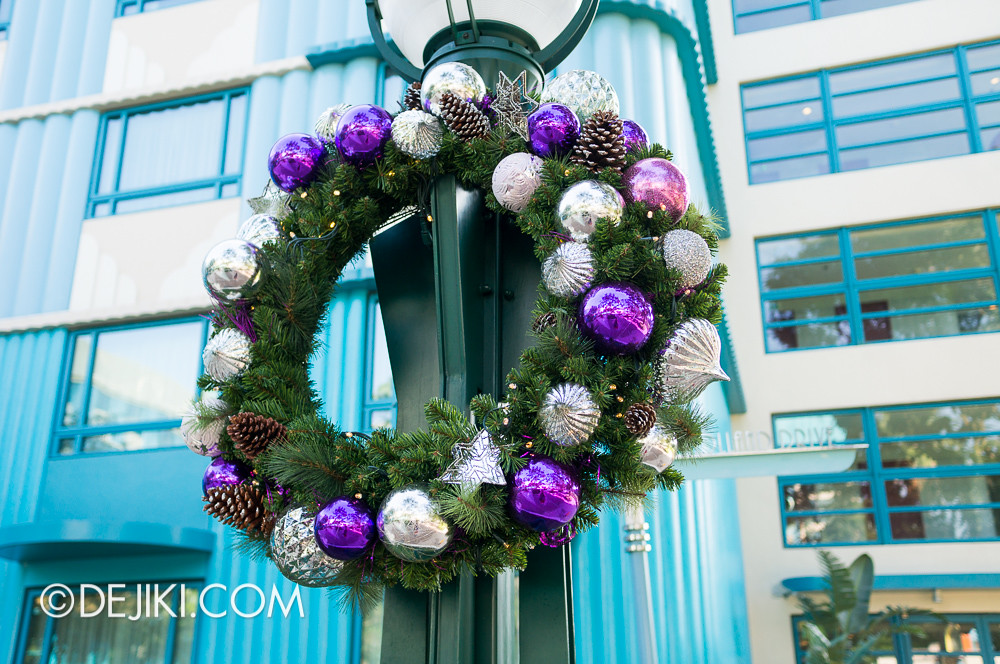 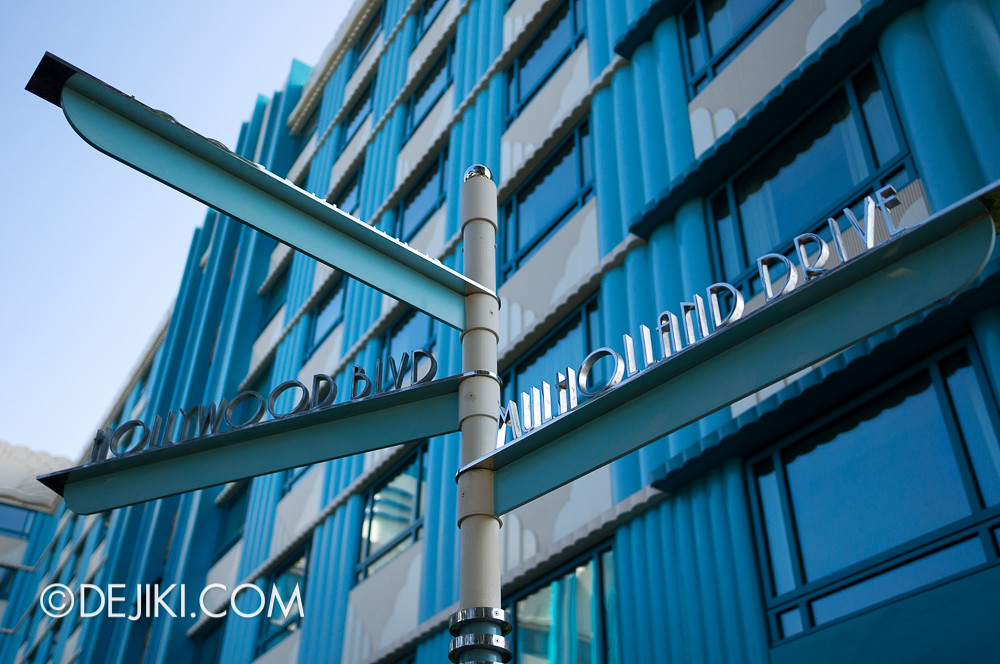 Numerous road signs from Hollywood can be found in the gardens. 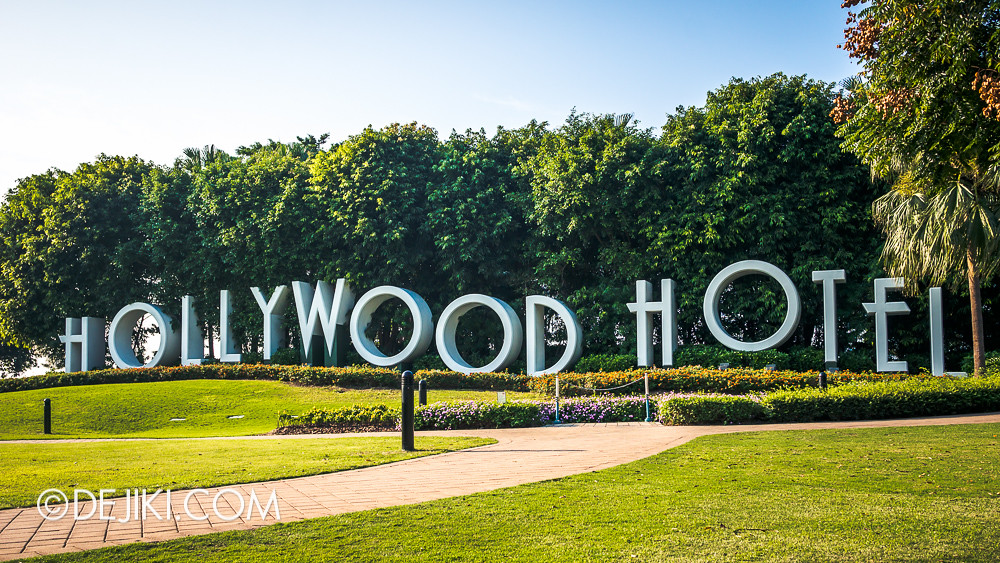 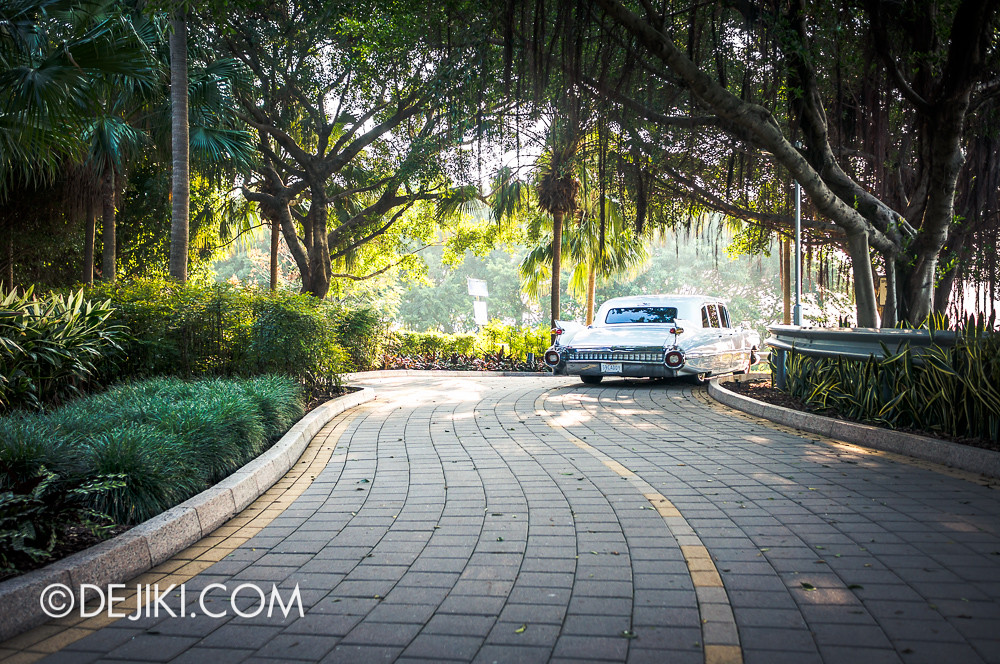 At the far end of the gardens are a few vintage cars. We found this area to be very empty in the morning, so it was a great place for photos. You’ll see them in a week or two!

Apart from the gardens, there is also an outdoors swimming pool, a small playground for kids and a video game arcade. Just for that impossible instance where Hong Kong Disneyland wasn’t entertaining enough. 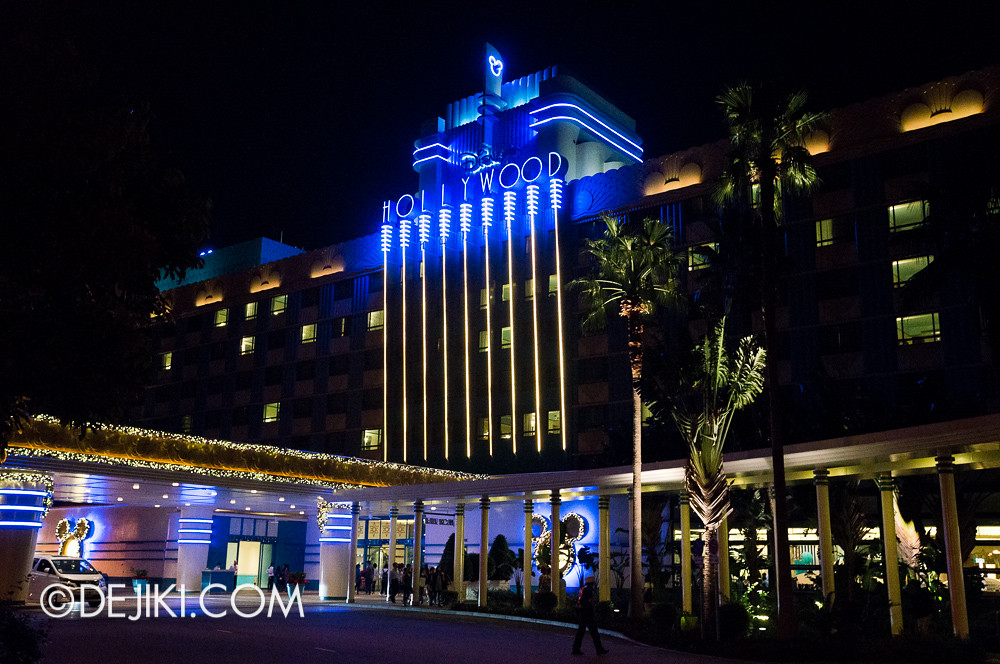 At night, the front of the hotel glows with blue neon strips.

Overall, it was nice to stay at Disney’s Hollywood Hotel. Nothing beats a quick return to the hotel after a long day at the park (although with Hong Kong’s efficient MTR, we’d usually get back to our usual hotel in Kowloon within 30 minutes). The Disney touches definitely made the experience at Disneyland feel more magical, since we spent entire days in Disney’s little sanctuary at Lantau Island. It was very peaceful and we didn’t have to care about getting to the park from Kowloon or Hong Kong Island.

There is another service unique to the hotels (which we didn’t use this time, due to our busy itinerary) called Package Express. You can buy items at Hong Kong Disneyland and have them delivered directly to your hotel room. Other park guests can also make use of a variant of this same service (we did, last year), which sends your items to a collection point at the park gates. Either way, it’s definitely useful for the shopaholic type of theme park visitors – buy all the big bulky stuff and never have to carry the shopping in the park!