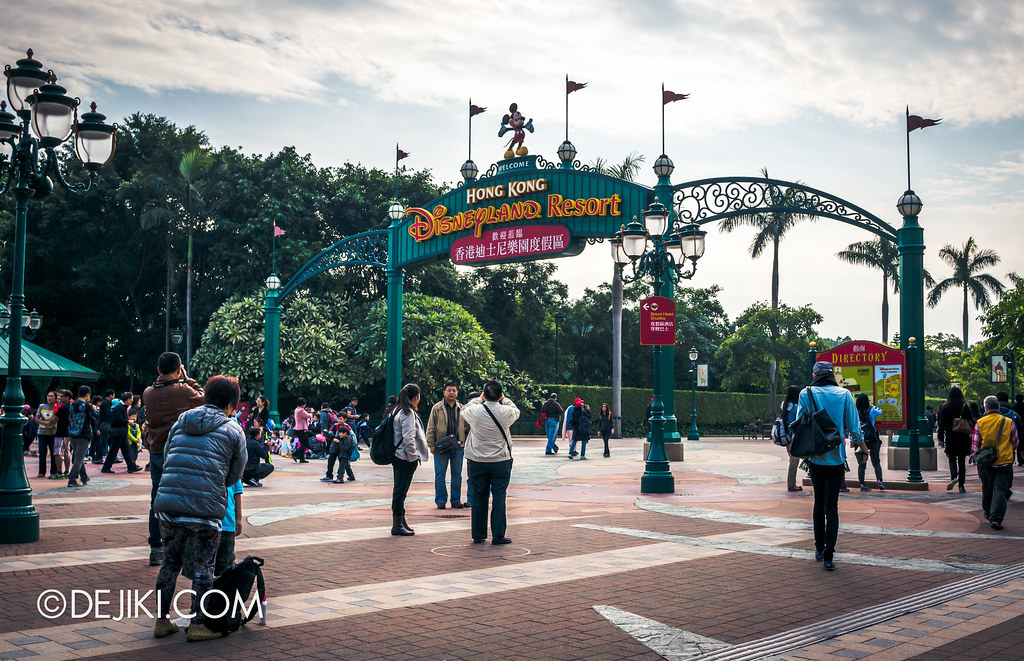 Hong Kong Disneyland is still one of my favourite theme parks. It’s not as large as Tokyo Disneyland, but still has Disney’s magical atmosphere. There’s an abundance of great theming, suitable area music and a lot of things for guests to see and do.

With the crazy amount of photos I took at Hong Kong Disneyland, I will write a series of features called Hong Kong Disneyland – 2012 Photo Tour. Each themed area will have its own entry, so you won’t need to sift through hundreds of photos in one post. For the first (or actually second, if you count the Mystic Point post), we’ll get to Main Street, U.S.A. 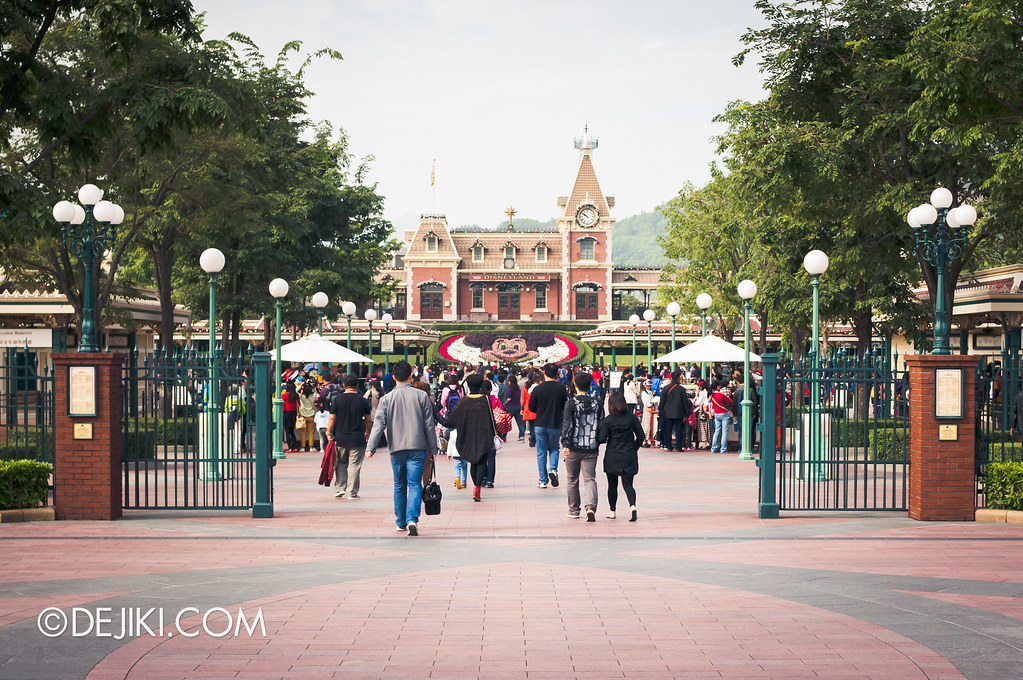 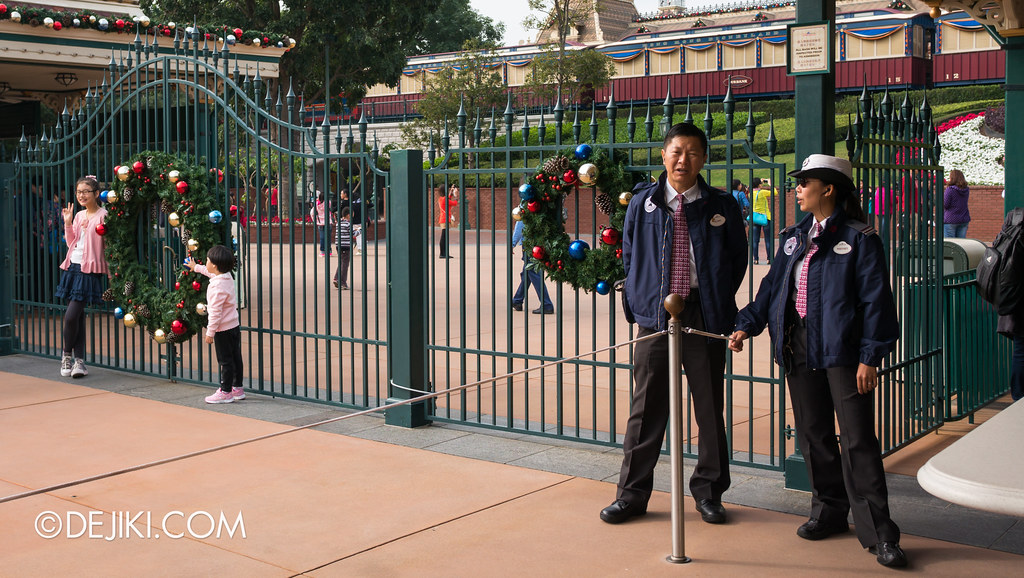 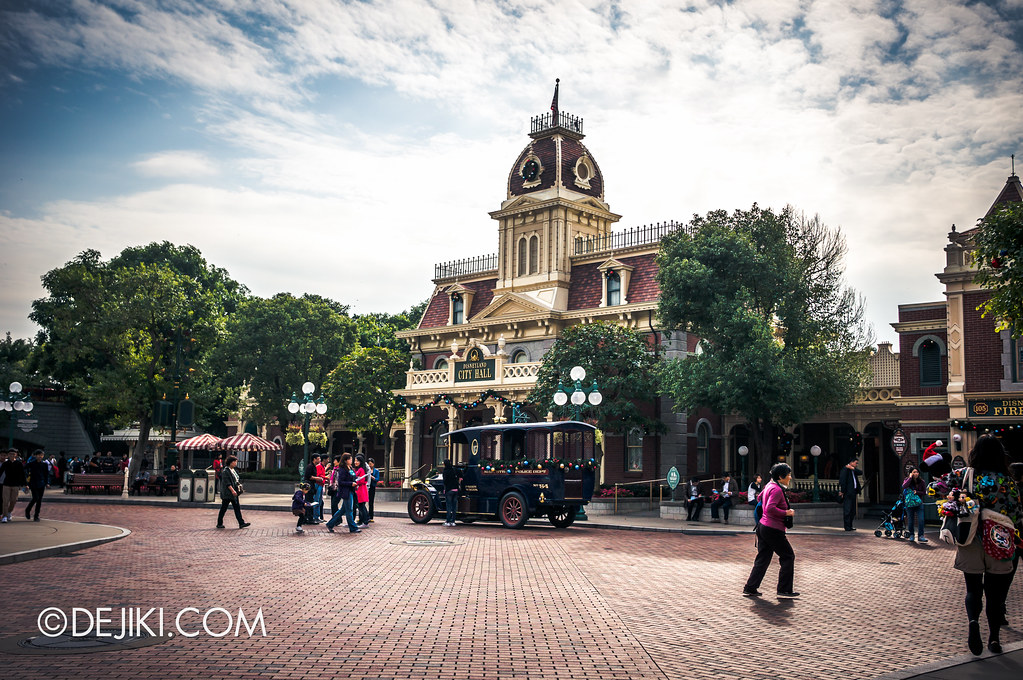 Upon entering the park, guests find themselves in Main Street, U.S.A., the “entrance themed land” for this Magic Kingdom-style park. This Main Street is very similar to the one at Disneyland (Anaheim). Set in the 1900s, this bustling street feels like part of a small town in America, filled with excitement and spirit of travel. 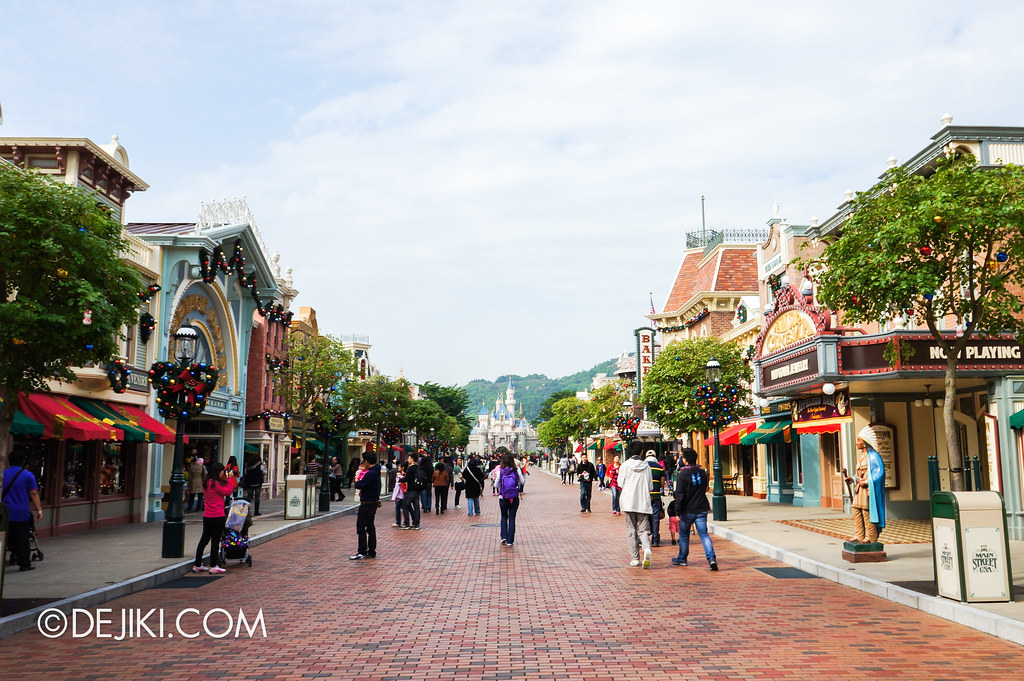 My sister and I did the most unorthodox thing in the morning. You see, we were handed out this square leaflet at the park turnstile – stating that there’s a 10% discount for merchandise in the park (see details below). We found out later that this unannounced discount campaign started the day we visited the park (7th December). Anyway, the deal is quite hard to resist, so we spent quite a bit of time at the Emporium at Main Street. 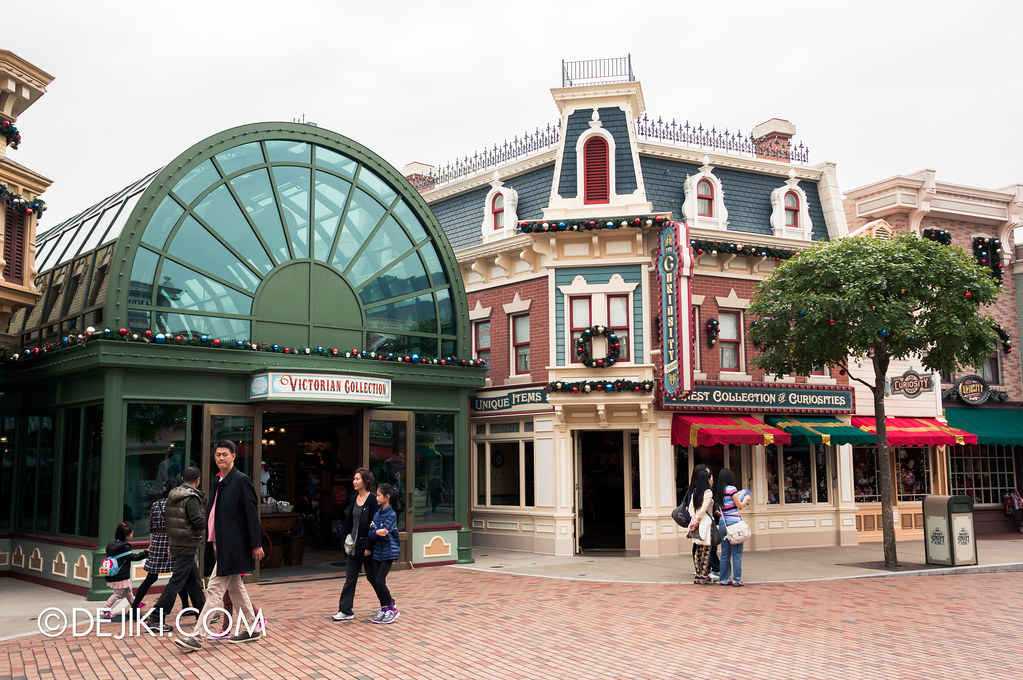 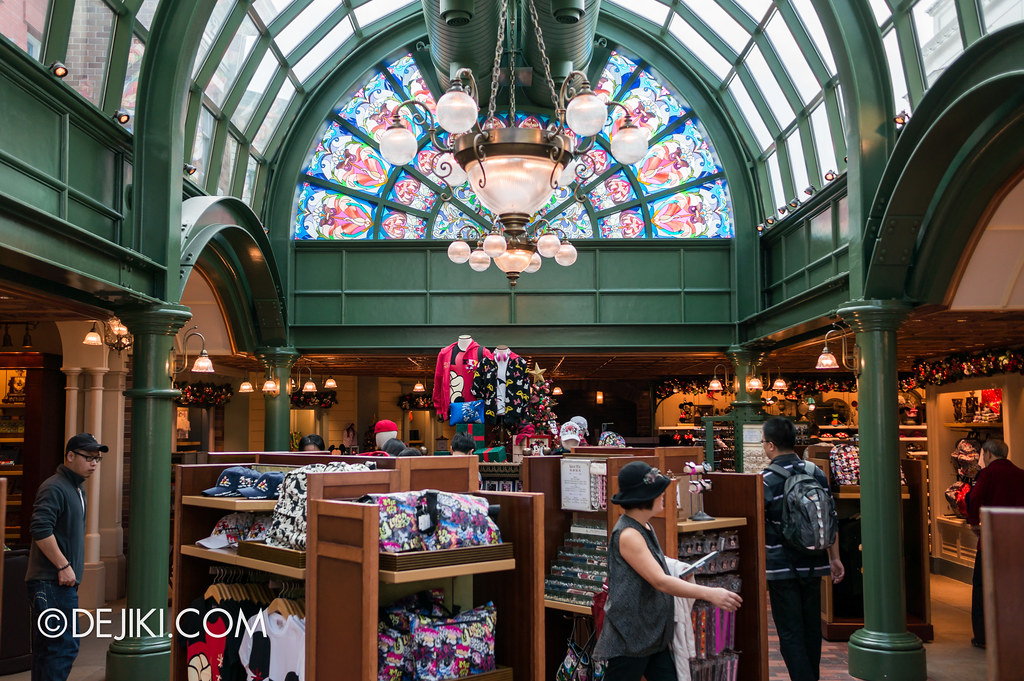 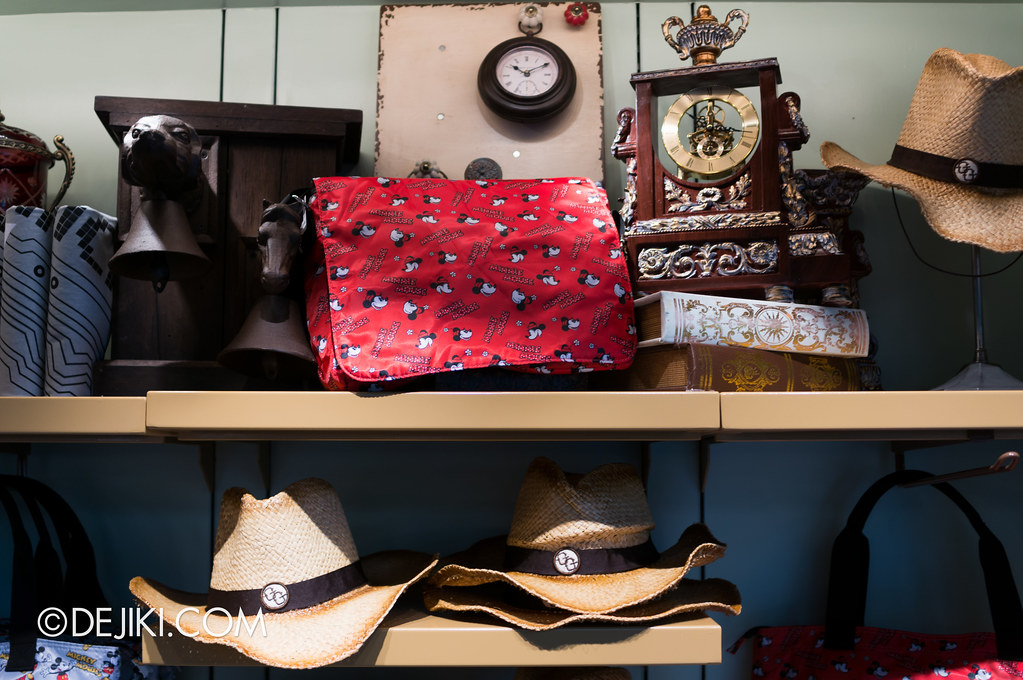 Special Discount for Merchandise in the morning

Guests can enjoy a 10% discount for purchases at merchandise shops, from the moment the park opens until 11:30am. All stores in Hong Kong Disneyland are participating except Midtown Jewelry. Shops at Resort Hotels and Airport Terminals are not having this promotion.

Terms and Conditions apply. Refer to the leaflet handed out at the park turnstile for more information. 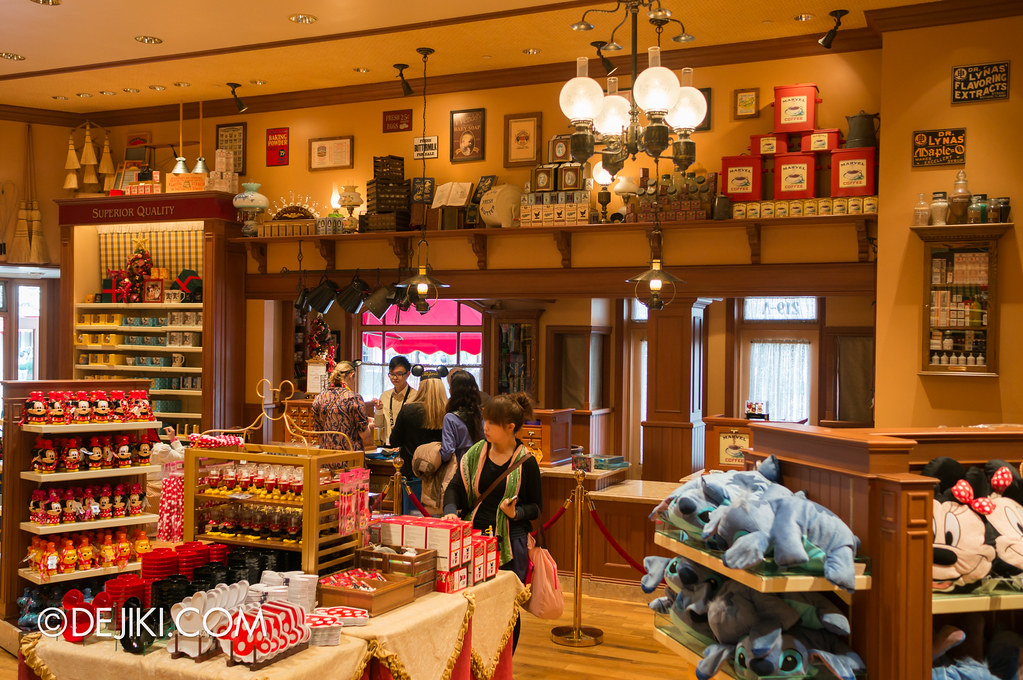 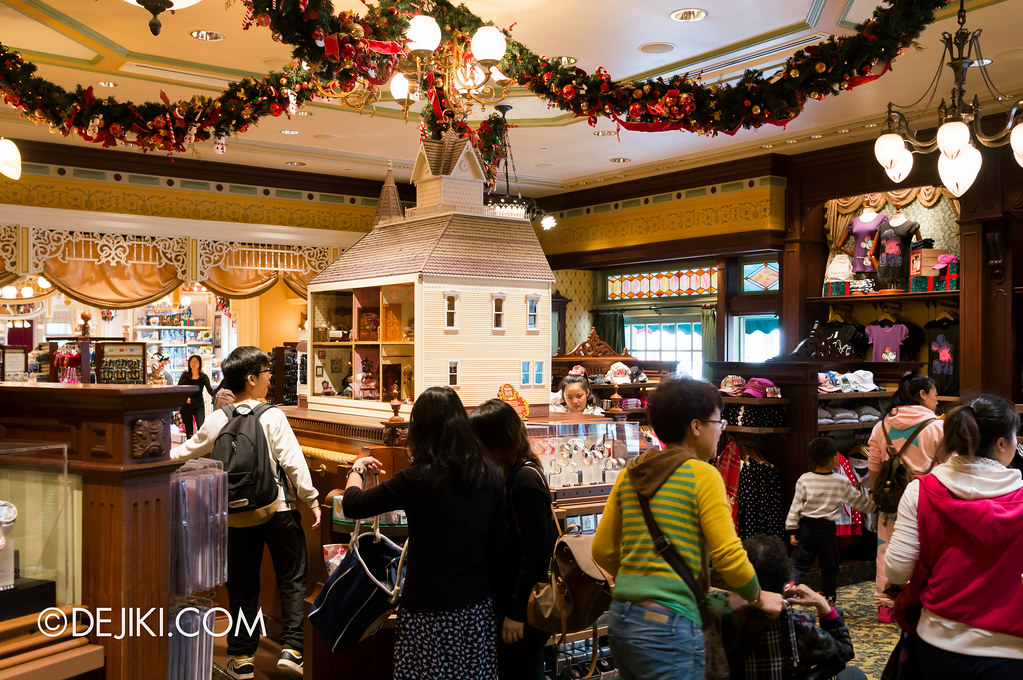 While this promotion is said to not apply to limited edition items, I was able to get 10% off my Jumbo Grizzly Gulch Limited Edition Pin (I’ll show you photos in the Grizzly Gulch entry!) 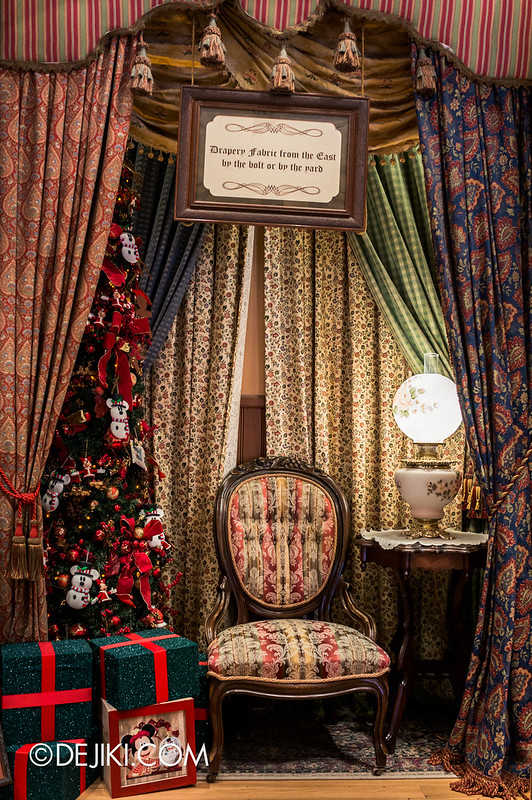 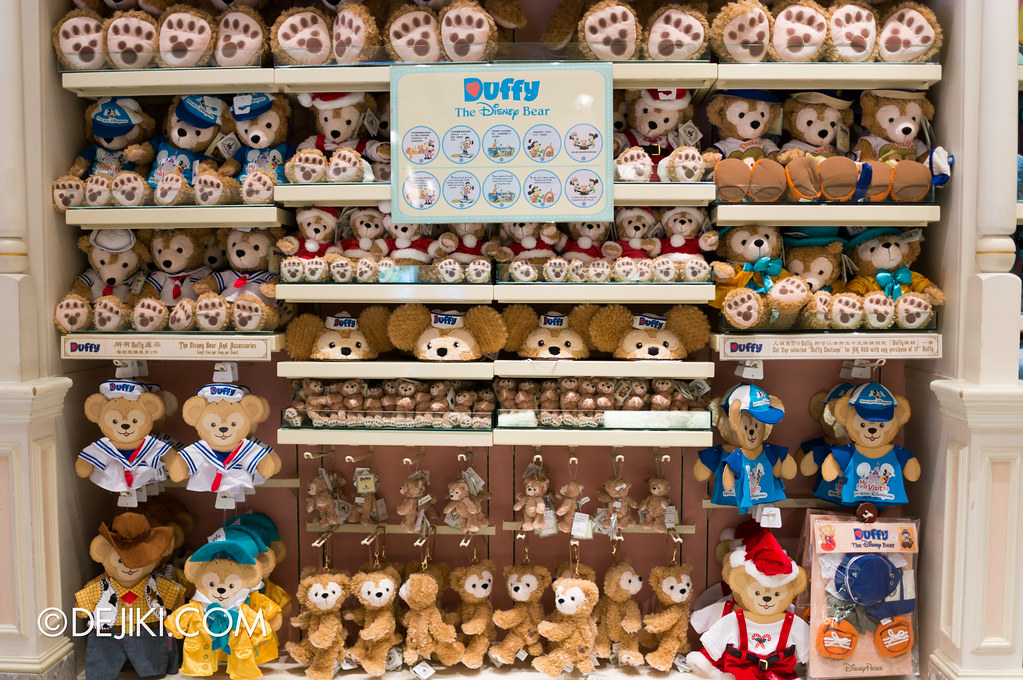 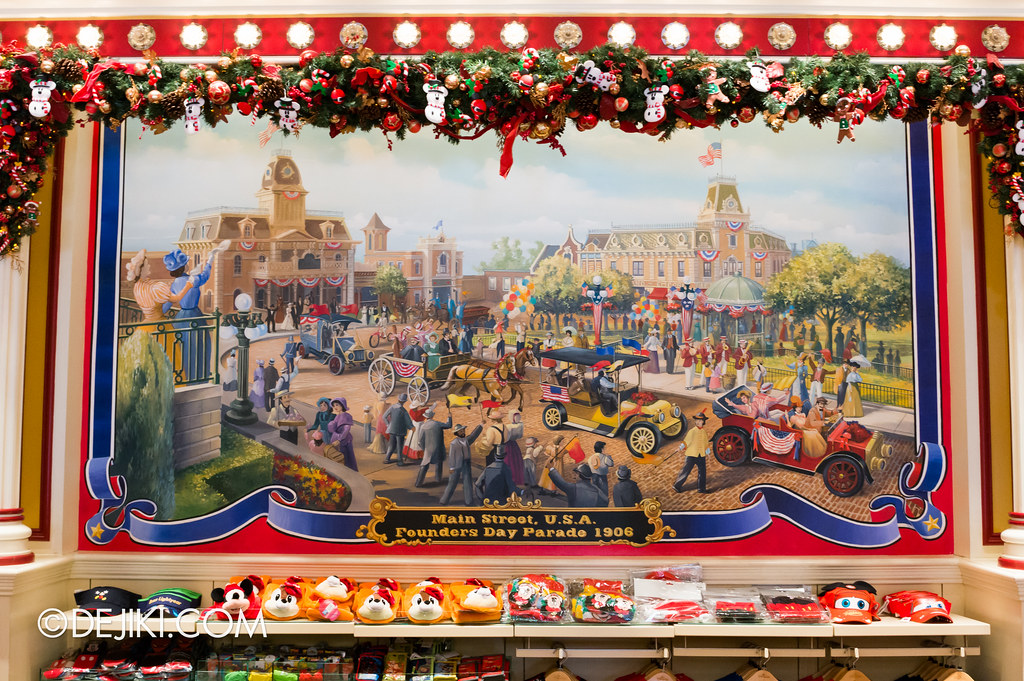 While the Emporium is the best place to get gifts and souvenirs, it doesn’t have everything. It’s perhaps the best place for last minute purchases (or if you already know what each individual store offers around the park). I really appreciate the effort that went into the design of this store. It doesn’t even feel like a store, but multiple shops with its own character. 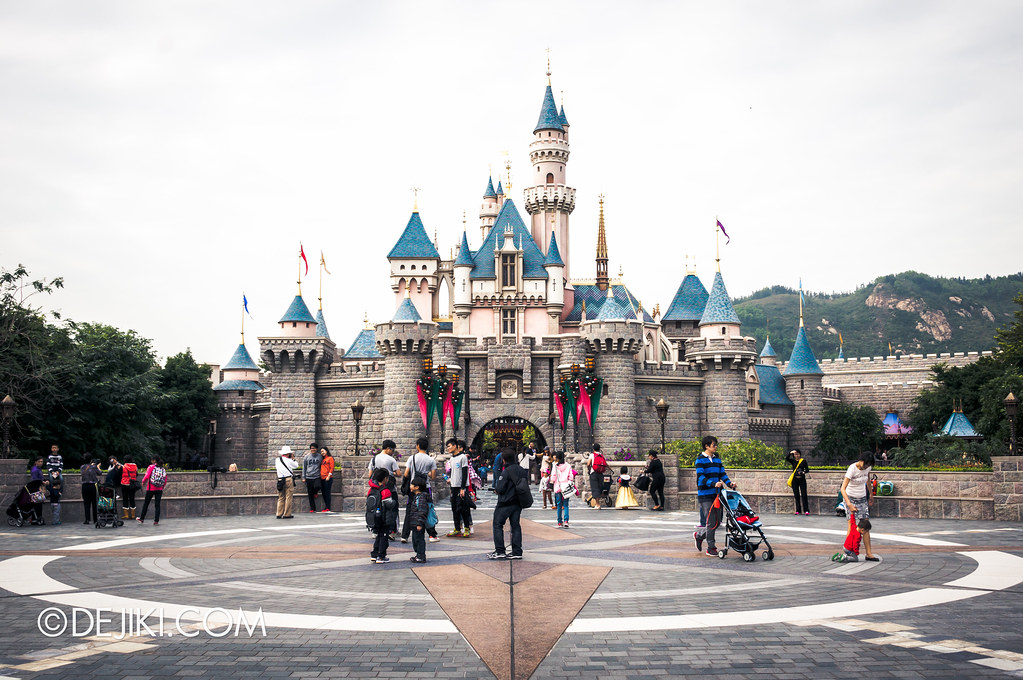 Sleeping Beauty Castle, viewed from the hub at the end of Main Street. With the mountains in the background, this castle looks incredible, as if it really belonged there.

(Of course, viewing angles and perspective matters. If you stand further away, the mountains would overwhelm the castle’s height) 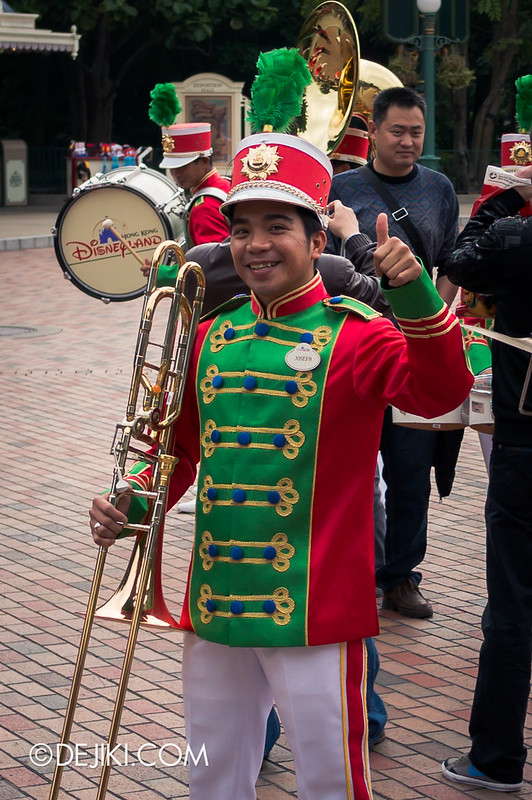 There are a number of cast members here interacting with guests. They are not Disney characters, but characters of the themed land itself. Add that to the list of things I wished USS had.

After the early morning shopping, we sent our big bag of items to Package Express. This is a complimentary guest service that allows guests to pick up their purchases at park exit at the end of the day.

Despite describing how Big Grizzly Mountain is a more interesting rollercoaster, my sister insisted on the “Space Mountain as the first thing” tradition. So we ran to Tomorrowland for that. After that (and Buzz Lightyear Astroblasters!), we went to Grizzly Gulch. On the way, we made reservations at Main Street Corner Cafe. We wanted to dine there after we saw photos from another blogger (who shall not be named) and realized that we should give the usual fast food a miss. 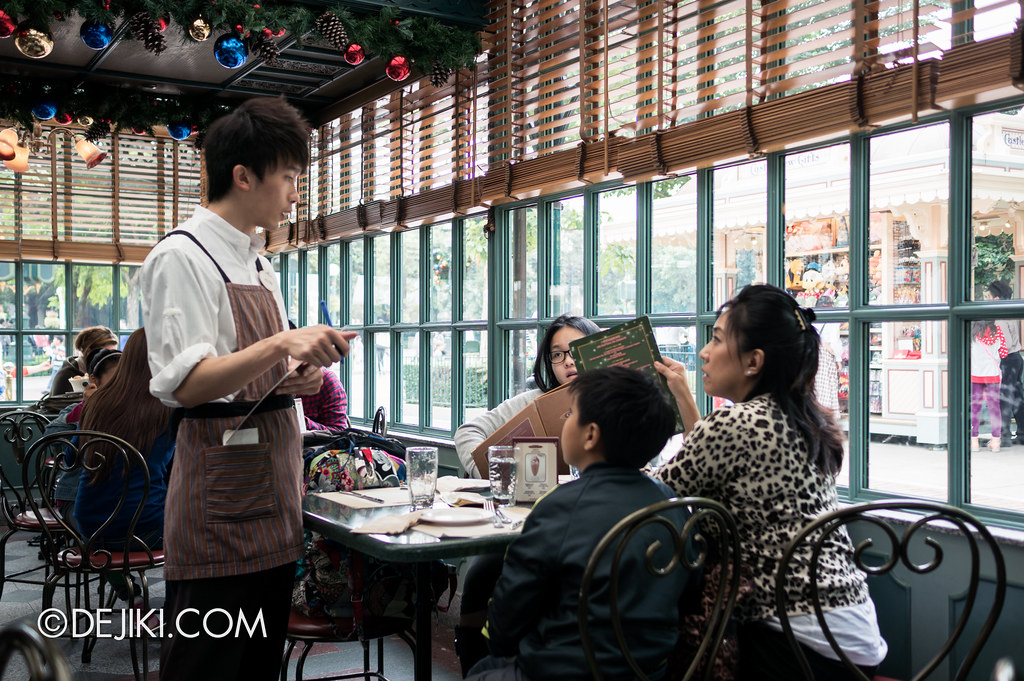 The park’s restaurants don’t really do reservations, but something called Priority Seating at Hong Kong Disneyland (and other Disney parks, actually). This is more accurately, FastPass for restaurants, to provide guests with minimal wait for a table. You return at the chosen time and will be put on a priority waiting line. Usually you’ll be the next to go unless someone else is also doing the same thing. It makes sense to just leave your name for Priority Seating, because if you don’t do so, you will have to join the standard (Stand-by) line, which can get really long. 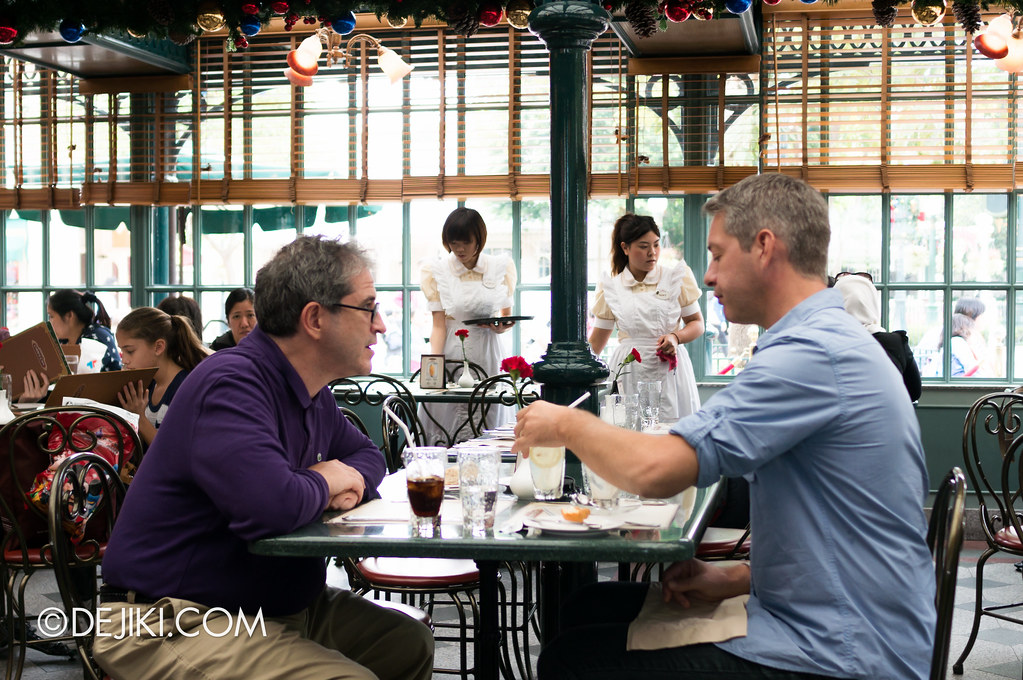 The Main Street Corner Cafe is split into 2 areas, an ordinary dining room and another one “outside” that’s set in a “greenhouse” for some psuedo al-fresco dining. It’s fully covered and air conditioned, though and offers view of Main Street and part of the Castle Hub. 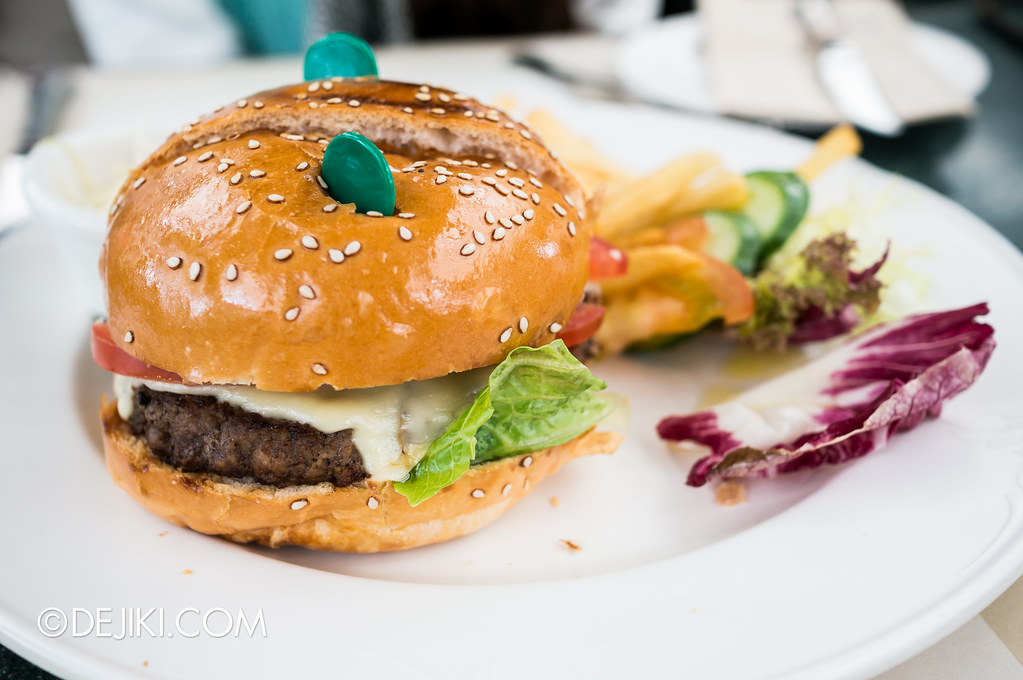 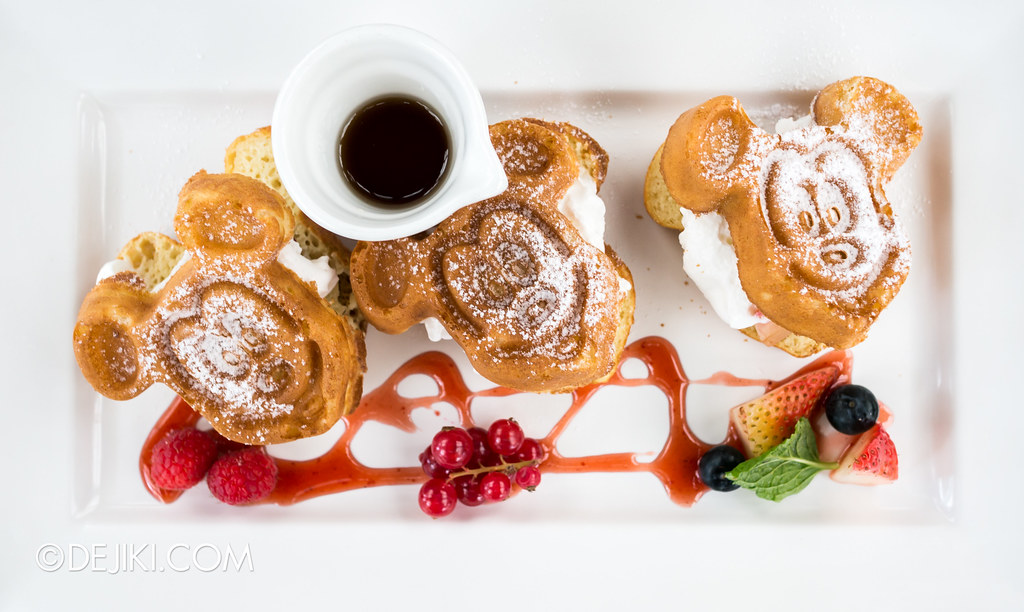 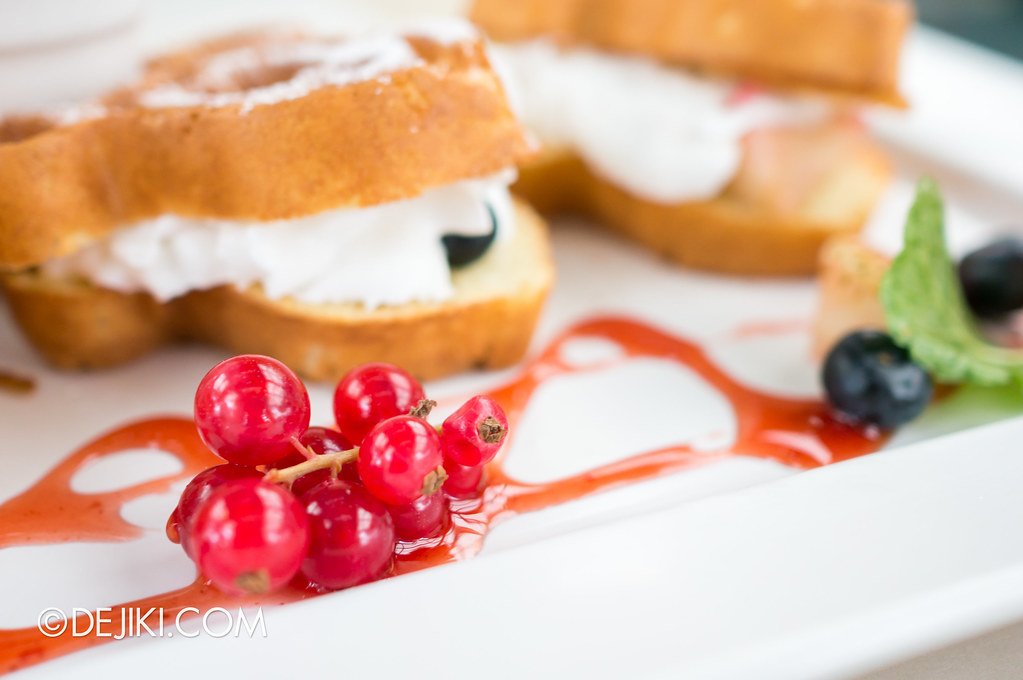 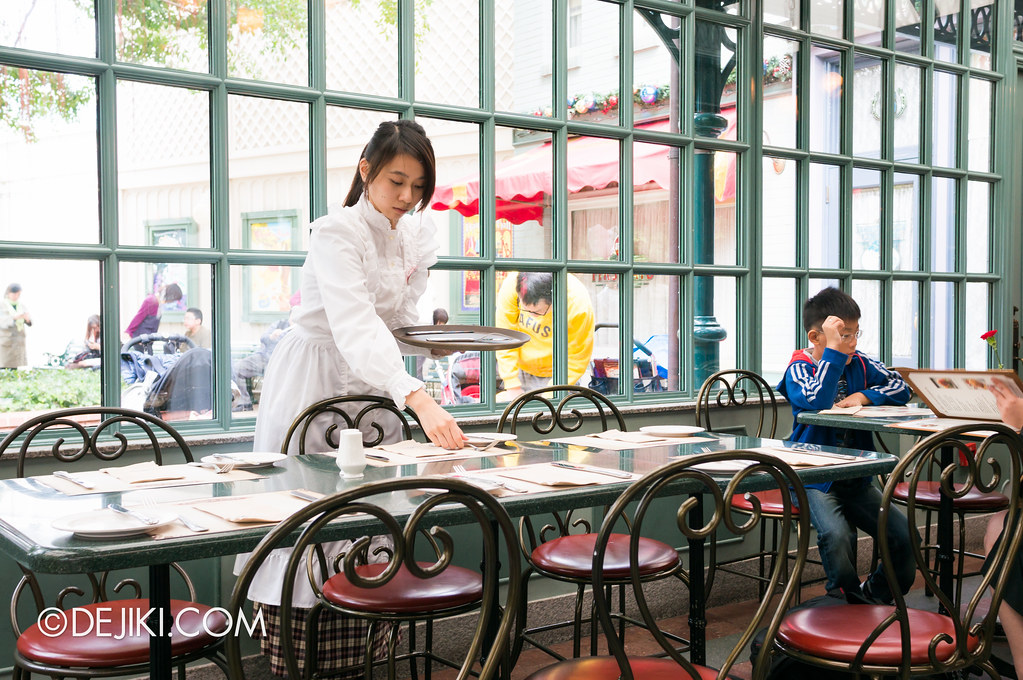 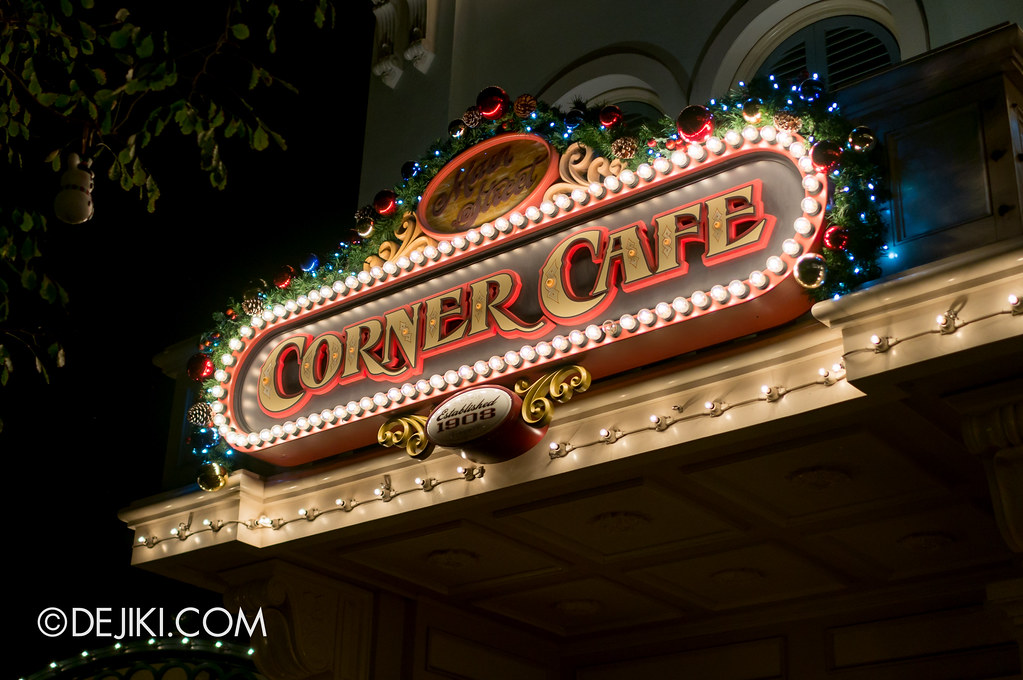 Time for some night photos! 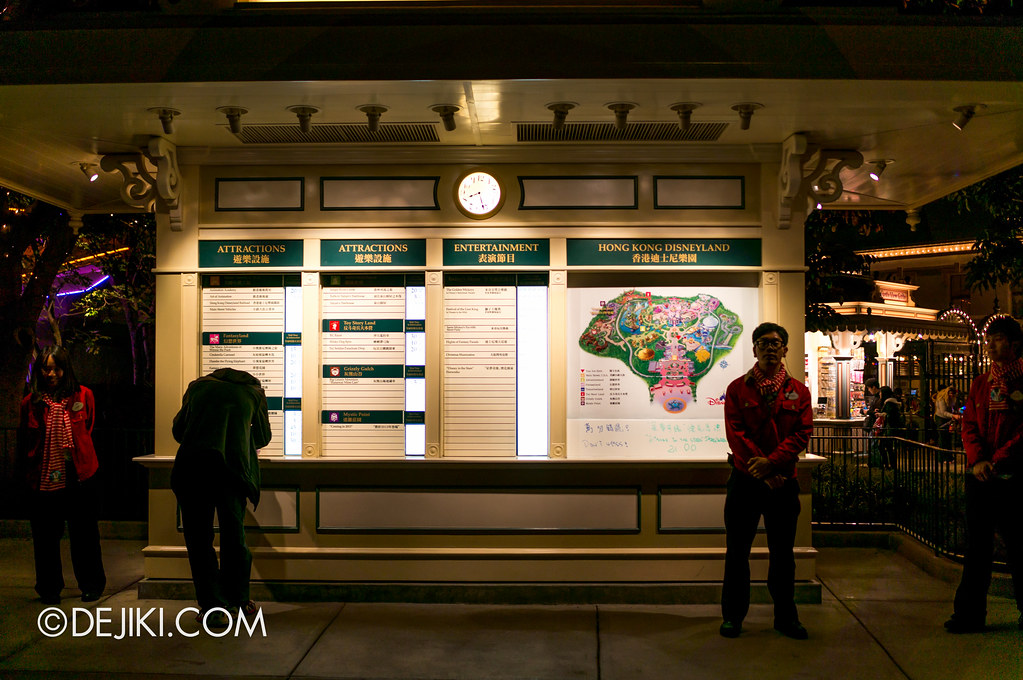 The Time Board at the Castle Hub area displays wait times for all attractions and show timings. It was upgraded with an electronic display, but instead of going the Universal way (unthemed LED boards), it preserves the same look as the earlier version (where cast members had to change the numbers, individually, using small magnetic cards). 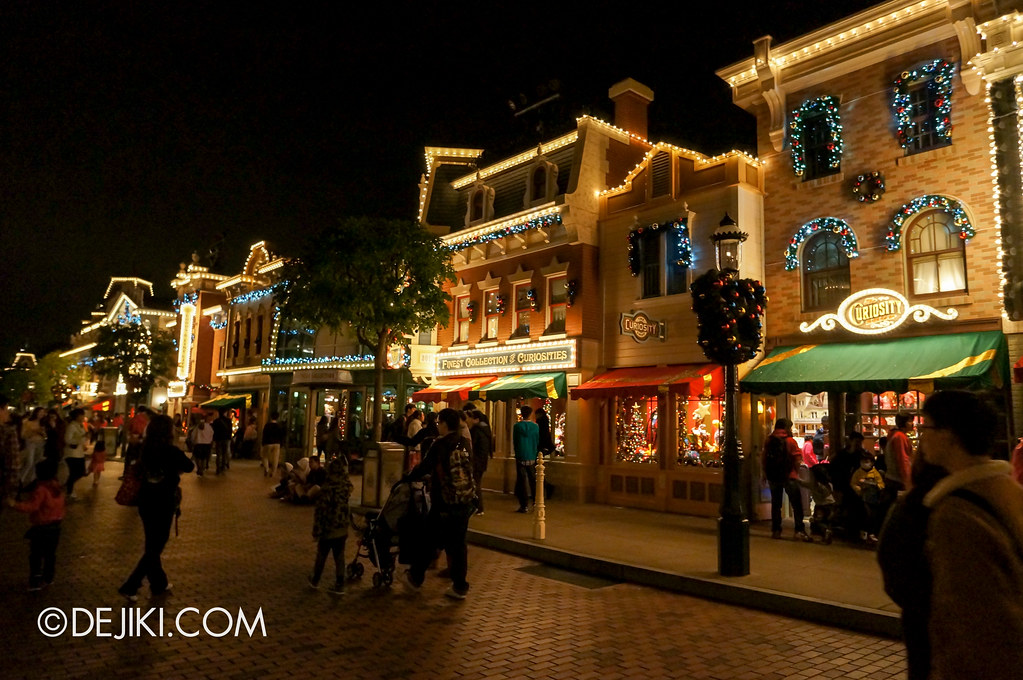 Main Street looks amazing at night. There’s a lot of decorations, and they feel “right”, you know, as if the stores were real and they decorated it themselves. It’s not just about hanging random decorations in the middle of the street. 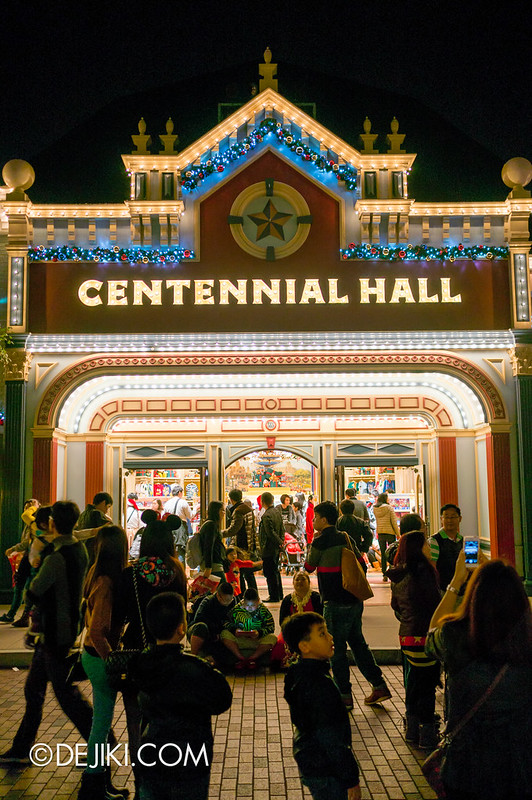 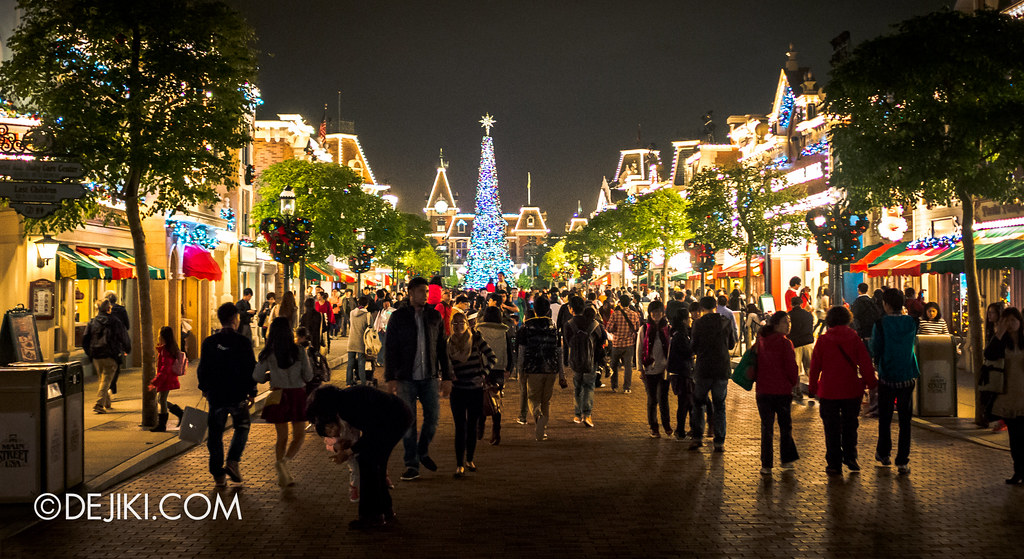 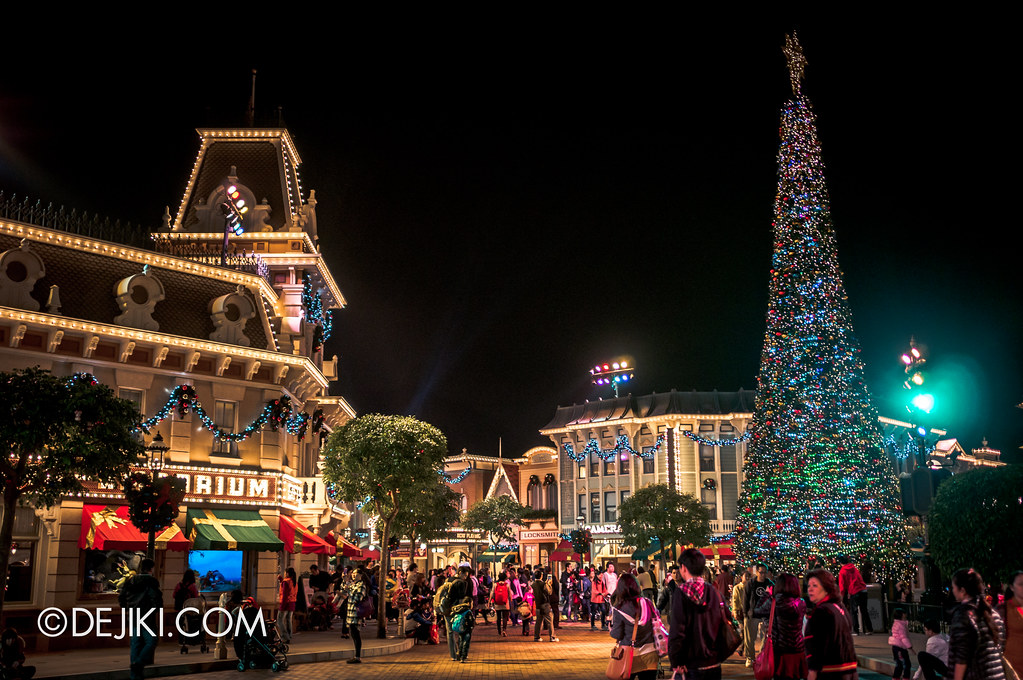 Sometimes, it snows at Main Street. I think it happens during and after the Christmas Illumination event, which happens daily around 6:45pm. Snow falls at the “Main” street, as well as around the City Hall area. The effect feels more magical than in USS (New York zone) because of the open air design of the street. It creates the illusion that the snow is falling from the sky. 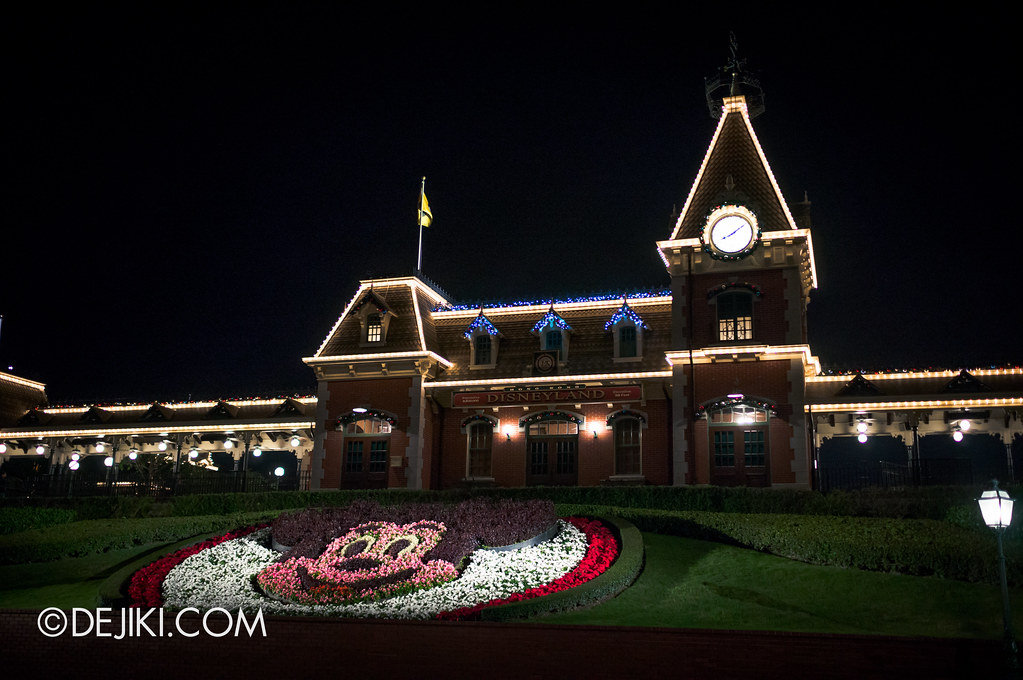 In the next Hong Kong Disneyland 2012 Photo Tour, we will travel to Toy Story Land and meet Andy’s toys.