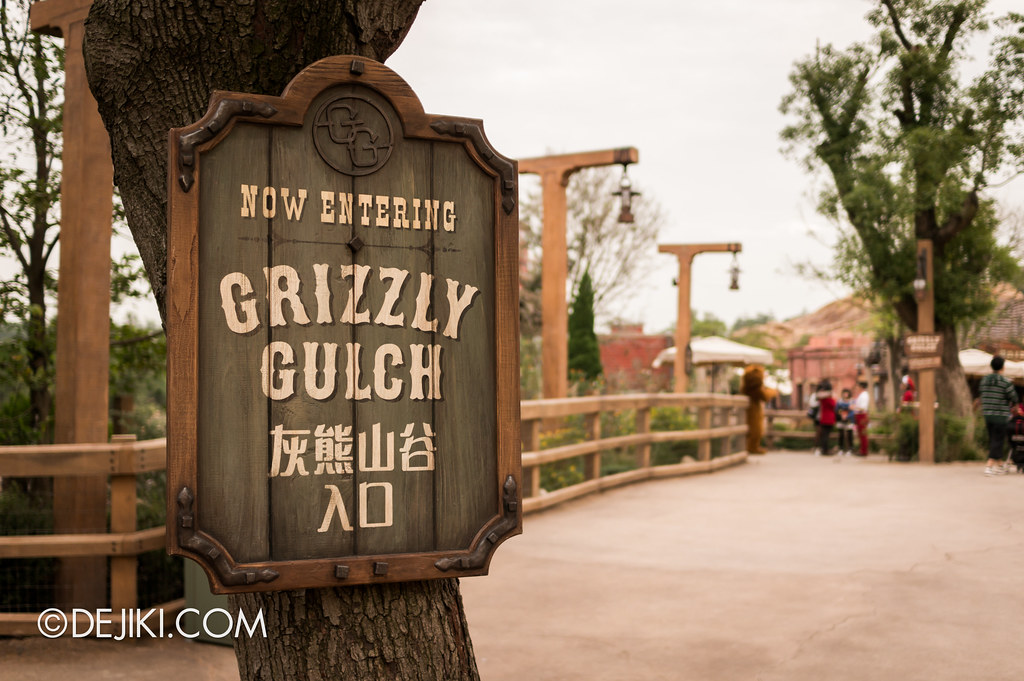 Founded on 8 August 1888 (the luckiest day of all time) by prospectors hoping to discover gold, Grizzly Gulch brings travelers to a bustling Wild West town filled with adventure and prosperity.

Grizzly Gulch is the Frontierland of Hong Kong Disneyland. Every other Disneyland park has a “19th Century American Old West town”, complete with cowboys, saloons and Big Thunder Mountain Railroad. But there wasn’t a Frontierland at Hong Kong Disneyland. Instead of building a copy as part of the park’s major expansion, Grizzly Gulch was designed and built instead. Initially named Grizzly Peak, this immersive wild west experience will be unique to the Hong Kong park.

At the moment, Grizzly Gulch is my favourite place in the park, because its attractions, theming and narrative are closely integrated together. The Big Grizzly Mountain is a fun outdoor roller coaster that has a nice mix of fun, thrills and story. The theming here is quite incredible (although there are some areas where work appears to be rushed, but I won’t nitpick here) and certainly has the magic sparkle that is so exclusive to Tokyo Disney Parks.

This area also introduces a cast of unique new characters, such as the three bears: Rocky, Mother Lode and Nugget as well as Lucky, a Golden Retriever.

The entire area is roughly split into 2 sections: A quiet path overlooking Grizzly Gulch (near Adventureland), and a bustling town (near Mystic Point). Let’s take a look at the town area. 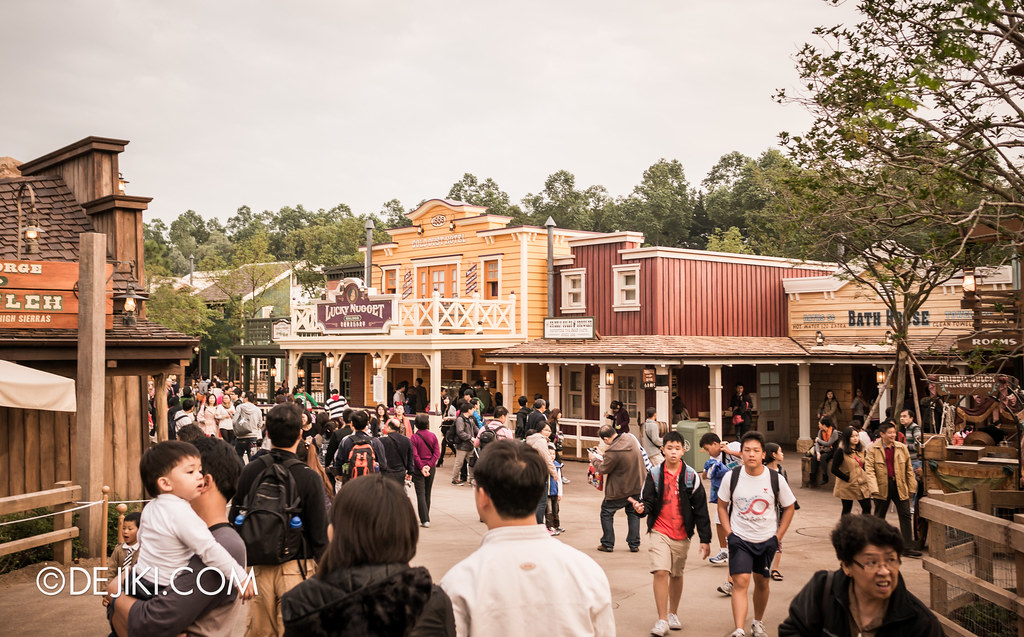 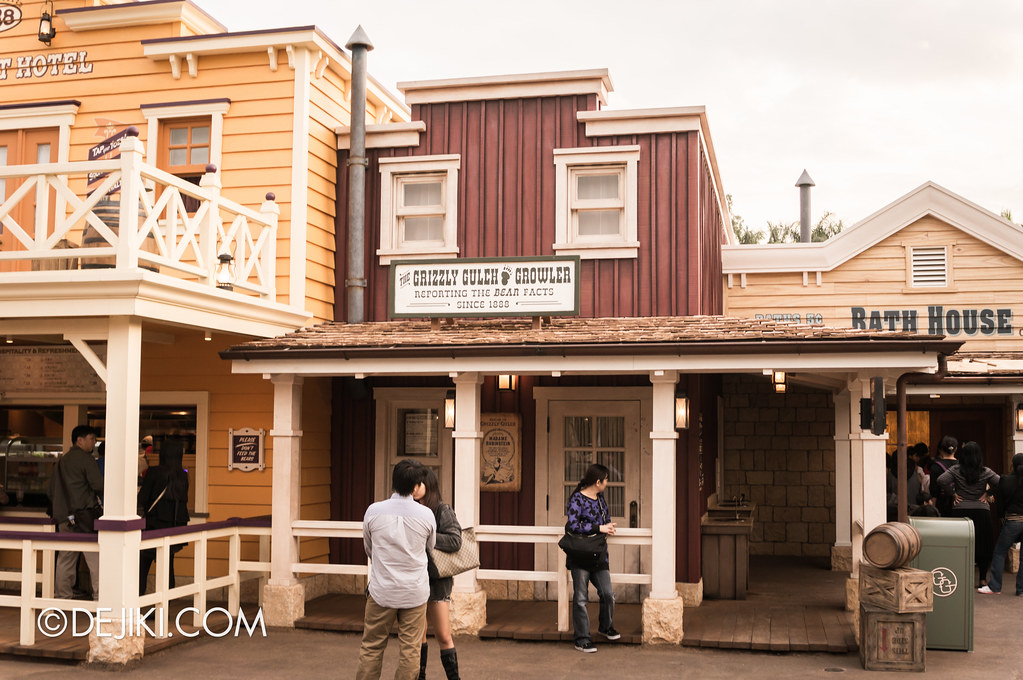 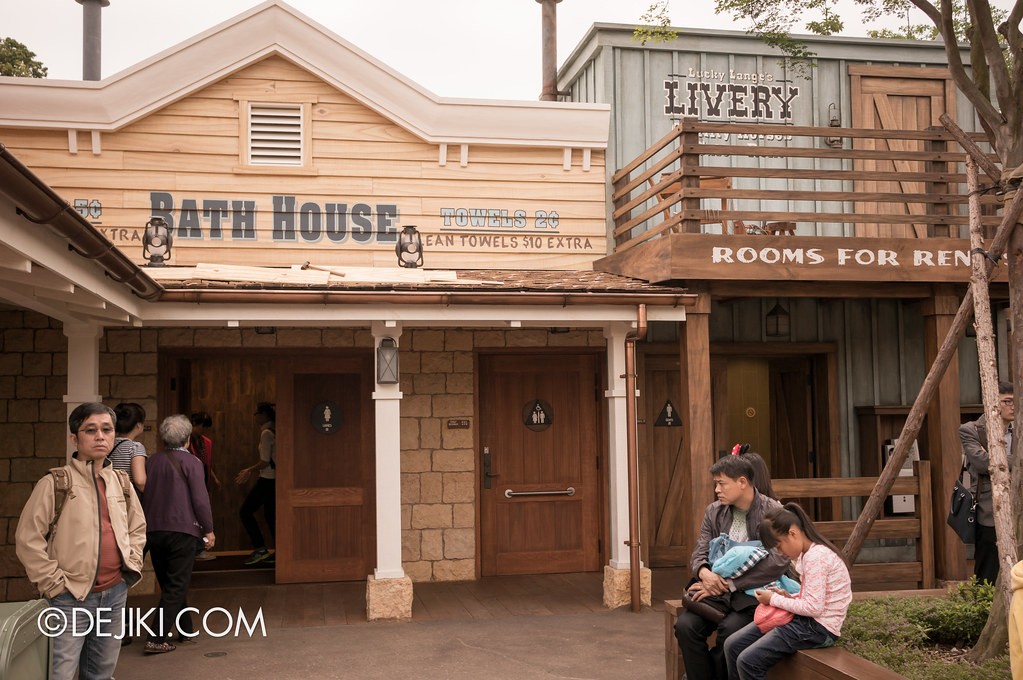 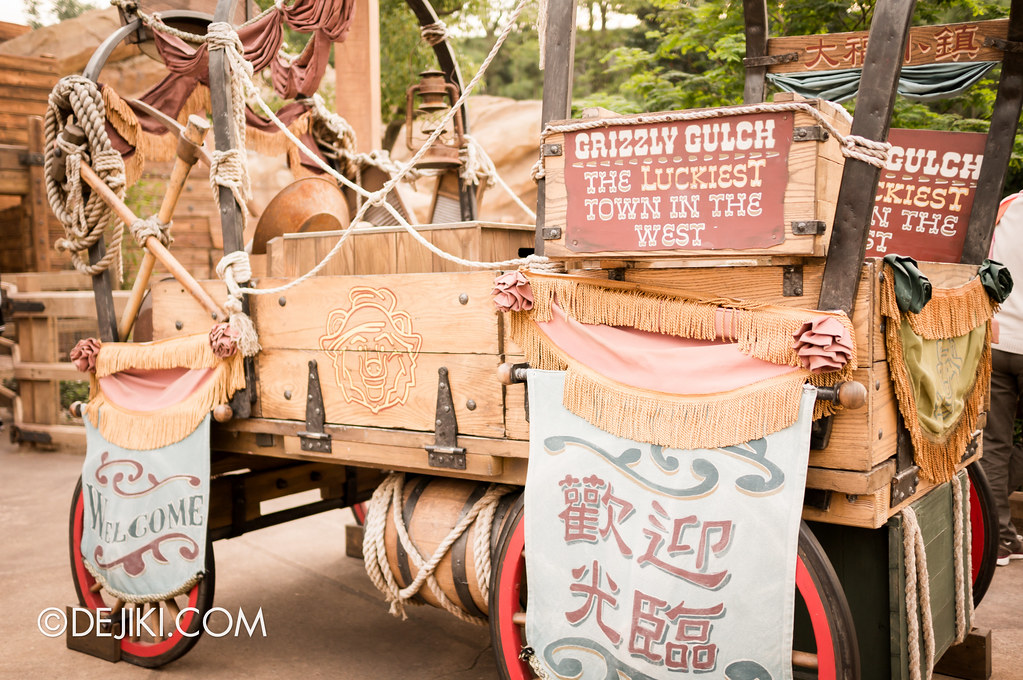 There are ample opportunities for character Meet and Greet in this area – Disney characters (Mickey, Minnie, Chip & Dale) and some bears (Kenai and Koda – these are from Brother Bear, not the same as the three bears on the Big Grizzly Mountain ride). For entertainment, there is the Welcome Wagon Street Show, where some of the townspeople sing and dance. There’s also Grizzly Joe, who performs a one man show, but I didn’t managed to catch him at the area. 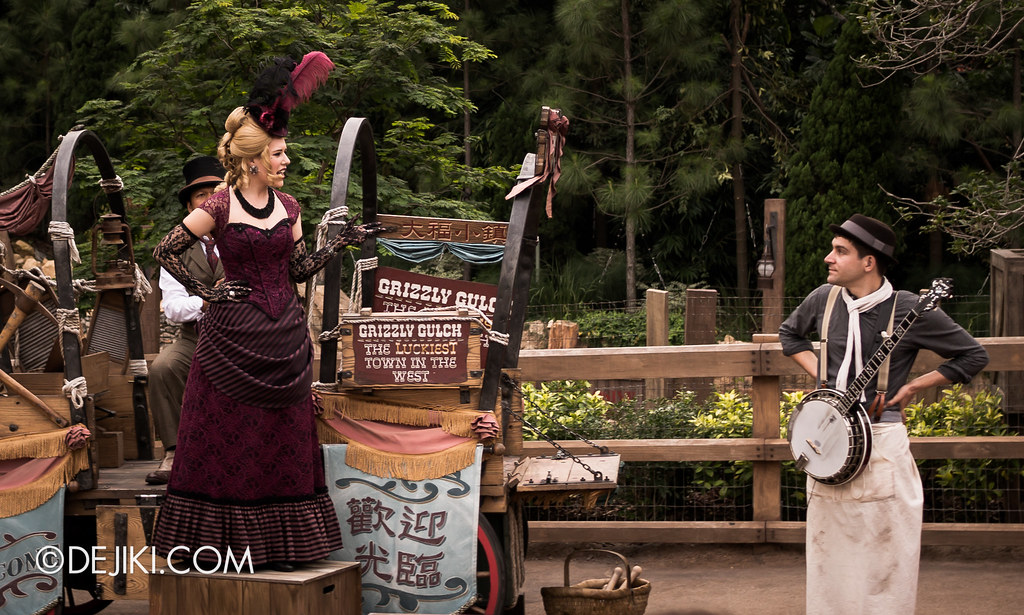 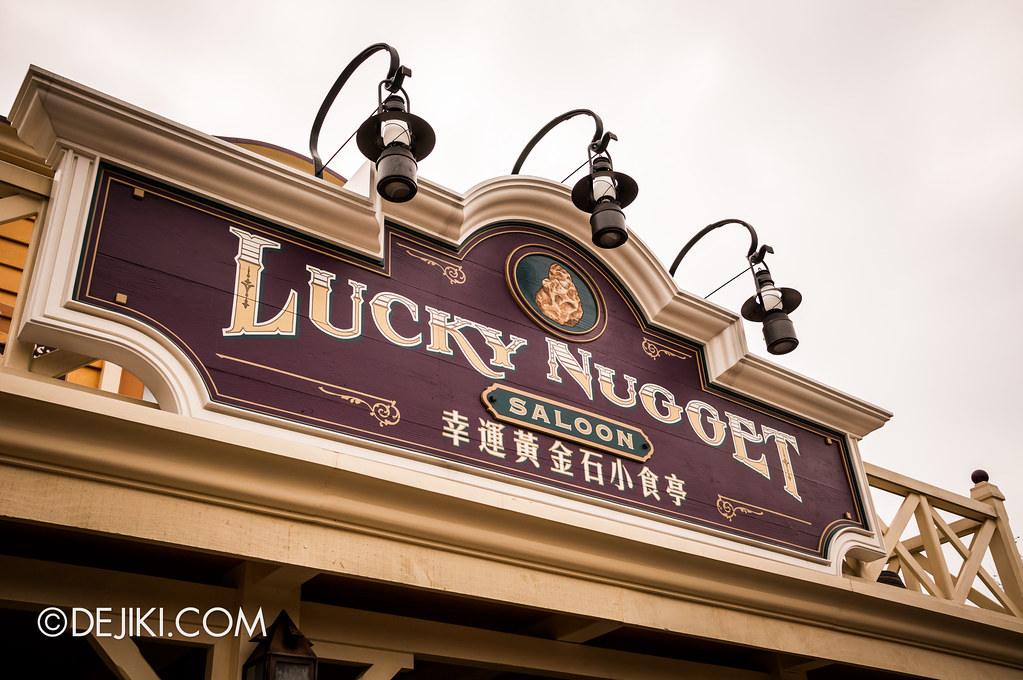 The Lucky Nugget Saloon is this area’s quick-service restaurant. There’s nice and quiet seating behind the saloon, which looks over the extended outdoor queue of Big Grizzly Mountain. 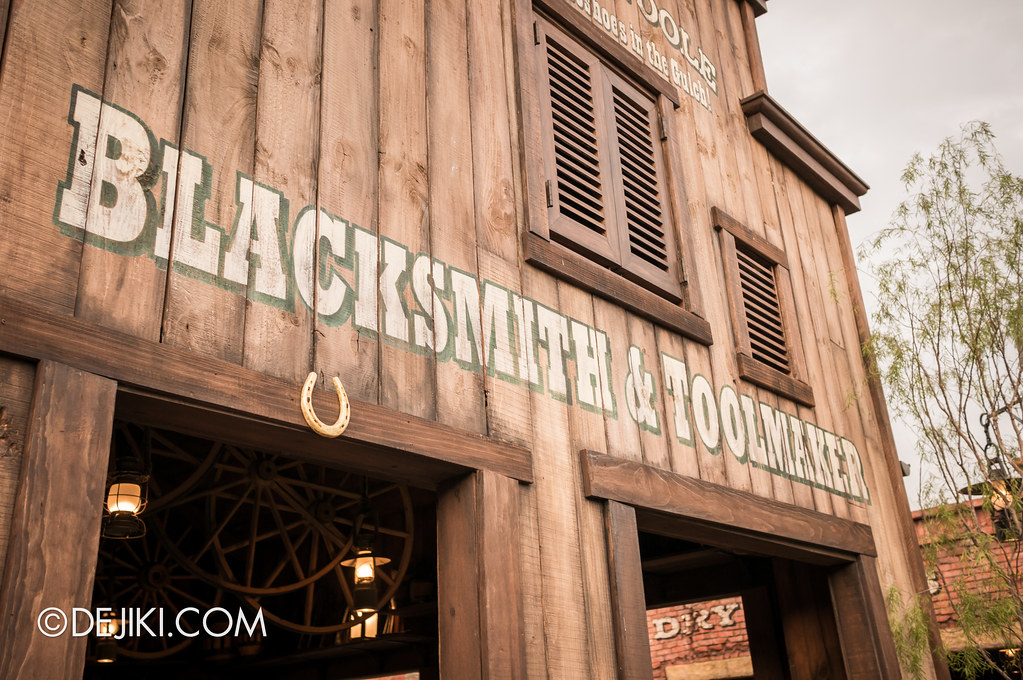 Just across the street are a few buildings that form the Geyser Gulch water playzone of Grizzly Gulch. 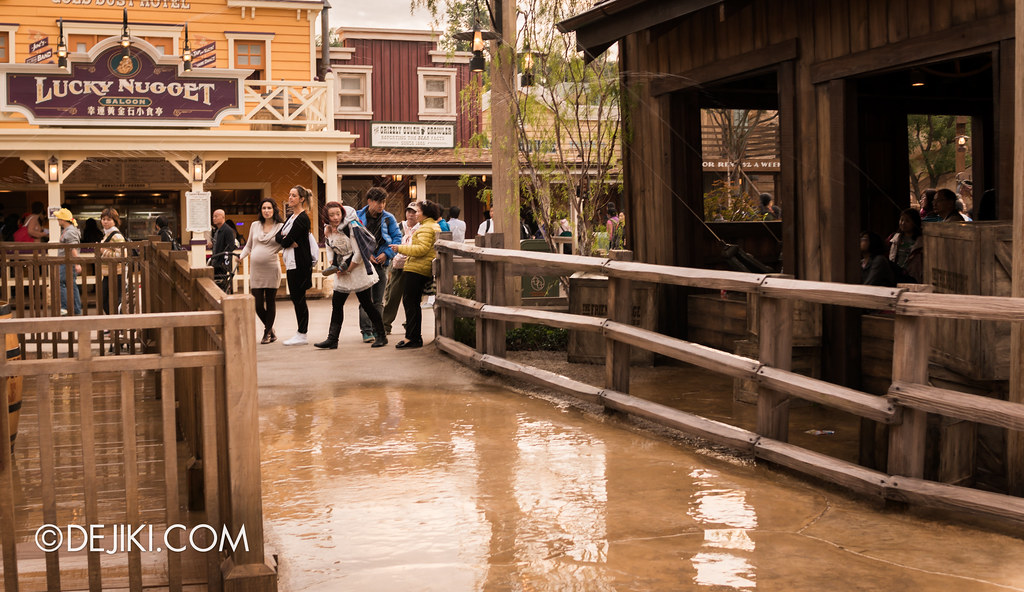 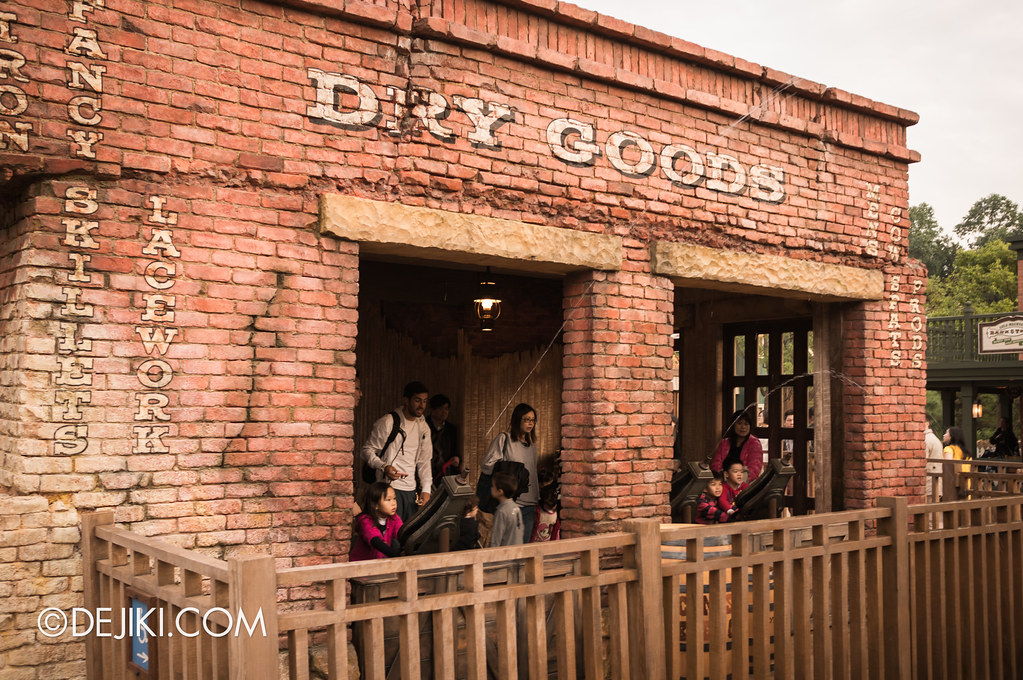 It’s free to play, and if you wish to spray someone with the water cannons, wait in line. Lots of excited (and rowdy) children here! 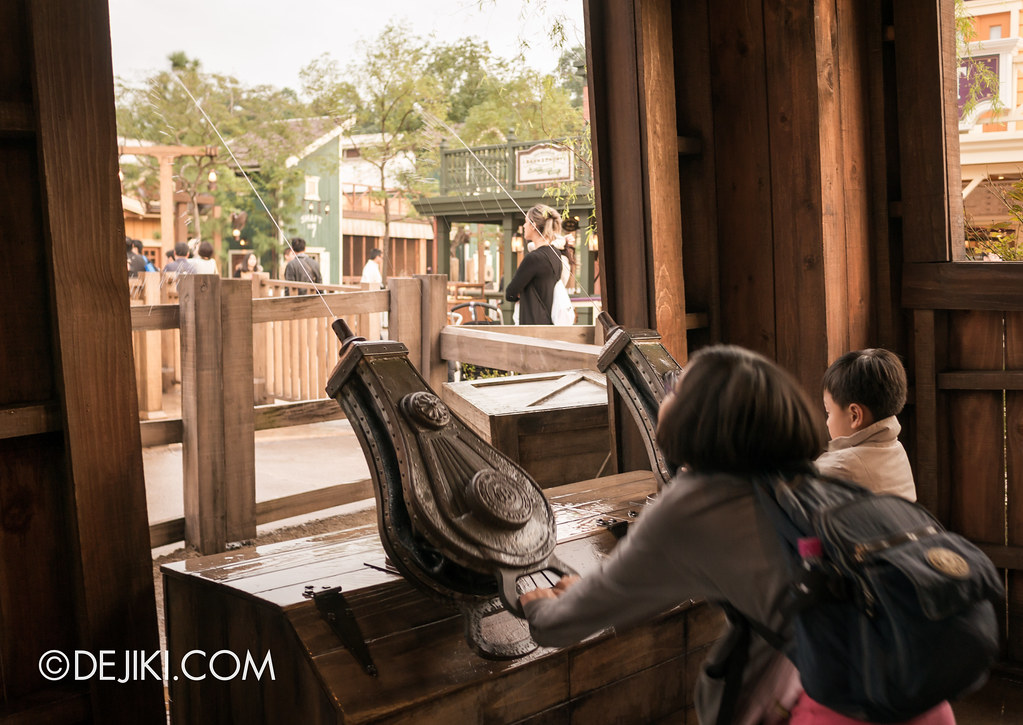 The story here is that pioneers that came to this land were not aware that Grizzly Gulch is filled with natural springs. They were surprised when the town was built here (or as they tried to built). Hence this area is filled with geysers and fountains – they even left some for the runaway mine cars! 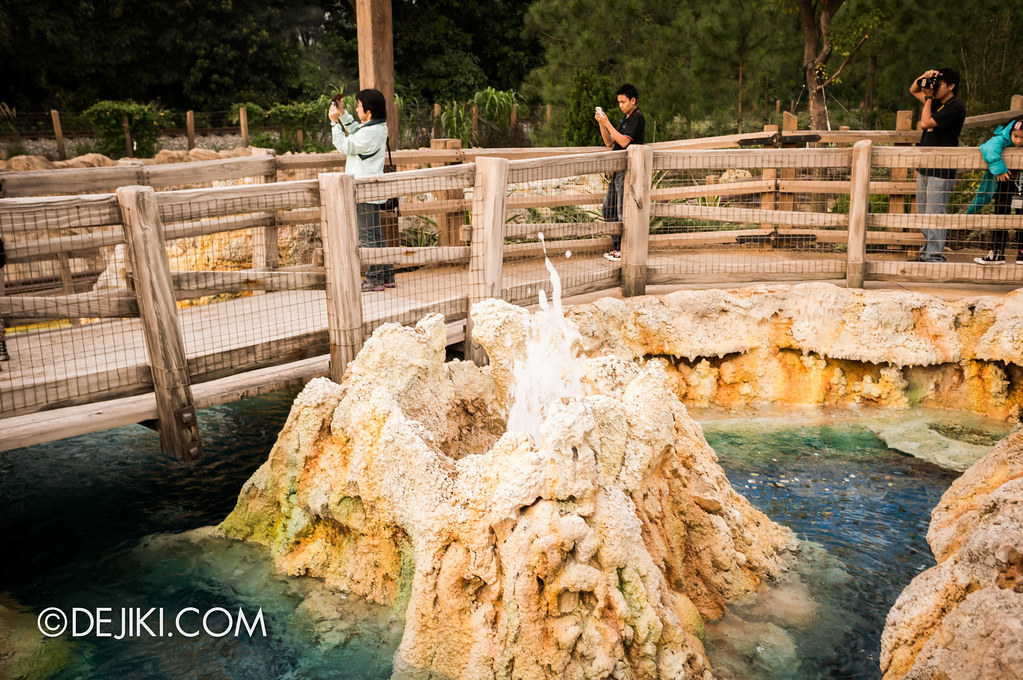 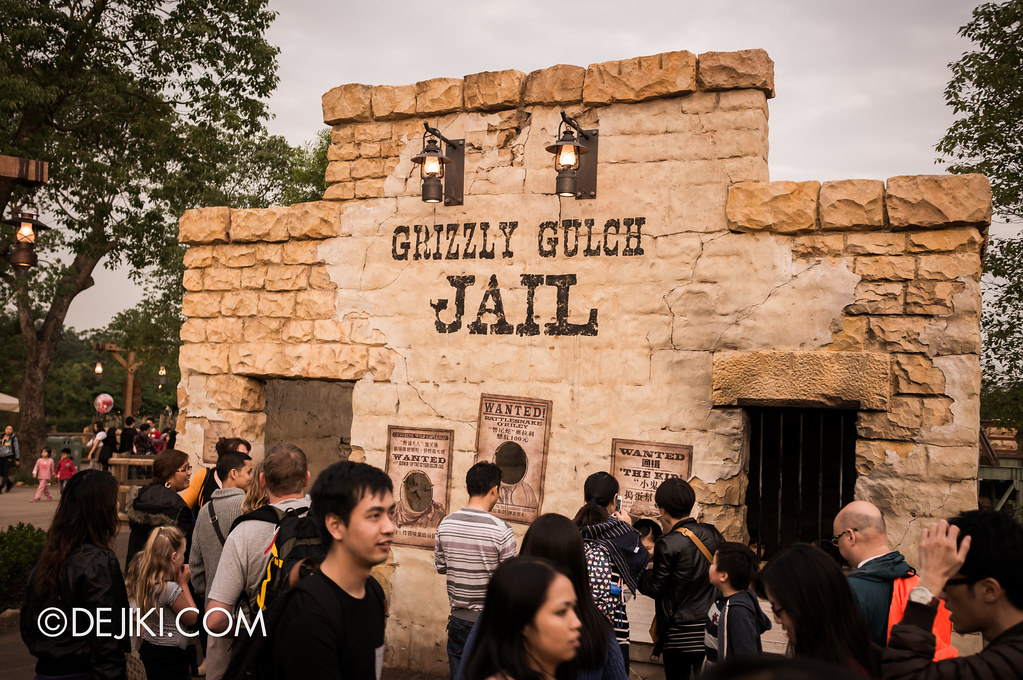 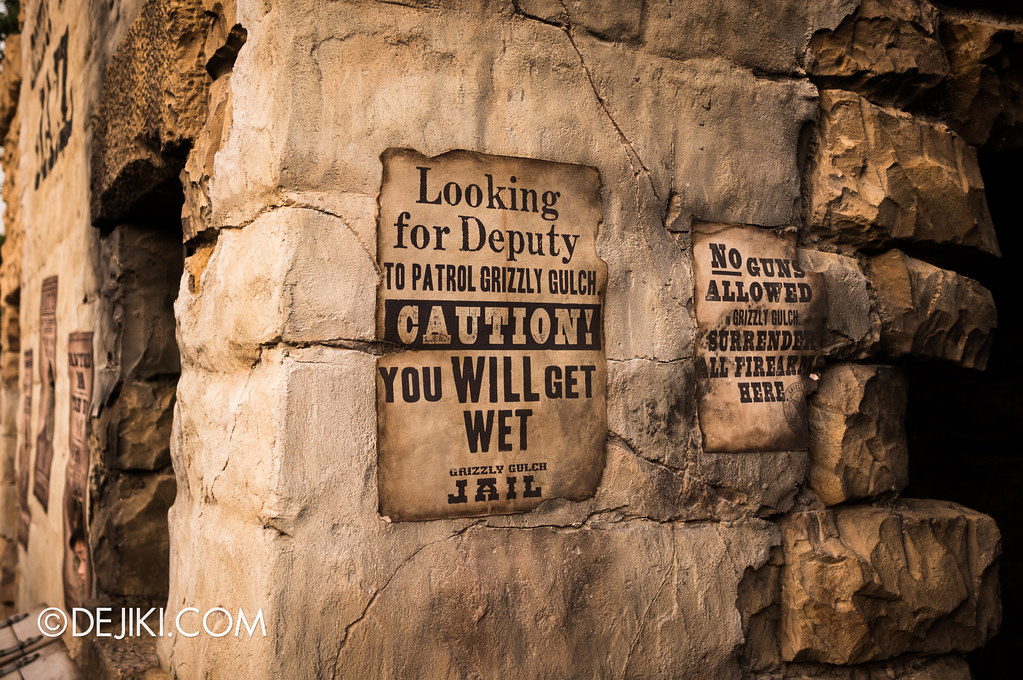 The entire area is beautifully sculpted, and photo spots are aplenty. The Jail is one of the most popular (followed by the “real” Lucky Nugget, you’ll see it later). 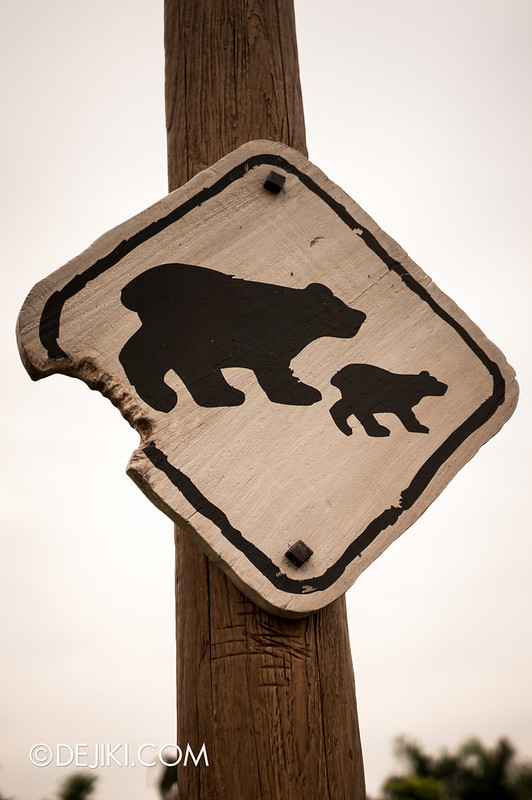 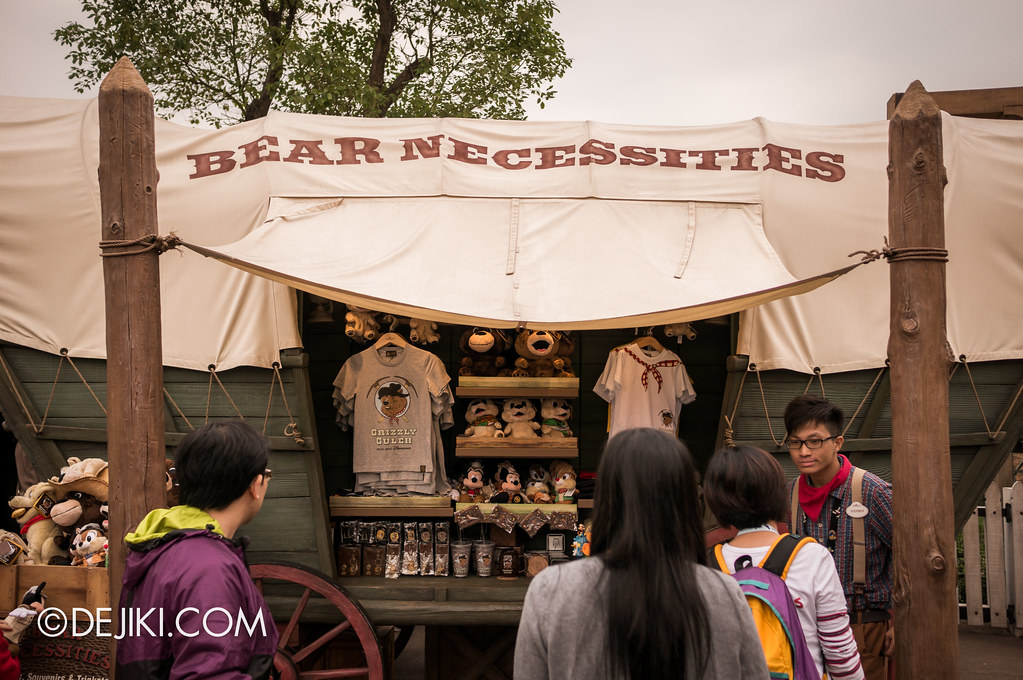 Despite being a “town”, there isn’t a store (for park guests) in this area. However, a little cart can be found near the entrance and exit to the Big Grizzly Mountain ride, aptly named Bear Necessities. 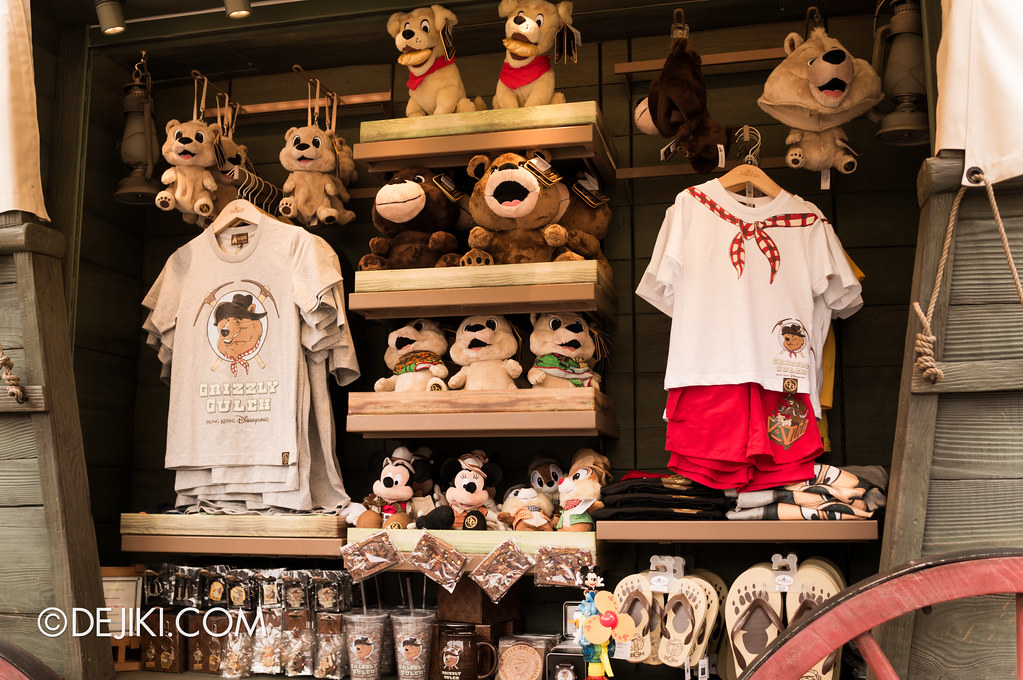 Lots of cute stuff here, and in my opinion, very nice items based on entirely new characters. I even bought the Nugget (baby bear) plush toy. 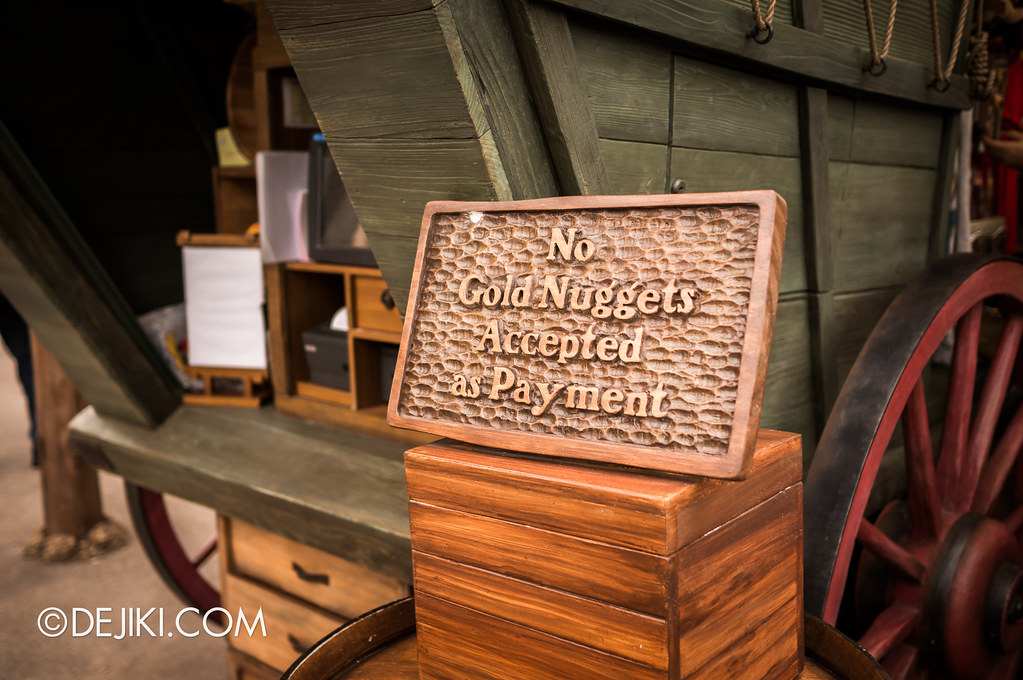 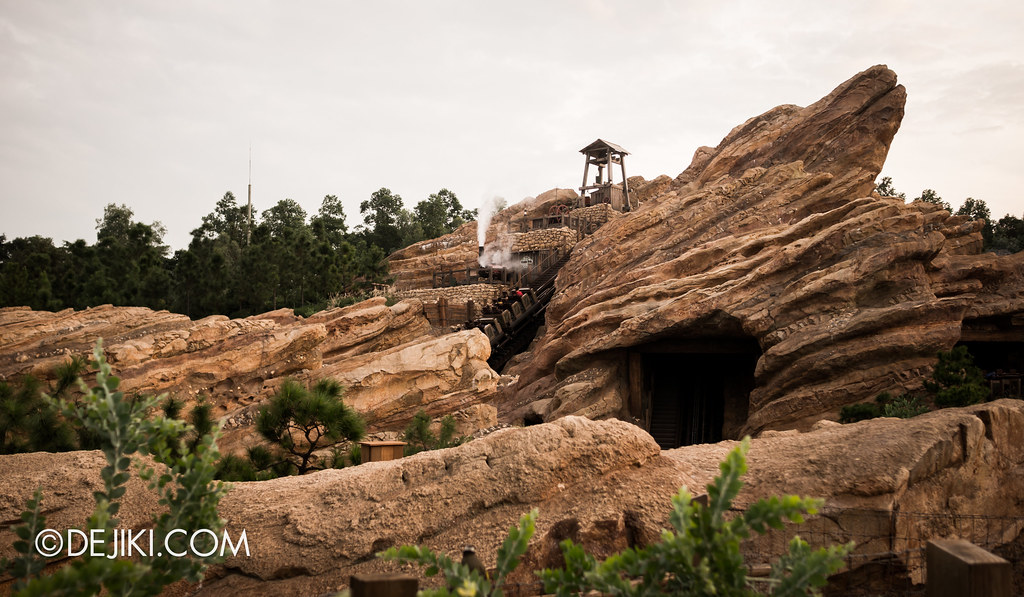 And here it is: Big Grizzly Mountain. 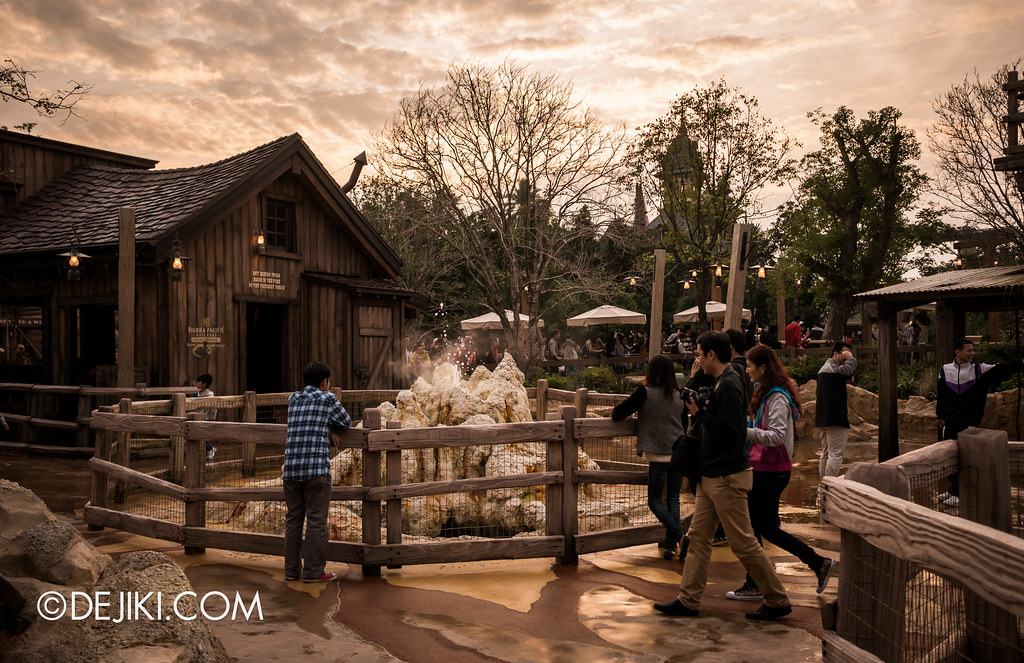 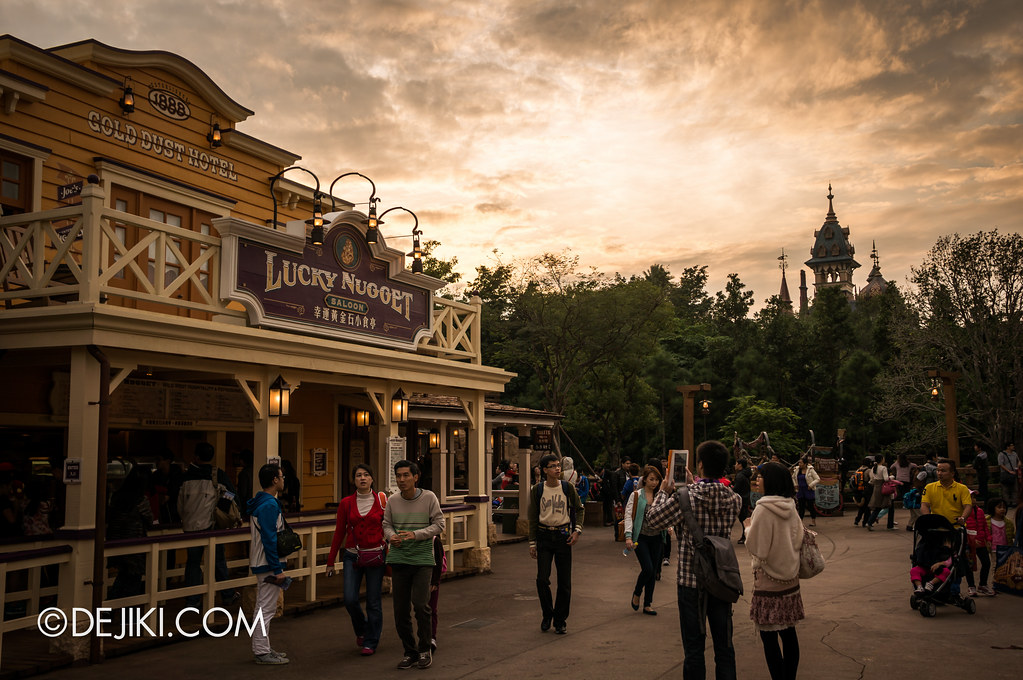 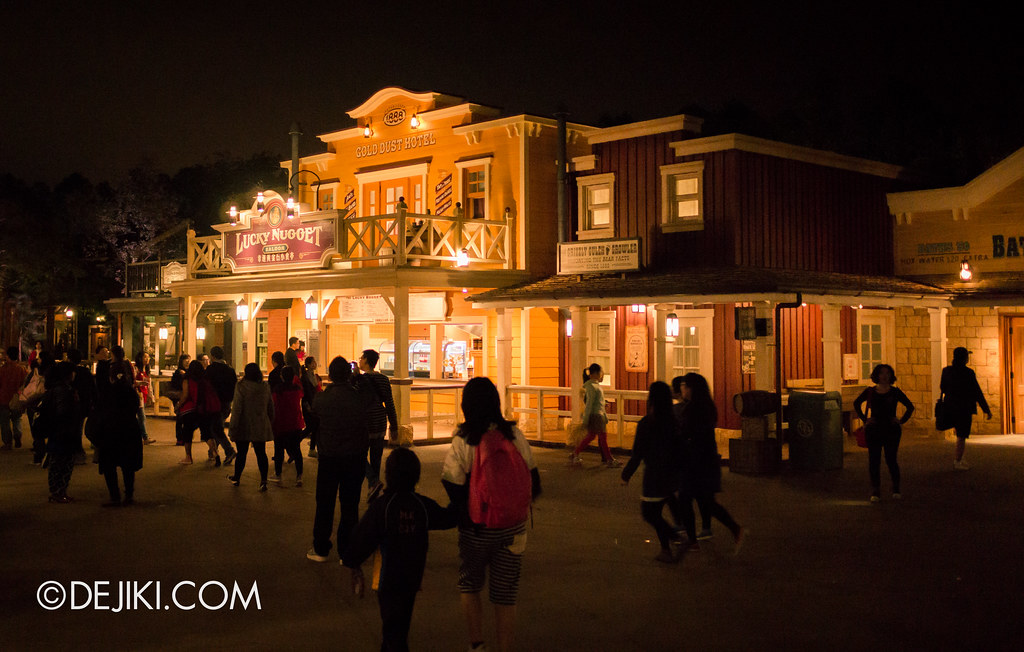 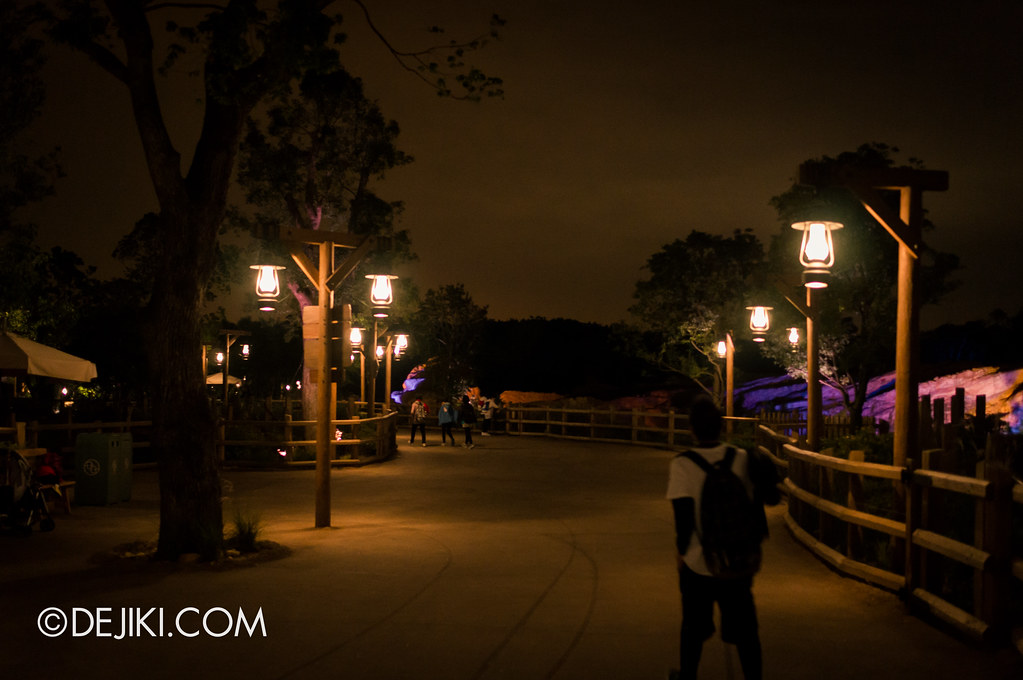 At night, the streets of Grizzly Gulch are pretty dim, especially the road overlooking the mountain. Only the town area is brightly lit. 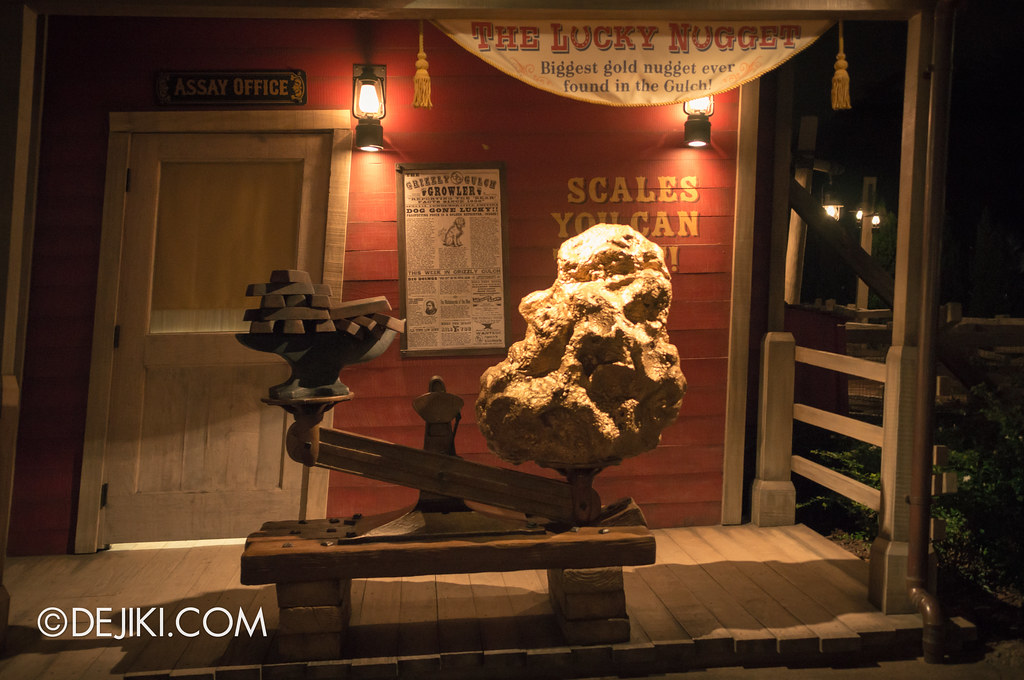 And here it is, the lucky nugget.