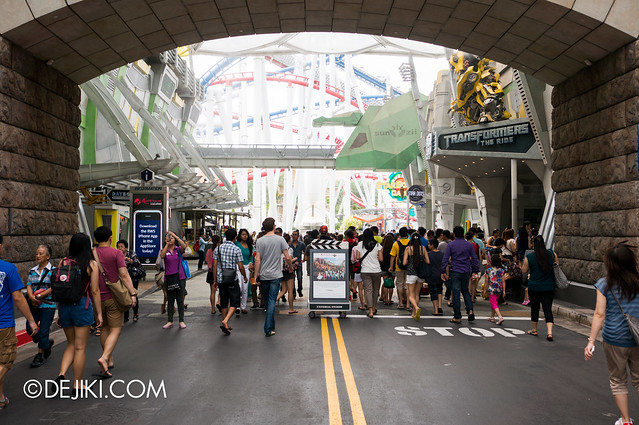 Highlights in this May 2013 Universal Studios Singapore Park Update 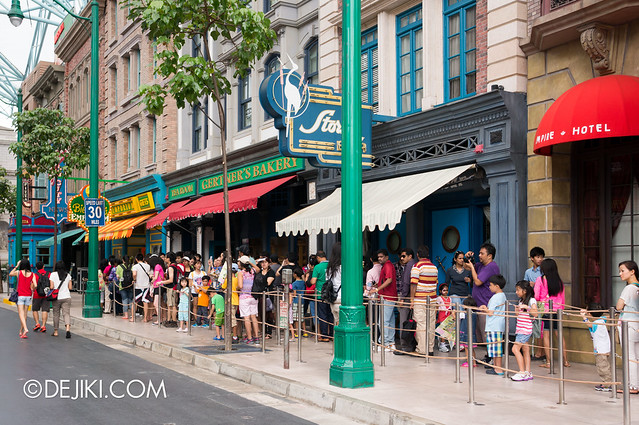 Expect to wait at the exterior line at Sesame Street Spaghetti Space Chase, with wait-times between 20-50 minutes during peak days. 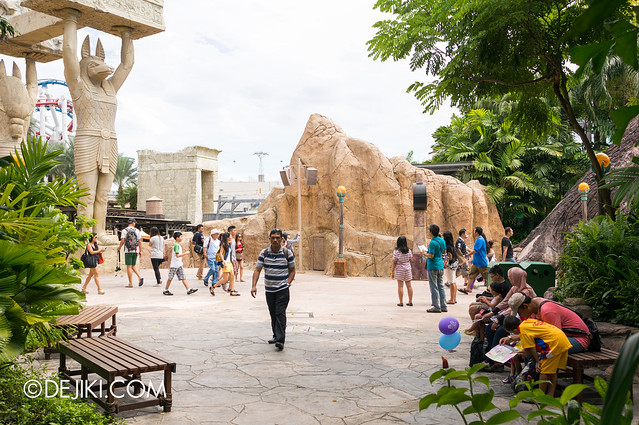 A few months ago, the Popcorn-a-saurus stall moved to the other end of Jurassic Park (nearer to Far Far Away). Now this is a nice rest area that looks into Ancient Egypt. It is also handy shortcut to Jurassic Park Rapids Adventure. 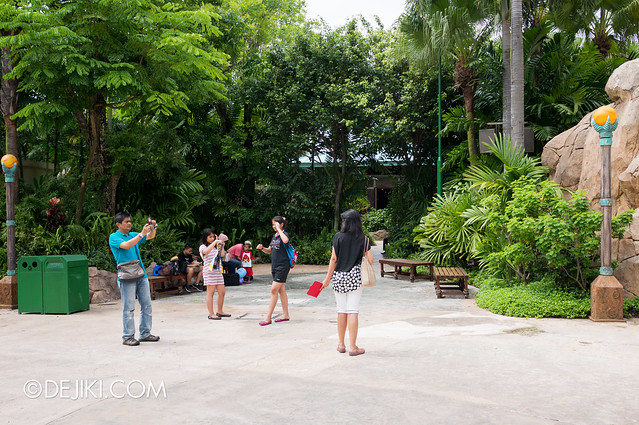 Just walk in and turn left. It’s quicker than going through the main gate if you are walking from Ancient Egypt. 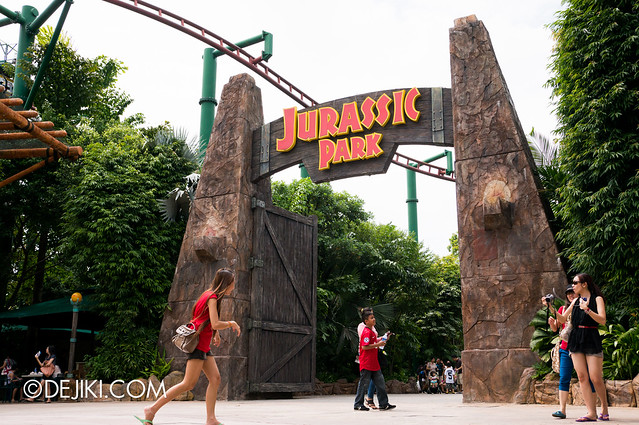 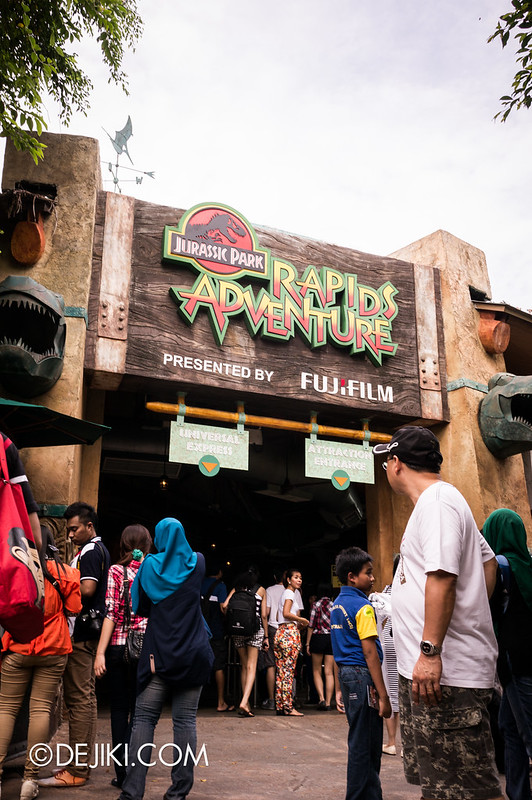 Nothing new to report at Jurassic Park Rapids Adventure, except that the efficient loading/unloading procedures often mean that small miscellaneous items (park maps, water bottles, hats) get left behind for the next group.

The park may think otherwise, but I feel that this ride is long overdue for another refurbishment or enhancement works. A lot of effects were not working or not operating as effective as before. 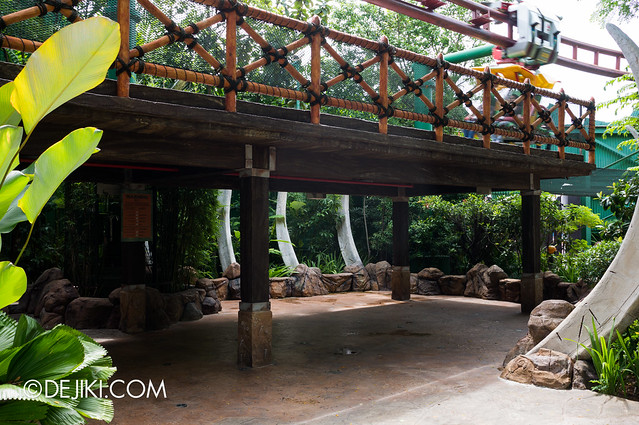 The small sheltered queue section of Canopy Flyer has been emptied. Mysterious. 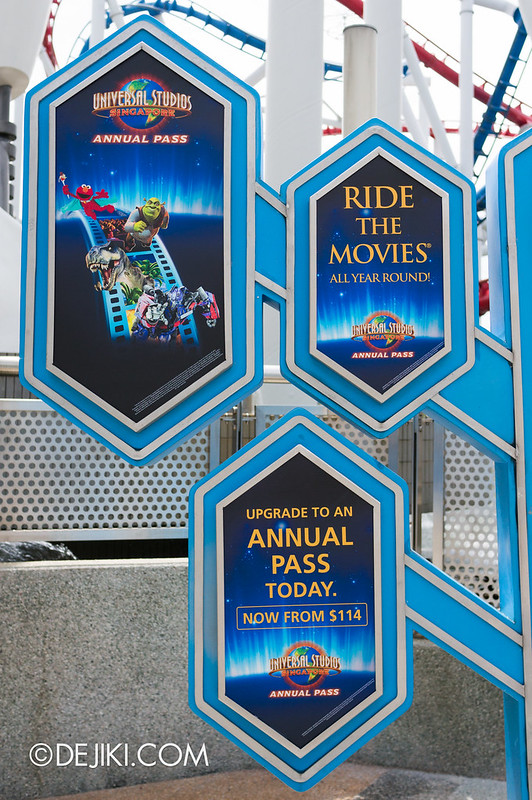 The cool annual pass signage, that is themed to Sci-Fi City, has been replaced with the updated branding – looking rather generic. 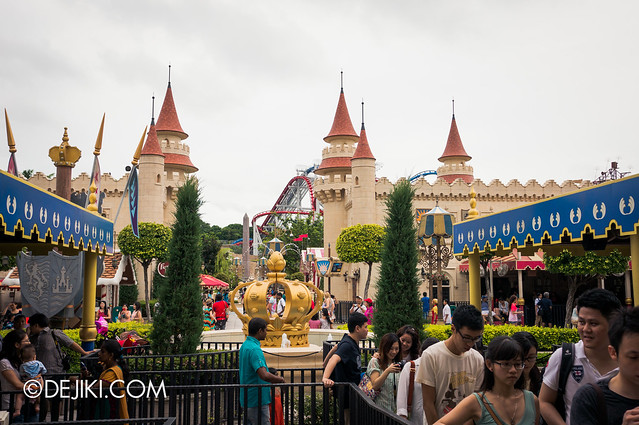 View of Far Far Away (and other areas of the park) from the Far Far Away Castle (Shrek 4D queue/show building).

I watched Shrek 4D (needed a place to dry off after Jurassic Park Rapids Adventure) and am quite surprised that: The pre-show is still a torture, and that there are too many malfunctioning (read: completely non-moving) seats in the main theatre. 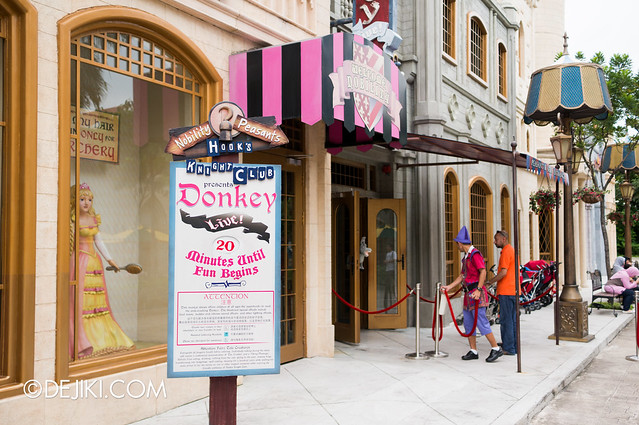 There are actually people at Donkey Live! 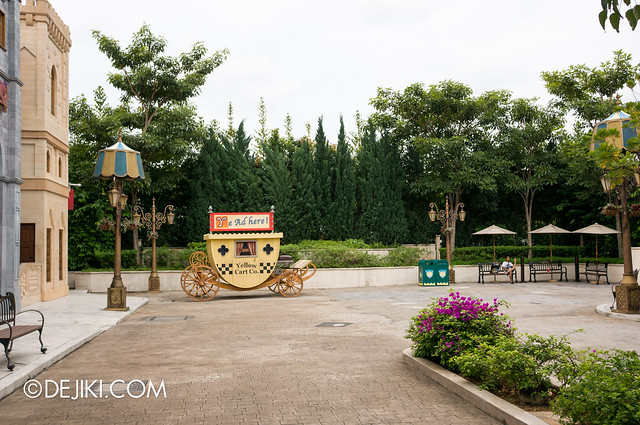 The park’s new attraction, due to open in Late 2014 ~ Mid 2015 will be built around here. Well, I’m hoping that this area leads to Universal Studios Singapore’s Wizarding World of Harry Potter.

UPDATE: I’ve received a number of requests and questions about this, so here is my response:

NOTE: Resorts World Sentosa and Universal Parks and Resorts have no plans to bring Wizarding World of Harry Potter to Singapore. Despite the mainstream and lasting popularity of the Harry Potter franchise, RWS does not appear to be interested in any major expansion – especially with the large investment involved (purchase of land area outside of the Sentosa IR lot would be necessary, as well as the necessary licensing). It is a shame, because all other Universal Studios theme parks will have a Wizarding World zone and a lot of people have been asking for this to be built in Singapore! If you wish to see this happen, have your opinions heard at the park’s Guest Services offices or write to RWS and UPR. 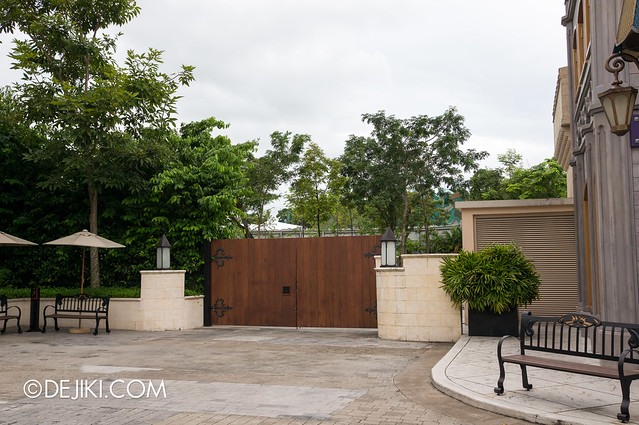 Realistically, it is likely to be a Shrek (or another Dreamworks franchise) attraction.
But who knows?

Like the Annual Pass, the Student Season Pass is valid for unlimited admission to Universal Studios Singapore during normal park hours (excluding private and special events such as Halloween Horror Nights). The Student Season Pass is valid from now till 30 November 2013. The passes must be purchased before 30 June 2013 (last day of this promotional price). Valid student pass (or relevant credentials) must be shown to the ticketing crew to qualify. The “RWS Attractions Pass” plastic card will be provided to season passholders.

Obviously, this is a no-brainer option for all students in Singapore – it is a small top-up from a single day pass!

Scare-actor audition dates for Halloween Horror Nights 3 (HHN3) have been announced along with the event dates. HHN3 will run for 10 nights over four weekends. This is a modest increase from the seven days in 2012.

Event programme, opening hours, ticket options and pricing will be available in months to come, when HHN3 is officially announced by the park. And if you are auditioning to be a scare actor – Best of luck! Feel free to refer to my posts on past Halloween Horror Nights for reference and inspiration. 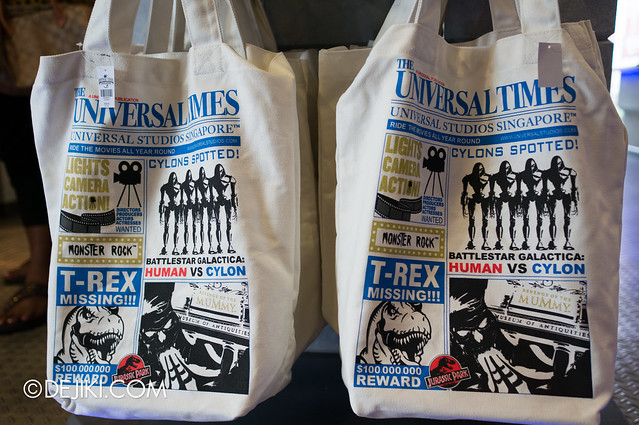 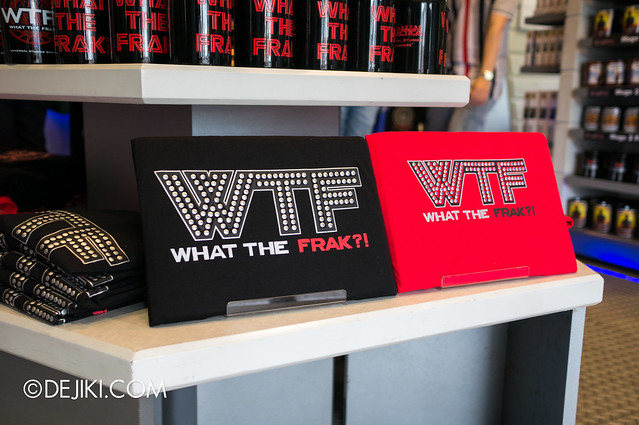 If you love the “WTF” / “What The Frak” T-shirts from Battlestar Galactica, you’ll be pleased to see these new designs, now even available in couple wear: 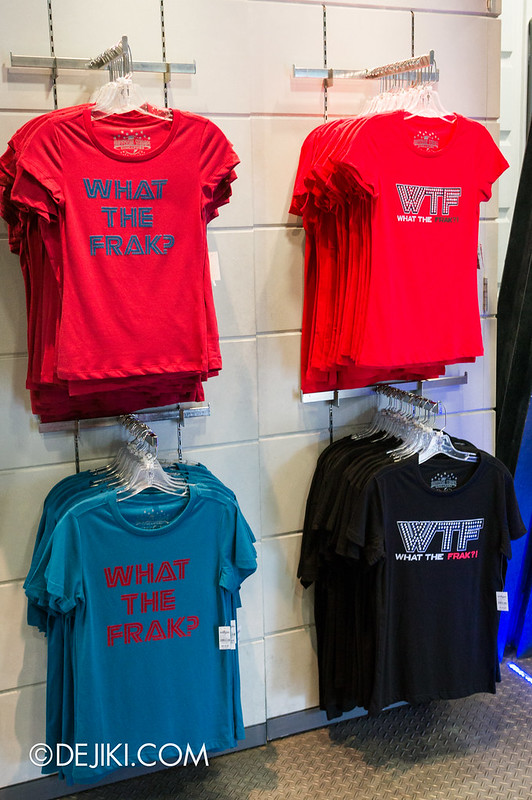 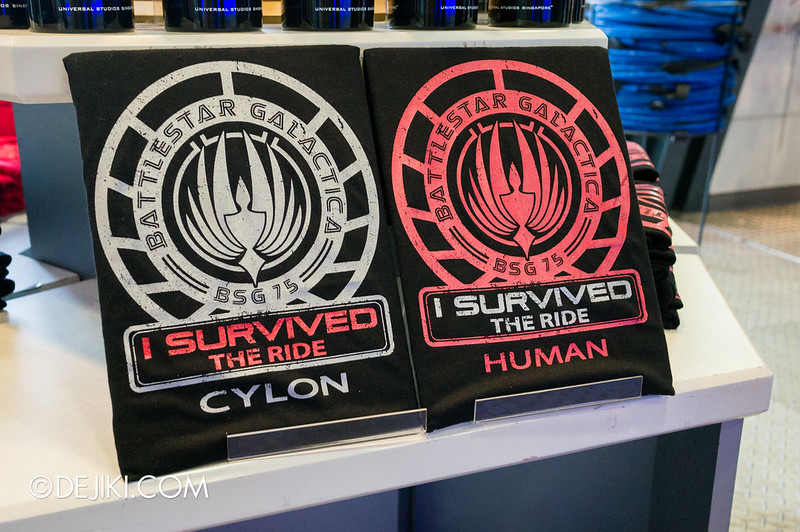 Over at Transformers Supply Vault (Sci-Fi City, beside Transformers: The Ride), the “Limited Edition Transformers Optimus Prime Trailer” is finally on a discounted price of S$149.90. It also comes with 2 free gifts. This is (supposedly still) a Universal Studios Singapore exclusive item. 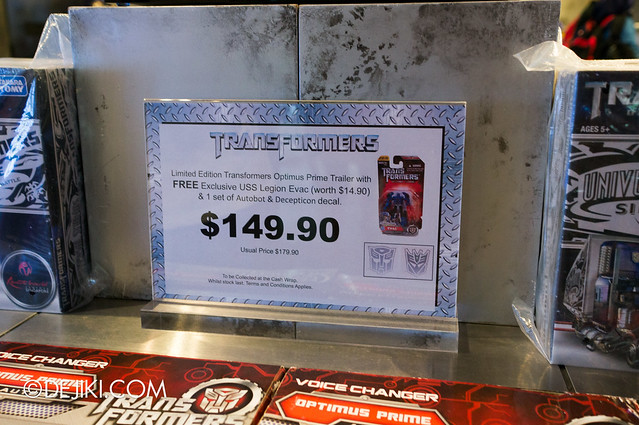 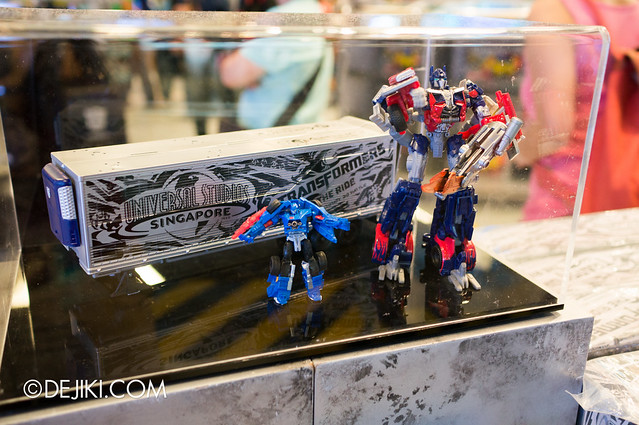 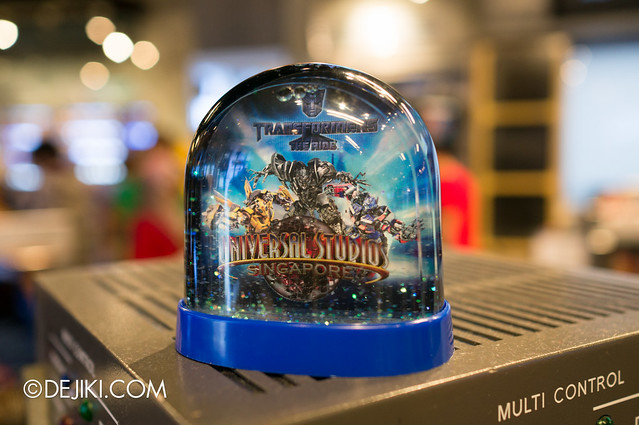 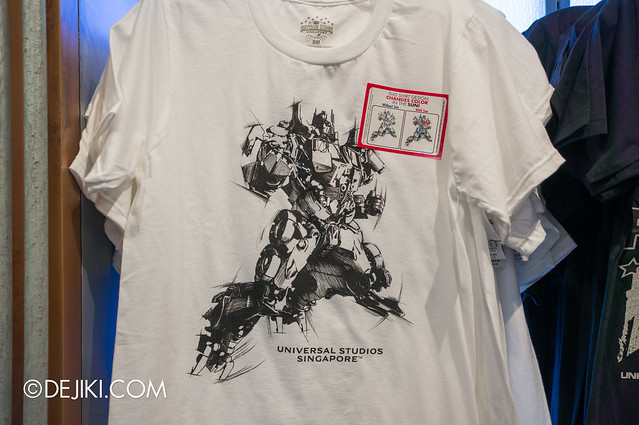 The design on these “Sun Activated” T-shirts transform into colour when exposed to the sun (and possibly anywhere with UV). 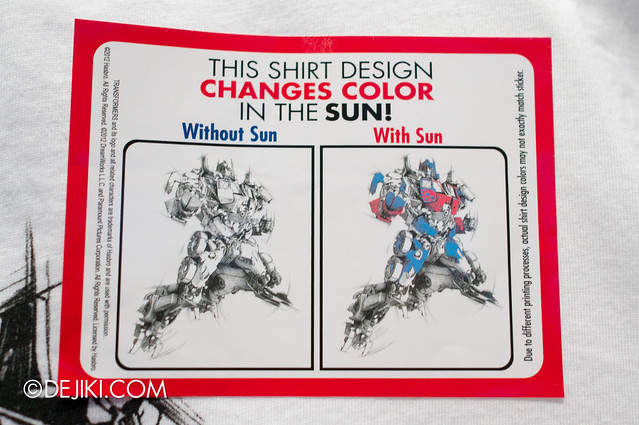 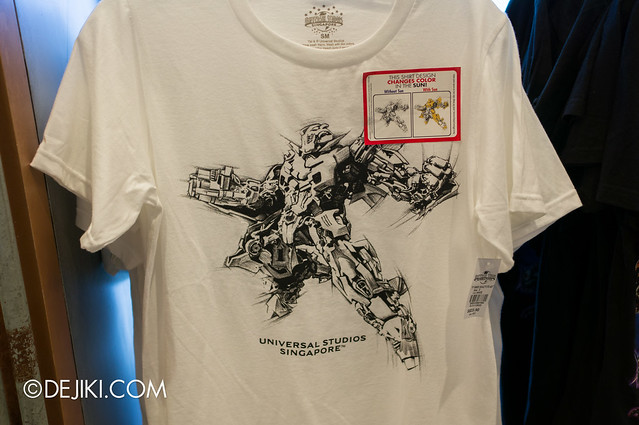 There’s also a Bumblebee design. Both designs available in adult sizes, for S$33.90 each. 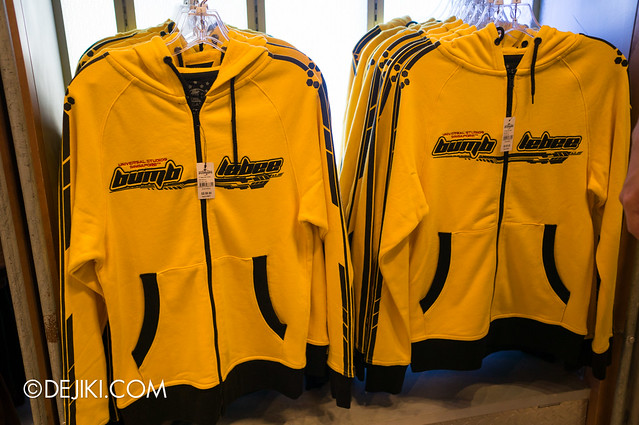 The Bumblebee Hoodie is also spotted at the Transformers Supply Vault for S$89.90. 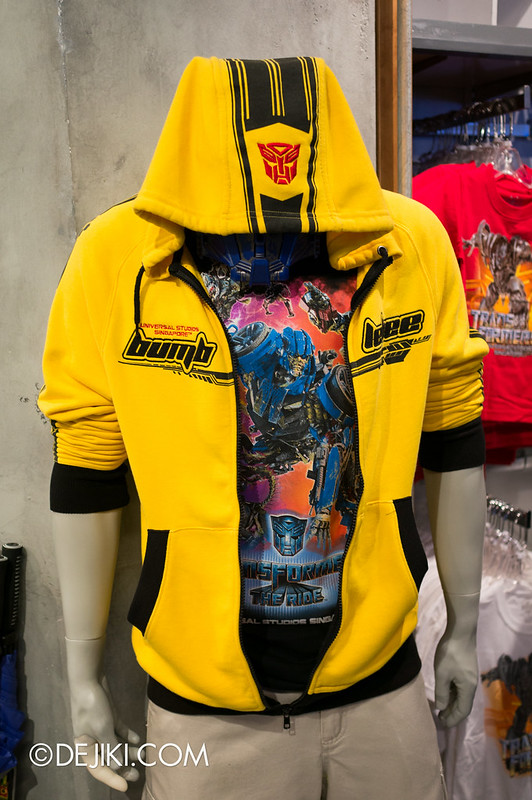 I thought I saw kids running around with Thai Coconut Ice Cream (you know, those that are served in coconut shells, with slices of coconut). They are actually fruit sorbets that turned up at the park sometime ago: 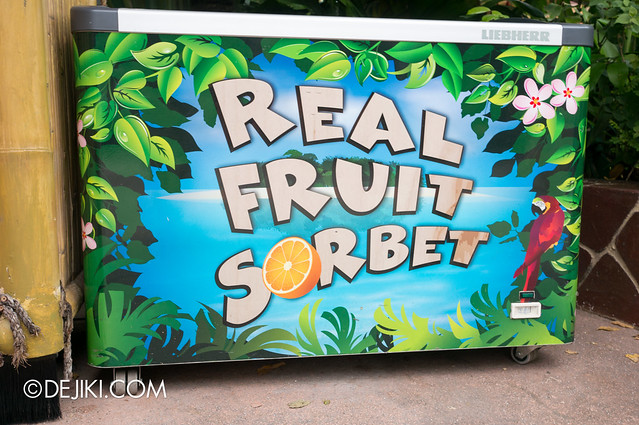 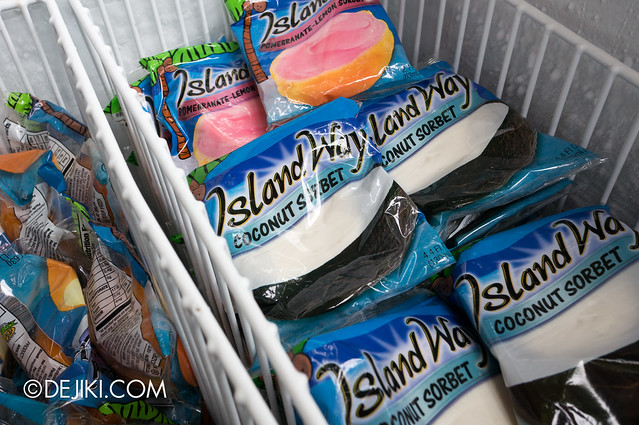 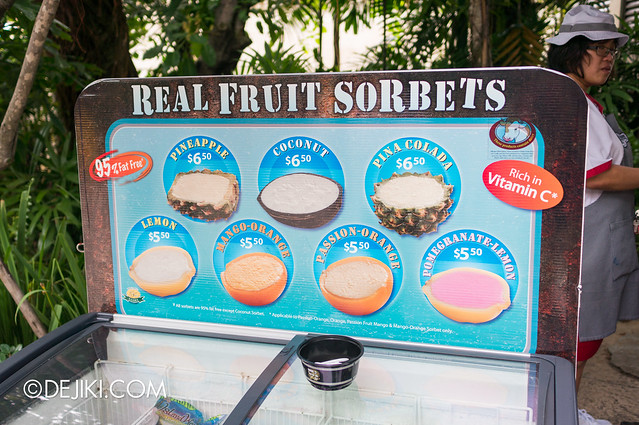 These fruit sorbets are available at some outdoor snack stalls around the park.

And that’s a wrap! Check back in a while – I’ll be posting a special feature with photographs from all over a specific zone in the park. Have a guess!