By Dejiki on November 10, 2012 in Attractions, Theme Parks 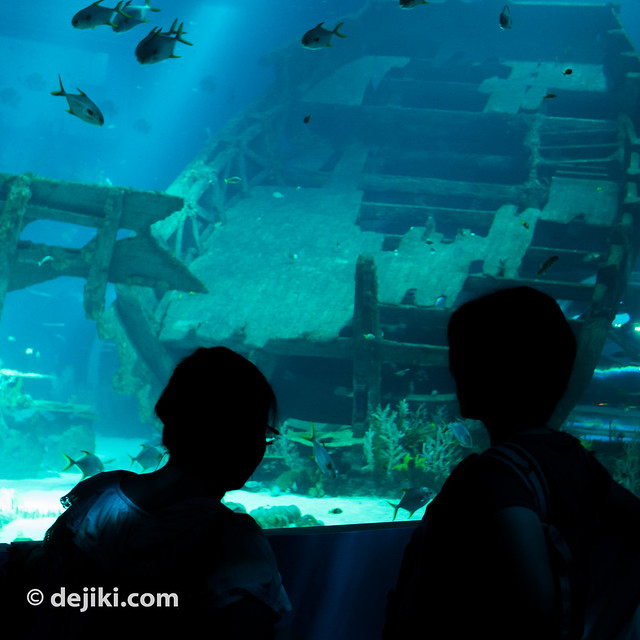 I’ve provided a lot of aerial photography updates on Marine Life Park, with my Marine Life Park – from the air series. As only the Adventure Cove Waterpark is built above ground, there isn’t much coverage on the S.E.A Aquarium. However, there were interesting changes recently. Here’s a sneak peek at S.E.A Aquarium, the world’s largest oceaniarium.

S.E.A. Aquarium (Southeast Asia Aquarium) is home to over 800 species of marine animals. It promises the world’s largest window to the ocean and is also the world’s largest aquarium. Exhibits at S.E.A. Aquarium will bring guests on a discovery tour of marine life and environments, from Southeast Asia to African subcontinent, possibly more. There will be a mix of different viewing windows, from the usual glass walls, to a mega glass wall, aquarium tunnels and overhead viewing panels, as well as some smaller open tanks with interactive exhibits.

In this entry, we’ll look at:

The entrance to S.E.A. Aquarium is actually at the Maritime Experiential Museum (MEM). What/where is MEM? Let me refresh your memory: 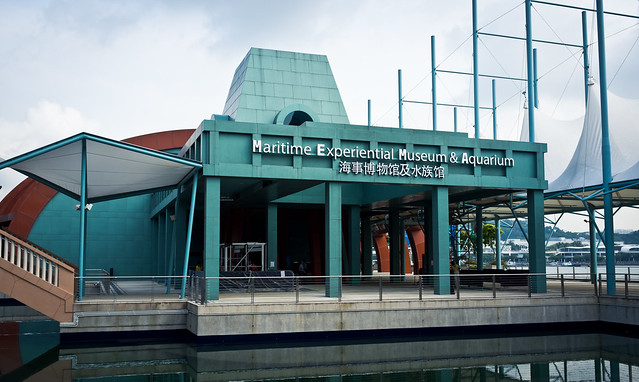 This is the Maritime Experiential Museum (First photo taken a year ago). It has also has a historic ship harbour (not pictured). Read more about MEM here (when it was MEMA). 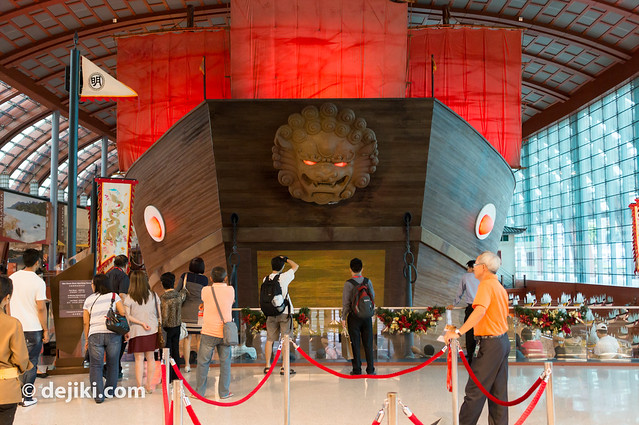 Anyway, there are already some changes done to MEM to accommodate S.E.A. Aquarium. 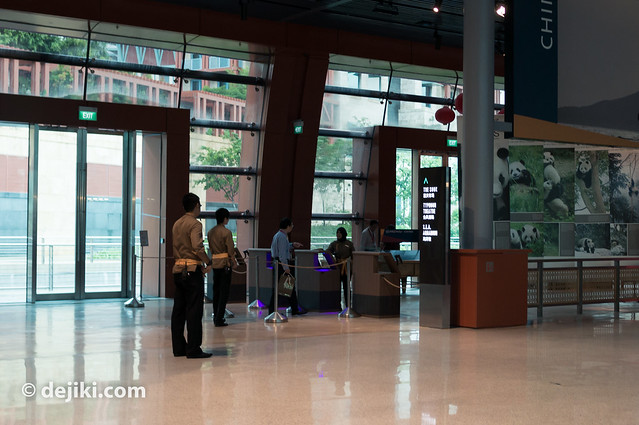 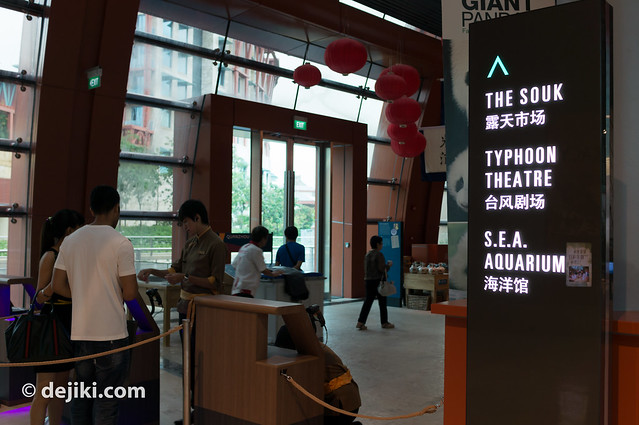 References to S.E.A. Aquarium can be found all over the Museum.

According to MEM staff, tickets to the Aquarium includes admission to the Museum. This is because you’ll need to walk through the upper level of MEM to get to the Aquarium. The entire The Souk and its exhibits, actually. 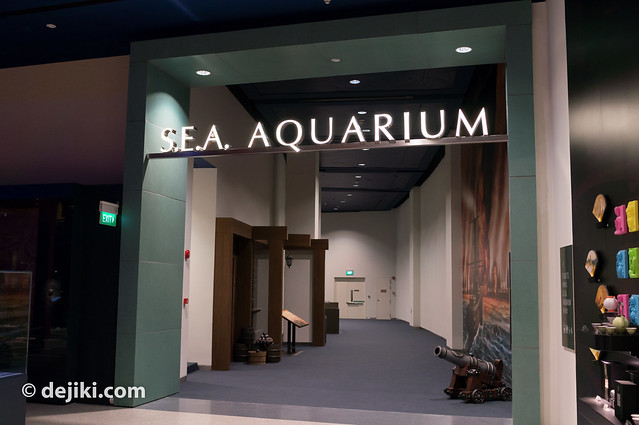 The entrance to is located near the Maritime Archaeology Gallery and Typhoon Theatre exit. 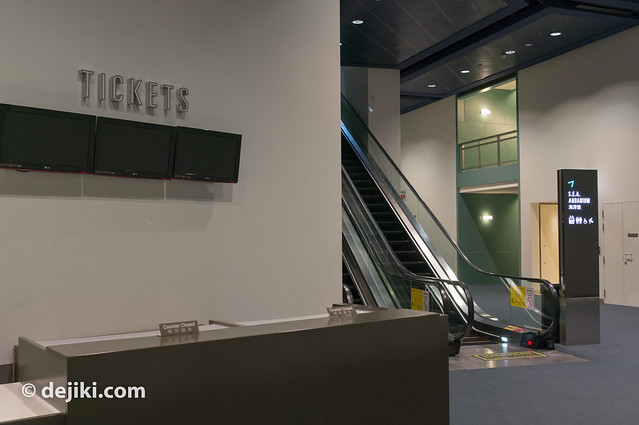 Ticketing counters are next to these escalators. Given how MEM is structured, these counters should be for MEM guests who then decide to visit the Aquarium. Most people would buy Aquarium tickets outside MEM. Anyway, you’ll need to take these escalators to transit between Souk gallery (Level 1) and the Basement level, especially if you skip Typhoon Theatre. 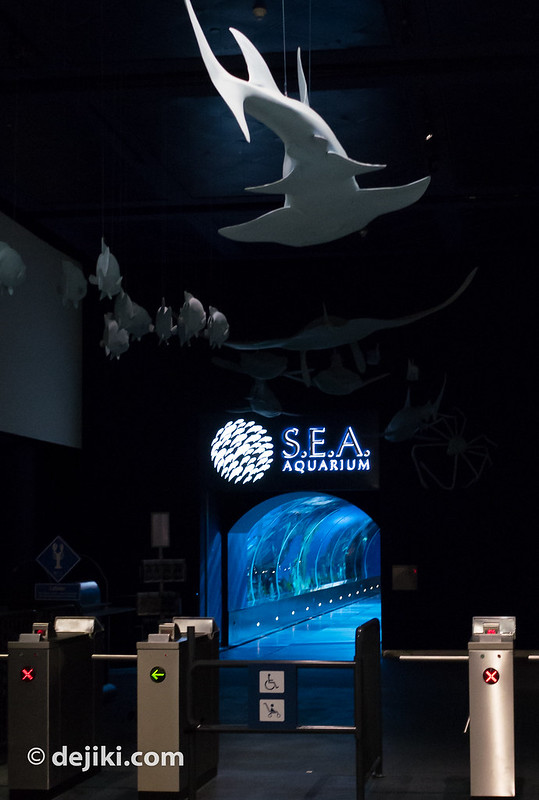 And here is the actual entrance, with turnstiles. It leads to one of the exhibits, called Strait of Karimata and Java Sea.
(This area is labelled as “Entrance to S.E.A. Aquarium from MEM” in the Aquarium Layout below). 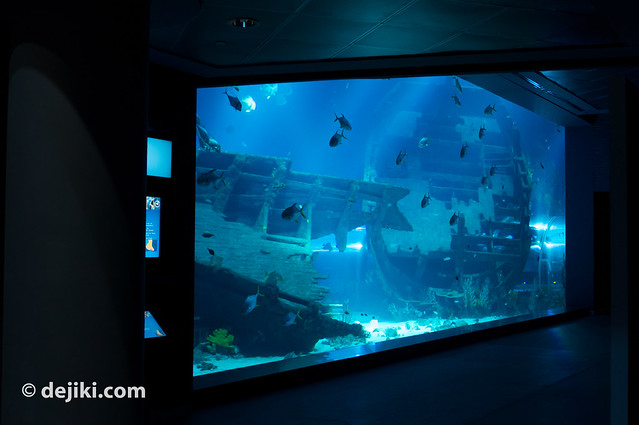 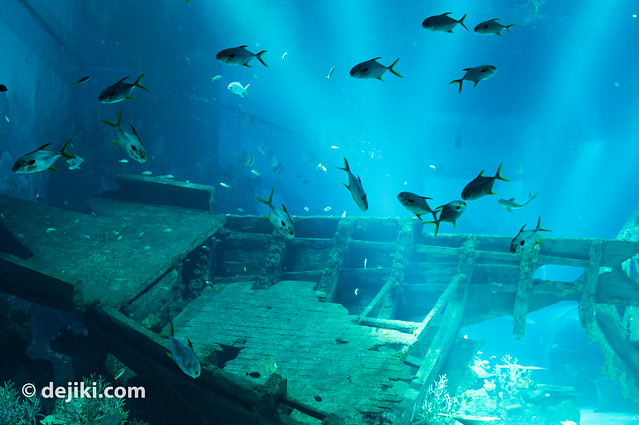 The Shipwreck Habitat exhibit is now open to all MEM guests. This exhibit shares the same tank as Strait of Karimata and Java Sea. 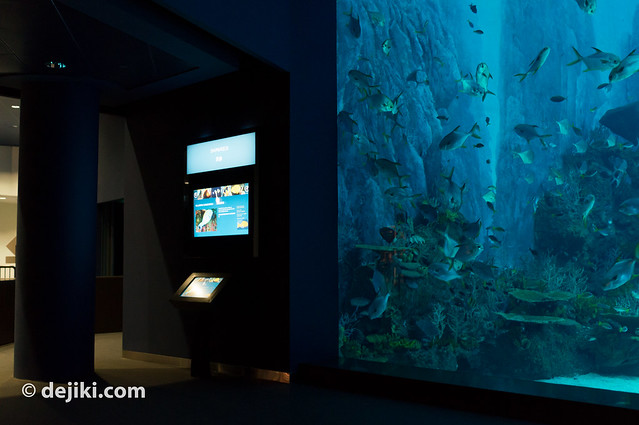 There will also be many interactive booths, such as the one on the left here. 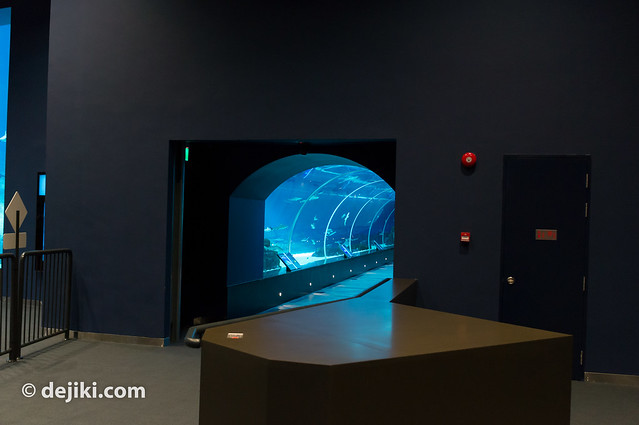 To the left of Shipwreck Habitat is the Shark Seas exhibit – which is a tunnel, and a large window. This area could also be one of the exits of the Aquarium (labelled “Exit to MEM” in the Aquarium Layout below).

But I spotted something even more wonderful: 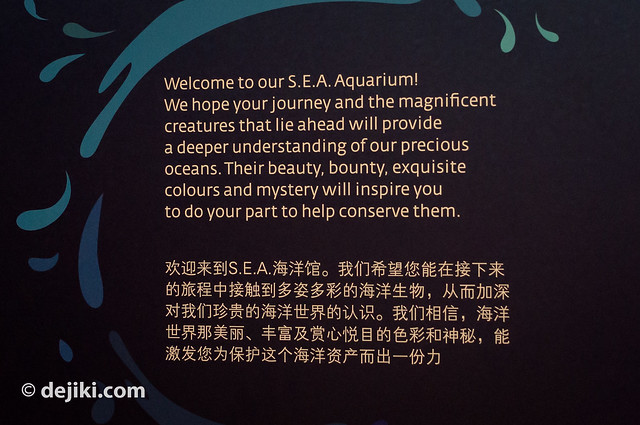 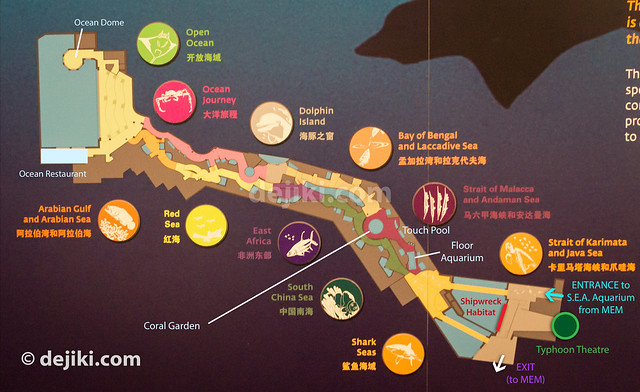 So here is the layout of S.E.A Aquarium, appended with more details.

If you look closely, the Aquarium appears to be designed with one very long, swiggly path, starting from the bottom left, going up to the biggest exhibit at the top right, then back down to the bottom left again. Essentially, S.E.A. Aquarium starts and ends with the two exhibits closest to MEM. The Open Ocean sits in the middle of this long walkthrough. Of course, guests should be able to deviate from the standard path if they wish.

There are 11 aquarium zones at S.E.A. Aquarium. Some zones are large tanks, while others made up of series of smaller tanks. This is just a layout of the exhibits and may not be representative of the entire Aquarium complex.

The Shipwreck Habitat tank is shared with Strait of Karimata and Java Sea. You can see parts of the tunnel if you look closely.

It seems that Open Ocean zone may have amphitheatre seating, or multi-level viewing areas. It’s a very large panel anyway. There’s also a small extension at the very top of this layout. It looks like a special viewing area (a dome, according to Zooish) for guests to view this massive aquarium and be engulfed in (almost) all directions – a nearly 360° surround experience of the Open Ocean Habitat. It’s not a true “surround” experience, sadly.

In case you’re wondering, the left edge of the Aquarium is linked with Marine Life Park’s Ocean Suites. According to Zooish, these exquisite in-park suites will have a window into the Open Ocean, for a memorable and unique experience. The Ocean Restaurant has viewing panels looking into the Open Ocean (refer to map!) There is also a cafe in the S.E.A. Aquarium.

Notice how Dolphin Island takes up a small space in the layout? I think it’s not really showing the full scale of all the exhibits (to keep the layout concise and clean). Going by the layout (and general placement what’s above ground…) maybe these are the viewing panels for Dolphin Island: 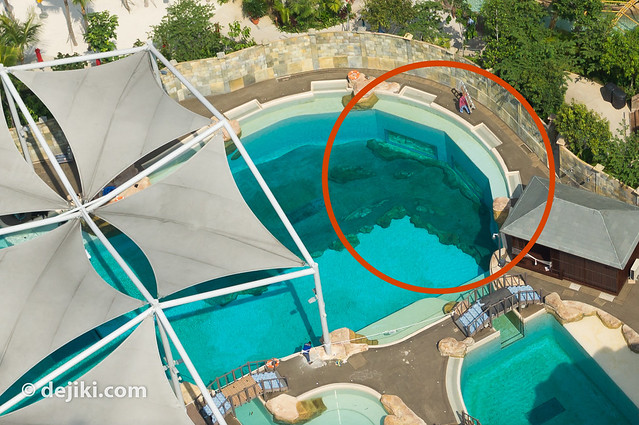 As more time is required to transfer the 25 bottlenose dolphins from Philippines, most likely the windows to Dolphin Island would be sealed up or something when Marine Life Park opens. 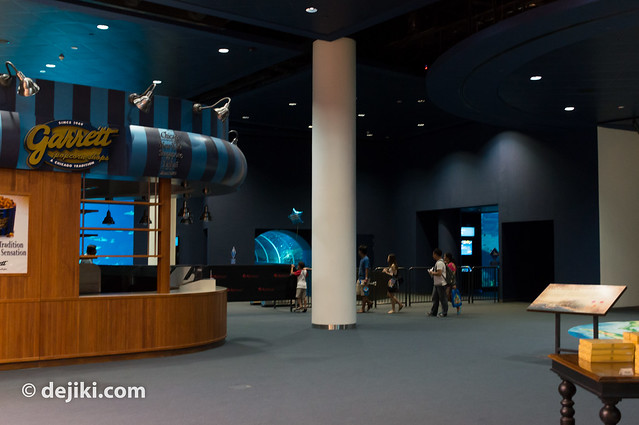 While we already know that the Aquarium is linked to MEM, this is where the two attractions are joined. It looks rather seamless, with the Shipwreck and Shark Seas exhibits viewable from MEM. This location is labelled as “Exit to MEM” on the Aquarium layout above. 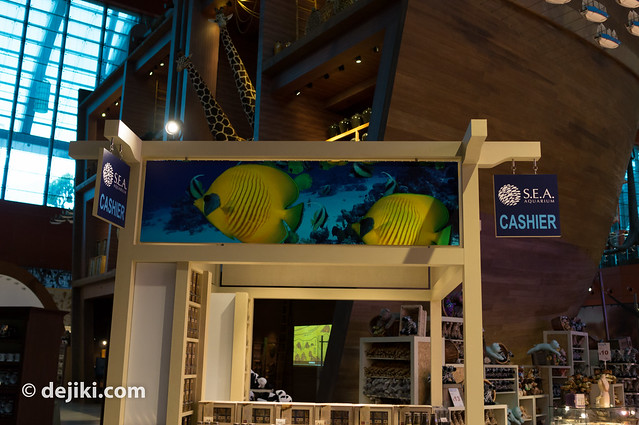 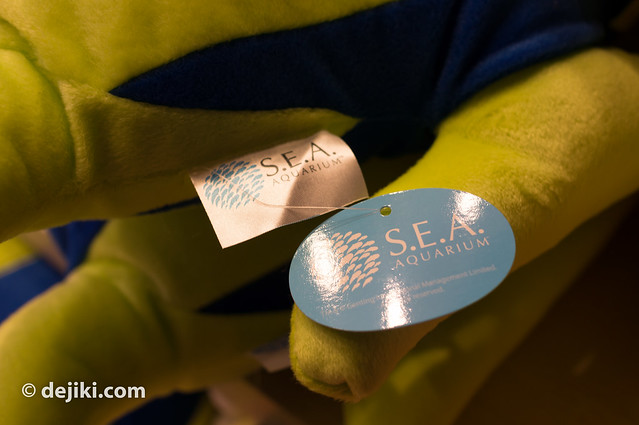 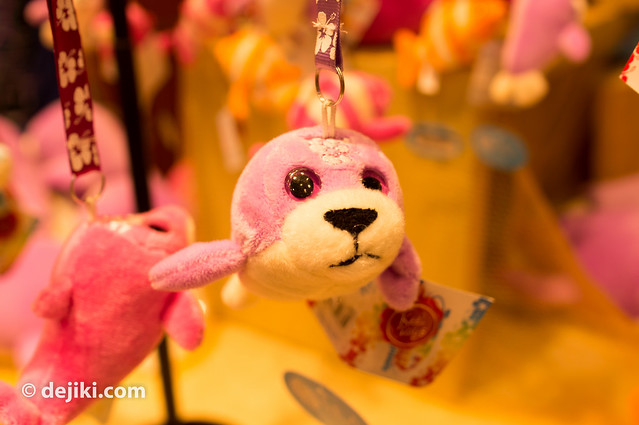 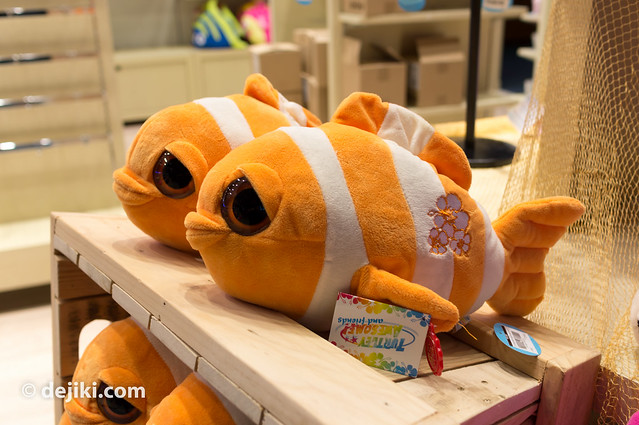 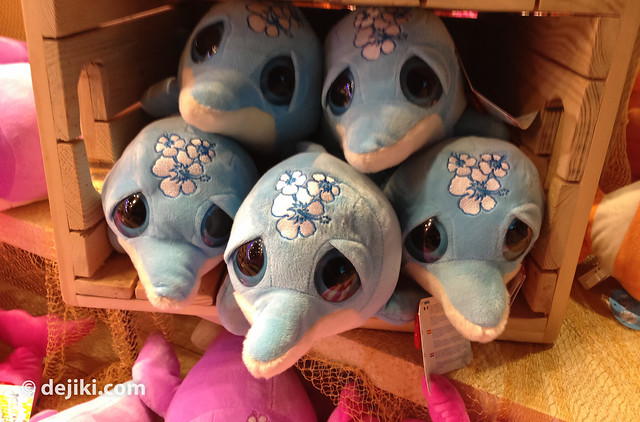 These dolphin plush toys – I find these toys rather amusing because these “sad dolphins” are souvenirs available at S.E.A Aquarium, but perhaps not everyone might feel the same way. I showed photos of these toys to a few people and they agree that the dolphins look “sad” and “depressed”.

I’m not sure why they were designed to look like that. Perhaps it’s meant to portray a shy/bashful dolphin, but it is looking more depressed, sleepy or tired (the orchids on its forehead… injuries? bumps? dents?). It’s quite puzzling – given what happened last year with a particularly strong campaign by animal activists. A smiling dolphin would be better – despite the hard truth that dolphins are really not in a jovial mood when they appear to be smiling.

Now that the list of attractions and layout of the S.E.A. Aquarium is revealed, what do you think about the rumoured admission prices? Too high? Just right? Leave your thoughts via comments.

Prices stated in this format: Adult/Child/Senior

One-Day Passes to EITHER S.E.A. Aquarium or Adventure Cove Waterpark
$29/20/20

Stay tuned for further updates. You might also want to see the Marine Life Park – from the air series to view the development of the Adventure Cove Waterpark over the past few months.