By Dejiki on September 8, 2014 in Theme Parks, USS Park Updates

In case you missed it: BSG will reopen at the end of 2014, according to Genting Group. I’ve no idea why the news fell under the radar.

The blue track, Cylon, is well-known for its full vertical loop. Recently, the walls (and possibly) floor of the loop section has been painted green. This could possibly enhance the effect of the loop “going through the ground”. Previously this section has a mist pit, with white walls and flashing lights.

With track replacements and paint overhaul, some sections of the rollercoaster tracks look very new and clean.

Ride technicians were spotted along the launch bridge, along with some equipment.

The test equipment on BSG Human is still there, attached to the track.

Over at Far Far Away, construction has been moving very quickly for the park’s new suspended roller coaster. How does the entire track look like now? Check this out: 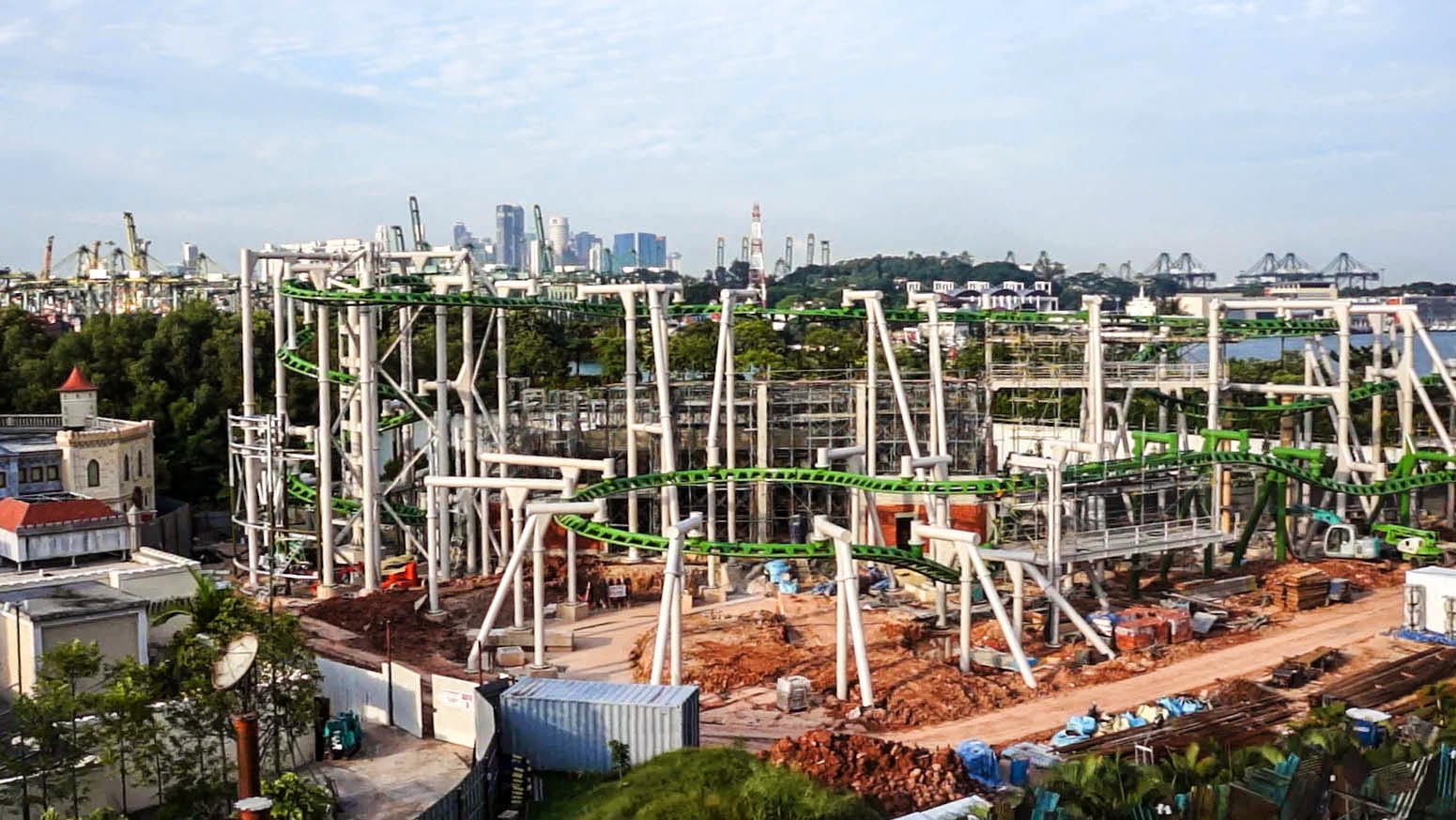 Thanks to Luke for taking this photo!

The entire track is now complete. When viewed at some angles, we can see the dips and banking scattered around the ride.

This attraction uses multiple block brakes – which is good news: It can have several ride vehicles moving around the track at any time.

With the track complete, works are ongoing to install the scenic elements. Here, the foundations are being put in place. The entire spiral lift hill will be surrounded by a rather iconic structure – it will be revealed in due time. 😉

Puss in Boots – The Dance for the Magic Beans

After a short soft opening, The Dance for the Magic Beans was officially launched on 6th September 2014. This mini stage show, at the new The Milk Bar in the park’s Far Far Away zone, features three characters: Puss in Boots, Kitty Softpaws and the Milk Bartender.

For some reason, the show is no longer called The Dance Off For The Magic Beans.

The park carved out a stage by demolishing the old Versachery store display.

What is The Dance for the Magic Beans all about? Read on:

The Milk Bartender, Alejandro, opens the bar in style.
(Do you recognise him from another attraction in the park? Post a comment if you do! 😉 )

He presents the magic beans to the audience, persuading them to act impressed.

Kitty Softpaws struts in, followed by Puss in Boots.

The competition for the beans quickly heats up…

And got a bit too hot.

Alejandro declares a draw – both contenders receive a bean each. Happy Dance Time!

Here’s a full video of The Dance For The Magic Beans, the new show at USS Far Far Away zone.

Mini Review: I found The Dance For The Magic Beans to be quite entertaining. The Milk Bartender did a good job getting the audience’s rapport. I must also commend the performers for being able to dance while wearing those character fur suits.

Generally, the show wasn’t too long, or too short. It’s somewhat cheesy, but not as kiddy as Sesame Street. One thing I felt the park needs to do: Ensure that the audience – both kids and adults can get good viewing spots (perhaps those in front may have to sit on the ground).

The Dance reused soundbites from the Puss in Boots film to voice Puss In Boots and Kitty Softpaws in USS. Yep – those spoken lines from the films – spliced together. It’s too expensive to get Antonio Banderas and Salma Hayek to record new lines.

After the dance, the stage quickly became a Meet and Greet spot. The park crew also tried to lead guests into Donkey Live. Perhaps this small show could bring life to the quiet end of Far Far Away.

Stick around after the show (about 8 minutes long) for Meet and Greet with Puss in Boots and Kitty Softpaws! (And the Milk Bartender, if you’d like). The queue starts from the left of the stage, so you might want to stand closer to the left and be the first few in line.

Fellow theme park enthusiast FF sent in these photos of the new Mini-Store of Evil.

Hilarious name aside, this pop-up store is located at the Hollywood zone, in between the Universal Studios Store and Hollywood China Bistro.

Shop till you drop dead at the only store worthy of the Minister’s endorsement!

The products on sale are similar to those at the Universal Studios Store for now. Of course, the shopping experience is more immersive here, with UV lighting and creepy items glowing in the dark. Would you bring some of these scary things home?

Monster Rock had their curtain call on 31st August 2014. The final show was eventful, with a very enthusiastic turnout. I’m sure those who attended would say that the energy was just phenomenal – the crowd really rocked Pantages Hollywood Theater.

I’ll have the photos up in separate tribute feature post. If you have any thoughts or messages you’d like to share about Monster Rock, do leave a comment so that I can compile them for that Tribute blogpost.

31st August marked not only the last show of Monster Rock, but the last performances for some of the park’s cast members as well. It was also a tearful goodbye for the Dinettes and some of the show’s fans.

And this is some amazing crowd for the final The Cruisers performance for some cast members.

Have you ever seen Hollywood so packed?

The Marquee at Pantages Hollywood Theater was quickly updated with its new show.

Sesame Street – WHEN I GROW UP will be performed at the theatre from 20 September 2014.

If the passholders already have a separate RWS Invites card, or Annual Passes to other RWS attractions, everything can now be combined into one card. Pretty convenient. However, it seems that the Annual Pass Lobby is being swamped with conversion and upgrade requests. Don’t be surprised to wait in line for a while.

This section of Far Far Away is oddly… empty. The queue switchbacks for Enchanted Airways have been removed.

Mysteriously, the park had one of those Show Times guide with no date printed on them.

The Star Characters store now has a fancy marquee. Looks great with the rest of the Hollywood building facades.

In all manners of strange: Sunglass Hut opened a branch in USS.

You can grab your PRADA shades here.

Marilyn seated in front of the Universal Studios fountain to meet park guests. Is this a new form of Meet and Greet?

Yes, DEJIKI’s Halloween Horror Nights – Before Dark is back. Read Part One here first, then move on to Part two for more day-time horrors.