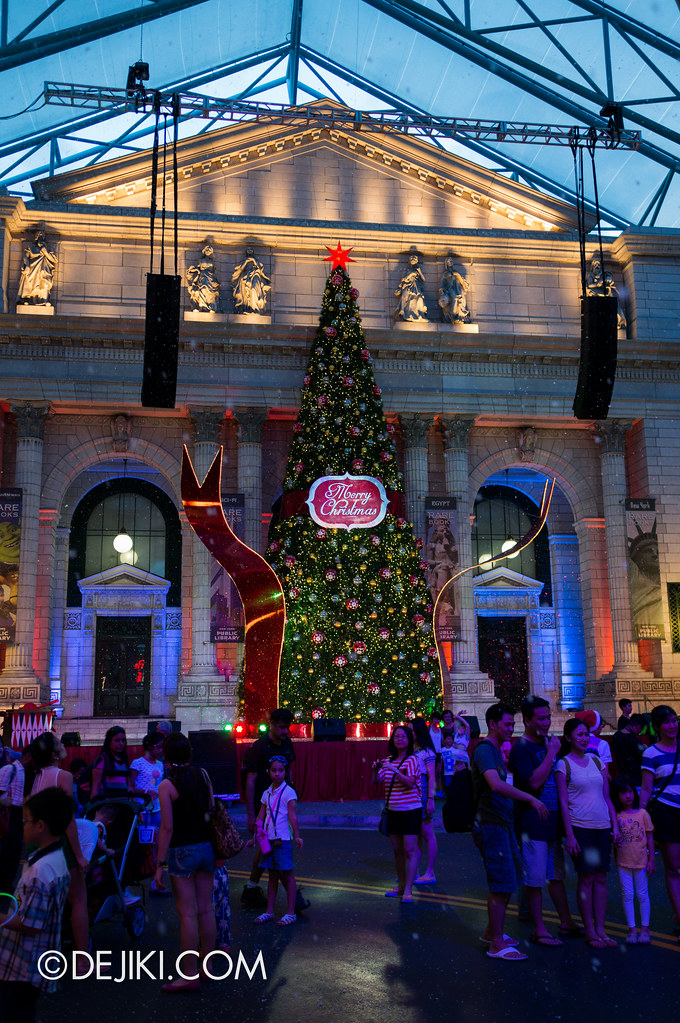 Here are some photos of the stage installation for Supernova Countdown. 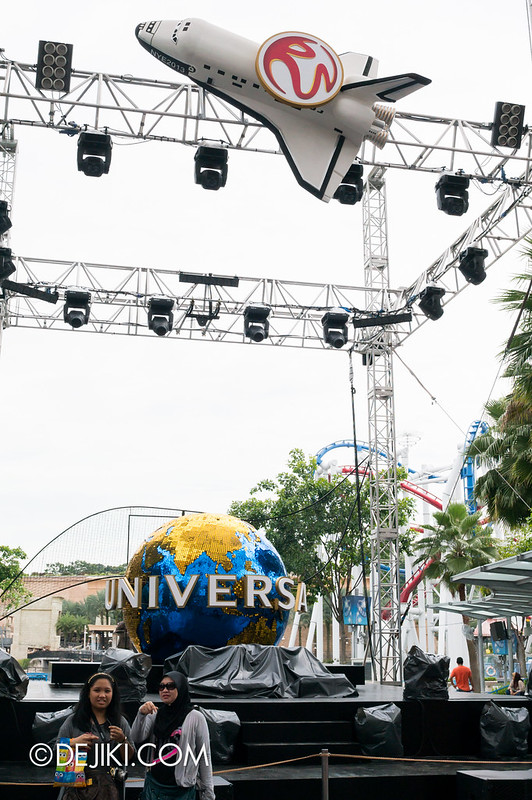 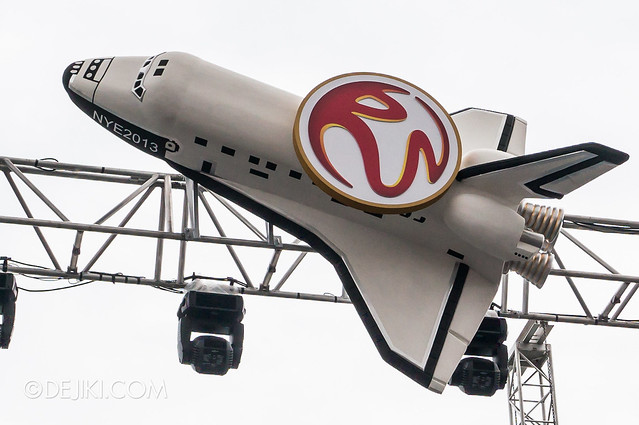 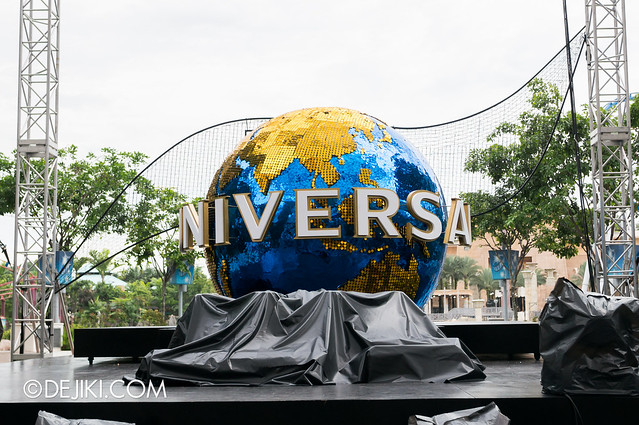 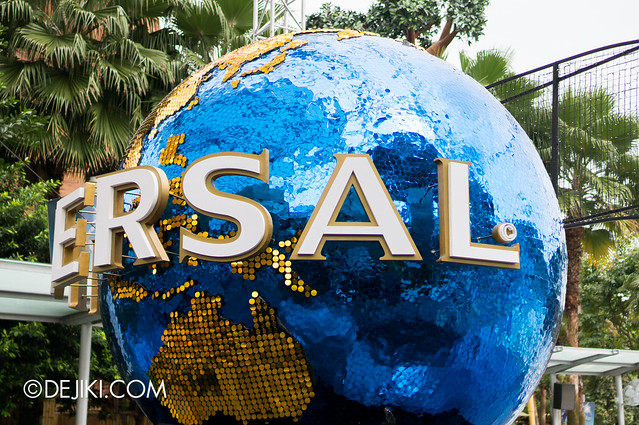 With all the light fixtures on the stage, this globe should be rather dazzling at night. There’s a little trap door behind, so who knows – the Lady Gaga tribute performer might just fly out of this.

The park was a lot more crowded compared to last week. It feels filled to capacity, with many rides using their extended outdoor queues (Transformers, Jurassic Park Rapids Adventure, Treasure Hunters, Canopy Flyer). Some areas of the park do get very cramped, so be patient while walking.

With ride working at their maximum capacity, breakdowns are more likely to occur – and I’ve observed the “blockbuster belt” (Revenge of the Mummy, Battlestar Galactica, Transformers) having technical difficulties in an almost sequential manner. Downtimes are normal, but when the entire belt goes down, it is best to stay patient and visit another area of the park while technical services recover the rides.

If you were inconvenienced due to technical difficulties (e.g: stuck on a ride), you will most likely receive these slips, or “Attraction Admission Pass” from crew members. 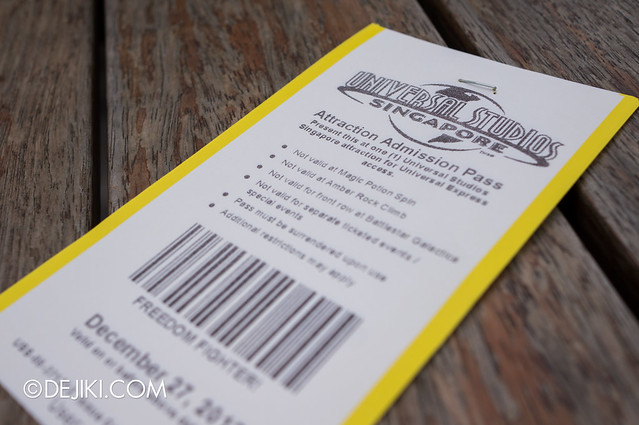 Ultimately, guests affected by ride breakdowns will need to queue again. So stay calm and use your free express passes. Refrain from complaining to crew members (who are already doing the best they can) or worse, demand more express passes. Yes, I’ve seen that happen.

Sesame Street Spaghetti Space Chase has been pushed to early 2013. It was announced on Resorts World Sentosa’s grand opening day that the ride will only open in Q1 2013. This makes this dark ride the “new attraction for 2013”.

Yes, I know what you’re saying. “Delayed again? Whatttt??” Over the years I’ve become quite prepared and expect new attractions to open later than announced. I’m not sure which new ride actually launched on time. Let’s see. Madagascar: A Crate Adventure opened after 14 months. Battlestar Galactica reopened 11 months after its incident. Transformers was slated to open before summer 2011, but opened in December 2011 instead. The good news is: Eventually all the rides did open and they are still operating today.

My guess is that Spaghetti Space Chase could soft-open between February to Early March, and be officially open in Mid/Late March. be open as early as February 2013.
(Edit: 26/12/2012. New sources reveal that the ride could be open during one of the weekends in February 2013) 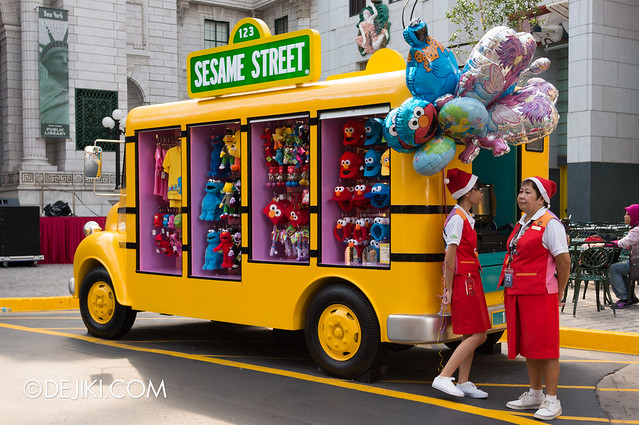 Crew members working at Sesame Street stores now wear the new uniform – a combination of a white polo t-shirt with a colourful vest over, with matching skirt or shorts. This was first spotted last month at the Photo spot outside the Brown Derby store. 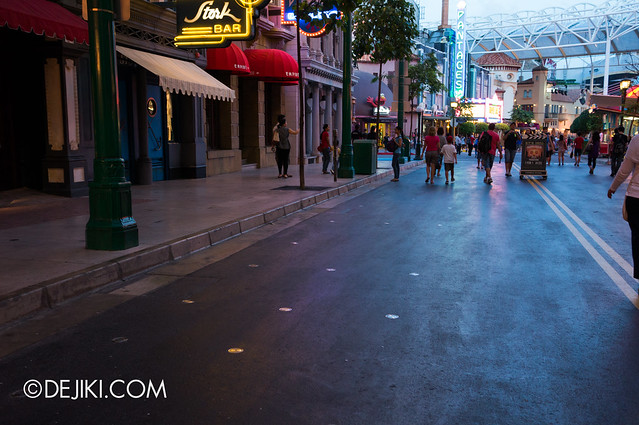 More disks installed on the ground of New York Street – the outdoor queue for Spaghetti Space Chase extends yet again.

In May 2011, it was reported that USS will receive 3 new attractions by 2013. Let’s gloss over the timeline for a moment, as we are days away from 2013. Two of them are said to be rides and will be “unique to Singapore”, which leaves the last one to be a non-exclusive attraction from another Universal Park. What could it be?

It was revealed in early December 2012 that another ride is in development and will open in 2014. The new attraction will be built “beside Shrek Castle”. As for what exactly – it’s still a secret, but we could guess: Either a much-needed replacement of Donkey Live, or an entirely new ride that will sit in between Far Far Away and Waterworld’s queue zone.

I’d wished that the park could expand beyond its current boundaries, but I have been told that it is very unlikely, at least in the near future.

Assuming that the park still intends to have 3 new attractions, it could mean:
1. Sesame Street: Spaghetti Space Chase
2. Unknown ride in development, to open in 2014
3. Unknown ride, to be built/already built at another Universal Park.

However, plans change all the time, and the information might’ve been incorrectly reported. Here are the park’s “new attractions” (not exclusively “rides”) since the news report in May 2011 (not counting Transformers):
1. Hollywood Dreams Parade (31st Dec 2011)
2. Monster Rock 2012 Revamp (Sept 2012)
3. Sesame Street Spaghetti Space Chase (2013)

Shots around the Park

With the Grand Opening of RWS (which means a lot of promotions and discounted tickets) and The USS Annual Pass Fire Sale 2012, park attendance is boosted to the Transformers-hype level even without new attractions.

However, I found that the wait time displayed at ride entrances to be quite inaccurate. Transformers had a wait time of 20 minutes but the line started outside the “NEST base” queue area (a wait of 45-60 minutes would be more accurate).

Now that the park is open for an extra two hours (until 9pm), it is possible to experience all that the park has to offer in a day without Express passes. Get to the park early and get on as many rides as you can in the first hour, or save the popular rides for last. Wait times drop significantly after 7pm. 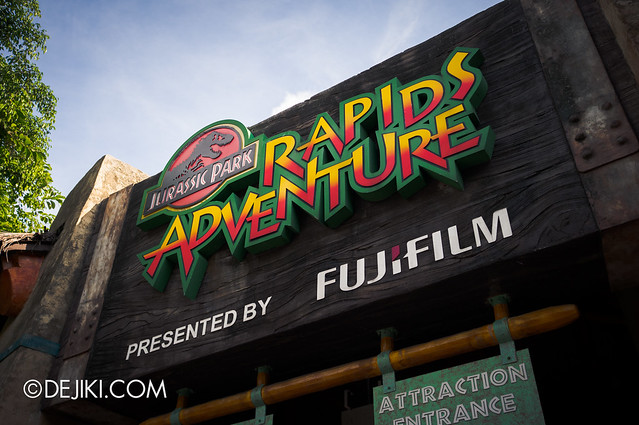 Expect very long wait times this holiday at Jurassic Park Rapids Adventure. The board says 35 minutes, but the line (which starts from the second room) usually means a wait closer to an hour. 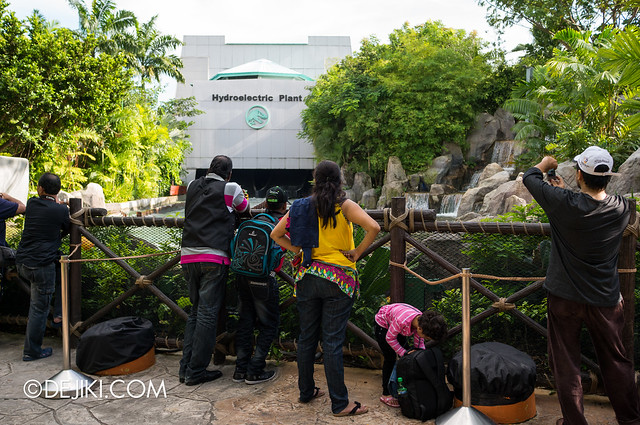 The Water Cannons at Jurassic Park Rapids Adventure were removed. Even the “Splash The Rapids Riders One More Time!” sign is gone. Are the cannons gone for good? 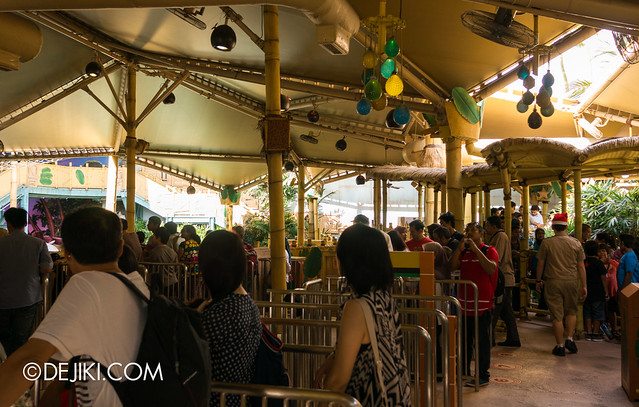 There was actually a line at Madagascar: A Crate Adventure at around 5pm. Haven’t seen this happen for a very long time. 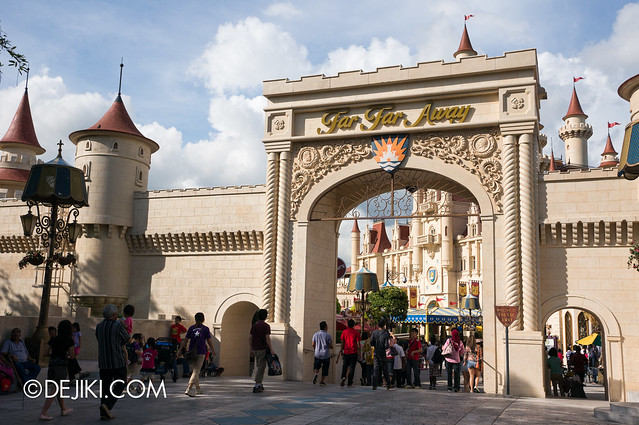 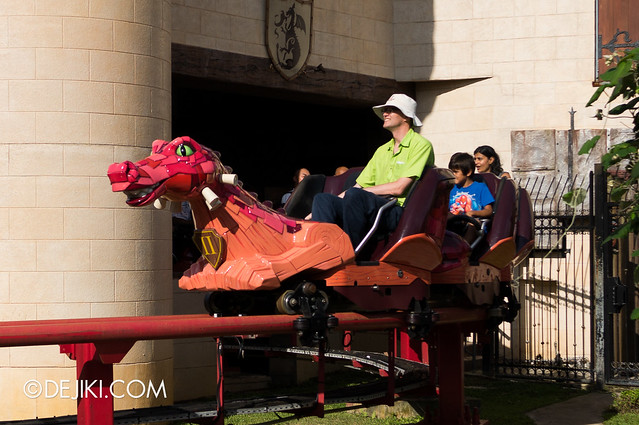 I know this happened some time ago: Over at Enchanted Airways, Dragon looks odd without her ears at the front of the rollercoaster train. Years back, there was a Baby Dronkey on her head, but it was removed. 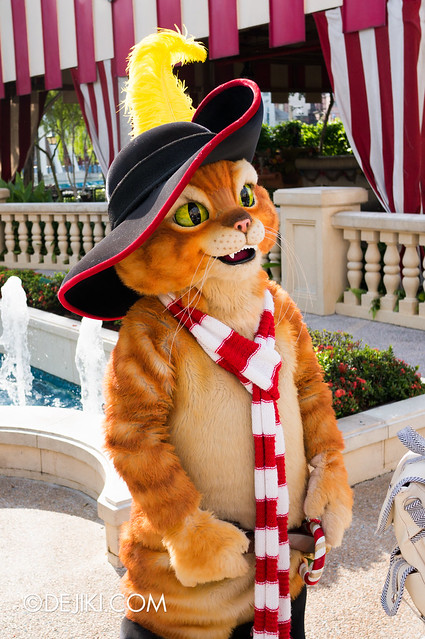 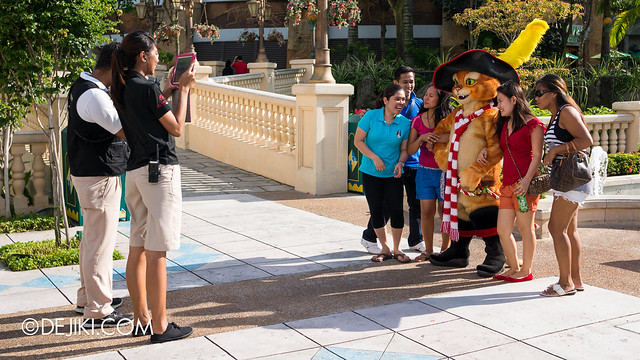 If you love taking photos with park characters, you will be pleased to know that many characters in the park are wearing Christmas outfits this year. 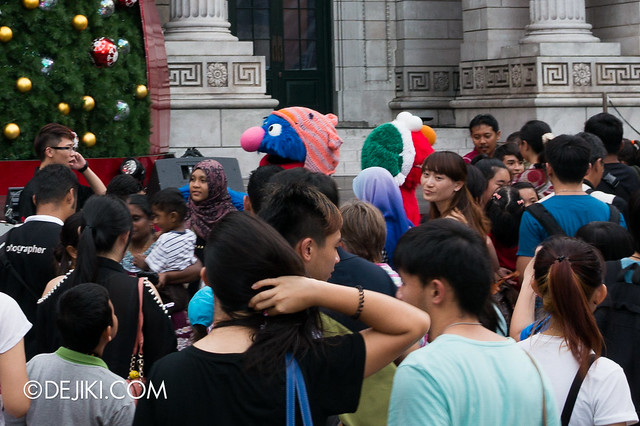 Be warned though: Meeting characters at New York street can become quite hectic. The Sesame Street characters get swamped by guests. If the characters are near the stage, be mindful of the street curb. It’s hard to watch your step when everyone’s rushing towards the characters, and people do fall down here. 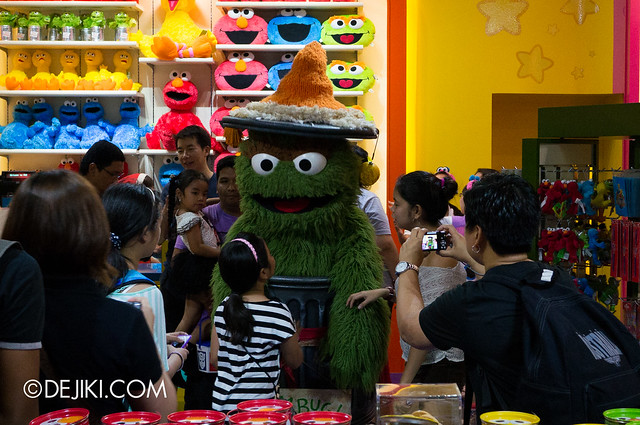 They might even appear inside Big Bird’s Emporium – an already crowded store! 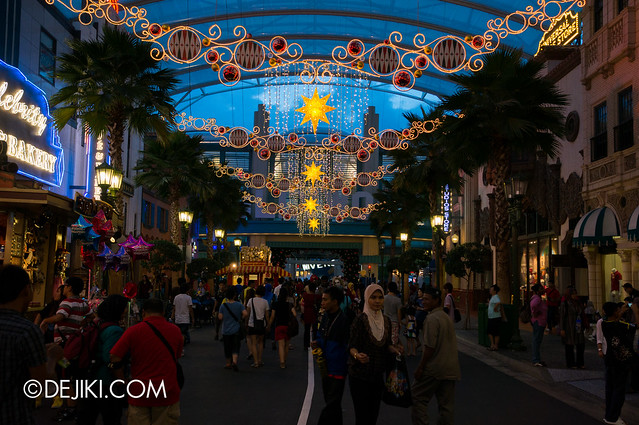 Here are some photos of the festive park decorations in the evening. 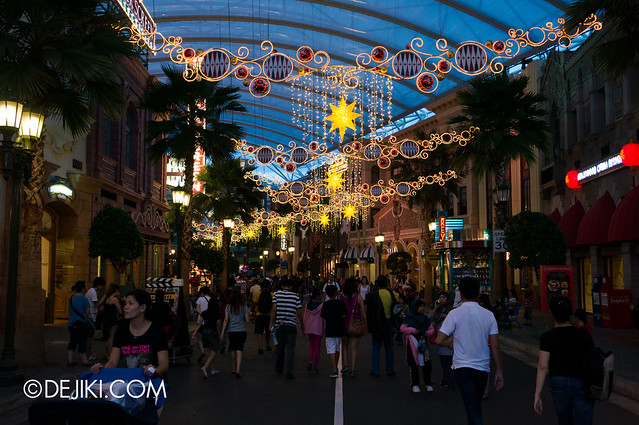 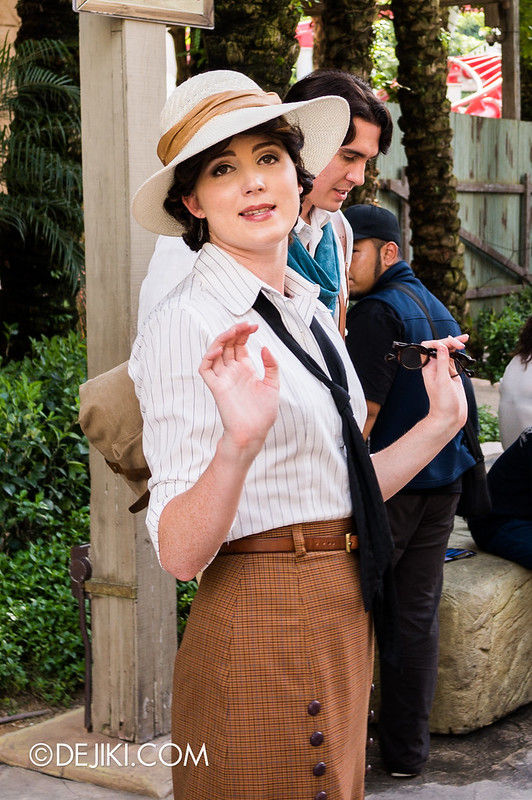 “Travel safe in these lands!”

One of the newer characters roaming Ancient Egypt is Evelyn in her librarian/egyptologist outfit, from the first film “The Mummy” (1999). Evelyn appears with Rick O’Connell, who has always appeared at the park with the outfit based on the first film. She has appeared in the park before, donning the black outfit during her adventures in the tombs.

Perhaps it’s a good time to find your good ol’ DVD of The Mummy and watch that hilarious clip from the first film (starring Rachel Weisz as Evelyn Carnahan). 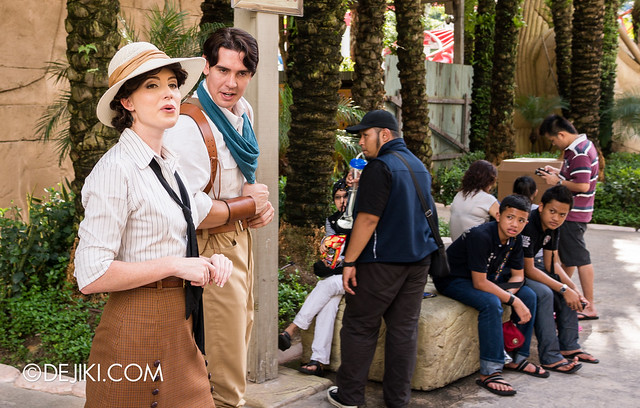 The guests are probably not amused by Evelyn’s british accent.

The Snowfall happens at least 3 times a day, usually at 1:00PM, 3:00PM and 5:00PM. It will also occur after the Christmas Tree Light-up show!

Starring Mel’s Dinettes and Daddy O’s, this show is performed in the evening (6:45PM, 8:00PM, subject to change). Snowfall on New York Street starts at the end of the show. The show runs for about 10 minutes and it is VERY similar, if not the same, as last year’s performances. Mel’s Dinettes have a new costume, while the Daddy O’s appearance is tweaked.

The songs and spoken lines are the same, although there are some variations in choreography. One lucky family will be picked to flip the switch on stage – lighting up the Christmas Tree and making it snow at New York Street. Santa Claus walks in at the end of the performance to meet the family. 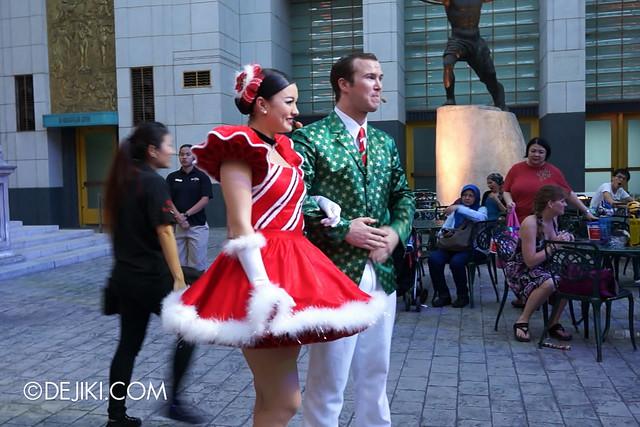 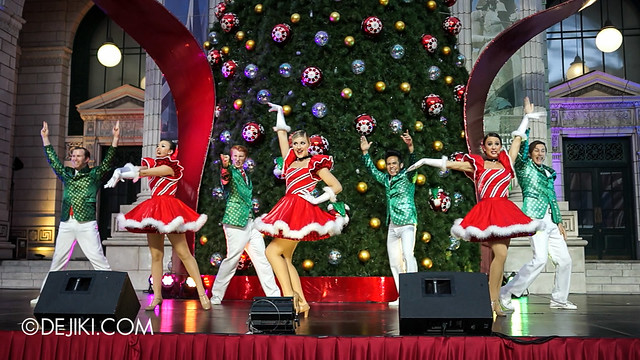 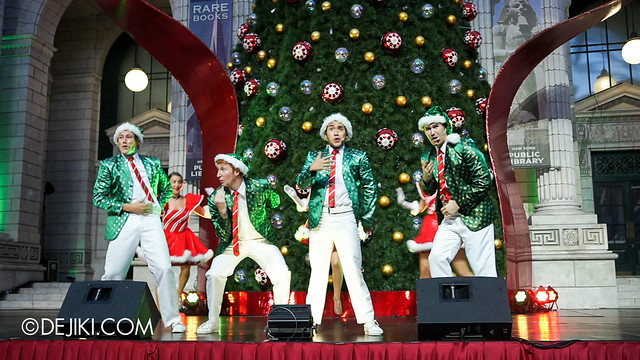 Here’s a bonus for you readers! A video of the entire Christmas Tree Light-up show!

That’s all folks. Enjoy your holidays! 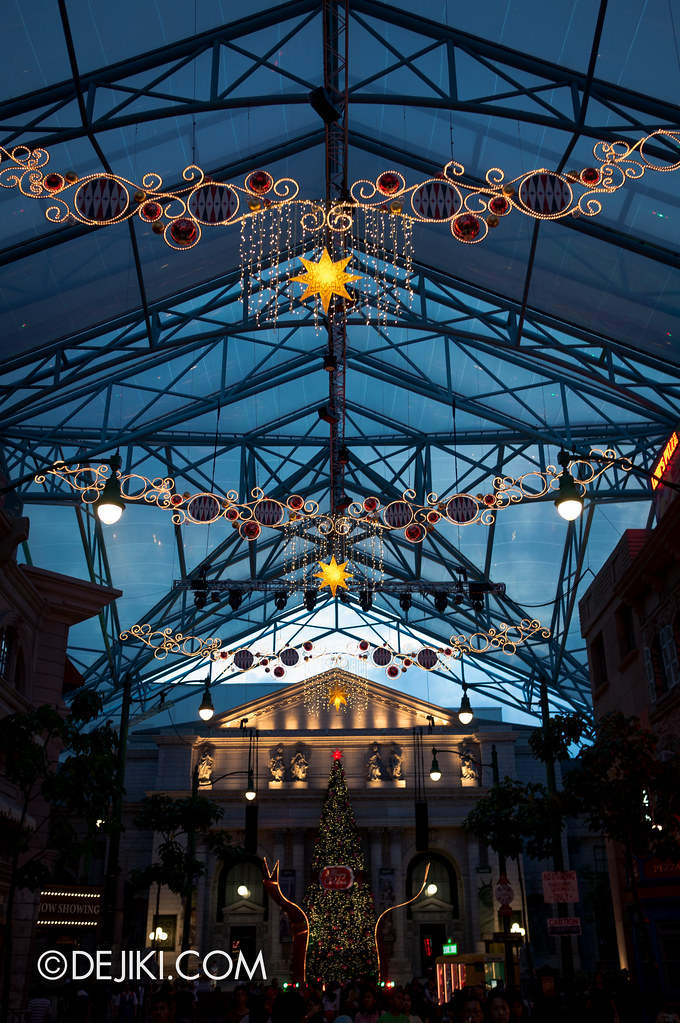