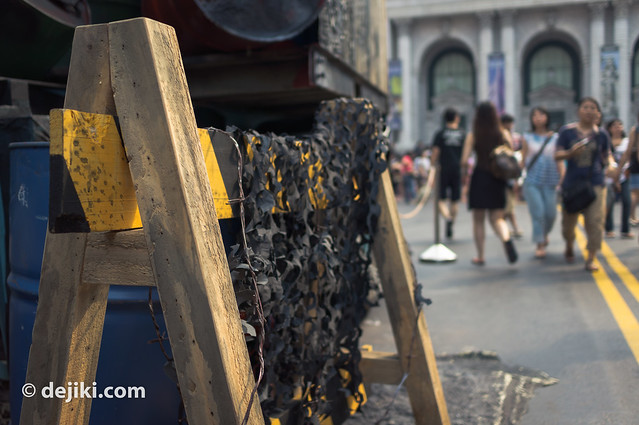 Here is the October 2012 update and photographs from Universal Studios Singapore. It’s going to be a busy month with Halloween Horror Nights 2 starting next week.

Hollywood After Party is a seasonal event, where the park transforms Hollywood into a party zone. It was expected to last until end of September. However, this event is now extended further, with three consecutive dates to celebrate the Resort World at Sentosa’s Grand Opening on 7th December. Here are the new dates:
NEW DATES: 1 Dec, 7 Dec, 8 Dec, 9 Dec, 15 Dec, 22 Dec, 29 Dec, 5 Jan
Other Upcoming dates: 3 Nov, 10 Nov, 17 Nov, 24 Nov

A few weeks ago, the music at the end of the ride has been altered. To me, it sounds like a “brighter, more heroic ending” than the original. It is also played from the unloading area, so it can be (confusingly) heard from the loading platform.

As Dejiki.com will be providing extensive updates of Halloween Horror Nights 2, content will be split up over several entries. This section will be updated when a new update is available.

First we have the Before Dark series, which are day-time updates of the staging of HHN2 props within USS. Here are some handy buttons to get to those entries.

Read it now! Review and trip report of scare zones, haunted houses, with many photos of Halloween Horror Nights 2 at Universal Studios Singapore! 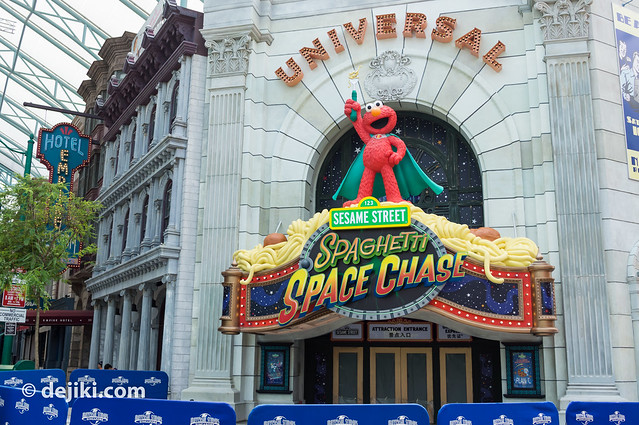 Resorts World Sentosa announced last week that the Sesame Street ride is titled Sesame Street Spaghetti Space Chase. The ride, which has been speculated to be a suspended dark ride (by many communities, and yours truly 😉 photos of the ride system – you’ve seen it here first! ).Based on past research and my personal opinion, it’s pretty much a mix of E.T. Adventure and Peter Pan’s Flight. It was in the park’s original plans to include an E.T. Adventure ride, but it just didn’t work out. My hope is that a ride that matches Monsters, Inc. Ride & Go Seek in Tokyo Disneyland, but that’s definitely too expensive to execute here. 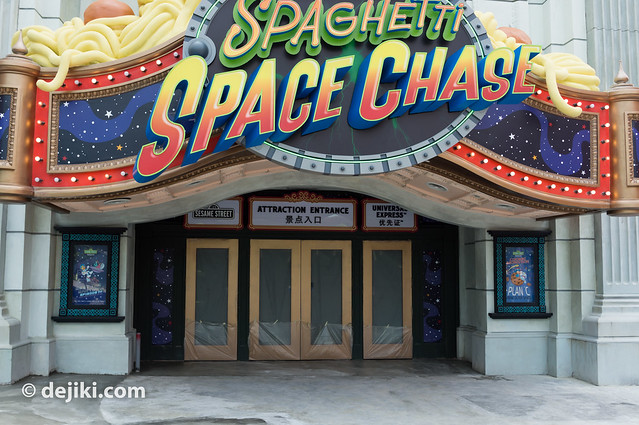 Like most other attractions, Spaghetti Space Chase will feature Universal Express. 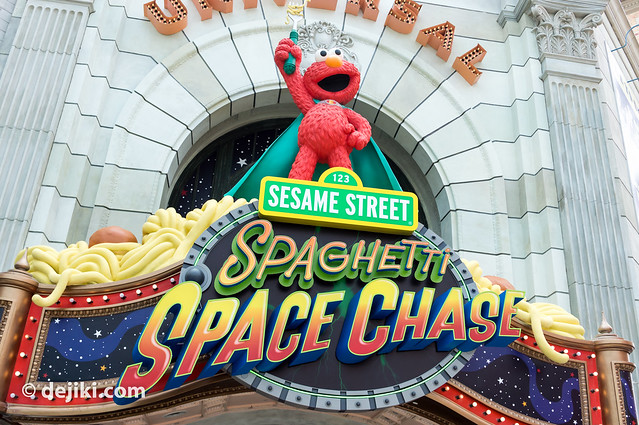 The ride’s marquee looks impressive and has some nice lighting.

Finishing touches are being done for the ride’s entrance, with some re-flooring work (and installation of ride signage and wait-time boards, not pictured, but there are two poles emerging from the ground). I’ve seen the possible ride exit and it’s not ready (at least for a week or two), as a lot of work was still being done there. 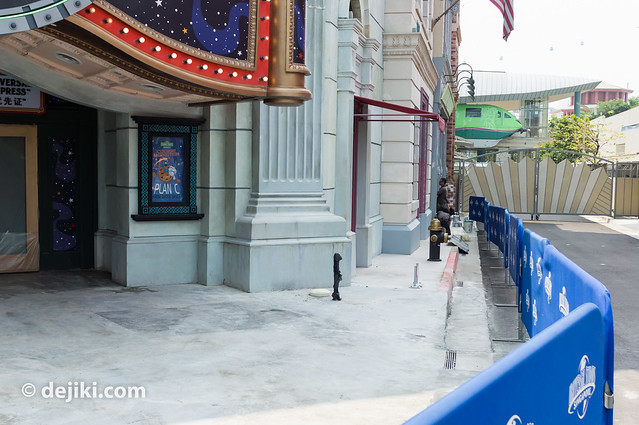 Also, there were some repainting works at the other side of New York (close to Stage 28, facing the exit of Pantages Hollywood Theatre) which might also either be routine refurbishment, or something else – another possible ride exit, perhaps?. 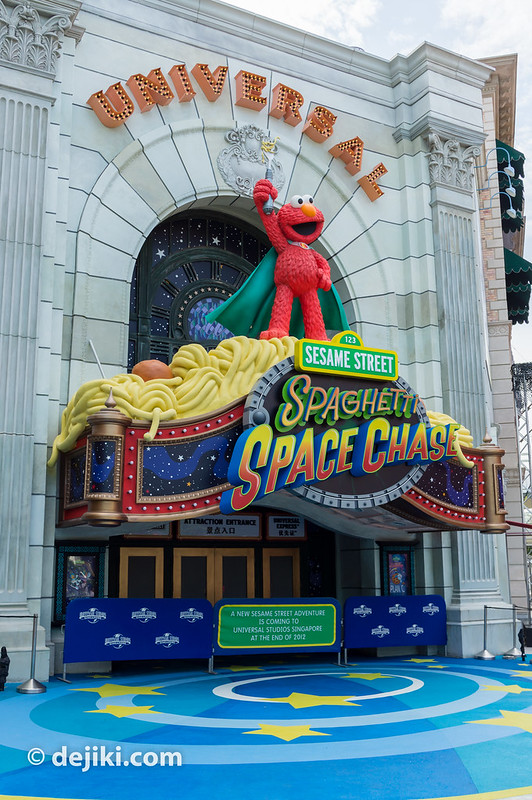 The new floor has been completed. It’s so.. colourful that it just bursts out of the “Halloween Horror Nights” palette that the other parts of New York is painted over with. 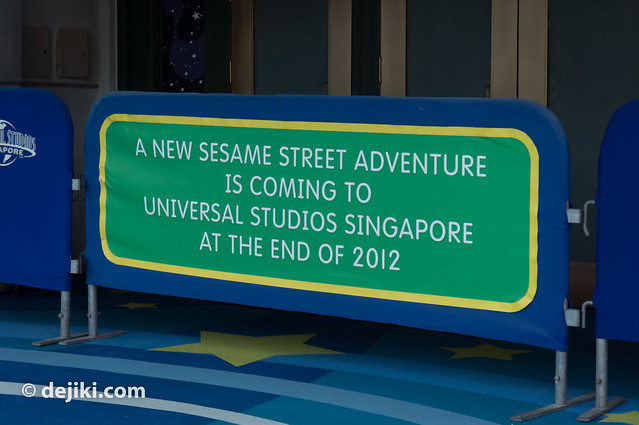 Once again, the park reiterates that the ride is opening very soon, but not so soon. A soft opening should happen in a matter of weeks. 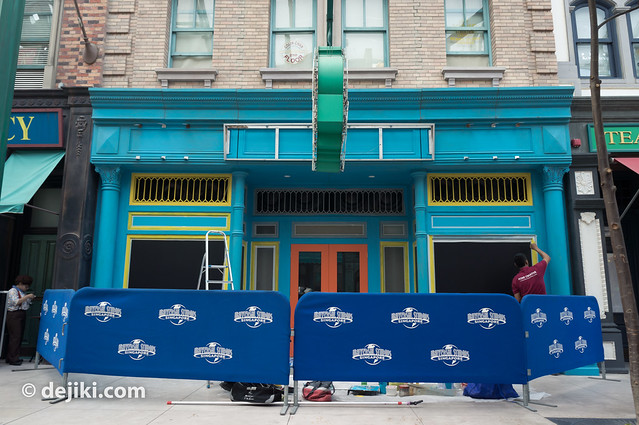 Luke told me that the Finnegan’s facade might not be a ride exit, but the actual Finnegan’s restaurant. They’ve even removed the bench here, if you’ve noticed. Recently the park has been “converting” some building facades in New York to fit the Sesame Street look, and it is time for Finnegan’s to take part in that. I’m not sure how much space the park actually has for another restaurant there, though.
Scratch that – Finnegan’s has been converted to Big Bird’s Emporium, and it is a retail store. 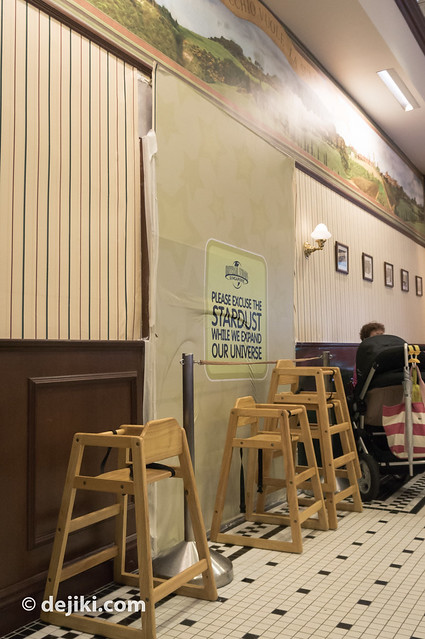 Inside Loui’s NY Pizza Parlor, a section of the wall has been cut a few weeks ago. Recently, the “wall” has extended outwards with the construction of a door frame. This links the restaurant to Finnegan’s next door. 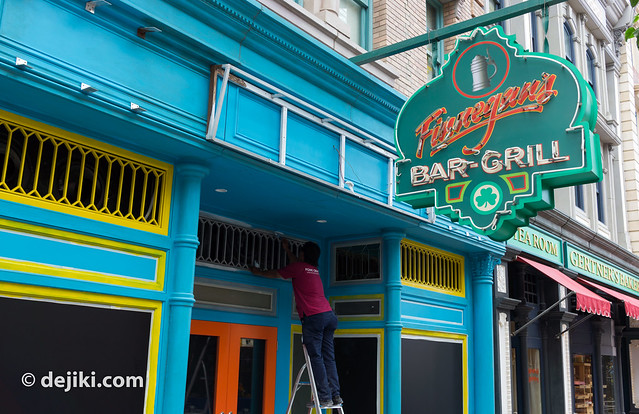 Back to Luke’s restaurant rumour, they might want to repaint the sign, if this is true. Having a restaurant might tie into the ride’s storyline – of hunting lost spaghetti, which originated from a restaurant called Ristorante Italiano (and to be renamed as Charlie’s Steakhouse, for reasons unknown).

If the ride exit isn’t here, then where could it be? Ride exits have to lead to street level, for safety and accessibility reasons. So far all of the speculated exits do not lead to the street directly (there’s still a curb). Even if it’s near Stage 28, that section of the street was still not altered for a ramp yet.

Anyway, on the topic of exits… Have a look at the outdoor switchback queue for this Spaghetti Space Chase attraction: 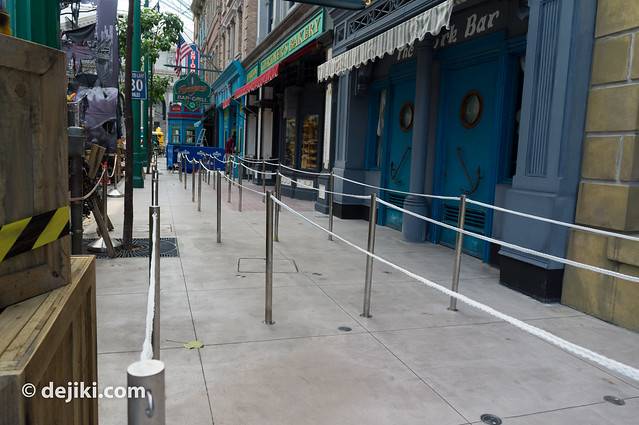 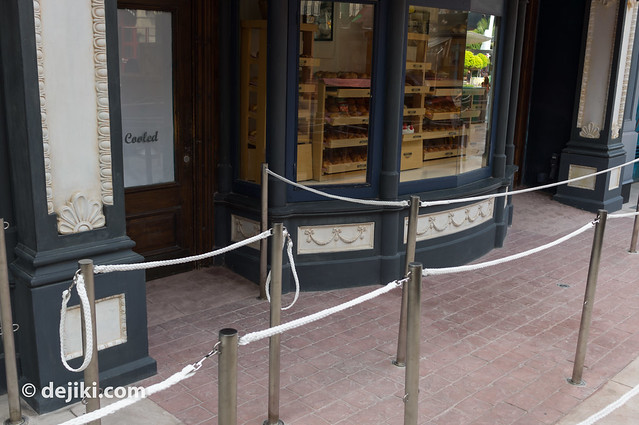 It all looks well, but then there’s this odd section in the switchbacks. It’s probably nothing. Certainly exciting that the outdoor queue is already up, which means that the ride may soft open very soon. 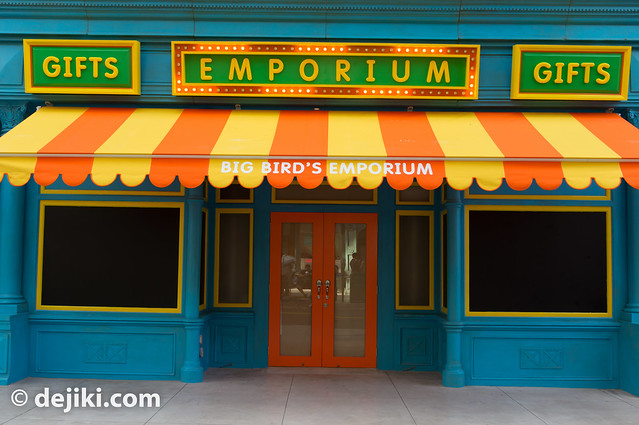 Fresh photos from the park showing the ride signage as well as a sneak peek at Big Bird’s Emporium. A big thank you to Joel L. for sending these photos in! 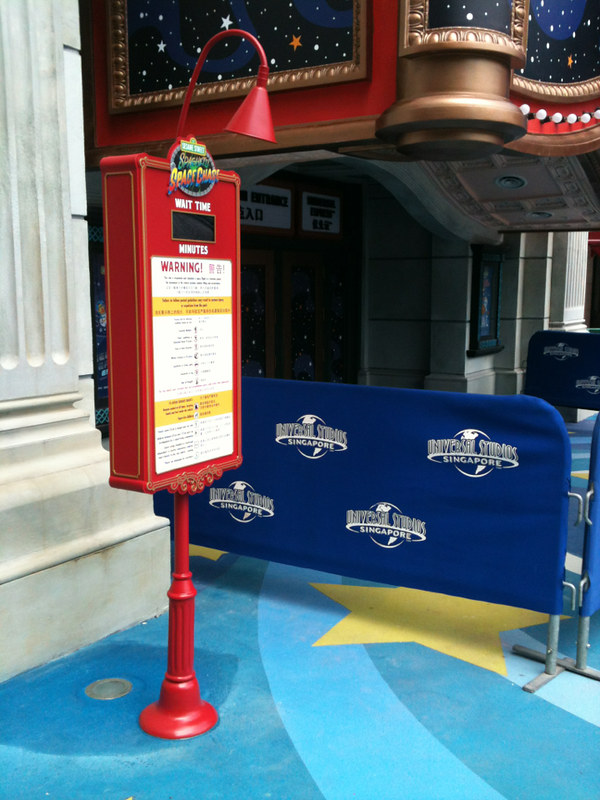 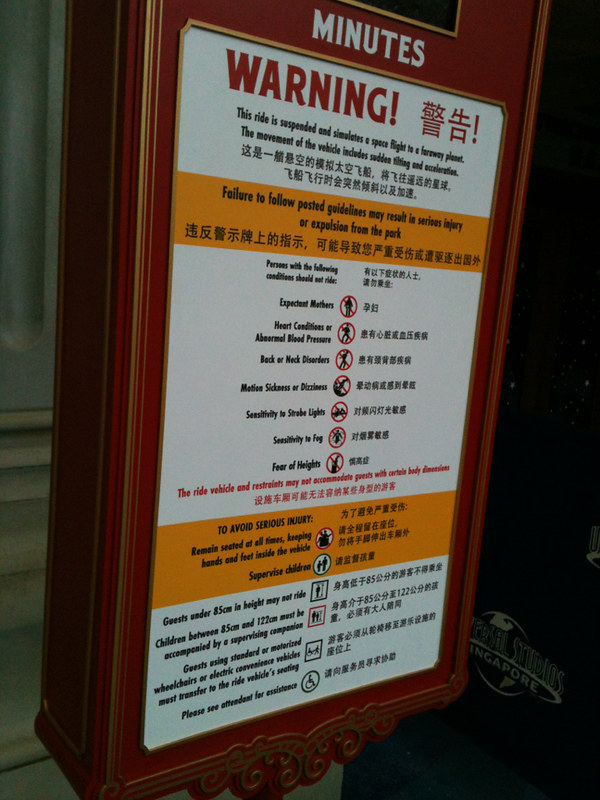 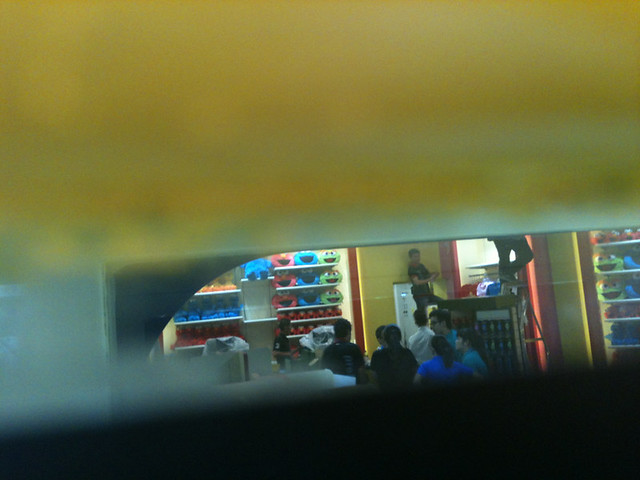 Sesame Street Spaghetti Space Chase has a minimum guest height requirement of 85cm. Children between 85cm and 122cm must be accompanied with an adult. Interestingly, there are safety warnings for: fear of heights, sensitivity to fog, strobe lights, motion sickness and dizziness. Looks like this ride will be a lot faster than we’d expect. 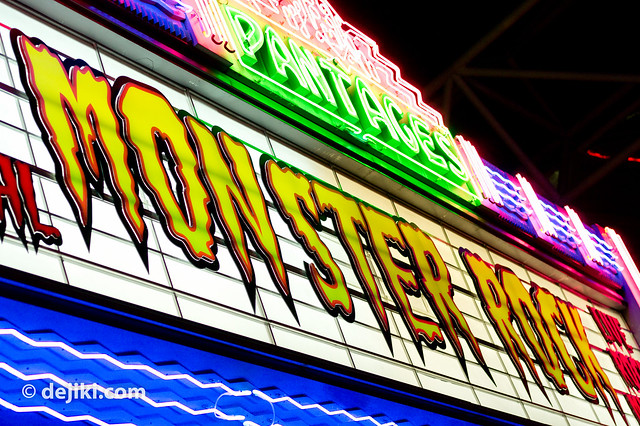 Recently, Monster Rock has been refreshed with new set list and choreography. Most of the songs were changed except for Wolfman/She-wolf and Dracula’s segments. The spoken lines remain the same (with the usual ad-lib).

(*Starts with short guitar solo from Here We Go, Let’s Rock & Roll, like in original production)

Phantom of the Opera
For Your Entertainment – Adam Lambert

For those who are curious, this is the old set list:

The Phantom
Welcome To The Jungle – Guns N’Roses

(^Modern cover of My Prerogative by Bobby Brown).

(^^Modern cover of Tainted Love by Gloria Jones and Where Did Our Love Go by The Supremes).

I haven’t had the time to watch the revised show until this week. The choice of songs are definitely more current than the last, and I observed that the audience particularly enjoyed the new opening. There are still some areas that could be tweaked, especially the way the songs are put together – there are still remnants of the old cues/leads lying about. There are new lighting effects and new animations for the LED panels on the stage as well.

This marks the second live performance attraction in the park that has been updated significantly. The first was Kowabunga Kove – a live street show performed outside Mel’s Diner – which has been replaced in early 2011 by Mel’s Dinettes and The Daddy-Os. 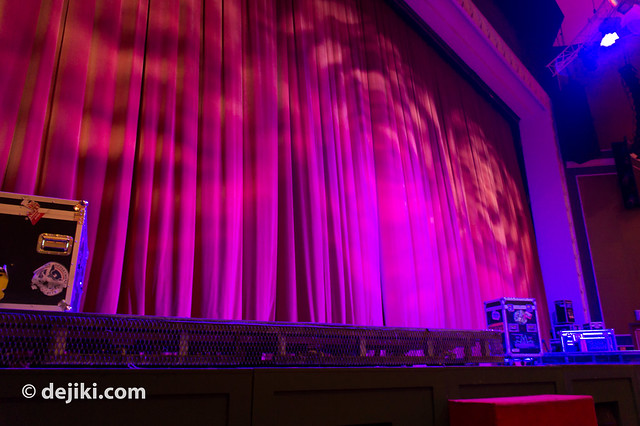