By Dejiki on November 30, 2013 in Art+Culture, Attractions 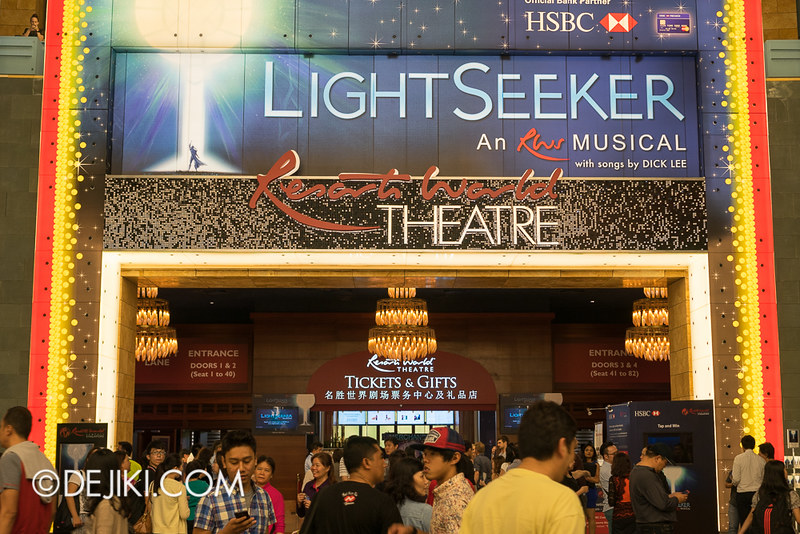 Resorts World Sentosa’s latest musical, Lightseeker, is now showing at Resorts World Sentosa (RWS) Theatre. This dazzling spectacle boasts a stellar cast, great songs, impressive sets and a myriad of special effects, stunts and dance. But did the producers push the genre too far? Find out more in this review. 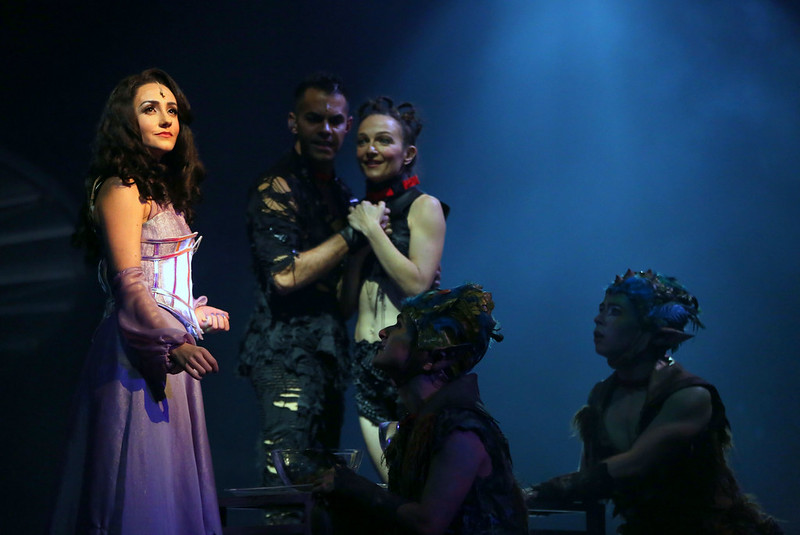 Nova with Nou, Ping and Imps

Once again the same creative team has created yet another fantasy-themed show. Lightseeker does feel like it has evolved from Voyage de la Vie and Incanto. Don’t get me wrong – The show is more refined, but it still retains the bizarre feel of its predecessors. Building a story about magic and fantasy often means the same set of constants and variables.

The first two shows at RWS kept to a similar structure (and story, even) but Lightseeker clearly attempts a more fleshed-out narrative. It is far more complex but still mirrors the clichéd tale of metaphorical soul-searching and that “it’s always within you” speech. Parts of the show felt convoluted and cheesy.

Truthfully, the first act is quite… unfamiliar and disjointed. The strange pacing might be difficult for theatre regulars to sit through. The show picks up in the second act, with more crowd-pleasing acrobatic acts and some sense of urgency with the story. 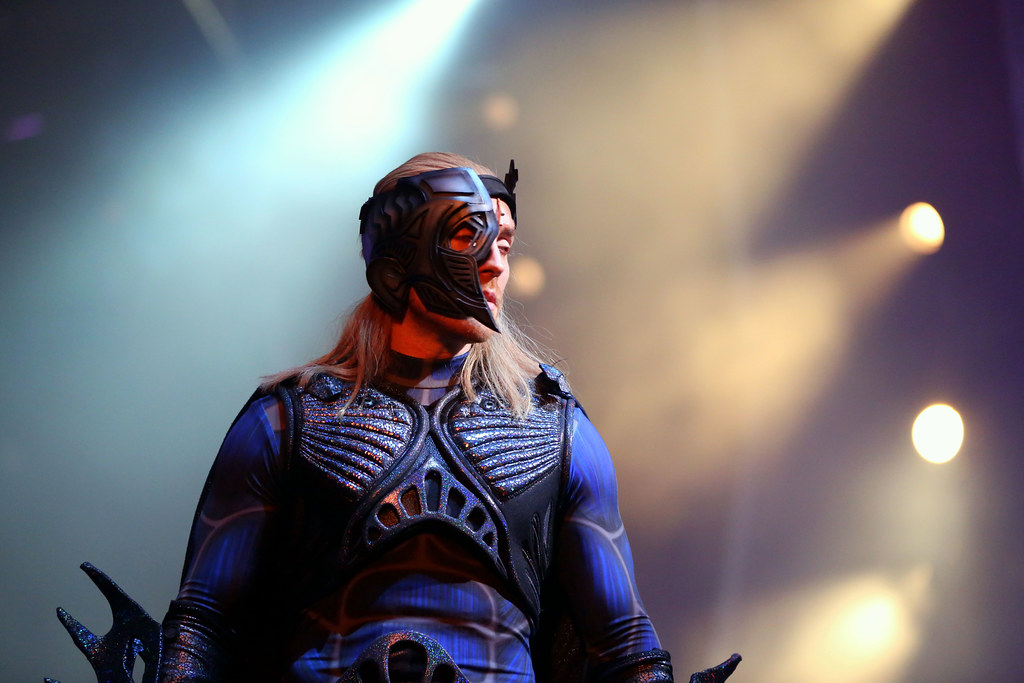 Created by Andrea Teo, Lightseeker revolves around the dutiful General, who searches The Light (a mystical energy) for his master (the omnipresent Emperor) with the power-hungry witch, Usha. After several failed experiments to capture the Light, Usha leads the General to a girl – Nova, who is able to call forth the Light. The General’s conviction for his quest wavers after meeting Nova, as he becomes conflicted with his loyalties.

The producers definitely wanted to leave the audience in awe with grand sets and visual effects at Lightseeker. Even though several sets appeared only for a scene or two, there seems to be no expense or effort spared in making the all-new stage look impressive.

An incredibly large display is used as a dynamic backdrop. The stage’s sliding curtain also forms a screen when closed. Several parts of the show, including several minutes of the show’s backstory, is presented through cinematics projected here. I was pleasantly surprised at the quality of the CGI effects – certainly the best so far to ever grace the RWS theatre.

Like the last two shows, Lightseeker boasts a large dance and acrobatic ensemble. It is a spectacle of Sci-Fi meets Fantasy Forest – and the extra-wide stage is often filled out. 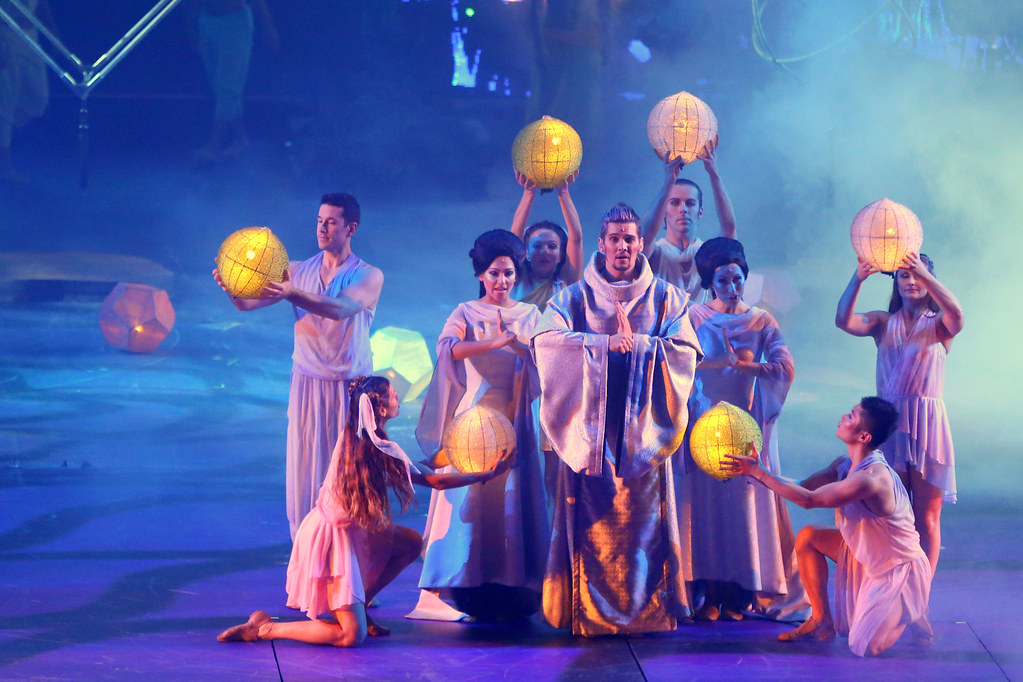 The Priest and Priestesses

There is a lot to see in the world of Lightseeker – a large cast of unique characters and exotic scenes. This also means the “Voyage de la Vie” effect is back again – most of the show the audience is taken on a journey through elaborate scenes introducing characters and places, but never to return again. The only scene that is revisited is the “Conjure Room” – a circular chamber with a rotating platform. 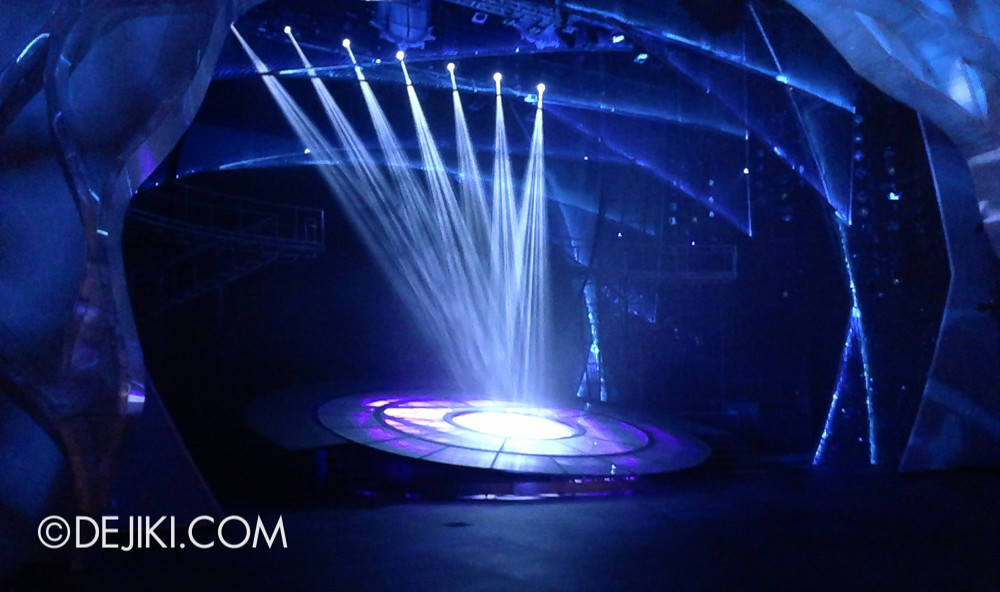 Dance, Acrobatic Acts and Stunts – Too much

Dance, acrobatic acts and stunts are used very often and while they are well staged and enjoyable, I felt they made the production quite clunky and detracted from what the show claims to be – a musical. Many songs had a great start, then turns to very lengthy acrobatics and dance for several minutes, and switches back to song – to be wrapped up. It happens a few times.

This is where I felt that Lightseeker is still living in the shadows of the last two shows. There are also several moments where a lot is going on that it distracts the audience. 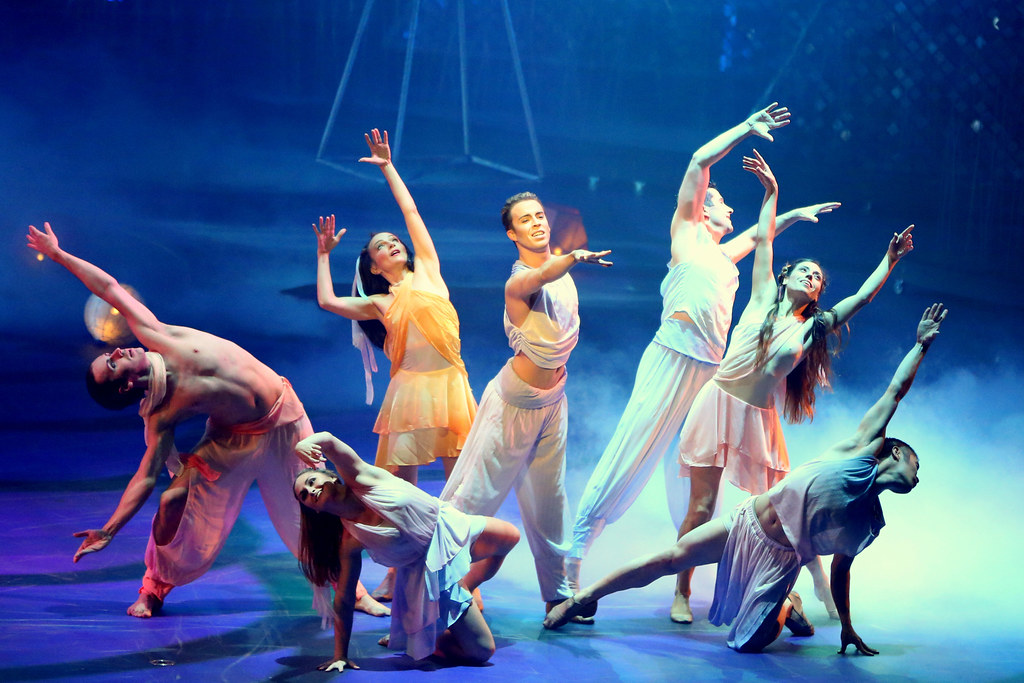 Is the show – as a musical – too short, that it needed all these segments to pad its duration (90 minutes)?

The setting up of rigs and sets for acrobatic stunts clearly took up a lot of time, and caused some awkward pauses. The odd part is the setup often happened during the quieter transitions between scenes. From the stalls, mechanical noises and crew chatter could be clearly heard through the stage’s translucent curtain.

Paragraphs on the musical’s creative team has been amended for clarity. I apologise for the omission in the original review.

Jonathan Lim‘s experience over many RWS projects have also refined his work as musical director in Lightseeker (I did enjoy some of his compositions in Incanto and USS). With veteran composer/arranger Bang Wenfu, the duo created Lightseeker’s original musical arrangement and orchestrations. The result: A eclectic (and electronic), auditory journey and memorable numbers. I’ve overheard some people humming the tunes after the show. My personal favourites are “Look Ahead”, “The Light Within” and “Only A Man”. 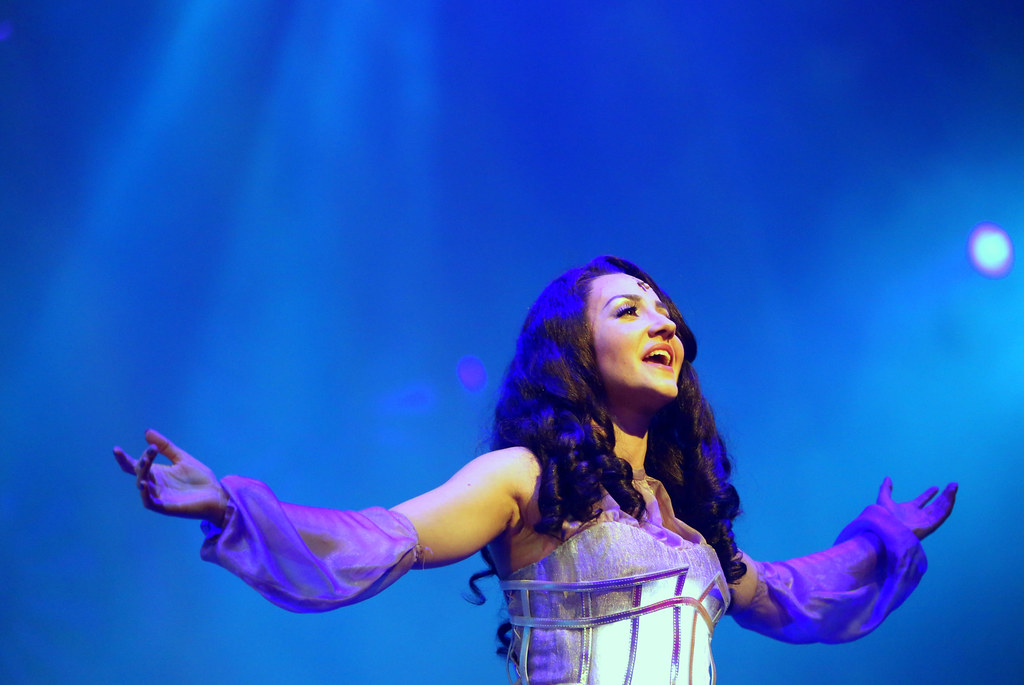 The cast is a stellar gathering of seasoned performers from around the world. It is always a delight to see and hear Sarah Brown (Nova) on stage. Her vocals are alluring and impeccably smooth. Traits of her character, a spiritual goddess, are reflected in her voice. 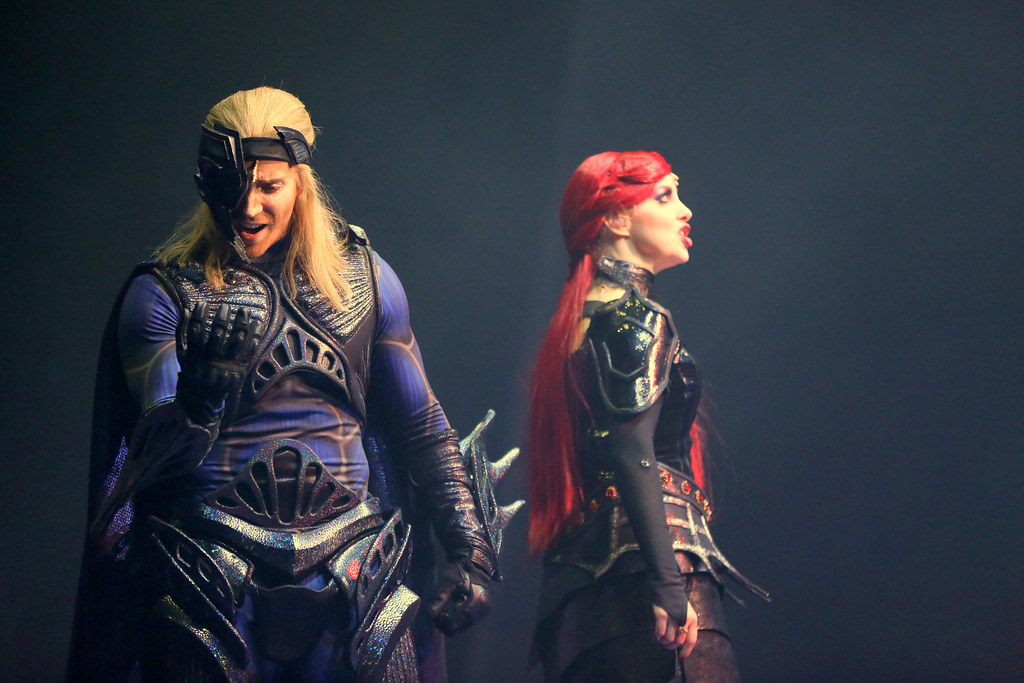 The General and Usha

Stuart Boother (The General) brings a deep, commanding presence. His solos are the pop/rock numbers in Lightseeker, which allows him to display his range and tonality (though parts felt clunky, perhaps some lines could be rewritten). 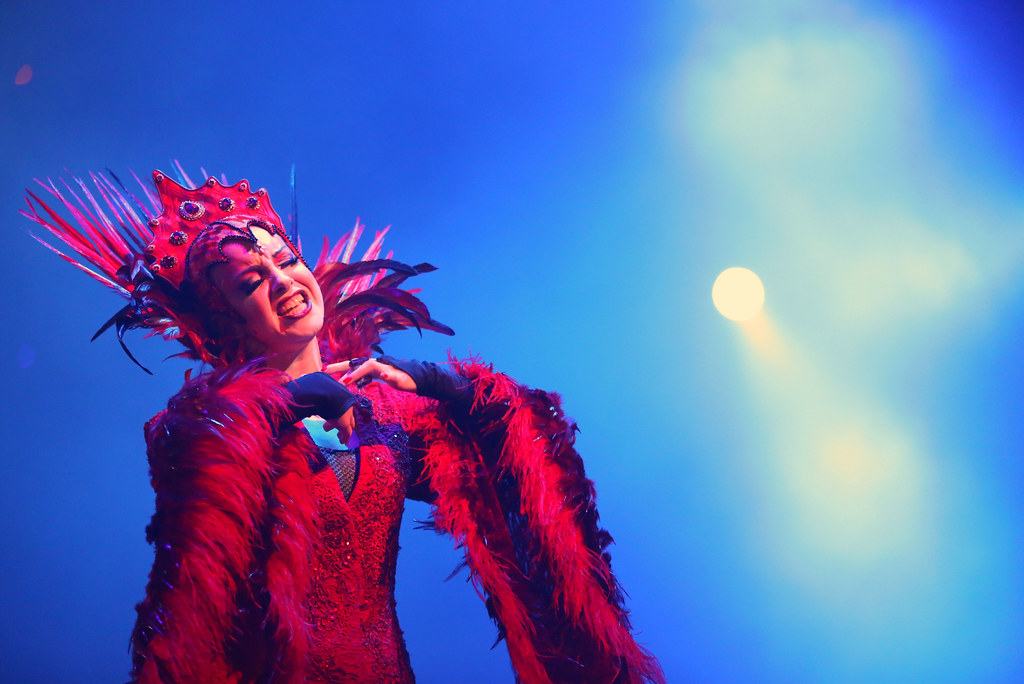 As the vindictive witch, Vivienne Carlyle (Usha) belts out striking numbers during the show. I felt that her songs did not flow as fluidly as the other principals’ solos; and the show’s writing did not allow her character to develop. It’s a pity – she wields both powerful voice and stage presence (along with a second costume – exquisite, albeit cliché, feathered outfit in red).

The other members of the cast had numbers that were not particularly remarkable, or felt rather forced; nonetheless it was an exhibition of strong vocal talent throughout the show. Definitely a great improvement from Incanto and Voyage de la Vie.

Also, it sounded like the horrible EQ that has haunted the RWS Theatre is fixed for good, with only a couple of songs slightly drowned out by heavy electro-rock score.

Instead of an ordinary musical, Lightseeker offers a theatrical spectacular of songs, dance and acrobatic acts. The show has good potential with its memorable numbers and amazing cast. No show is perfect from the start, and especially not for an all-new musical. With some editing and tweaking, Lightseeker could be one of the most remarkable local productions yet. 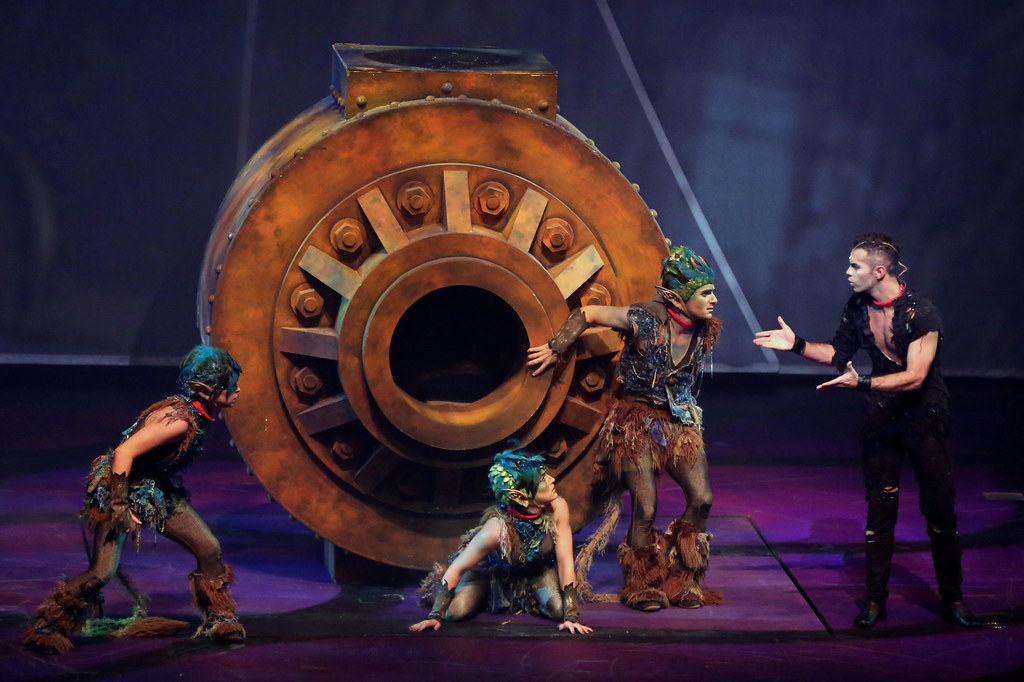 The Imps and Nou, with a very familiar prop.

Lightseeker is now showing at the RWS Theatre from now till 23 March 2014. A pre-show dinner is available at Osia Restaurant and will be featured in another entry.

The show is 90 minutes long with a 20 minute intermission.

Special Thanks to RWS for inviting Dejiki.com to the Lightseeker Media Night.

2 Responses to Lightseeker at RWS Theatre – a review