By Dejiki on September 19, 2013 in Theme Parks, USS Park Updates 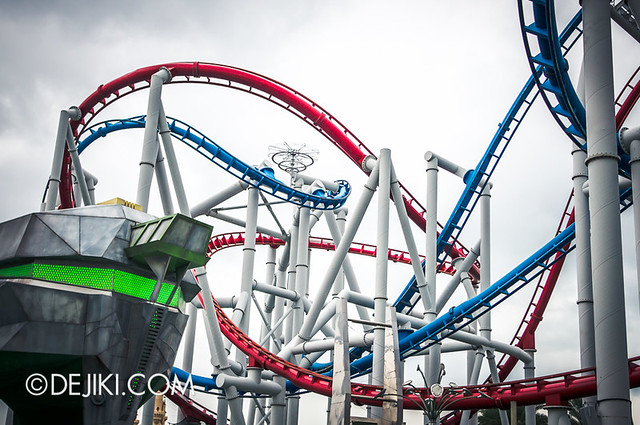 What’s new at Universal Studios Singapore? Read all about it in the September 2013 issue of USS Park Update.

Battlestar Galactica: HUMAN vs CYLON, the park’s hallmark dueling roller coaster attraction, is still closed. It is nearly two months since the Viper Mark II and Raider roared at the launch tracks. The park has not issued a statement about the incident and recovery timeline. The official word is still “attraction review”.

As I’ve been frequently receiving questions about the roller coaster a lot (in fact, I find it too much to handle now), let me just give you some details to put things in perspective: when this attraction was shut down in March 2010, results from the investigations only surfaced in August 2010. The ride began closed testing four months later, in December 2010. It was only in early February that the ride soft opened for guests and then the ride officially reopened at the end of the month.

So yes, BSG is still closed and will still be closed for many months ahead. And to answer other popular questions:

The Season Pass is now available again and for everyone. Season Passes are like Annual Passes, except that they are valid for 6 months instead of a year. Here are the prices:

For details on all Annual and Season Passes, including benefits and Q&A, refer to The Guide to Universal Studios Singapore Tickets and Annual Passes.

With the park’s two key attractions (Battlestar Galactica: HUMAN vs CYLON) down indefinitely, this is obviously another effort to entice guests to become regulars. As I’ve said before, it’s a risk to have guests associate visits with lowered price and not variety and quality of park’s attractions, or the experience of being in the park. There’s only so much leverage they can get with price drops. Guests will eventually become unwilling to pay more, as the perceived value of the brand and experience has already dipped. But… if these actions allow the park to earn the budget for better attractions (and by better attractions I mean The Wizarding World of Harry Potter, not Kung Fu Panda or Despicable Me or Hello Kitty Land), then we might see brighter days in the future. 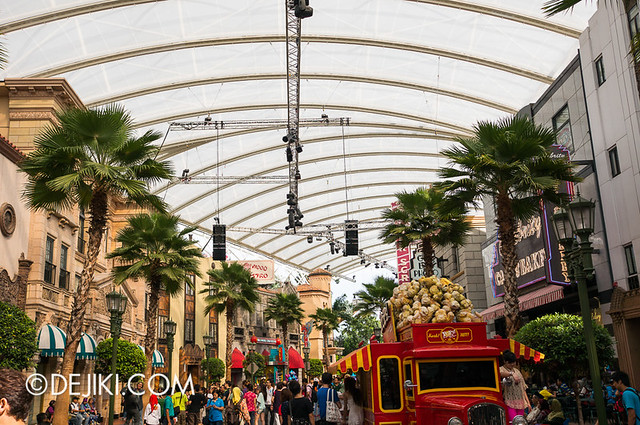 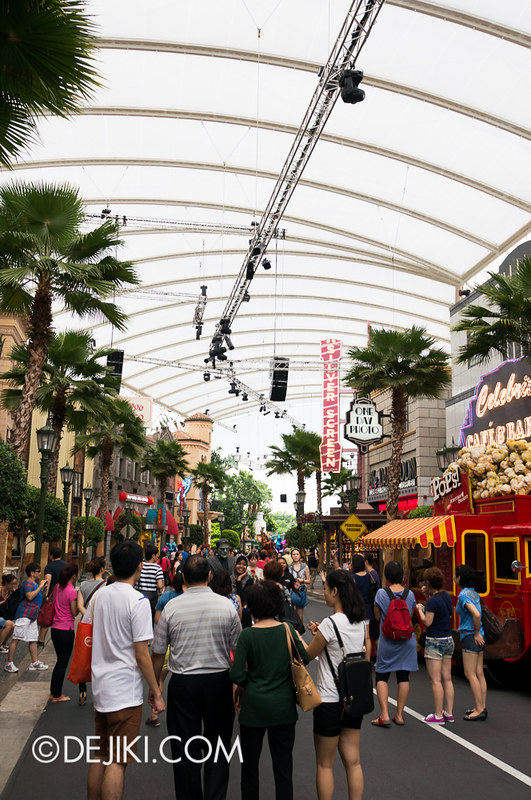 Interestingly, there are a lot of lights installed at Hollywood, despite it not being a scare zone this year. Or is the park brewing a surprise? 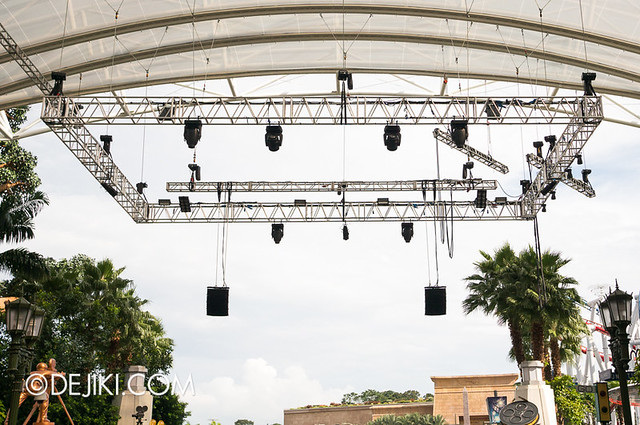 The ones here are for the stage for this year’s icons – the Three Sisters of Evil. 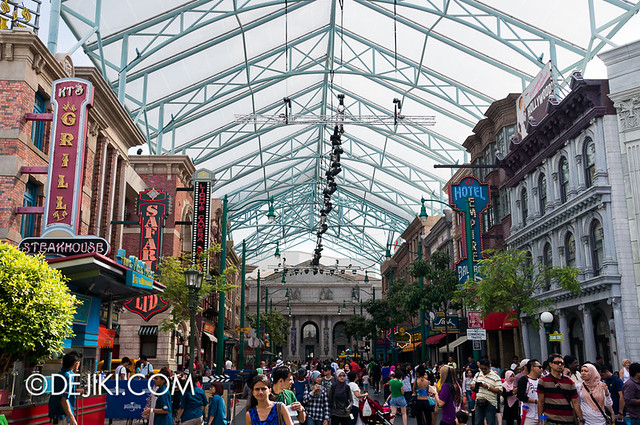 The number of fixtures at New York is startling. One projector has gone up, facing the New York Library building. There’s an interesting cross-shaped layout of lights in front of the library too. 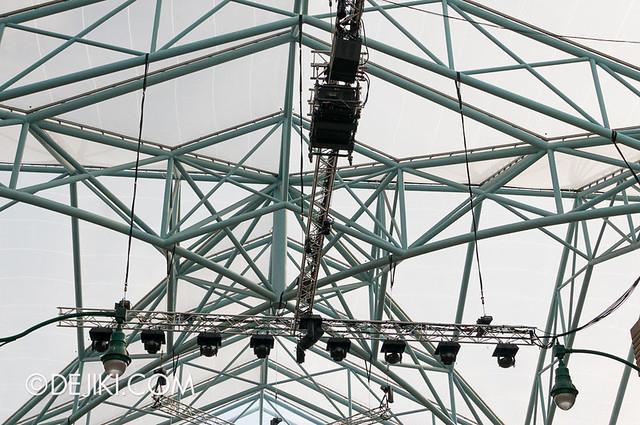 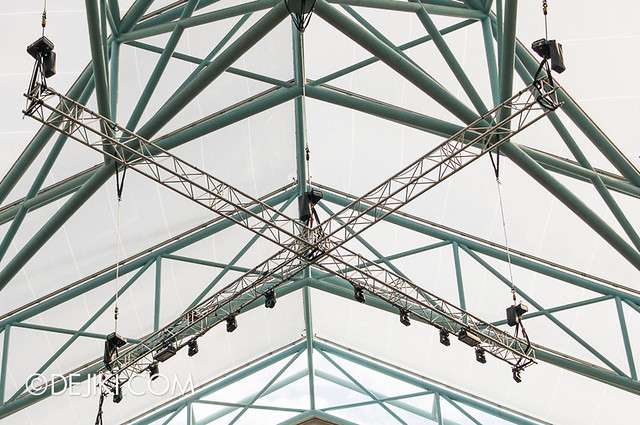 As all three Haunted Houses are in enclosed areas, there isn’t really anything to report about them – unless the park surprises me with a backstage tour, but we all know that won’t happen. 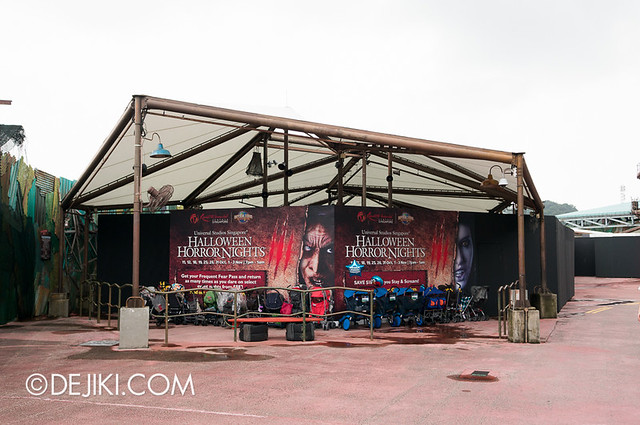 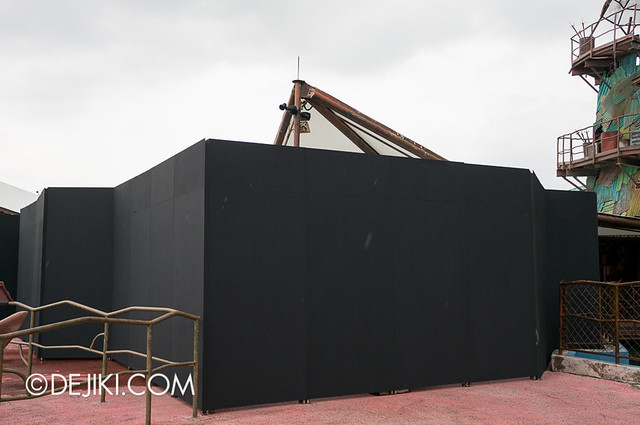 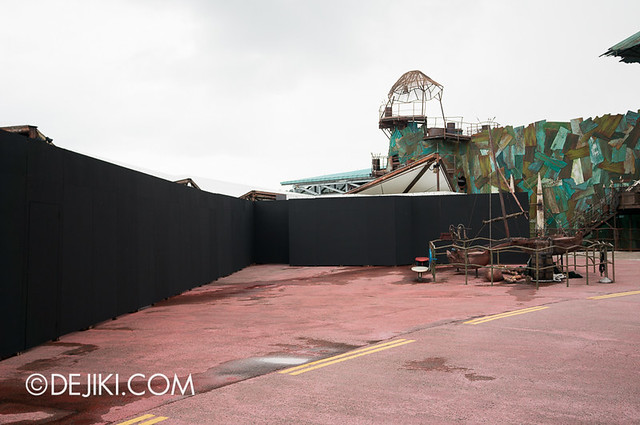 The Possessions maze at Waterworld’s outdoor queue area seems to be coming up quite nicely. It’ll be as large as the Insanitarium last year.

Meanwhile, check out this video to learn more about this year’s icons from the event’s creative team: 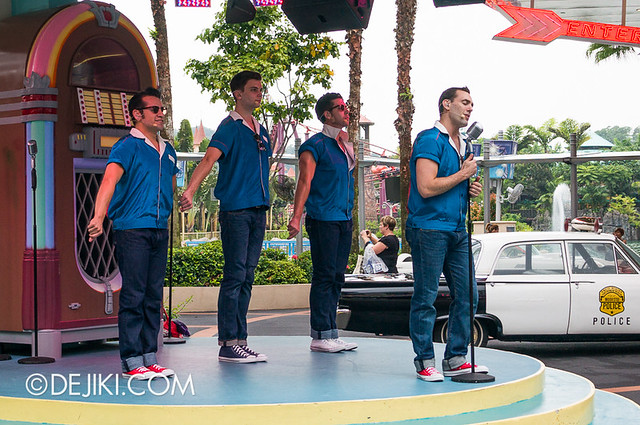 The Cruisers is a new show that is now performed at the stage right outside Mel’s Drive-In. This show started out sometime in July 2013, alternating with Daddy O’s. While similar to its predecessor, this group’s new look seems more complementary to Mel’s Drive-In (and Mel’s Dinettes) in general. 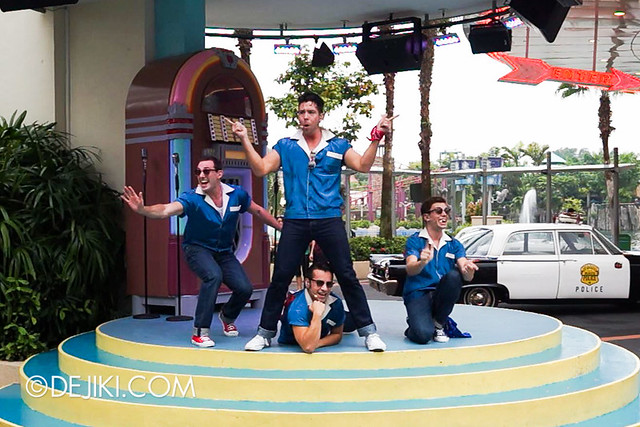 There’s also a minor outfit change at the beginning as the group continues into Uptown Girl – the Cruisers take off their jackets to reveal their blue uniforms, which has the Mel’s Drive-In logo. 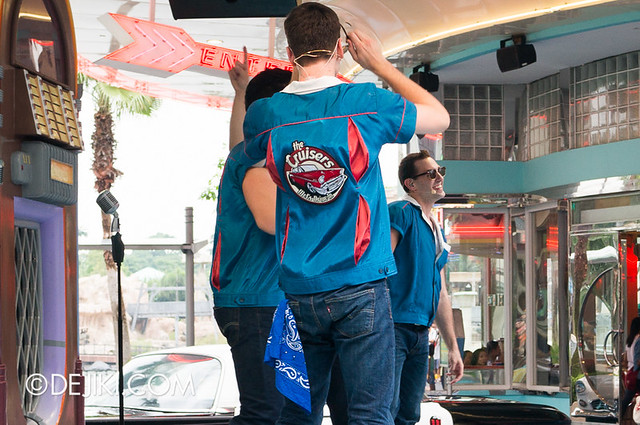 Here’s a clip of one of The Cruisers’ performances: “And I Saw Her Standing There” (The Beatles). Notably, this is performed by a new cast. Some of park’s cast members have left the park recently after their contracts were up, so you might see some new performers in the park’s other live shows. Also, it looks like the performers are now taking up more roles around the park than before.

Universal Studios Singapore’s Hollywood Dreams Parade has recently received a major update of new costumes. The parade soundtrack has also been tweaked slightly. I think some of the dance routines might have been modified as well. I’m not exactly sure because every time I watch the parade, it’s always slightly different – the performers often improvise.

The parade was updated in early September 2013. There were only 4 performances of the updated parade – the show is now on hiatus until November 2013 due to Halloween Horror Nights 3. 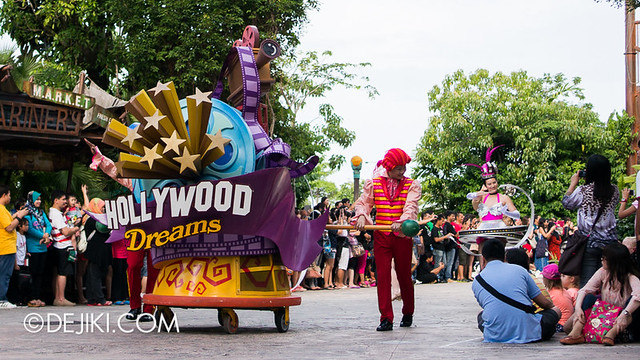 Head over to Hollywood Dreams Parade – a new look, a special feature with a lot of photos of the updated parade. I’ll leave you readers to decide if the new costumes are better. I feel that there are certainly improvements and nice changes, but also some bizarre choices (see above).

Thanks to everyone who wrote in about the parade!

Photos Around The Park 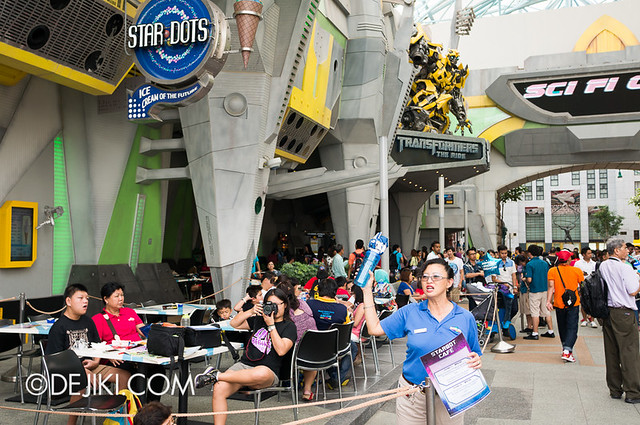 Two areas along the Hollywood Dreams Parade route have been cordoned off as special viewing areas. The one at K.T’s Grill has been there for a while now, but Sci-Fi City has also jumped on the bandwagon. To get a seat at these viewing areas, you’ll have to purchase special meals/drinks combo. For Sci-Fi City’s Starbot Cafe: 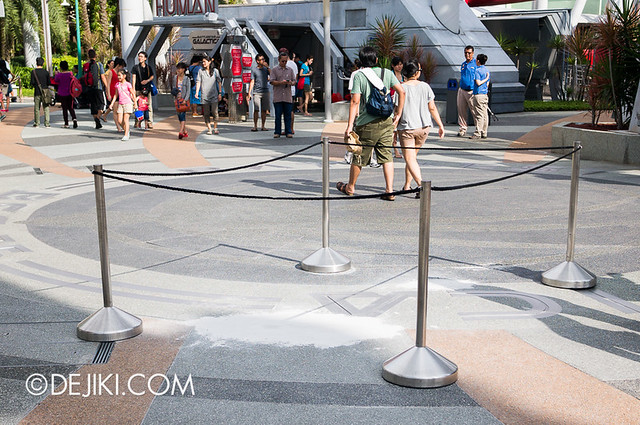 Floor repairs at Sci-Fi. Every few months or so, random sections of the concrete floor would bulge and crack again. 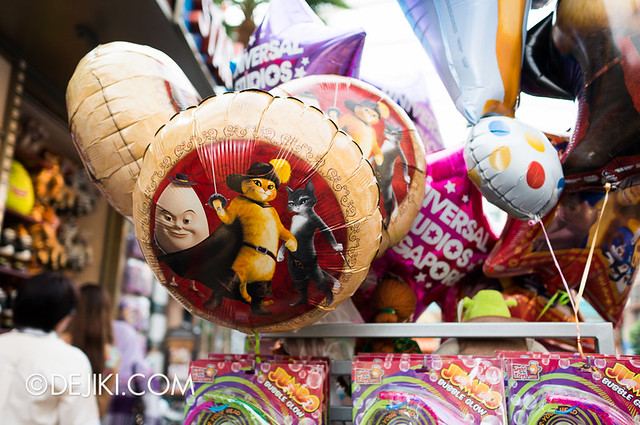 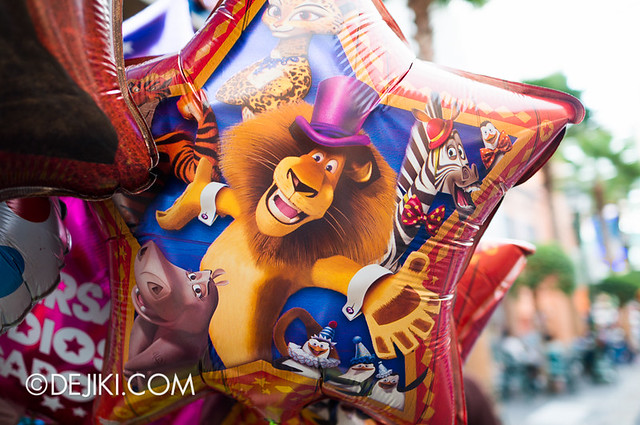 New Balloons in the park, starring characters from Madagascar and Far Far Away.

There are two new Press-A-Penny Machines that I have not featured yet. One of them is at the It’s a Wrap store outside the park. A machine has already been there for months, but the designs have been updated a few months ago. 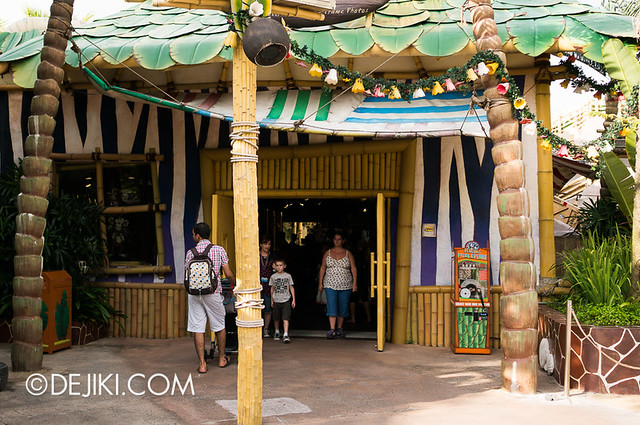 The other is located outside Penguin Mercantile at Madagascar. (Thanks to Keira for notifying!) 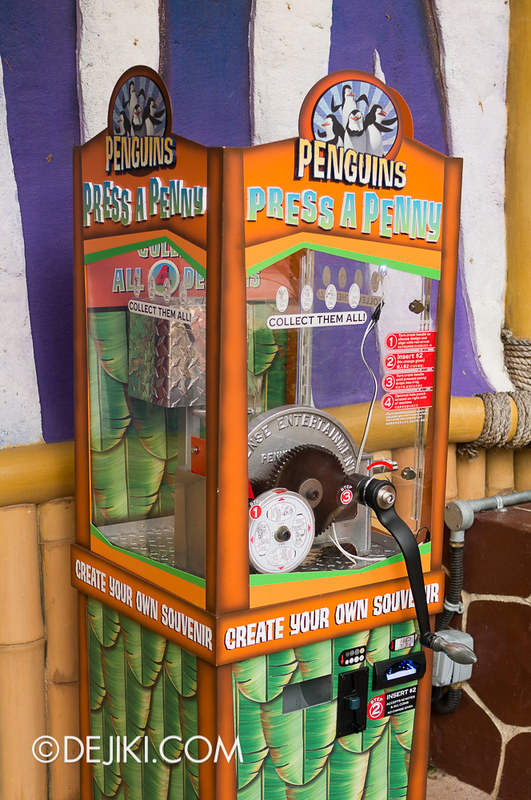 This leaves Ancient Egypt and Hollywood (if you don’t count the ones outside the park) as the only areas in the park that do not have Press-A-Penny machines.

The Guide to Press-A-Penny at Universal Studios Singapore will be updated soon with photos of the new coins. 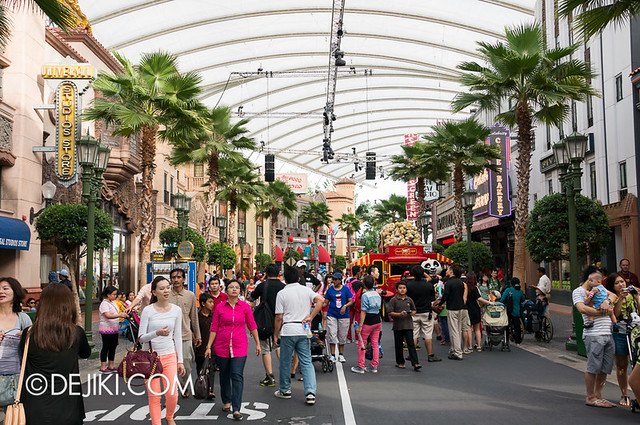 Be sure to check out the Hollywood Dreams Parade – a new look feature!