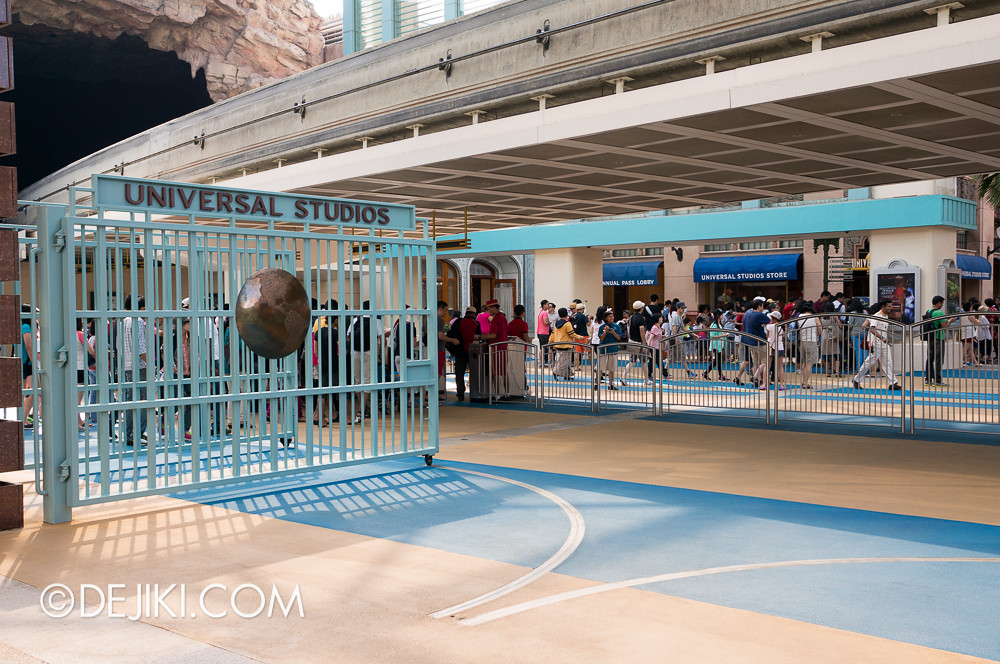 We’re back with the August 2013 issue of the monthly Universal Studios Singapore Park Update. 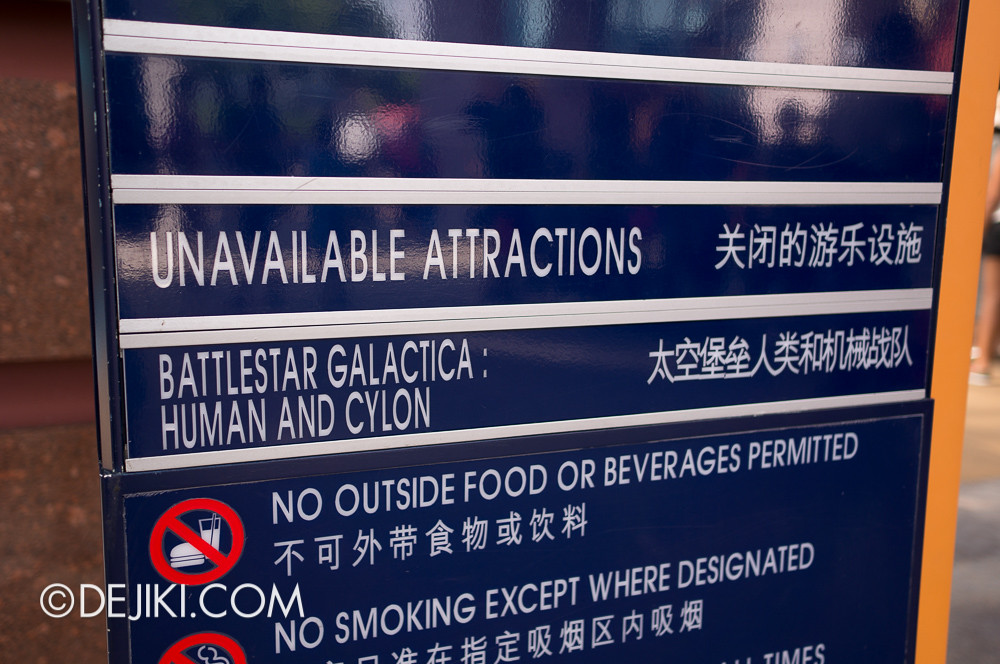 Battlestar Galactica: Human vs Cylon is still closed. It’s almost a month now, with no formal announcement or statement from the park. Park staff were unable to comment on a reopening timeline for both attractions. 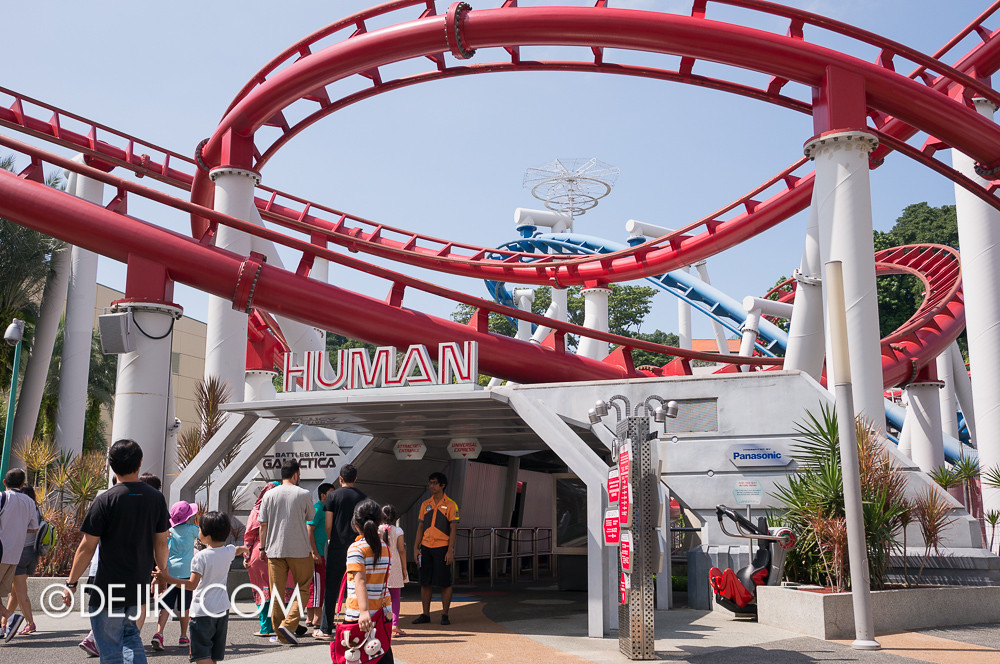 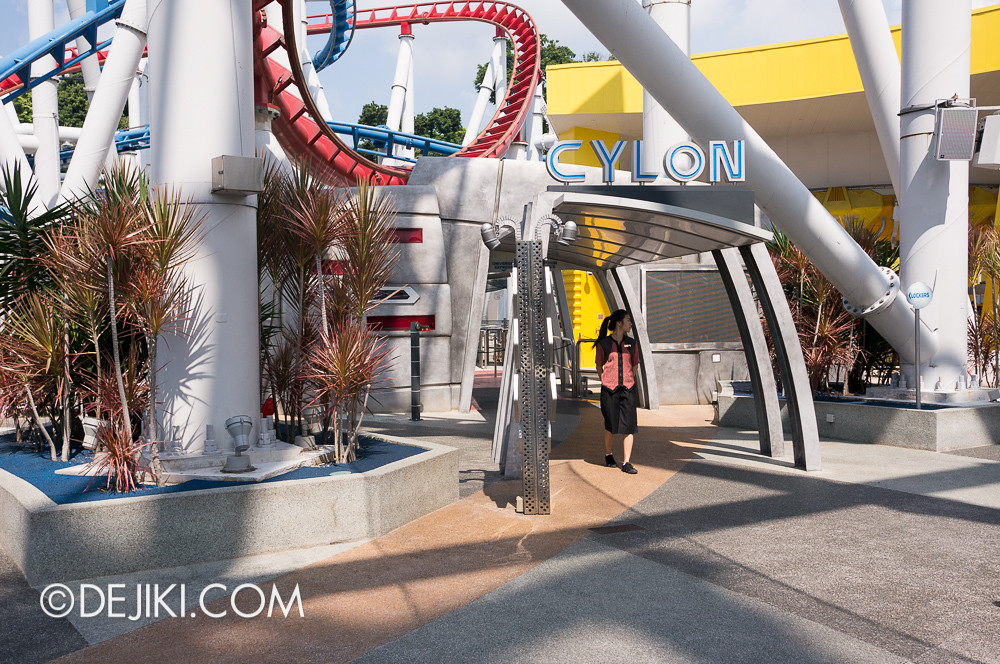 The crew members stationed at the ride entrance probably have the most arduous jobs of repeatedly telling guests all day that both rollercoasters are unavailable.

Since late July, work for the new attraction (due to open in 2014) has commenced. The area has been blocked off with these themed walls. 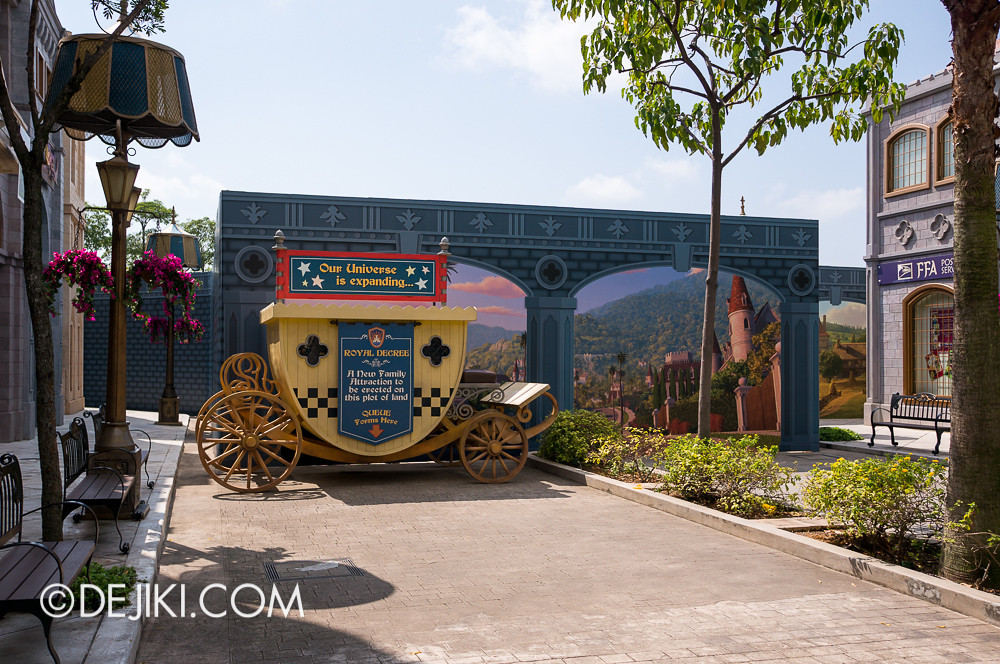 Back in May 2013, I speculated that the new ride back may be based on a DreamWorks Animation IP (since that stretch of the park is “DreamWorks-land”) – although I have a feeling something cute and yellow might take over the area for themselves. Some theme park fansites are saying that it’s going to be a Kung Fu Panda attraction, which is a DreamWorks Animation production. The park has yet to announce anything, so there’s hope for a miracle.

I’m personally wishing it’ll be instead a small London area with King’s Cross Station and a train ride to bring guests to an entirely magical world out of the current park boundaries, but we all know that’s not going to happen. Maybe in an alternate universe.

The old castle walls at Far Far Away have been demolished. Its just a flattened area now with heavy machinery. At the moment, the entire area (approximately) marked out in this aerial image is being prepared for this new attraction and of course, the themed area surrounding it. 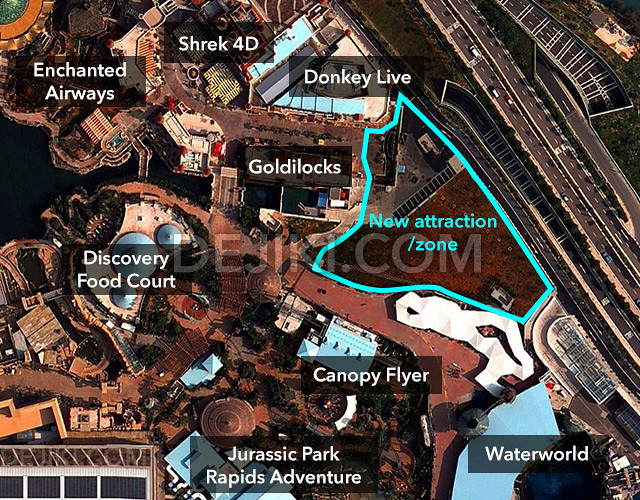 You might want to know that a Kung Fu Panda themed area already exists at Dreamworld in Australia, complete with a thrilling aerial carousel ride called Pandamonium. Not the most exciting thing to have at USS, plus I think most people are over Kung Fu Panda. 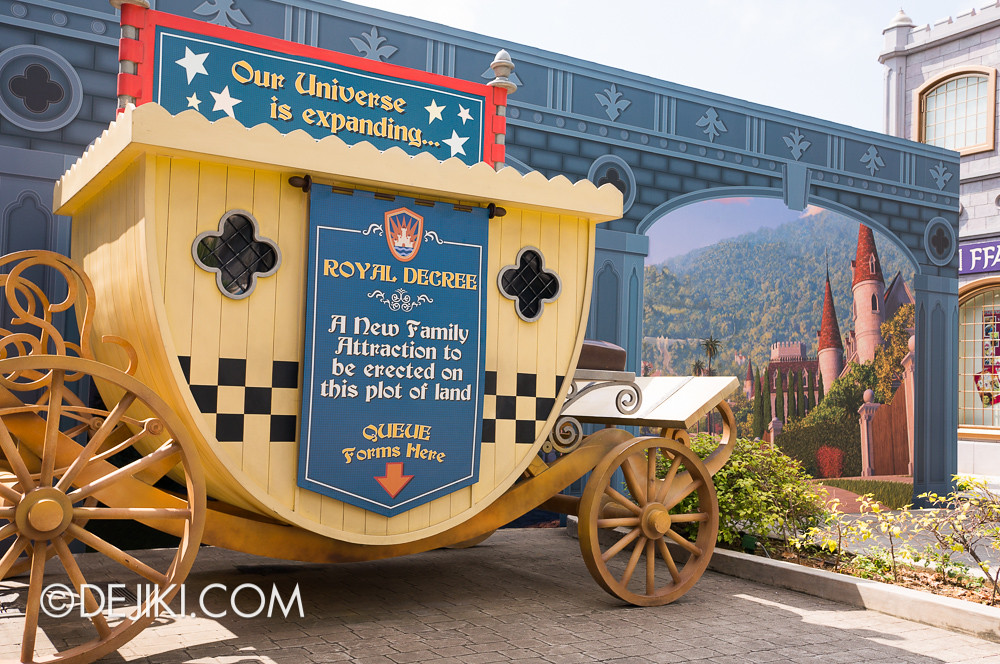 While Kung Fu Panda would fit nicely with the other Dreamworks lands (and the character is already in the park for meet and greet), is it the best thing the park can build? While I’m not crazy about the Minions from Despicable Me, it seems that they’re as popular as Hello Kitty in the region. I would say that Despicable Me: Minion Mayhem would be the most feasible and commercially-viable addition to the park.

If you could choose, what would you want the park to build here? Kung Fu Panda Land of Awesomeness? Despicable Me: Minion Mayhem? Far Far Away expansion? Springfield? Portkey to Wizarding World? Universal Wonderland / Hello Kitty Town? Please do discuss.

I believe this came out at least two months ago, but I’ll post this to document it with the monthly updates. These are the current designs for the park map and guide. There is a special edition for weekends. The contents inside are very similar – the weekend edition basically reminds guests of the parade in the evening. 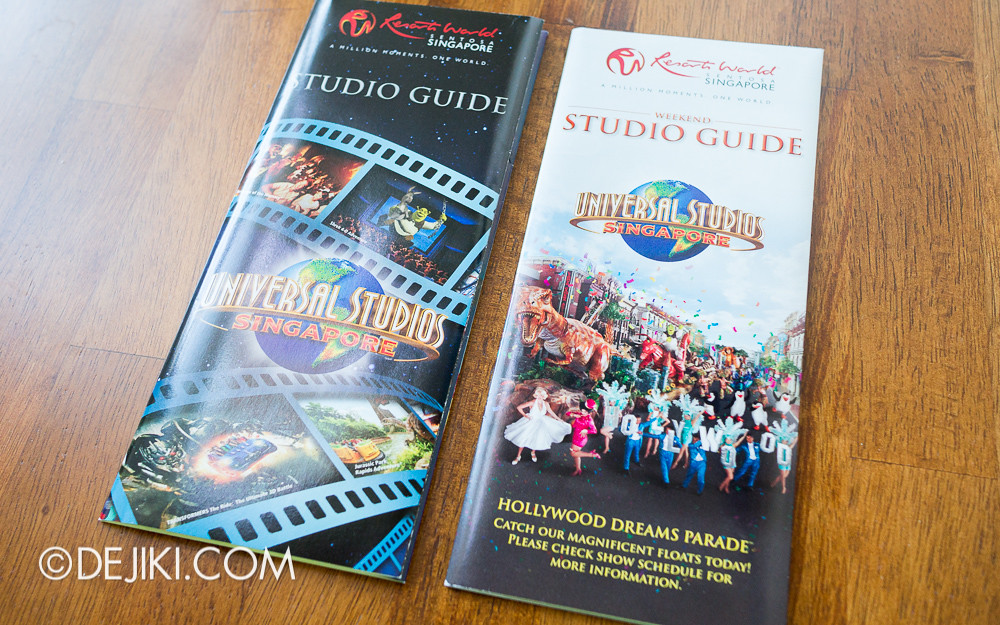 The park maps now mention a Birthday Month Special booklet which is filled with retail and food discount vouchers. If you’ve used it, do let us know what it is about! 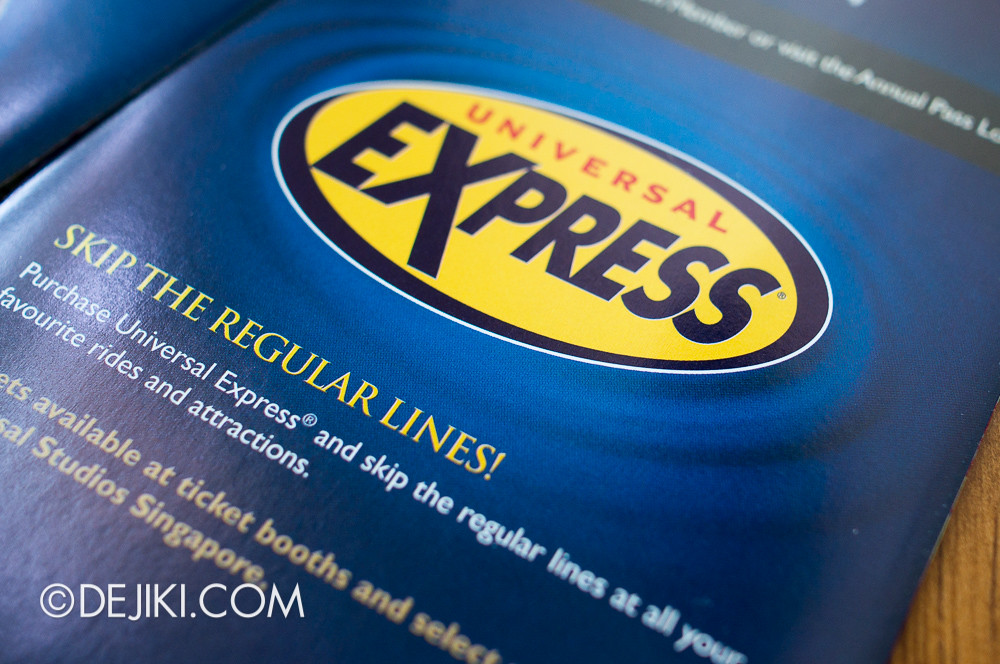 In the past, Universal Express Unlimited Pass was available only at the two parks in Universal Orlando Resort.

Like the multi-park RWS Attractions Pass, this product doesn’t seem to be formally marketed or even announced. There are no signs or posters advertising this product (yet), but it is readily available if you ask. It’s like a queue-skipping speakeasy.

This is the price for Peak Day, when the normal express passes go for $50. I am not sure if there is a different price for Off-Peak Days.

Valid for an entire day, the Universal Express Unlimited access is tagged to a temper-proof paper wristband. Unlike the usual Express Pass, where you can pass unused tickets to anyone, the unlimited option is non-transferable and would be void if the wristband is torn.

Is anyone else also concerned that the park is trying this option? Universal Express has always seemed like a system without sound science (unlike Disney’s Fastpass). At times, it has caused “queue meltdowns”. I’m sure some of us will still remember the great 3-hour wait for attractions during Halloween Horror Nights last year; and the turbulent period during the first months of Transformers: The Ride. If HHN2 proved anything, it is that many guests are willing to submit and buy Express passes if the Express line is the line that’s actually moving. And that will significantly increase the cost of visiting the park for a lot of people. Oh well.

A similar option will be available during Halloween Horror Nights 3, so do brace yourself for potentially crowded and hectic nights as last year. Even the park staff has warned me that park management expects last year’s insane wait times to return. 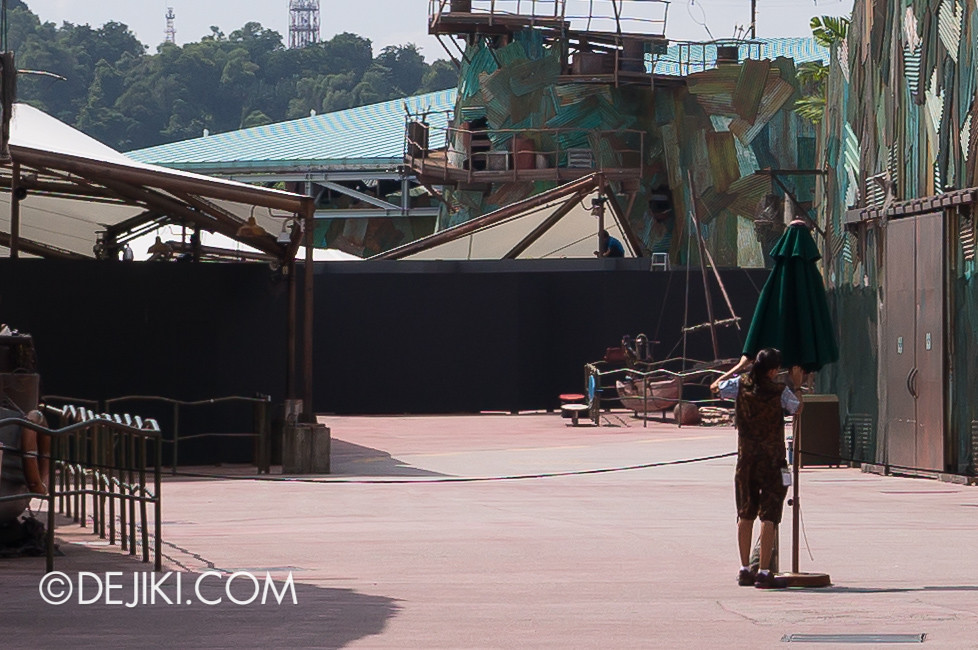 Construction has commenced for the haunted houses – black walls and tents are coming up. Nothing much to say now since it’s still 2 months away. 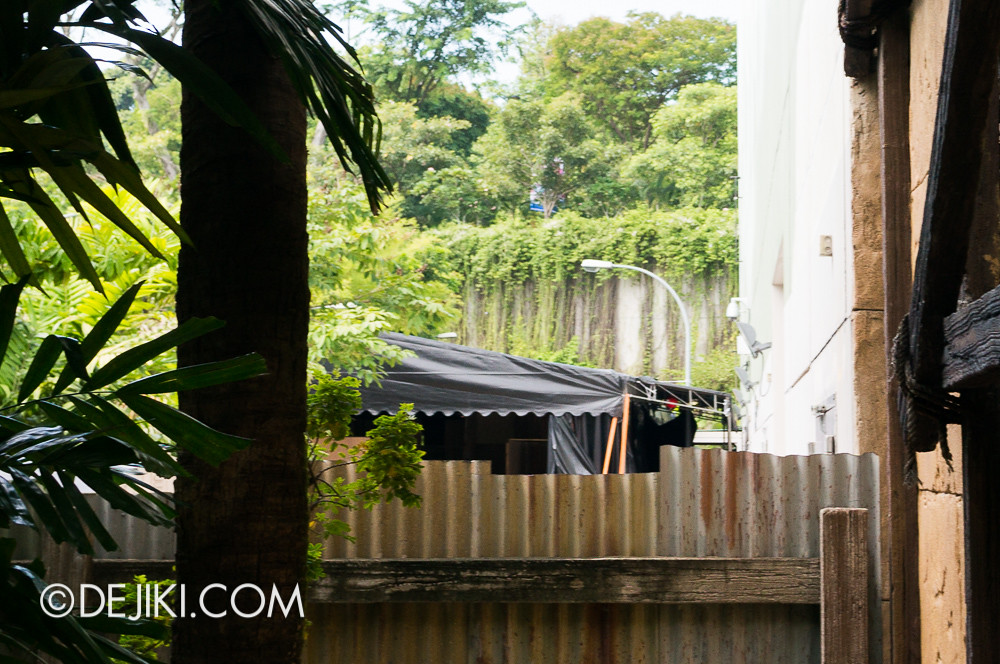 For the first time, one of the haunted houses (Songs of Death) this year will be located at a backstage area between the queue building for Jurassic Park Rapids Adventure and show building for Revenge of the Mummy. 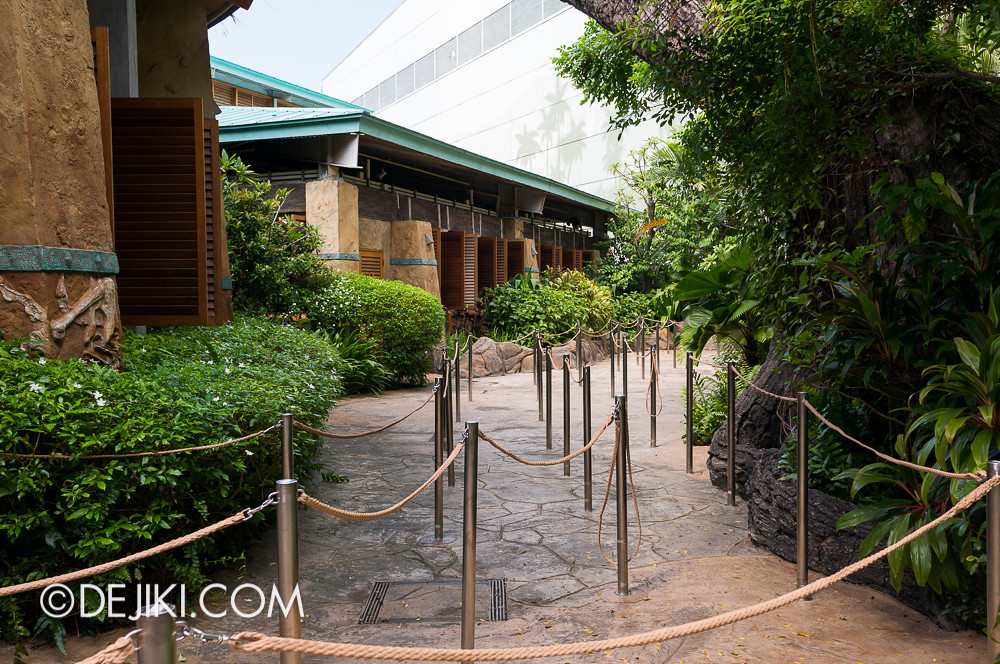 The outdoor queue switchbacks for Rapids Adventure have returned for a while now. 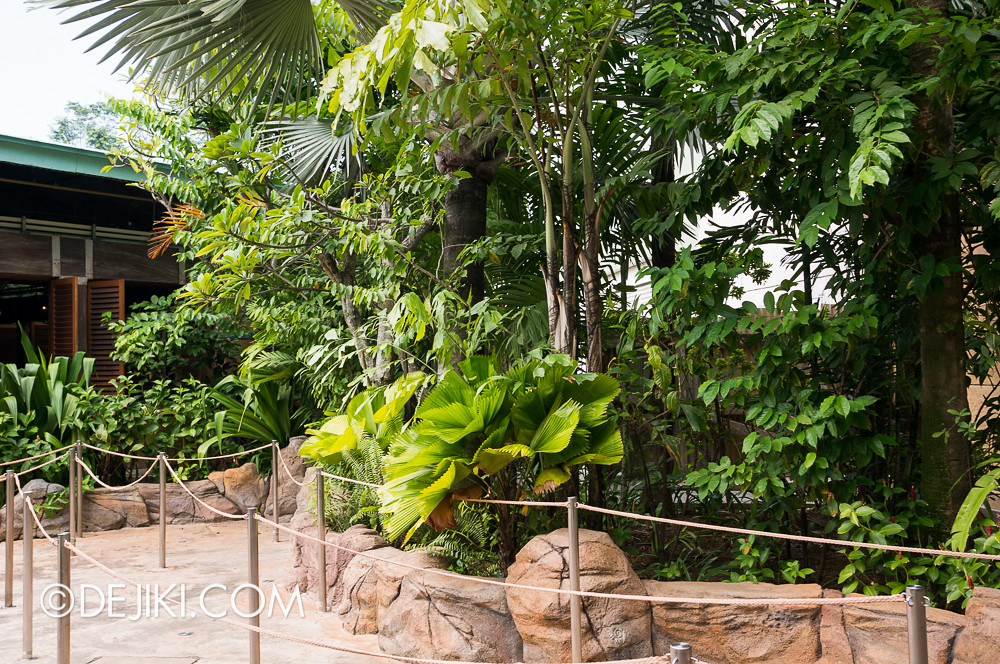 It is very likely that the queue building for Jurassic Park Rapids Adventure would be used to hold the main queue for the haunted house starring the Maiden of the Opera, Songs of Death, which is also aptly titled in Chinese, 《音魂不散》. 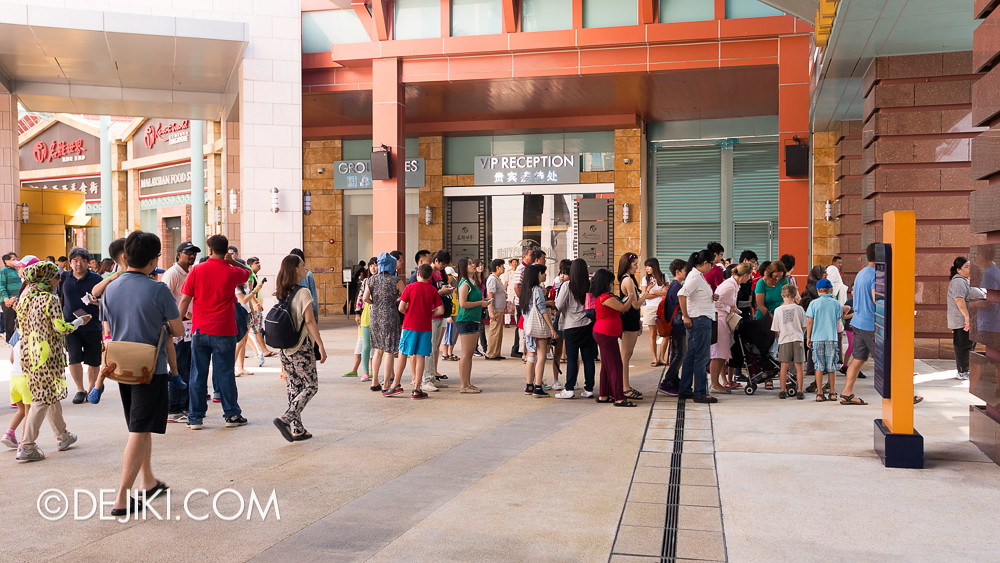 The park was very crowded for a weekday. At the entrance, some lines to enter the park went as far as the Universal Globe. 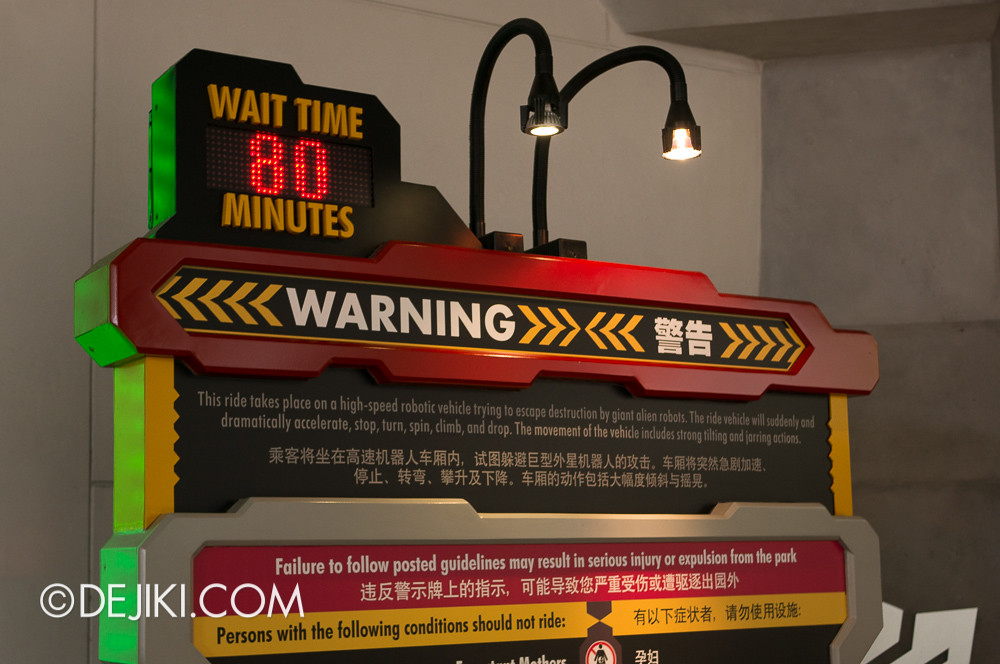 Transformers had a 80 minute wait time less than an hour after park opening. This usually happens only on public holidays or school vacation. 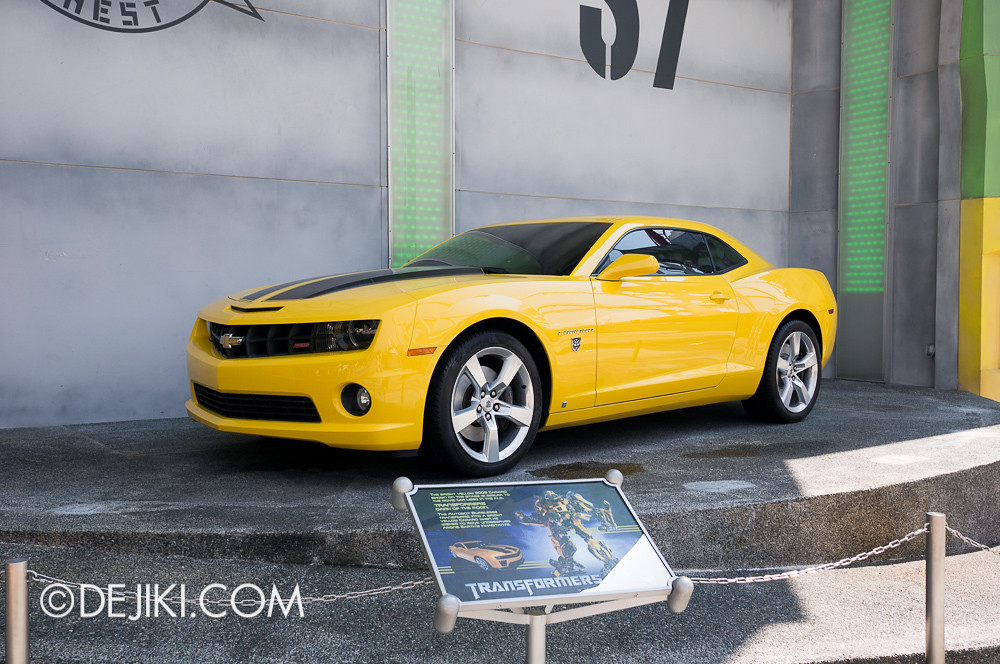 Over at the Chevrolet Camaro / Bumblebee, a new sign has been added: 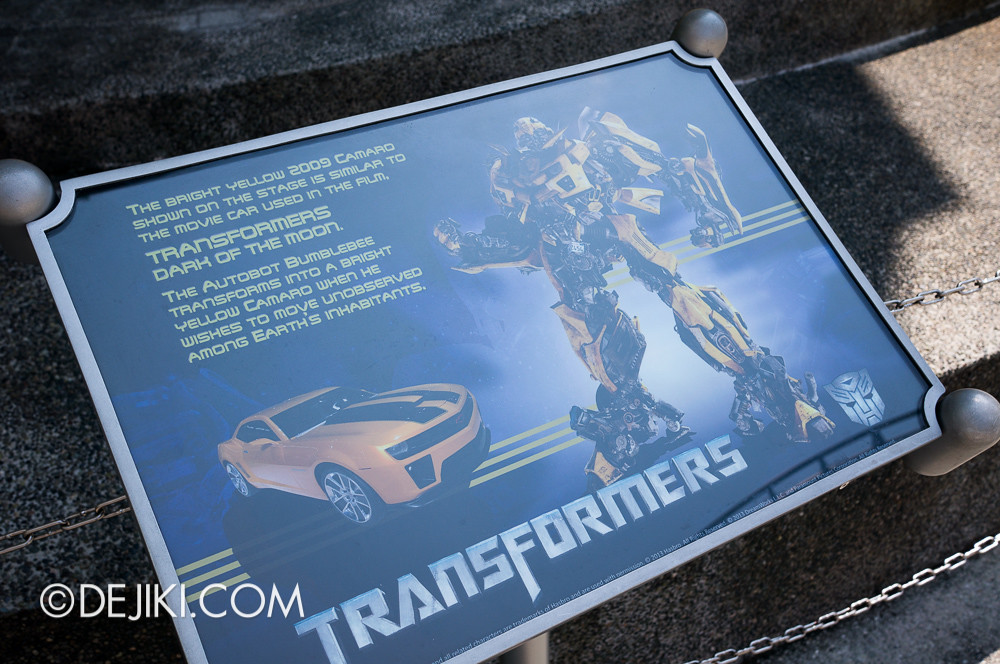 The nearby EVAC does not have a similar sign, however. 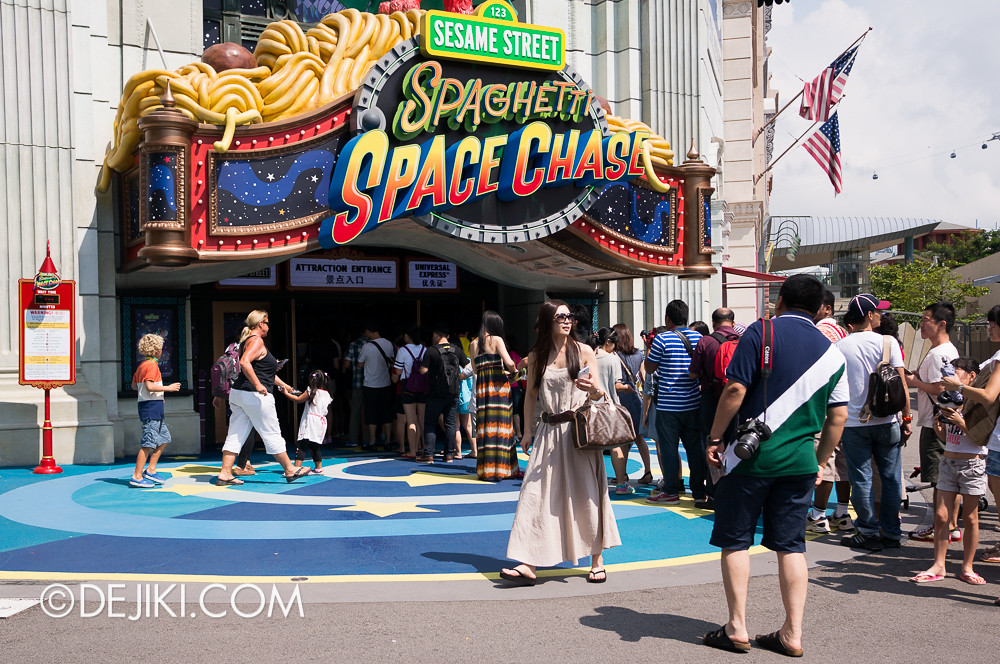 There’s good business at Sesame Street Spaghetti Space Chase. It’s been a long time since I saw the line starting as far as from Hollywood. 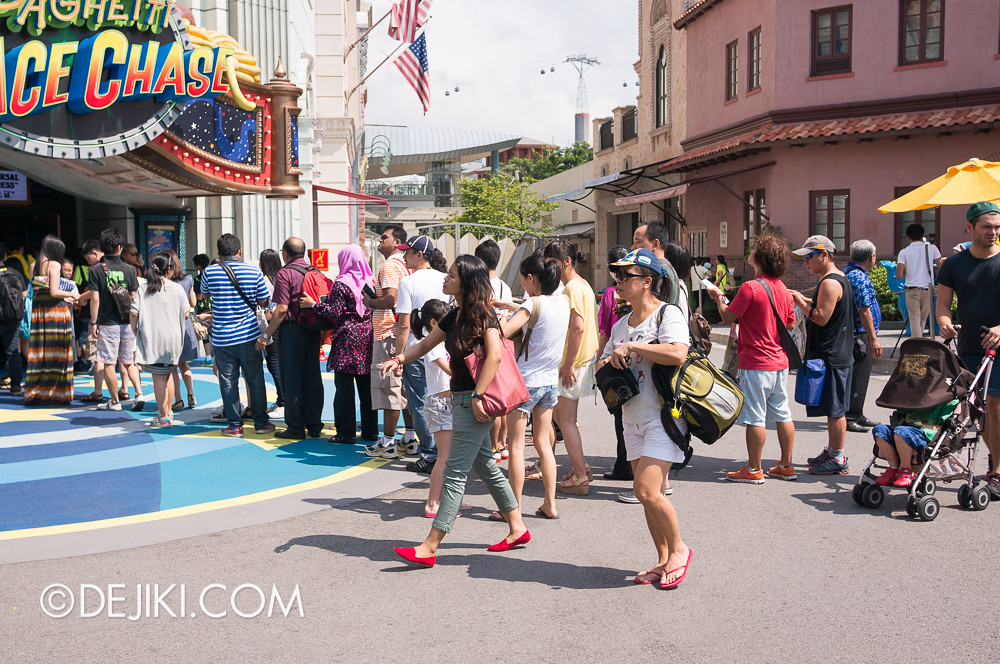 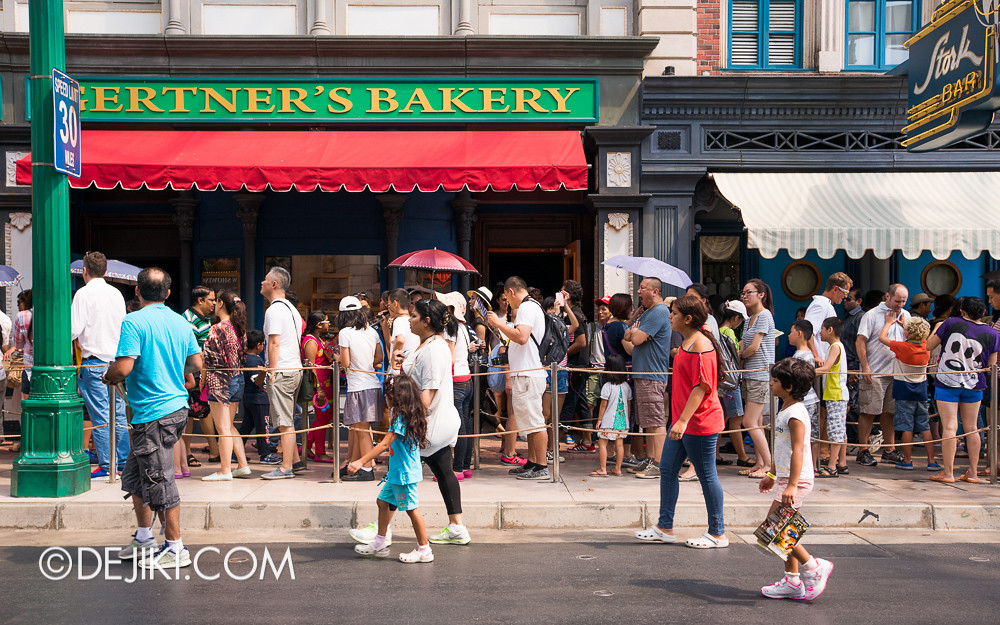 And that’s with all the sidewalk queue switchbacks filled up too.

While I end this month’s park update, I would like to thank the readers who have sent in tips, photos and updates. I’m always happy to receive news and opinions from you, so if you would like to contribute to the monthly park updates, just contact me either via a message on Facebook or the email form here. Subscribe to Dejiki.com or Like my Facebook page for notifications of updates.