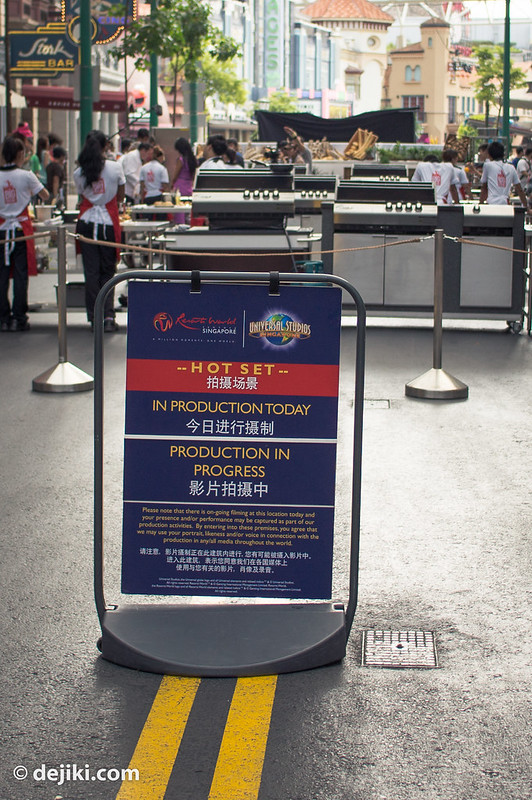 The park is usually less crowded after the busy June period. Although there are new major attractions lined up until Halloween Horror Nights in October, it’s a nice period to visit the park in the coming months, with reasonable wait-times for the park’s popular attractions.

Filming at the Park 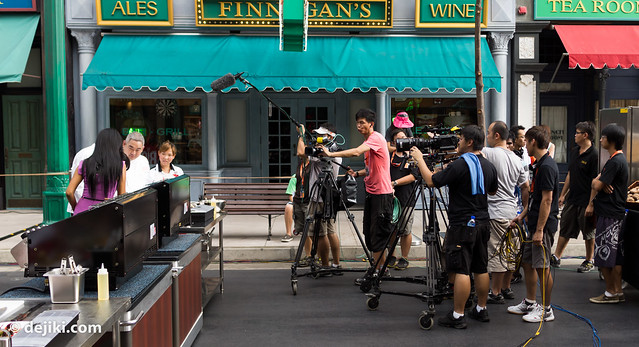 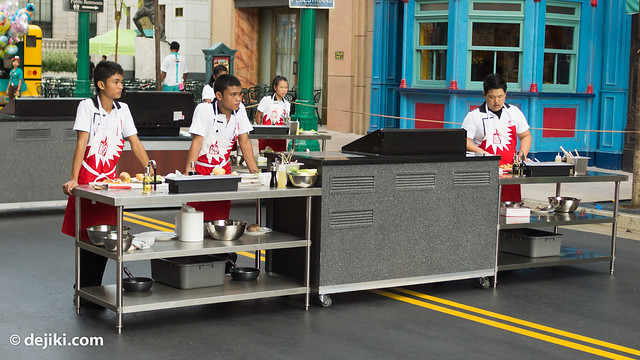 Please note that there is on-going filming today and your presence and/or performance may be captured as part of our production activities. By entering into these premises, you agree that we may use your portrait, likeness and/or voice in connection with the production in any/all media throughout the world. 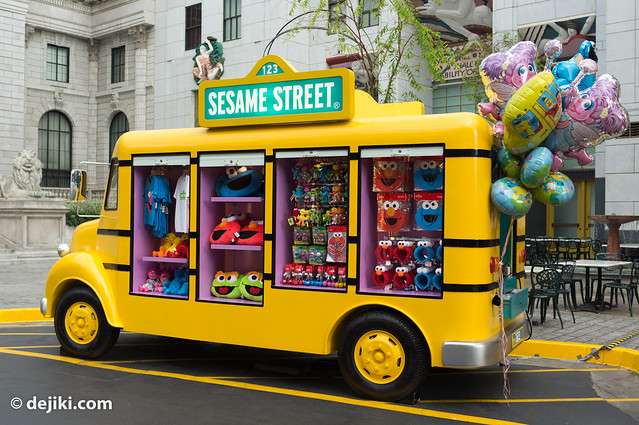 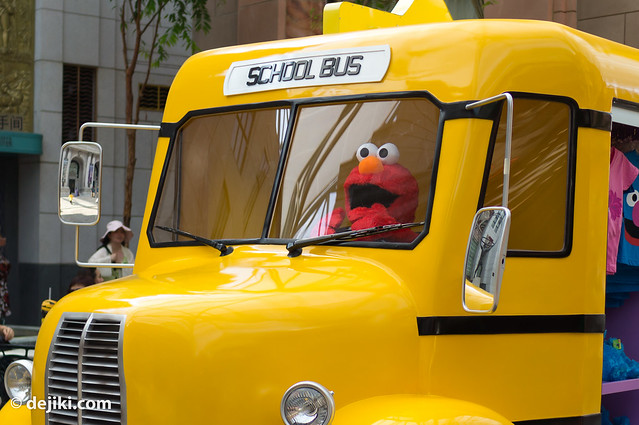 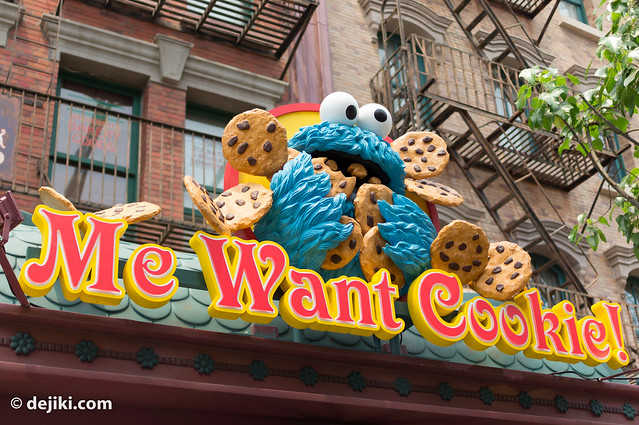 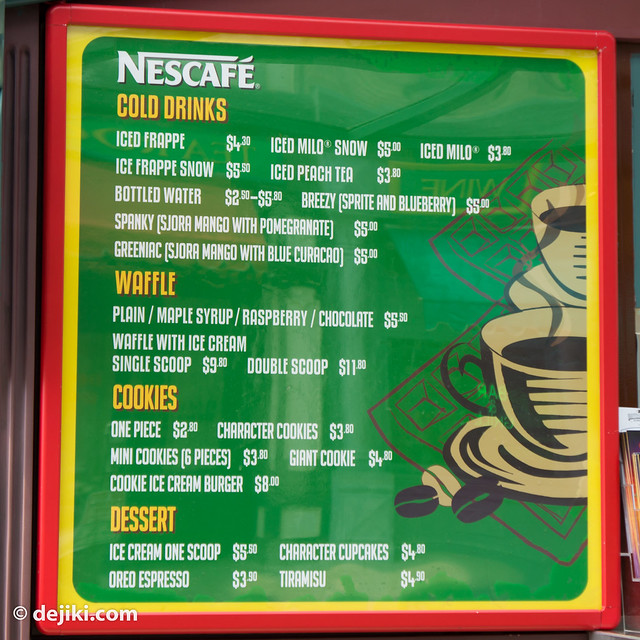 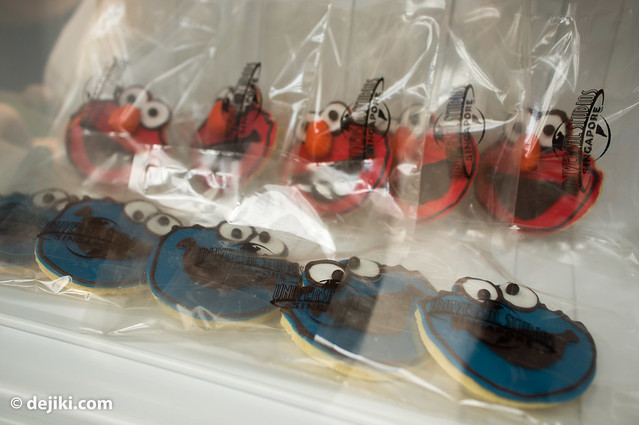 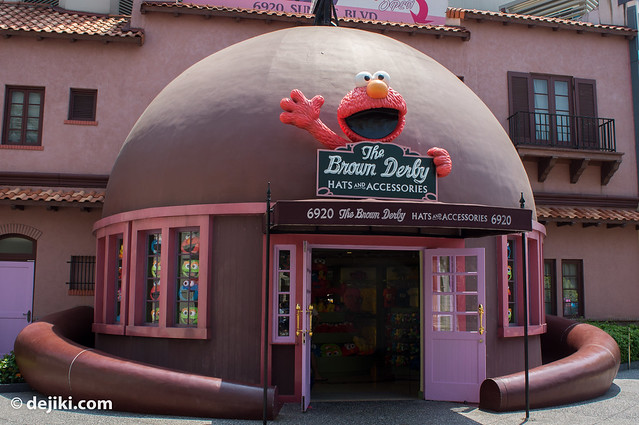 The Brown Derby has been Elmo-fied. 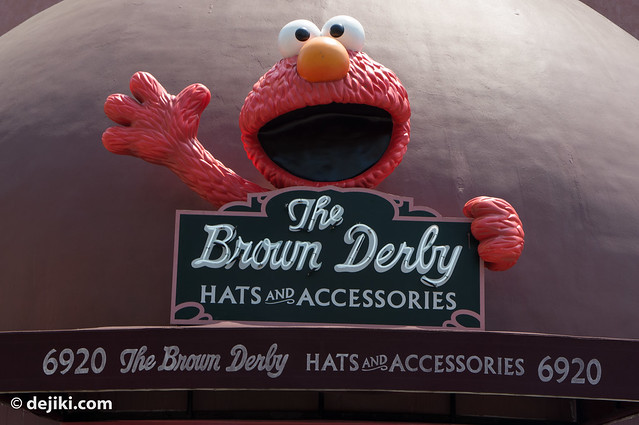 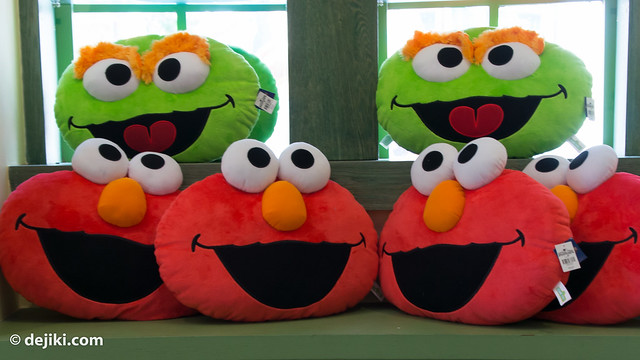 New Sesame Street merchandise at the store are these cushions (which the park appears to offer at many other themed zones). Not pictured here: The blue cushions (Cookie Monster). 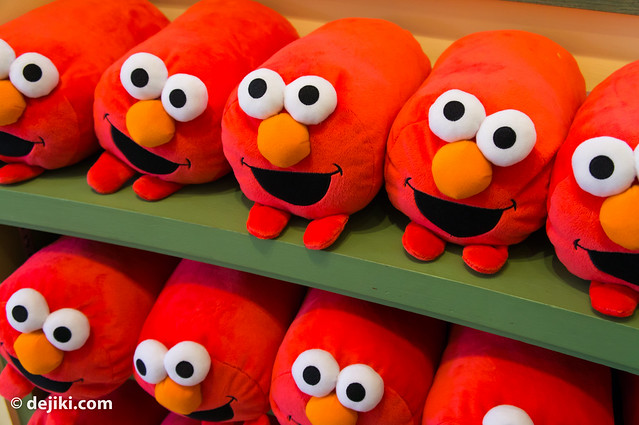 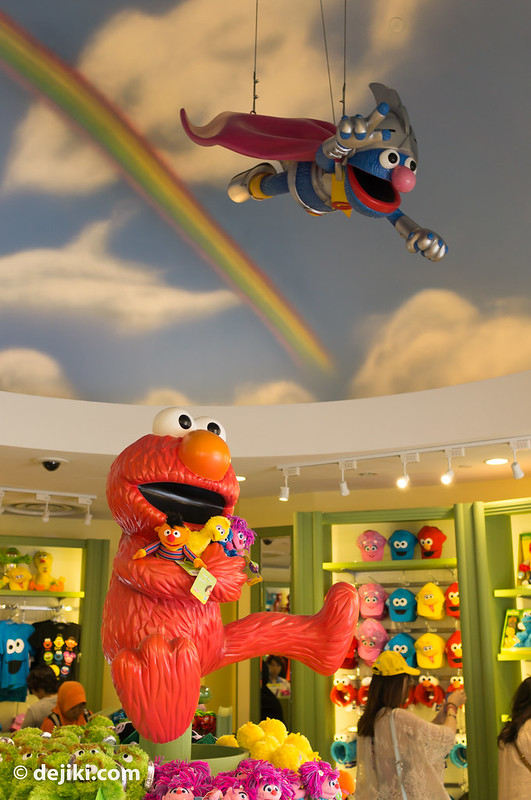 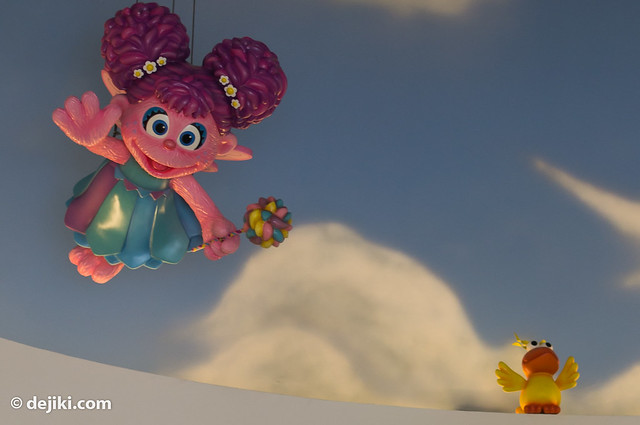 The store’s ceiling decor was completed in late June.

EVAC toys are finally available at the Transformers Supply Vault: 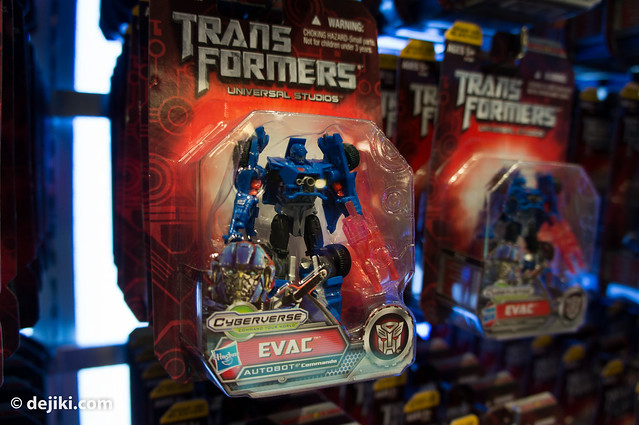 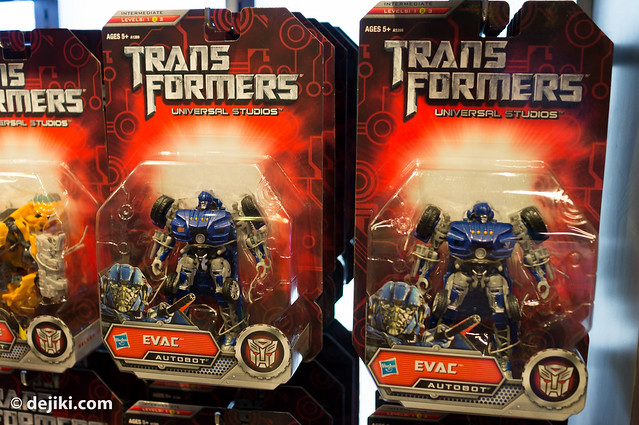 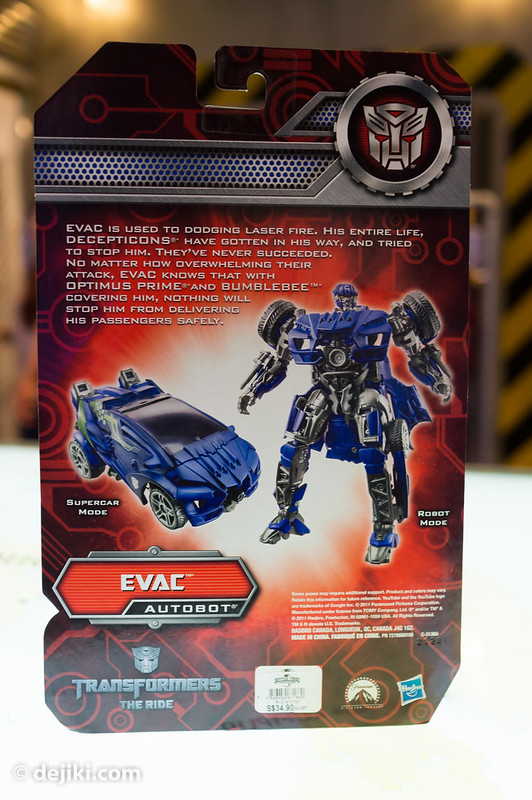 Here’s the back view of the packaging, as well as the Ride Vehicle SuperCar Mode. 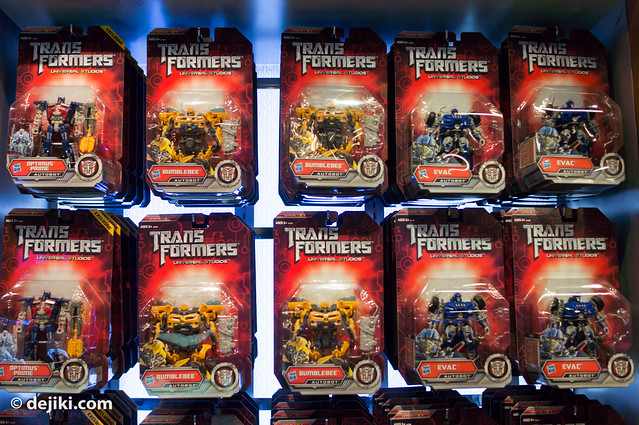 The $34.90 EVAC is part of a new Universal Studios exclusive collection. Optimus Prime and Bumblebee figurines are also available. 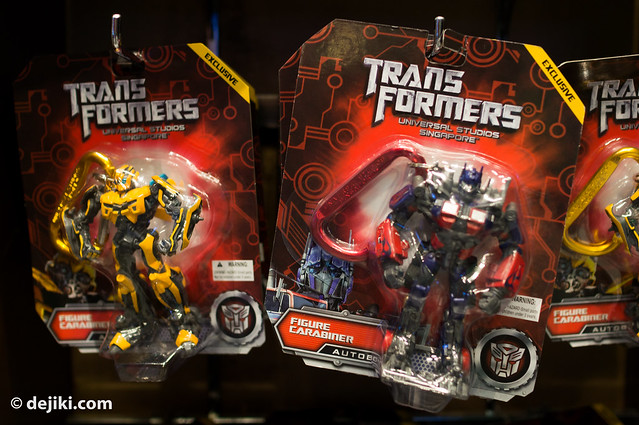 If those toys are too much to handle, consider these Figure Carabiner toys, which are also Universal Studios exclusives. 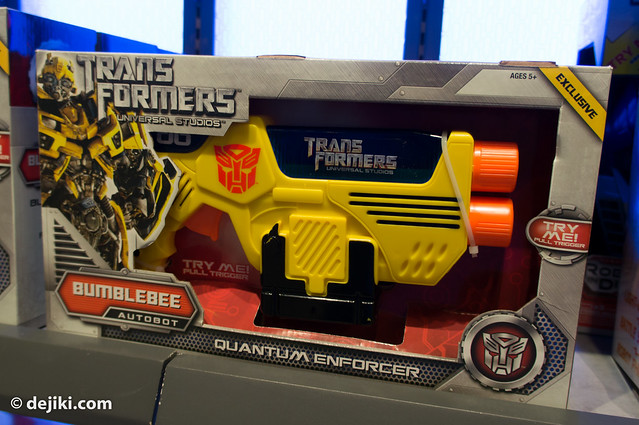 Interestingly, there are also some toy guns at Transformers Supply Vault.

The park also has similar toys at Jurassic Park: 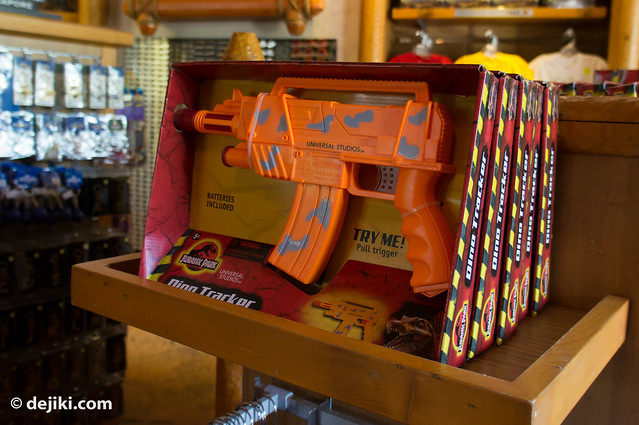 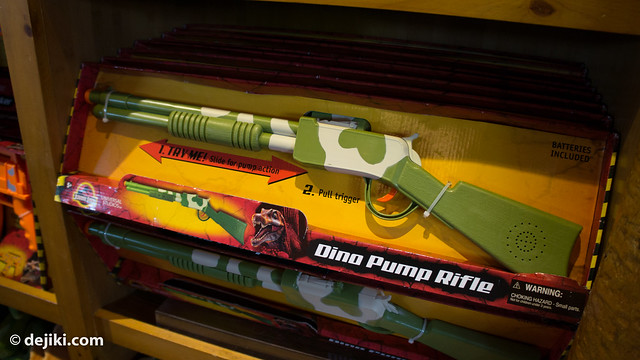 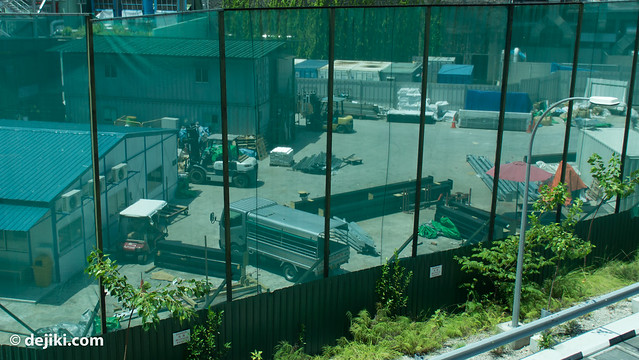 It’s nothing much, but most of the track pieces were removed from the place they were spotted last month. The track design and mounts reassures my assumption last month that it will be an overhead track and suspended ride vehicle system. I’m not sure what these shorter straight pieces are for exactly. Ride vehicle storage/maintenance area, or some parallel track switches, perhaps? 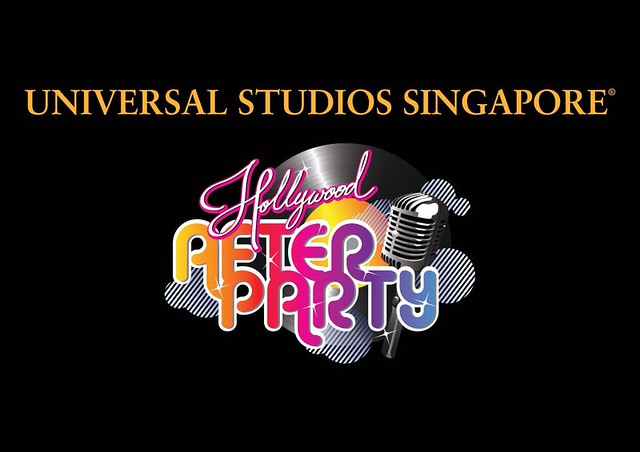 For Add-ons, what you are purchasing are non-transferable, tamper-proof wristbands which will be checked at each food/drinks cart.

Hollywood After Hours at Universal Studios Singapore – A Brief History

In May 2010, the park extended opening hours (from 7:00pm to 9:00pm) at the Hollywood zone, opening the Boulevard for guests to shop and dine on Friday and Saturday nights. No attractions were available during these extended hours. After Hours Admission was $2 per guest. Day Pass guests and Annual Passholders do not need to pay for admission.

After Hours was further developed in June 2010, with Thursday and Sunday nights added to After Hours. It was also extended by an additional hour to 10:00pm. Movie Nights became the first attraction, with screenings of Dreamworks Animation films at Pantages Hollywood Theatre. After Hours Admission was still $2 per guest, while Movie Nights is a $3 add-on per guest.

There were several changes in July 2010. After Hours will only be offered on Friday and Saturday nights. Admission has been bumped up to $5 per guest, but with an additional attraction, Lake Hollywood Spectacular, the park’s fireworks show, at 10:00pm. Admission ticket stubs can be used for 15% discount at the park’s two table-service restaurants and some other restaurants at the resort. Movie Nights continued with different genres of films.

From September 2010, the park discontinued Movie Nights and the timing for Lake Hollywood Spectacular is shifted to 9:30pm.

Over time, more areas were open for After Hours, such as segments of New York and Madagascar. The park settled After Hours from 7:00pm to 10:00pm, charging $5 for admission, with Lake Hollywood Spectacular at 9:00pm. 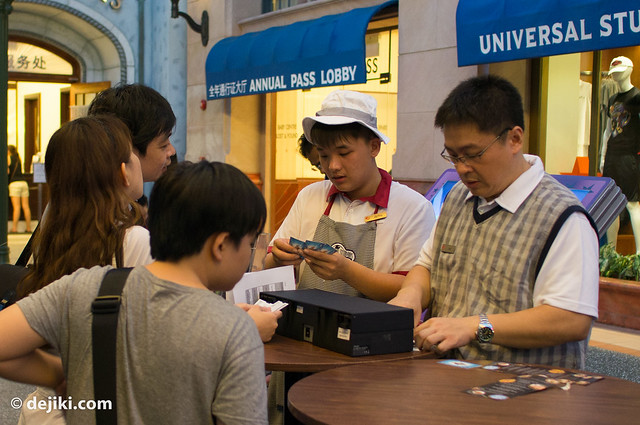 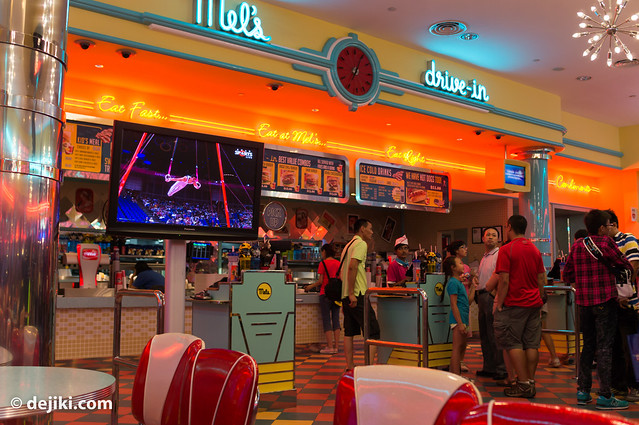 Highlights from the 2012 Olympic Games (which could be replays or live telecast) can be found all around the park’s restaurants, such as Mel’s Drive-In and KT’s Grill. Two large screens have been installed outside Mel’s Drive-In (Lagoon side) and at Hollywood Boulevard (close to the entrance). There’s no actual “schedule” – I’ve only seen the park staff running around just to ensure that the screens are working and showing different events.

Food and Beverage at the Party 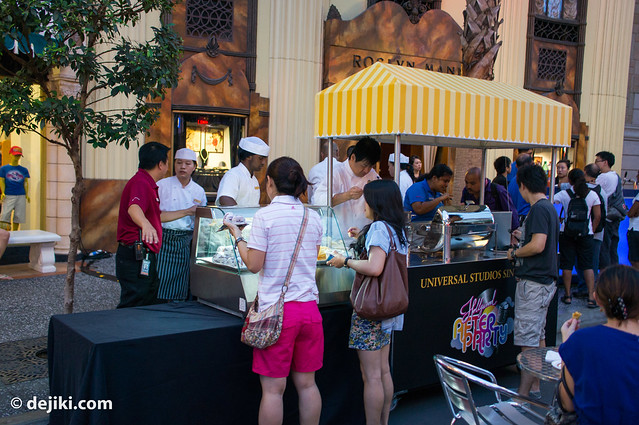 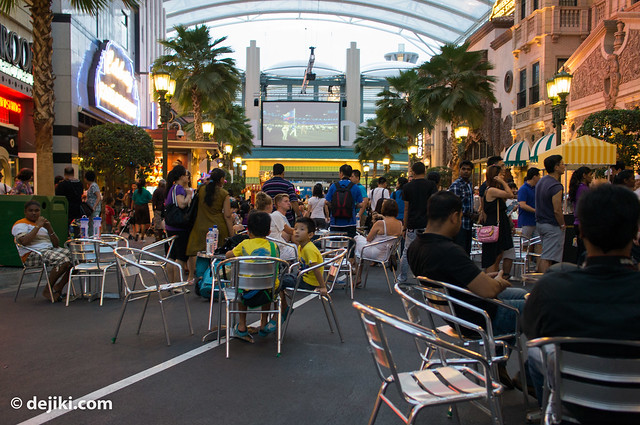 I’ve not actually stayed for Hollywood After Party yet, but it seems like a good deal if the free flow of food and drinks, at a unique themed location, is what you’re after. A complete “All You can Eat and Drink” package will cost $48 per person, or $28 for a Day Pass guest or Annual Passholder.