Finally, Wicked is here at Singapore.

For those who strangely have no idea what I’m talking about, this is a hit Broadway musical that I have never expected to watch in Singapore. I have no idea who first introduced Wicked to me, but over the years, I have collected almost all cast recordings, read the original novel by Gregory Maguire and “watched” some performances with video recordings.

This musical is shows the other side of “The Wizard of Oz”, you know, with Dorothy, Toto and the Yellow Brick Road. The story focuses on Elphaba, the “Wicked” Witch of the West, and Glinda, The Good Witch of the North. As the official description says, “a lot has happened before Dorothy dropped into Oz”.

The main narrative is presented as a flashback, with the citizens of Oz celebrating the demise of Elphaba (killed by a bucket of water, thrown by Dorothy) right at the start, and Glinda speaking about the past. We then go back in time, when the two girls first met each other at Shiz University…

I’ll leave you to find out what happens in the theatre. 😉 Pay good attention the lyrics of the songs, because there is a fair bit of foreshadowing.

One short day in the Emerald City… 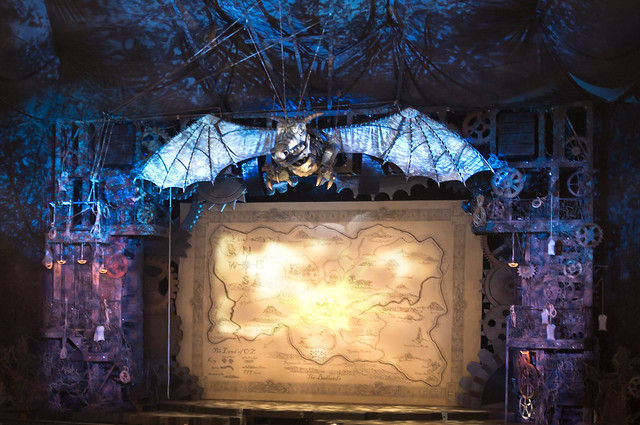 Performing at the Marina Bay Sands Grand Theatre is the touring production of Wicked, featuring the Australian Tour cast. While it is the traveling production, there is no compromise for this production at MBS when it comes to the stage props and installations – the extravagant scene design, moving props (with matching clockwork movement!) and of course, the Time Dragon, which moves during some critical points in the performance. The lighting effects for Ozdust Ball and Emerald City will definitely surprise and enthrall guests. It is a spectacle, so get your emerald glasses ready.

We have here the updated version of Wicked, with the projection effects – No giant hat during the introduction, which was used for the Original Broadway production back in 2003. And possibly because of the way the MBS Grand Theatre is designed, this production omits the trapdoor at the middle of the stage, which is usually used for the traveler to disappear in “Have A Little Drink” and Elphaba to rise for “No Good Deed” – She simply walks to the center holding the Grimmerie.

Here’s my short review of Wicked in Singapore:

Edit: Thanks to Lex, who noted that the Suzie Mathers was unwell last night and the understudy for Glinda, Allyve Martins, performed in her place (6th December 2011).

It was a spellbinding performance. I particularly enjoy the vocals of Jemma Rix and Allyce Martins. While they do not sound like the Original Broadway Cast (which is what almost everyone wants), I find their rendition to be smoother, with that sweet harmony during duets. Don’t get me wrong, Kristen Chenoweth has a VERY powerful voice – she DEFINES Glinda, but she does get shrilly for the high notes. For Rix and Martins, their synergy at “For Good” was magically pleasant.

Jemma Rix is an expert in Wicked and well-known Elphaba around the world, having performed the role for many years and at many countries, including a stint at Universal Studios Japan. Keep your eyes (and ears) open during her spectacular solo, “No Good Deed”.

Allyce Martins has performed last night (and not Suzie Mathers). Although she is the understudy for Glinda, she might have found her true calling. Her antics during the Galinda period were just hilarious and felt genuine. She isn’t mimicing Kristen Chenoweth, but more like being herself during the act. She set the audience crazy during “Popular”, and of course, all her Oz-English moments. “Your Ozness. He means no disrespectation!”

Like I’ve said before, the stage design is extravagant and has a good deal of scene changes. There lights EVERYWHERE on the arches. The famous Time Dragon Clock backdrop and of course, the articulated Dragon prop – it’s all here. The Time Dragon Clock is significant in the original novel but not so much in the musical. To keep it simple, we are watching the show “through” the Time Dragon Clock, which is why we keep seeing the clock and its layers, and all the clockwork. It’s metaphorical, so I’ll leave you to find out what it is.

The only thing that was off: some elements of the music messed up. Either the pre-recorded parts went on rapid loops during playback or the synthesizers went crazy at some points. A little disruptive, but at least it happened only during ensemble numbers and not during the ballads.

Update (03/01/2012): I have watched a performance of Wicked with the role of Glinda performed by Suzie Mathers. She is an amazing Glinda and all I can say is – you must watch her perform on stage!

The merchandise store is located at the entrance of the theatre (right behind the box office) and sells what you would normally see for touring productions of broadway musicals. There is nothing unique for Singapore, since the show is on tour. They have a selection of t-shirts, knit hats, track jackets, towels, a “Green Elixir” metal water bottles, lapel pins, keychains and lanyard. The Chistery plush toy goes for $40. The store is open to public at most times, but is closed to theatre guests only during the intermission.

Most of the items sold at the store can be seen here: http://www.wickedthemusicalstore.com.

Please arrive at the theatre on time, or better, at least 10 minutes early so you find your seats. There were a handful people walking in circles during overture, and it is just annoying to have someone in front of you waddling to their seats – you know how theatre seats have close to no legroom!

The Marina Bay Sands Grand Theatre has a very lax policy on punctuality (unfortunately) which means shows rarely start on time and the doors still remain accessible even when closed. However, once the performance start, the doors will not be open until the next appropriate pause in the performance… which happens to be during Dr. Dillamond’s class.

This means that you would miss: The Overture, “No One Mourns The Wicked”, “Have A Little Drink”, “Dear Old Shiz”, “The Wizard and I”, “What is this Feeling?” – which is practically a third of Act 1.

You think I’m being mean, but there were close to a hundred latecomers streaming into the theatre during that moment. Their lateness is just “unusually and exceedingly peculiar and altogether quite impossible to describe”.

Update (03/01/2012):
The theatre has changed their policy and late-comers will be able to enter the theatre during the speaking parts for “No One Mourns The Wicked”.

For those who are thinking of buying tickets but not sure which seat class to book: I sat at the Stalls (near the back) and had an unobstructed view of the entire stage. My sister commented that it was too far to see the faces of the cast. We also could not see the entire parts of the inner dazzling arches of the set, because the outer-most proscenium arch is quite large and covers some of the inner layers. So… if you wish to see the stage in its entirety – the amazing “Time Dragon Clock” stage completely, and still have a good view of the cast, unfortunately you have to buy the expensive Emerald Class for the best view.

Otherwise, the other seats provide a good view and enjoyable experience. Binoculars/Opera glasses are not necessary unless you REALLY want to see the cast’s faces.

I’ll end this entry with some peeks of the Souvenir Program: 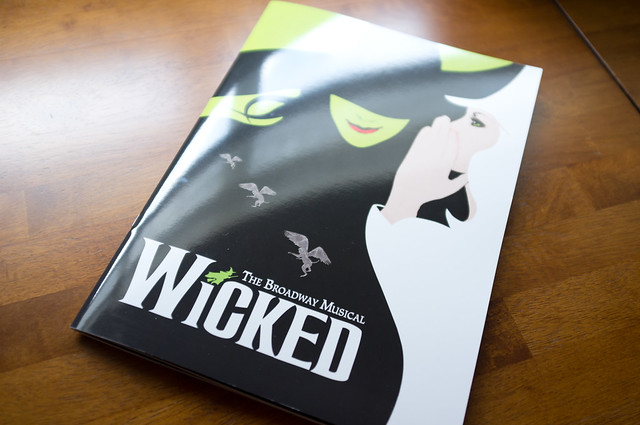 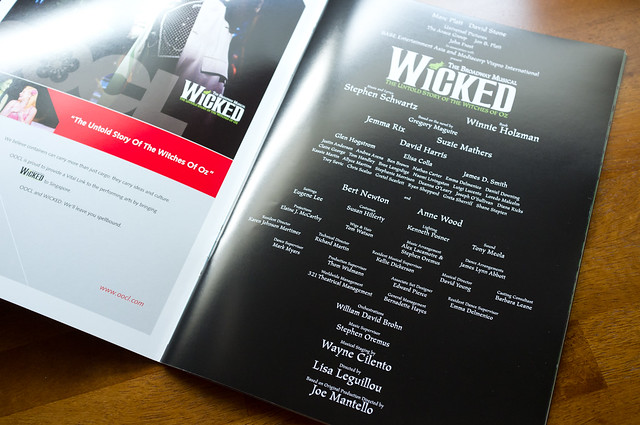 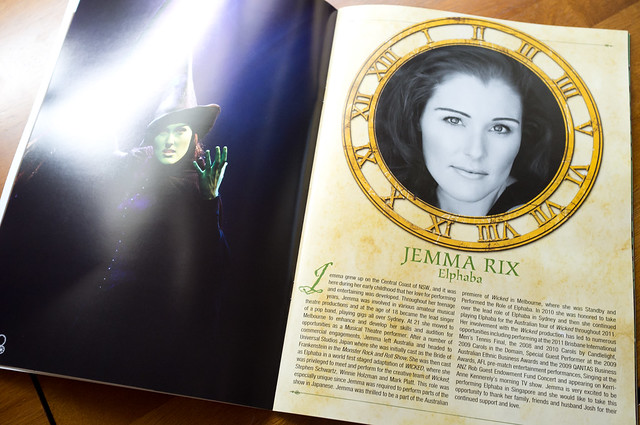 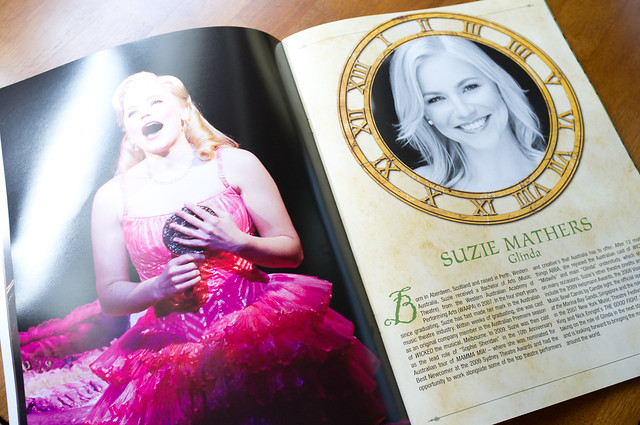 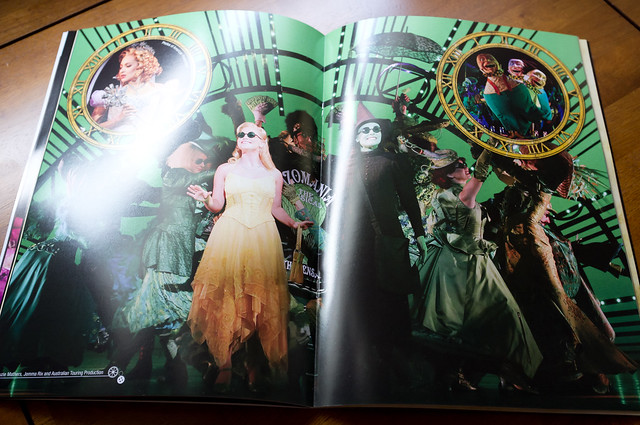 The souvenir program ($20) has a mix of photos of the Australian and American production. So yes, there’s some photos of Idina Menzel and Kristen Chenoweth (the riginal Broadway Elphaba and Glinda) inside.

If you had the slightest intention to watch Wicked, please just go ahead to watch it. You will regret if you don’t. And oh, maybe watch The Wizard of Oz (1939) if you have time – some scenes will make more sense if you know some parts of the plot.

34 Responses to Wicked: The Broadway Musical – in Singapore