I’ll just consolidate the last two days of this trip into one post! 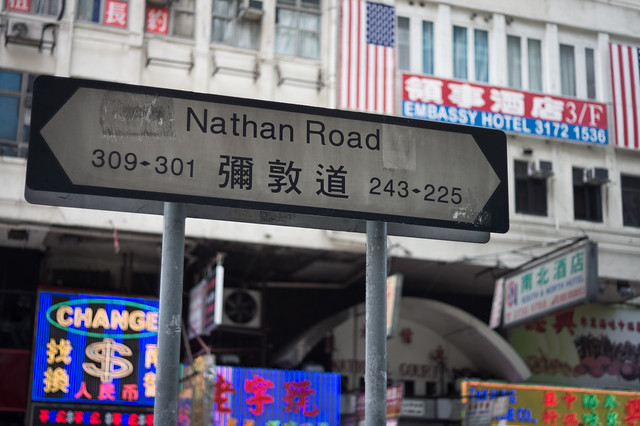 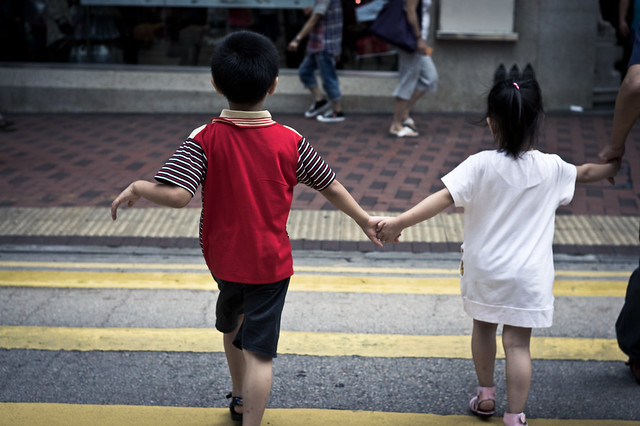 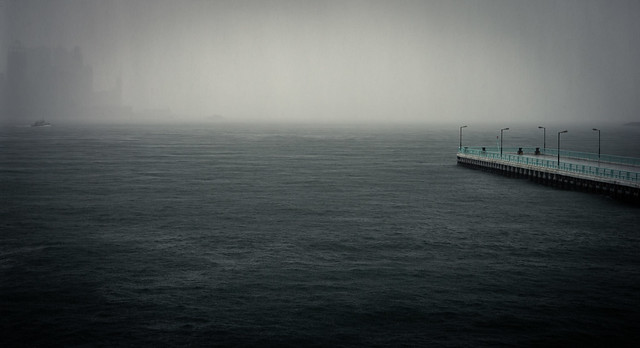 The weather forecast warned us about Level 3 typhoon winds – and it was accurate. It was very comfortable to walk outdoors, but the wind brought about several bouts of unpredictable sweeping rain. Most of the day we were inside shopping malls on the third day.

In Search of the Summicron-M 35mm in Hong Kong
I tried my luck searching for 2nd-hand Leica and Zeiss lenses in Hong Kong, but the only reliable place was some shops at Mody Road in Tsim Sha Tsui. Tin Cheung Camera has a few stores in the area so I visited their newly-relocated store in a mall called K11 – great selection, they have almost every essential lenses BUT the reason why they still have stock? The prices are not exactly great, in fact um – it’s at the level of “I just want it even if it’s $1500 more” sort of price. The second shop I went to was Tin Cheung Camera Classic, a pre-owned photography store. The prices are close to what you see on eBay, but at least you could inspect the lenses and try your luck bargaining. 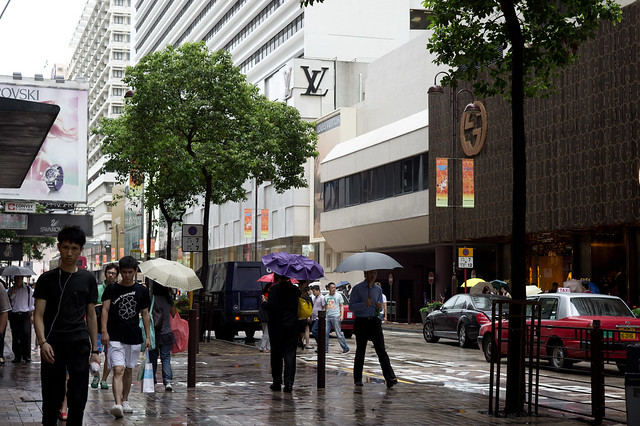 The Southern part of Canton Road is better known for its incredible concentration of European flagship boutiques, but also the Louis Vuitton Maison store – that is easily twice the size of outlet at ION Orchard in Singapore. This entire stretch is linked together and is part of a larger mall called Harbour City. 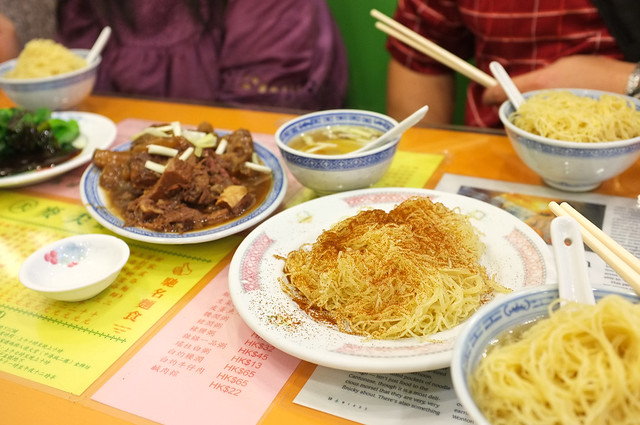 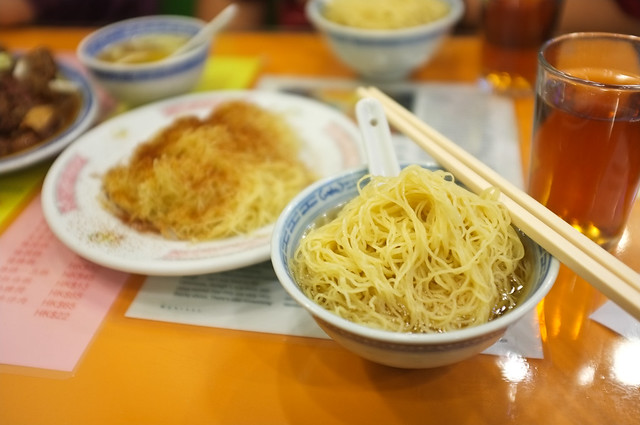 One notable place we had lunch was Mak’s Noodles, located in Causeway Bay. They have a few branches in Hong Kong, so either Google it yourself or contact me for details. The original restaurant is at Central though. Even if you are not a fan of Wanton noodles, you should really try Mak’s! The noodles have a fresh, crunchy texture – coupled with plump, scrumptious wantons that is served with fragrant soup stock in a small soup bowl. You might end up having a few extra servings! 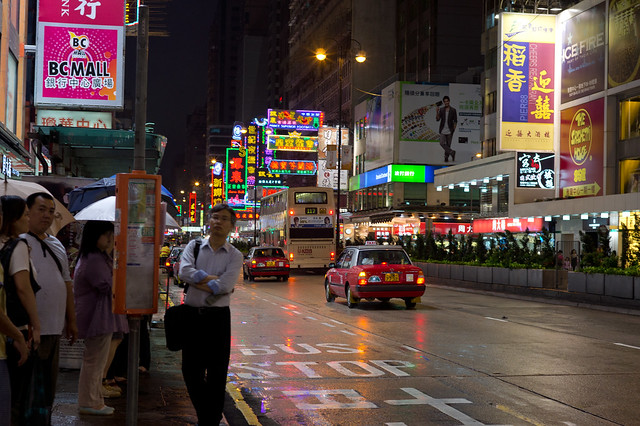 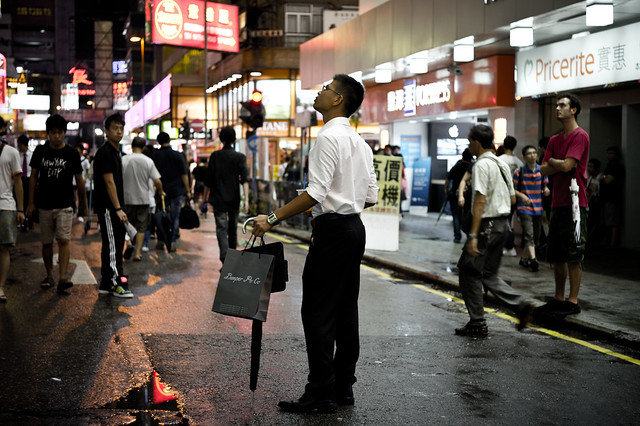 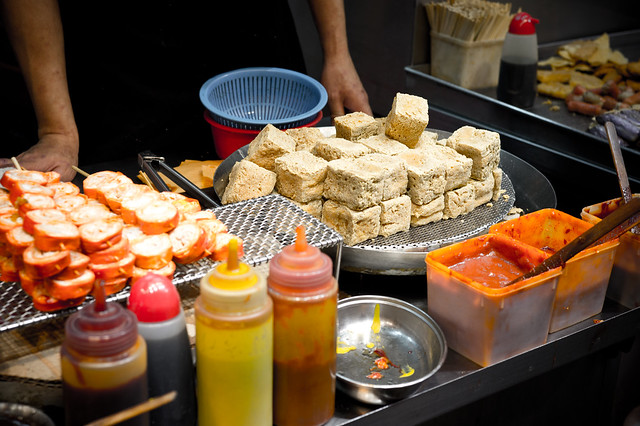 As usual, the streets of Hong Kong at night are more characteristic. Locals roam the streets and shop till very late at night. It is not surprising to see crowded shops even at 11pm – unlike back in Singapore where most shops close at 8pm and even if they are open (like most stores at Marina Bay Sands), it’s mostly deserted. 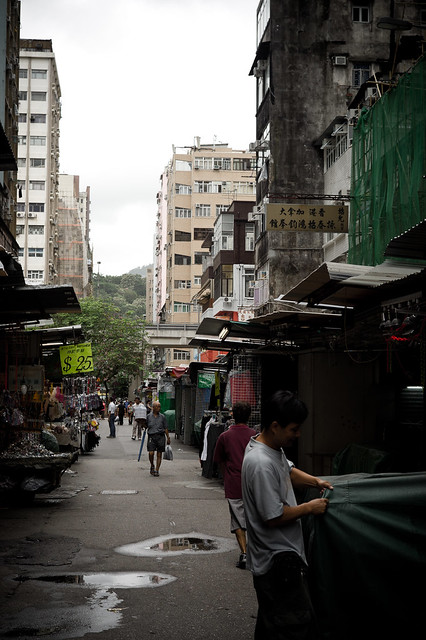 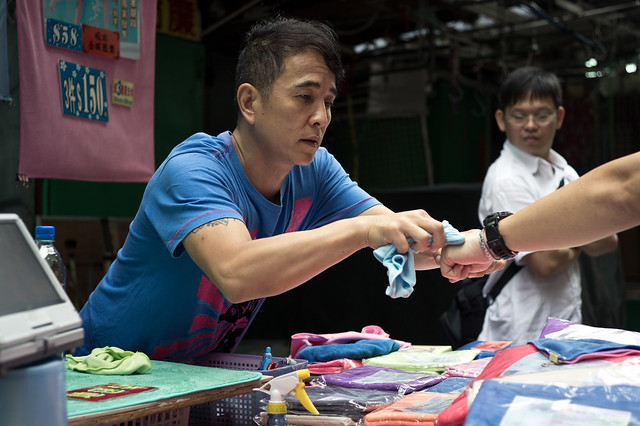 We explored Garden Street again on the last day. In the morning there aren’t as many shops open but there are still interesting things to see. This microfiber towel stall, for example. 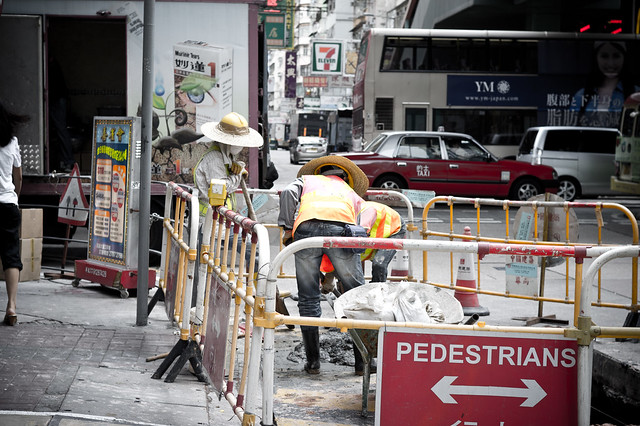 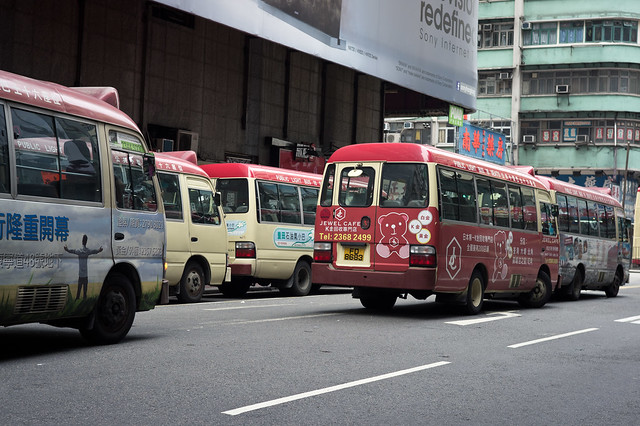 Apart from the usual public buses, there are also light buses that seems to stop at almost random places (without bus stops) to pick up passengers. For tourists I think taking a cab to get around is best option. 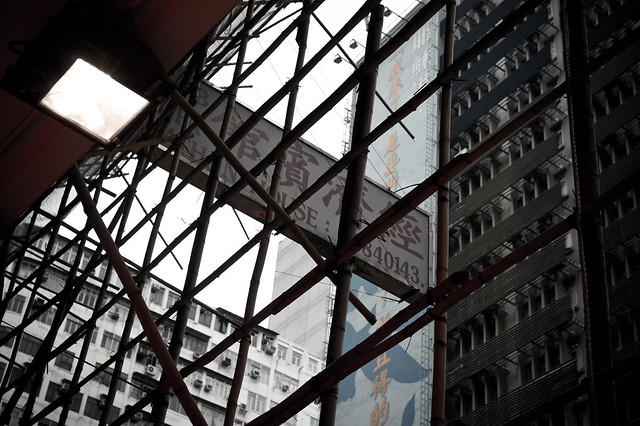 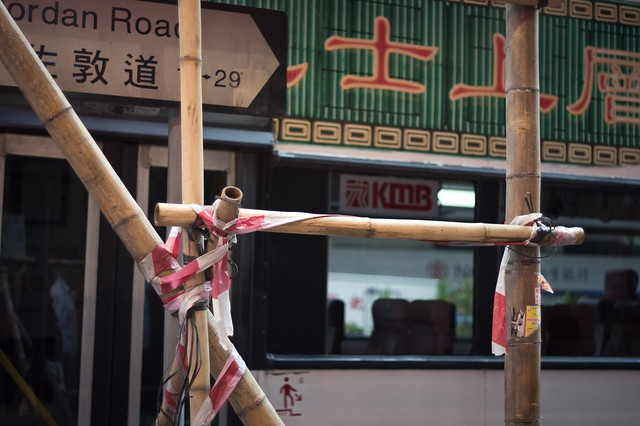 The buildings in Hong Kong seem to be always in a state of construction (or re-construction). Bamboo is used for scaffolding and it seems rather precarious to walk under them when there are strong winds, especially when you discover how they’re held in place together! 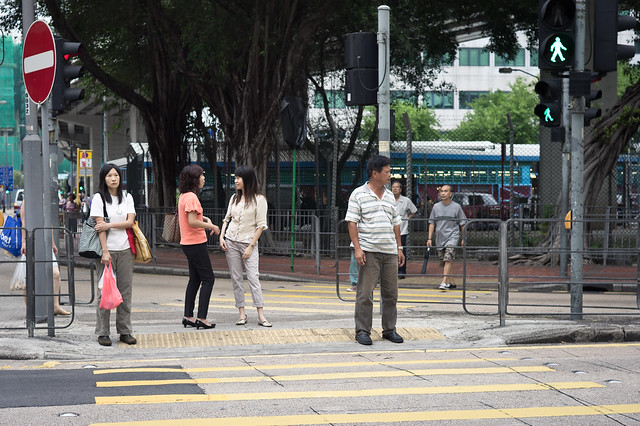 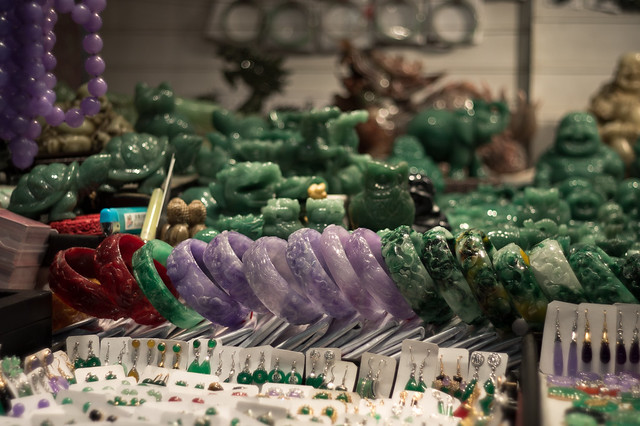 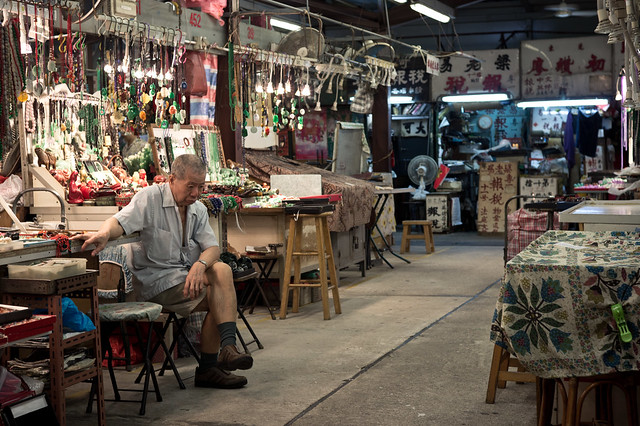 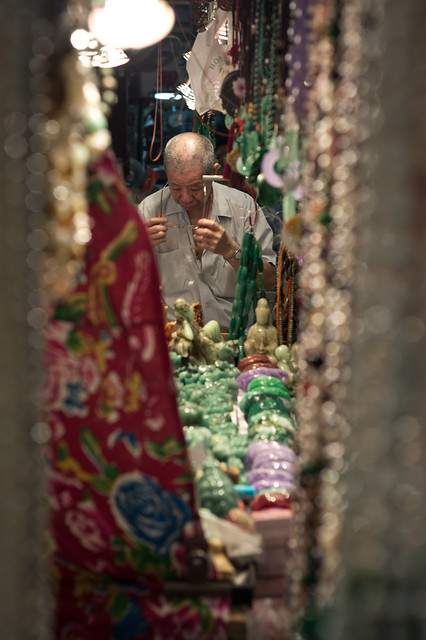 The northern section of Canton Road houses Jade Market. According to my Mom, it is very difficult to find any good deals here anymore if you are in search of higher quality jade. Apparently there is now an EVEN higher concentration of mass-produced altered jade, so do be watchful and well obviously, bargain!! until the stall owner brings her broom out to chase you away, that is. 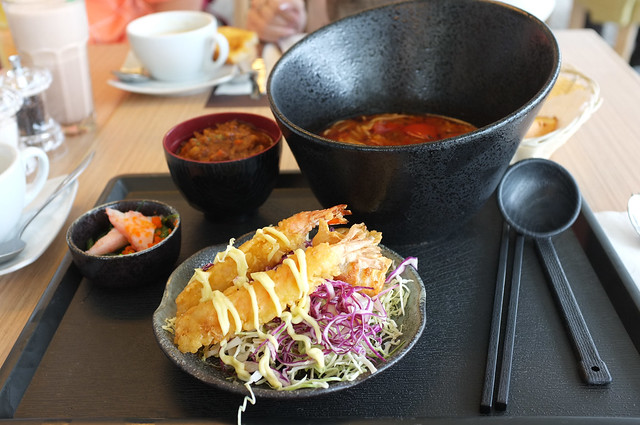 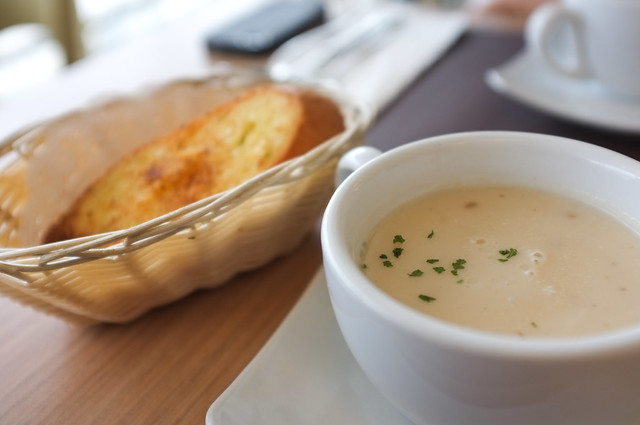 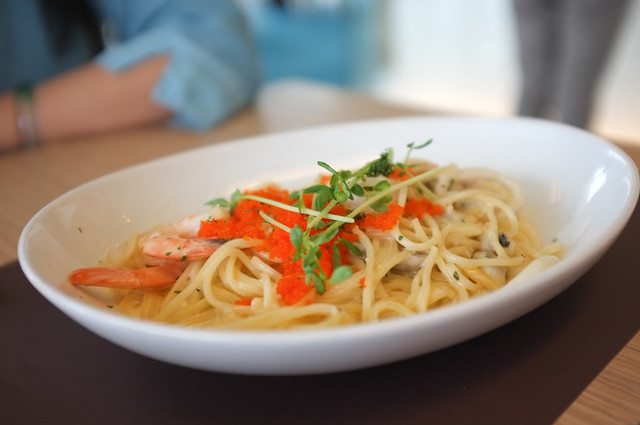 At last, it was time to go to the airport. There is now a very large food court in the departure hall, but it was too crowded and crazy so we just went to this restaurant with an quaint name – Cooking Mama 360. There is no relation to the famous series of video-games, but the food served here is more interesting than their name – there’s a mix of Korean and Japanese dishes that are coupled with Pasta-style mains, but with thick wheat noodles. Worth a try! All photographs were snapped using my NEX-5 with a rather old LEICA Summicron-C 40mm f/2.