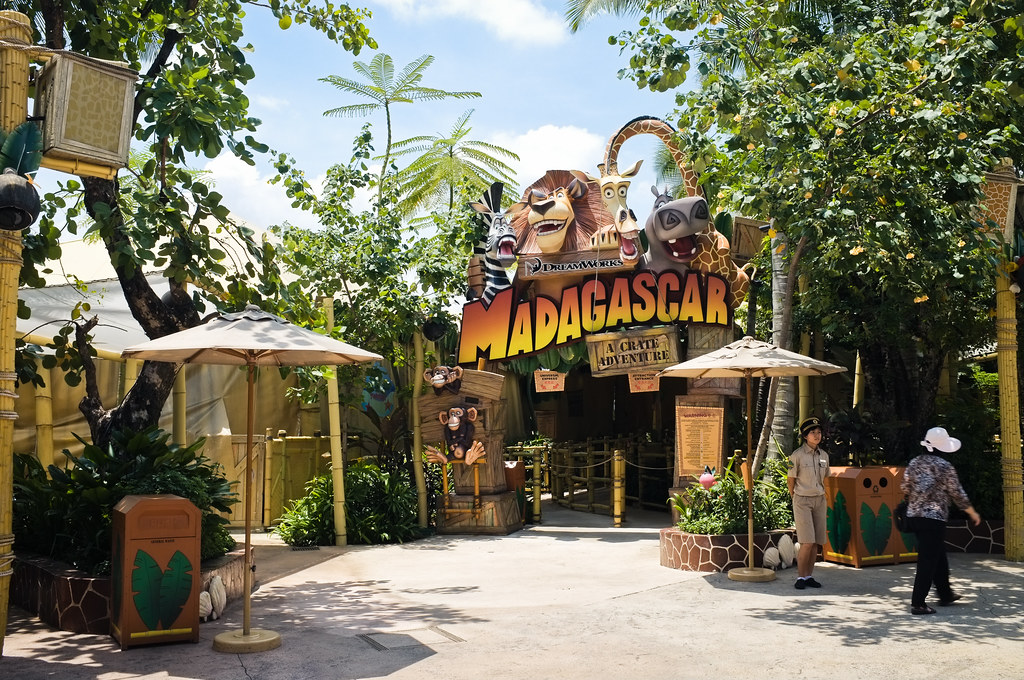 Madagascar: A Crate Adventure (MCA) is an attraction based on the successful Madagascar film franchise. It is a gentle river boat ride designed for children. The official ride description explains: Join our four heroes – Alex, Marty, Melman and Gloria – on a river boat adventure as you arrive at the shores of Madagascar. Defeat the foosas at the rim of the bubbly volcano cauldron with the aid of the technically-savvy but psychotic penguins.

While this ride is supposed to be one of the park’s “E-ticket”* attraction, this attraction can be best described as a C or D-ticket ride when compared to other attractions at an international level.

A year later, The Crate Adventure is finally ready to be open. 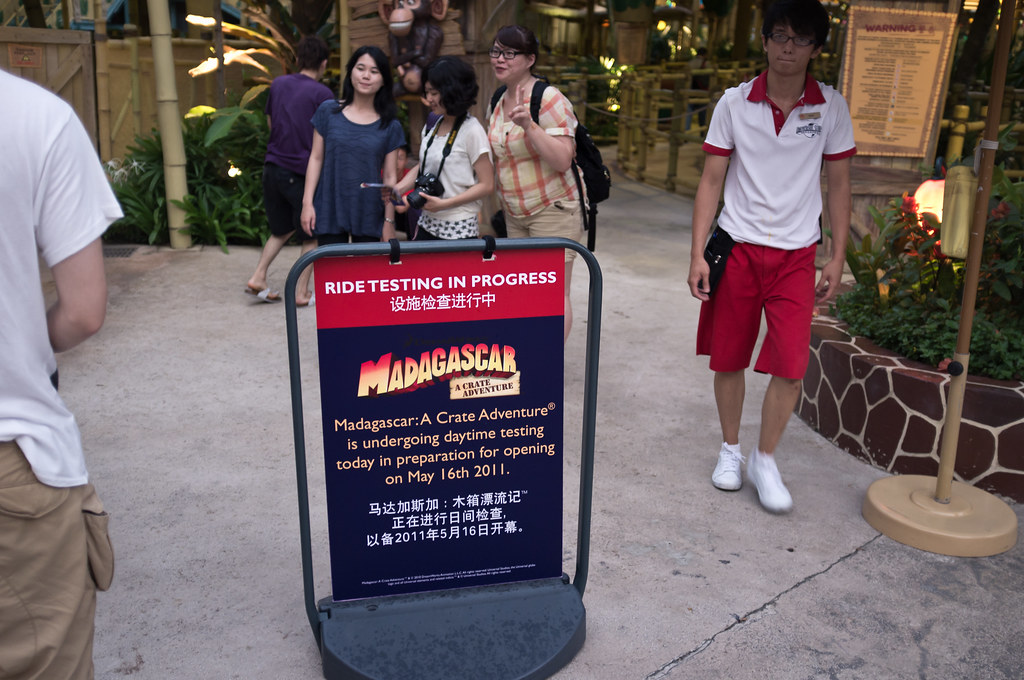 As an Annual Passholder, I was invited to the Passholders’ Preview event on 13th May 2011. The turn out for this event was tremendous – easily a few thousand passholders attended the event, spawning a need for a long line of excited guests queuing to enter the Madagascar zone, which will only be open from 8pm that night, in order to enter the MCA ride queue. 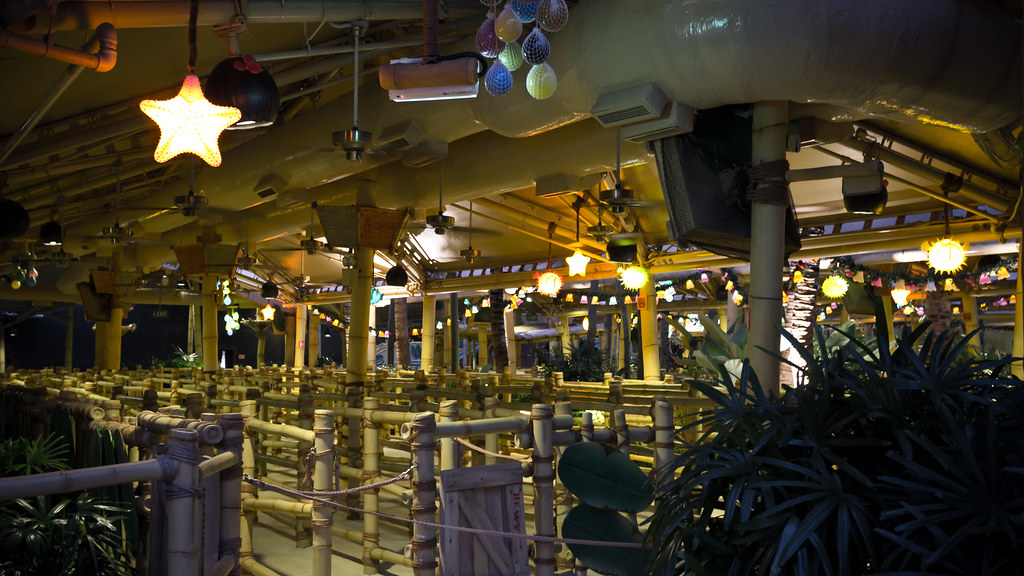 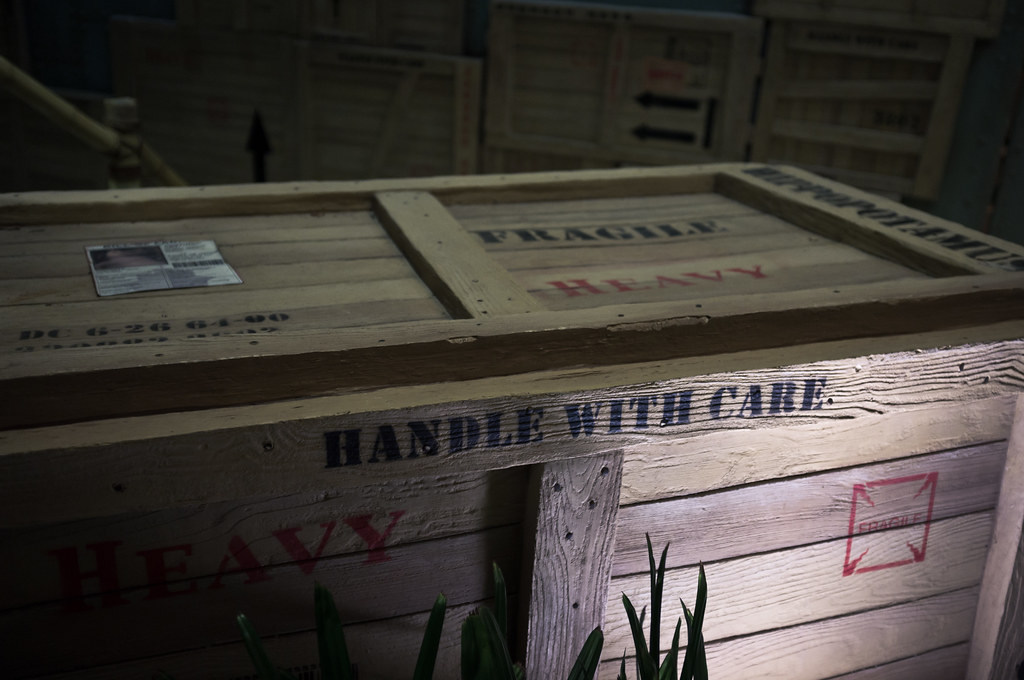 The queue area of MCA has a large capacity: The stand-by line is a series of 5 zigzag, switch-back queue zones. Universal Express line is truly express (as compared to other ride queues in the park which follows most part of the normal queue but with many shortcuts), leading directly to the loading platform in seconds. There are no interactive or narrative elements in the queue, apart from some video screens giving some back story about the attraction. The queue however, is very lushly decorated with flora and fauna, draped with colourful flower lamps and crates scattered all over. 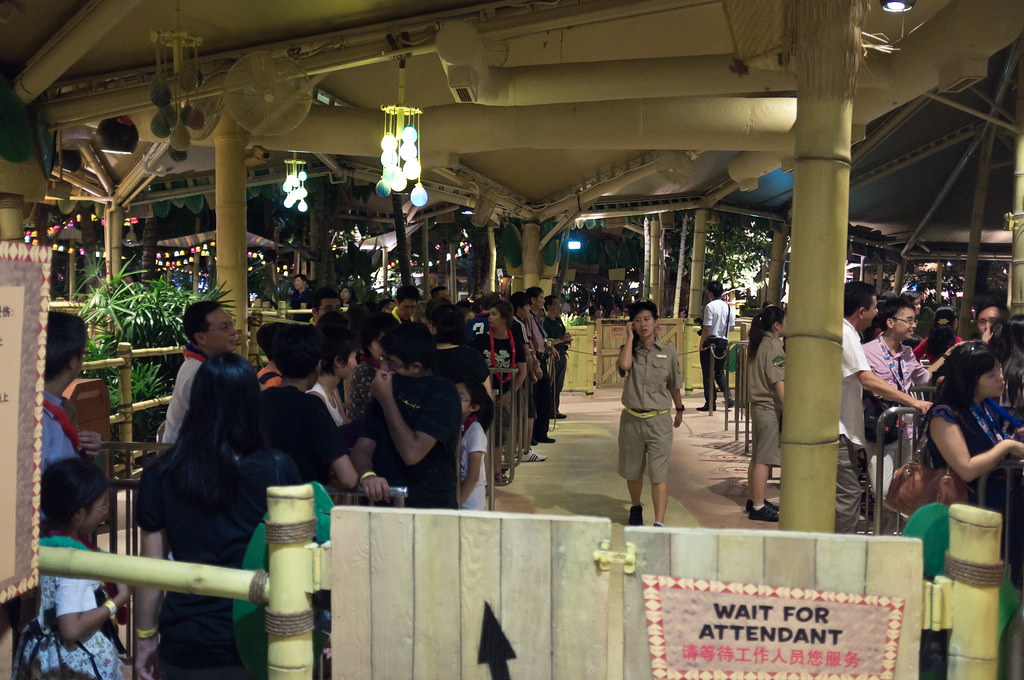 Fortunately, the ride has a very decent capacity**, so the queue moves briskly. The loading platform also has an efficient and clear system to direct guests to the boats clearly and with ease – only possible with the courteous and energetic MCA crew!

**Maximum of 20 guests per boat, each ride takes about 10 minutes with load/unload which means each boat can serve 120 guests, in ideal conditions. Now we need to figure out what’s the maximum number of boats the ride could use at any time, but I’ve seen at least 5 pairs of boats running (10 boats, so 1200 guests per hour in a best case scenario?) 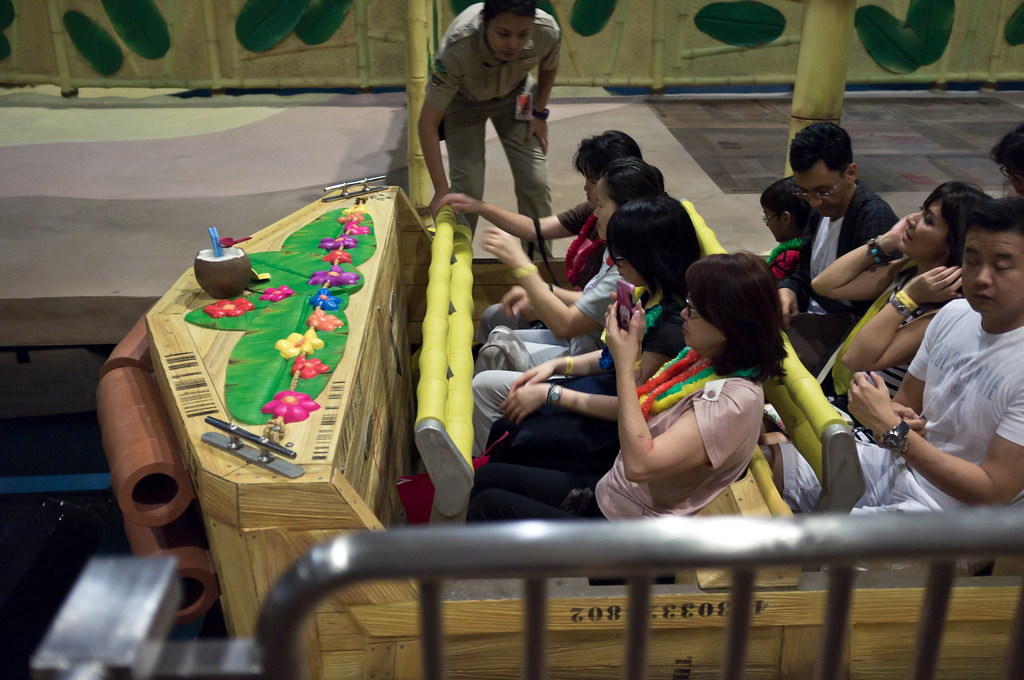 Adorable crate-like boats are used in this attraction. Each boat has 5 rows of seats, with a maximum capacity of four adults per row, with soft bamboo-shaped lap bars for each row. Unlike usual gentle river rides like Pirates of the Caribbean and It’s a Small World, MCA does not use any track or guide rail system, there is nothing in the water – giving the ride a slightly different “afloat in the water” feel. The boat is moved entirely by the currents, with hidden wheel bumpers beneath each boat to allow itself to maneuver along the ride’s water channel.

The Ride
While I do not wish to spoil the ride for readers, the story of MCA is heavily adapted from the first Madagascar film. The ride starts from the scene where the Madagascar animals wake up to find themselves trapped in crates on a ship. Almost immediately, the penguins take over the ship and after a brief chaotic scene with crates falling overboard, the animals find themselves stranded on an island, settling down comfortably soon after. Or not it wasn’t so comfortable, once they discover the natives! 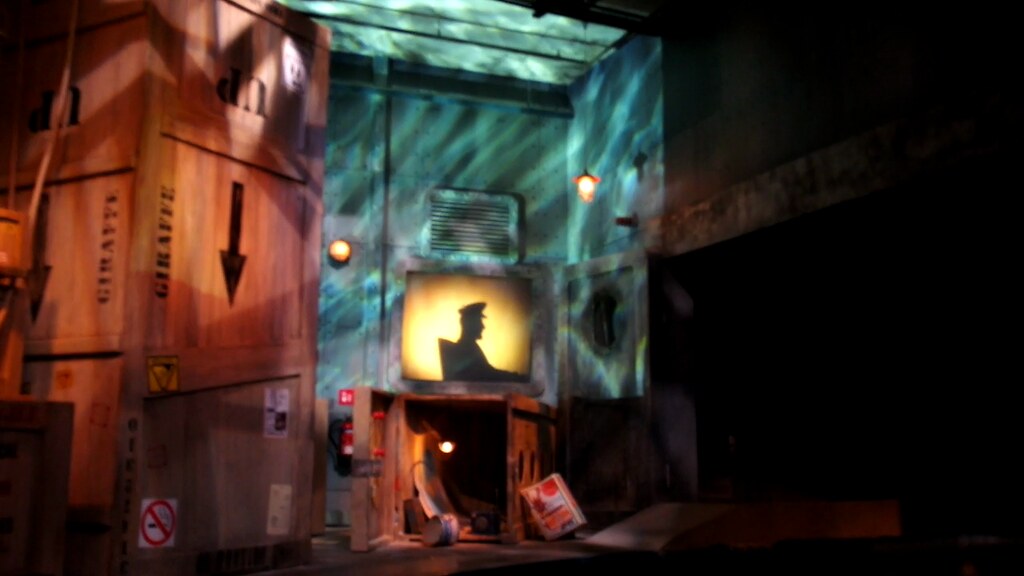 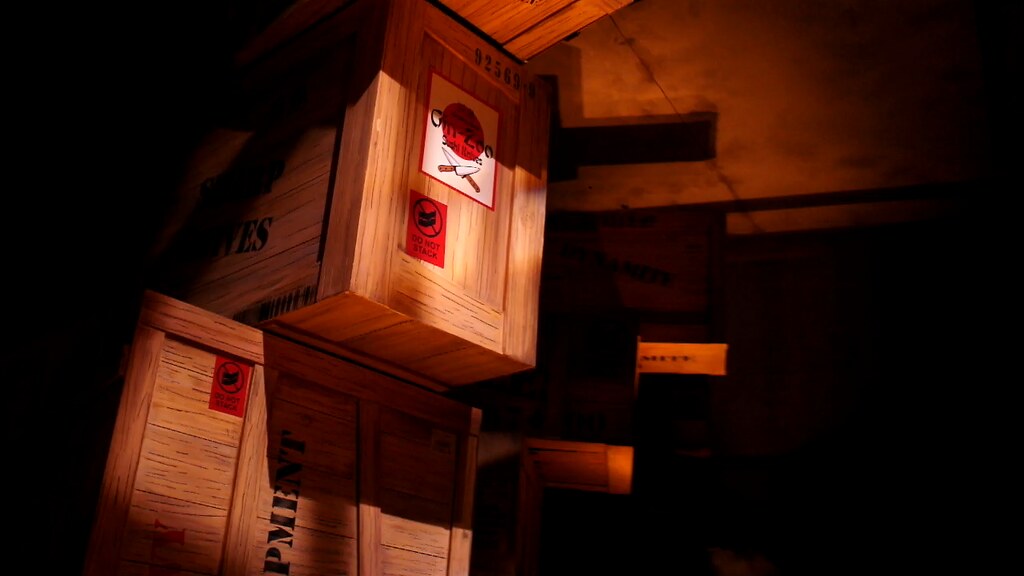 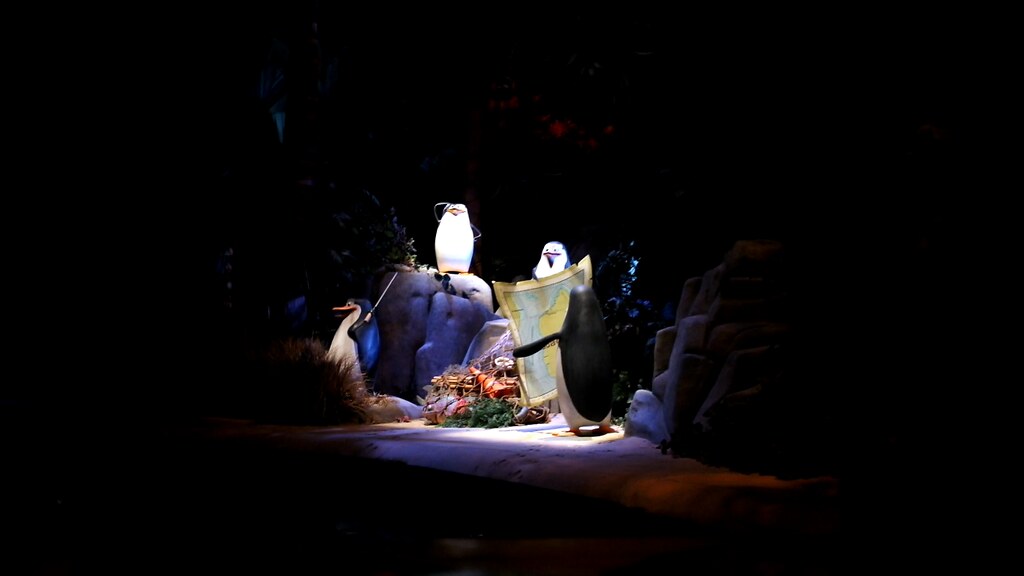 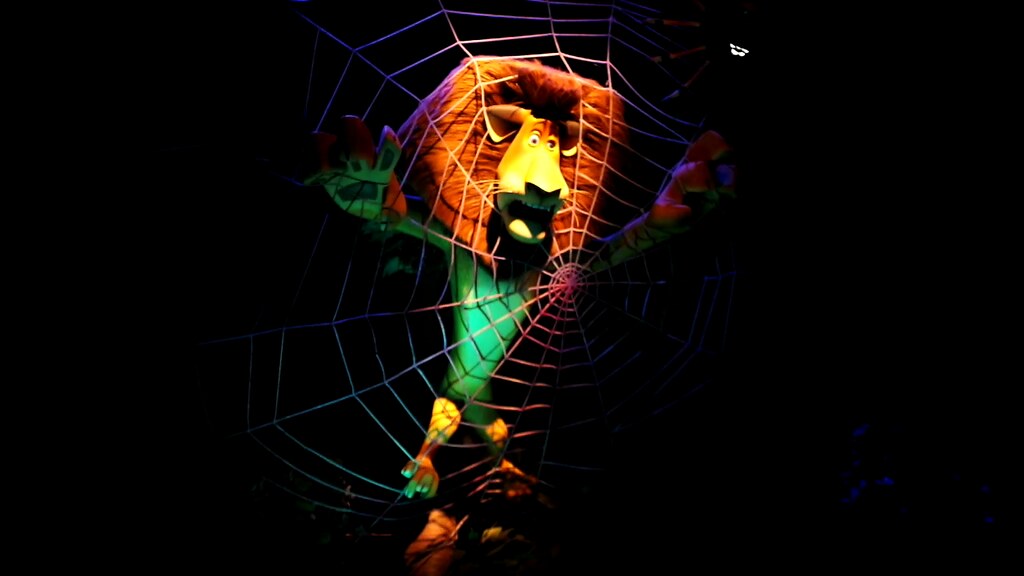 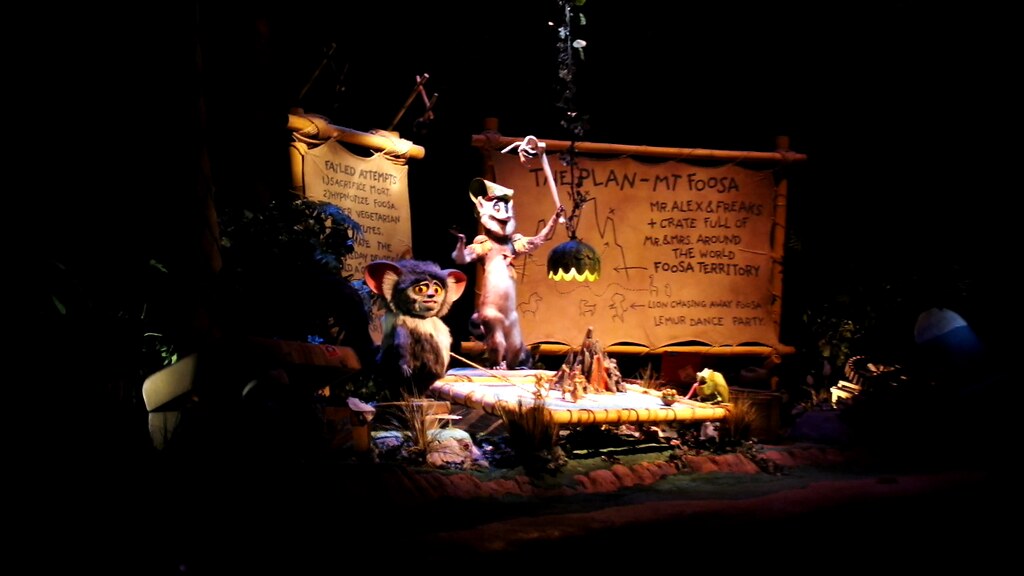 My thoughts on the ride
Visually, the attraction looks impressive and I can see that there is certainly a great deal of hard work and effort behind it. The ride is very well decorated with a wealth of detailed props and thematic lighting.

In terms of music, the main themes and yes, the famous “I Like to Move It” song are used throughout the ride. It is all very fitting to the ride scenes, although the sync between scenes could be better – the music does not loop or flow smoothly at some scenes. Also lacking is new arrangement of music in the queue area – it gets tiring hearing the “Whacked Out Conspiracy” theme over and over! (Actually this is a problem with the park in general, there is barely any original music in the park, but recycled tunes from the films.)

Now, onto the animatronics: There is a lack of consistency among the animated robotic characters/props. There are some figures with a great degree of movement and some that really just “moves up and down”. As they are all placed in the same scene and at the same distance from guests, it does feel like they were actually supposed to animated and was probably not working properly. Possibly to mask the lack of (or limitations) of the animatronics’ animation, spotlights are turned on only when the characters are about to move/speak and then switched off when they are done. This may cause some parts of the scenes to be missed entirely. It also gave me the impression that the park made a lot of compromises due to budget constraints, as they had to rebuild many segments of the ride.

The MCA storyline is chopped into bite-sized pieces and simplified, which I feel was to better suit the main target audience of the attraction, children. To keep the ride family friendly, there aren’t any exciting ride elements, such as dramatic directional change, lifts and drops. The boat just gentle floats along the river for 7.5 minutes. Therefore it is very common to see bored adults streaming out from the ride’s finale. There isn’t exactly an energetic “YAY!” moment at the unloading platform when the crew member tried to stir up a round of applause (a common practice performed at all rides in the park)

The theme park-techy aspect here: I am a little concerned about the loading/unloading platform. There is only one of such platforms and if something is were to happen there, it would disrupt the flow of the entire ride and choke up the loading/unloading process, causing guests to be stuck. Given how there is no track or any sort of barrier gate system in the river, there is no way to stop the ride other than stopping the water current. I saw a situation where the conveyor belt used to hold (and release) the boats safely at the platform has malfunctioned and caused all the boats behind to stall. Since there’s no way to stop the river from flowing (quickly enough) the boats would just pile up together, as seen below – unfortunately just when the crew members were adding extra boats to cope with the long lines. Hopefully the ride engineers can resolve this issue in time for the ride’s grand opening on the 16th. 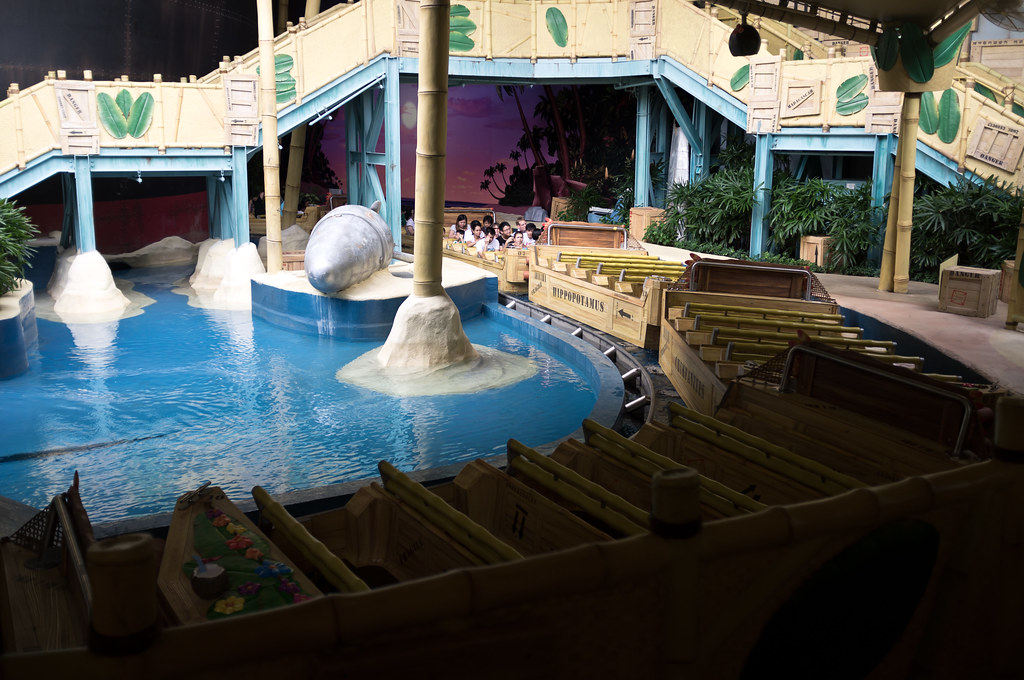 So in general, how good is this ride? What can it be compared against? Putting things into perspective (children’s ride, family orientated attraction) and that I have downplayed my expectations when it comes to what the park offers… I would say that MCA is better than the Winnie the Pooh and It’s a Small World attractions in Hong Kong Disneyland. Some have said to me that overall, MCA can be compared to the Monsters, Inc. Mike & Sulley to the Rescue! at Disney California Adventure. The mentioned rides opened many years ago, however. This is 2011. I would expect something similar, or better than Sinbad’s Storybook Voyage from Tokyo DisneySea (which was opened in 2001 and had a narrative revamp in 2006).

The debate is moot however, when I heard and saw families laughing throughout the ride and thoroughly enjoying themselves. They hurriedly got off at unload and queued for the ride again. The ride has found success with its actual target audience. And also importantly, this is something that grandparents and their grandchildren can finally enjoy in the park together. So as long as it can amuse and entertain the right target audiences, Madagascar: A Crate Adventure, can still be a star attraction in Universal Studios Singapore. 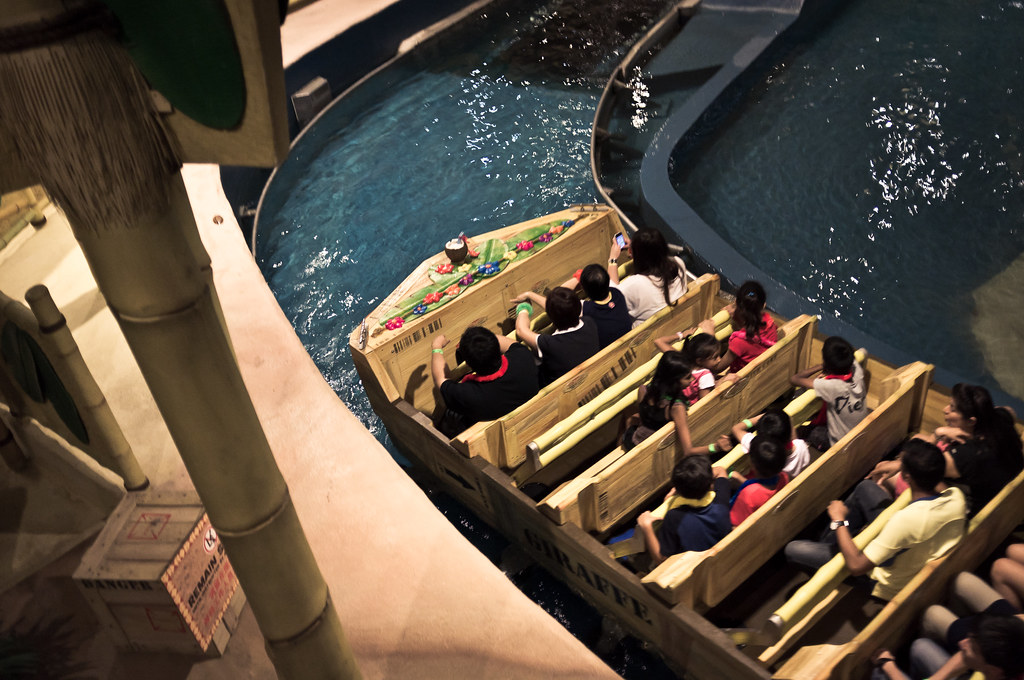 My thoughts on the event
Compared to the Annual Passholders’ event for Battlestar Galactica, the MCA event was a lot better. Ticketing booths were used as opposed to makeshift tables. The Madagascar area was thoroughly cleared and remained exclusive for Annual Passholders for the night.

There was also a little fanfare when the ride opened – drinks were served to all guests (not just Superstar Annual Passholders!) and the staff handed out colourful plastic garlands as they welcomed guests into the attraction queue. I believe there was also a Meet-and-Greet with Madagascar characters. Everyone went home with a little gift bag: a Lanyard card and a memo pad. It’s a nice gesture. In contrast, the Battlestar Galactica event was what theme park enthusiasts call “ERT”. Exclusive Ride Time. It was really bare-bones and there was nothing special going on except the roller-coasters operating at night. They have really turned around this time and got a lot more staff to help out with the event, be it interacting with guests or other small but important duties. 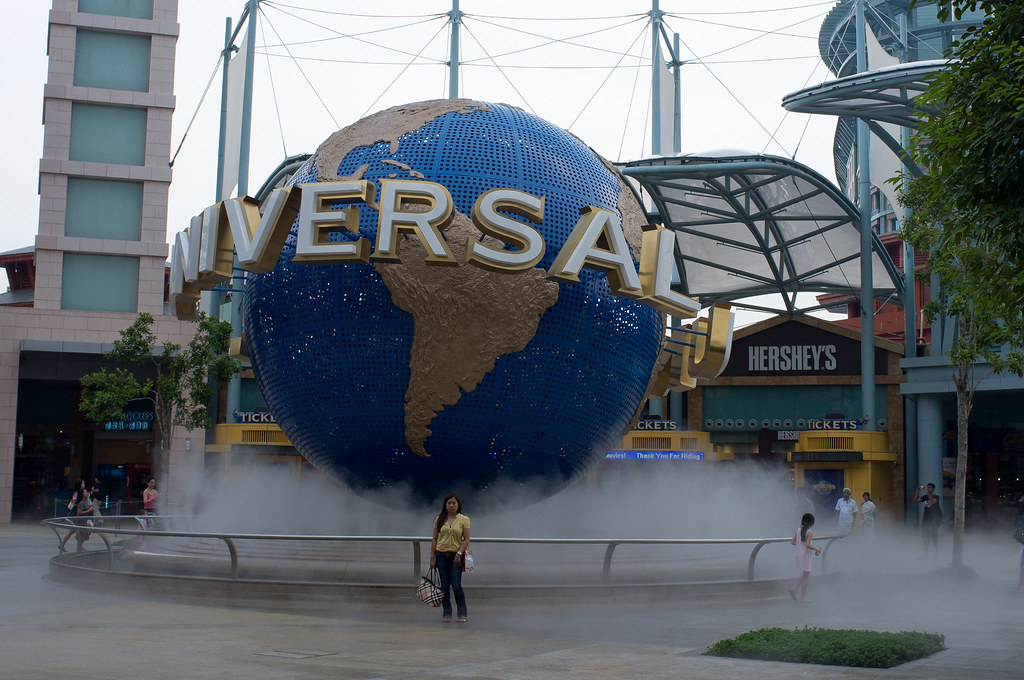 It seems like a good sign that RWS has heard, or is starting hear what their guests have to say. The park appears to have rebounded from the “soft opening slump” and is finally looking more refined. The globe has been repaired and there are a lot of minor improvements everywhere. Plus, the park is finally going to celebrate its grand opening on 28th May 2011. Keep up the good work!

Bonus Section
Here you will find links to various media related to MCA:

The ArtScience Museum
The FinePix X100