The curtain has finally lifted for Halloween Horror Nights 4 (HHN4) a few days ago, when Jonah Goodwill arrived at Universal Studios Singapore. The grand inauguration ceremony held at Pantages Hollywood Theatre took a turn for the worse when protesters emerged – even one tried to attack the new Minister.

BREAKING: Witness the terrifying Inauguration Ceremony for the new Minister of Evil here! »

Goodwill swiftly subdued the protesters – with loud explosions and violent fires. He finally revealed his true identity as a demon, and HHN4’s Minister of Evil.

On 24th July, I received these mysterious objects from the park. I guess… it should be the beans from the Puss in Boots film, which.. by extension, lends credibility to the theme of this new attraction. Yes, finally – the new ride at USS should be a Puss in Boots-themed rollercoaster.

The name of the ride is Puss in Boots’ Giant Journey. There will also be a new stage show, called Dance Off for the Magic Beans, at Far Far Away. Kitty Softpaws will become the park’s newest Meet-and Greet-character!

Construction is underway at Far Far Away for Puss and Kitty’s new show. The Dance Off for the Magic Beans could possibly share the same venue as Donkey Live.

Back to Puss in Boots’ Giant Journey: If we assume that the magic beans are related to Jack’s Beanstalk, then it would fit with the ride’s green tracks. And that spiral lifthill. Good way to tie in with the story.

Check out some photos of the current construction progress:

Viewed along Romeo Drive. The spiral track is building up rather nicely.

At this stage, the ride no longer has the typical Zamperla Volare layout. I hope to be surprised by this ride’s vehicles.

It appears that not all the pieces have arrived, but the park is in a hurry to complete the track layout. Notice how some of the green tracks are not actually connected to the white supports yet?

A view from the bridge linking Far Far Away to Jurassic Park.

The pace of construction is rather rapid. These are strong signs that the park is planning to open the new Far Far Away extension and its Puss in Boots-themed roller coaster within the next 6-8 months.

Some mysterious red boxes that were added last month to the red (HUMAN) track of BSG. These could possibly be trim brakes to regulate the speed of the HUMAN (Red) roller coaster trains.

Some work lights have popped up at the back of the park, facing the final banked turn section of BSG: Human.

Also, there is some hearsay that the trains of BSG may be modified with some seats removed. The original trains are configured with 8 rows, with 4 seats in a row. Possibilities include having less seats in a row (like 2 seats per row) or the train’s length would be shortened (perhaps 4 rows, or 6). Either way, a lighter roller coaster train would definitely reduce the stress on its mechanical parts.

This came in a few weeks ago (but lost in the midst of exciting HHN4 news). 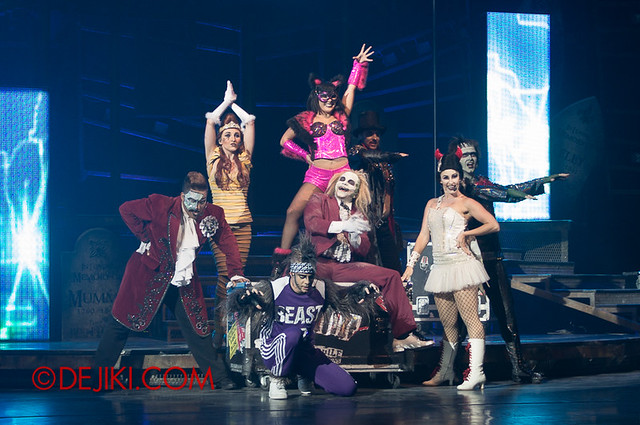 Monster Rock at Pantages Hollywood Theatre will be retiring from the park’s show line-up. The final day of performances will be on 31 August 2014. This Rock-and-Roll musical spectacular has been shown at the park since its soft opening days (March 2010) so I’m sure some fans may feel sad to see the show go. Monster Rock: Special Halloween Edition will also not return for HHN4. So don’t wait already – catch Monster Rock as soon as you can – it’ll be a while before the Universal Monsters are brought back from the dead again!

What is the new show that will take over Monster Rock? Scroll down and read more…

Sunny Surprise!
Starting from 20 September 2014, Elmo, Big Bird, Cookie Monster, Bert, Ernie, Grover and Abby Cadabby will become the new tenants of Pantages Hollywood Theatre. An all-new Sesame Street “When I Grow Up” show, enhanced from the street show performed in New York, will be taking over Monster Rock.

There have been some changes to the park over the past two weeks. The latest items are here. Scroll further down for the first edition of this month’s park update.

The covers and scaffolds have all vanished at Battlestar Galactica.

While some machinery are still spotted in the backstage area of the park’s flagship attraction, the dueling roller coasters seem intact. The entrance arch of BSG:HUMAN has some sort of rusty stain all over, though.

The tracks’ colours are very inconsistent all over the place due to recent works. But recovering the ride is more pertinent than making it look good. The date draws close to the one year mark – a year of downtime. It would be nice if the park announces some good news on that anniversary. Something like the ride will be reopened by the end of 2014 (or earlier).

The latest word is that the ride will indeed have a new identity. For now, we can still wish that it’ll remain as HUMAN vs CYLON.

Works have started at the park for this year’s Halloween Horror Nights 4. The Waterworld covered queue area has been blocked off for one of this year’s Haunted houses/mazes. Want to be part of HHN? You have one last chance to audition to be a scare actor or special talent! Meanwhile, meet this year’s HHN icon, the newly-elected Minister!

BREAKING: Witness the terrifying Inauguration Ceremony for the new Minister of Evil here! »

The track support columns for Universal Studios Singapore’s latest attraction is going taller, and taller, at Far Far Away Extension.

It is looking rather high. Guests might be able to see the ride from across the lagoon (from New York and Hollywood).

One of the faux store windows at Far Far Away’s Romeo drive has been masked off. This is the popular Versarchery window that parodies Italian fashion house Versace. Curious.

The ride is being built so close to Far Far Away that well, it looks unlikely that it would be anything but an extension.

Even more new photos showing the spiral lifthill of this new roller coaster. Thanks to WF for sending in these photos!

Really cool to see the tracks coming together, huh!

Current progress, as of 24 July, showing a completed spiral lift and what seems to be a straight track with some gentle banks. At this point it does not appear to resemble the standard Zamperla Volare coaster (which has a drop shortly after the lift hill).

Thanks again, WF, for sending in the photo.

Works at Battlestar Galactica is still ongoing, with no change at the scaffolding setup.

Some machines and tools were spotted at the base of the CYLON (blue track) vertical loop.

Work lights, some other heavy equipment were seen at the specific section of HUMAN (red track) as highlighted in the last update.

While the timeline is still unclear, certainly repair works are being made at the ride. Thanks to WF for the tip-off on BSG.

The park expansion and new attraction is still a mystery, but perhaps we will get some concrete information in a few months.

Yes, those are track support structures.

The new attraction at USS, built at the Far Far Away zone (next to Donkey Live!) is apparently going to be a roller coaster. Given the hints so far, and the type of track used… I guess it could be some form of Suspended Family Coaster by Vekoma (or Zamperla, as noted on TPR).

Previous rides built in this category (Suspended Family) uses smaller roller coaster trains that seat 2 guests in a row. It may use similar ride seats and restraints already seen at the park (Battlestar Galactica) but modified to allow younger guests to go on the ride. Designed with families in mind, such roller coasters do not have inversions. It may however have some tilting/swinging elements.

I’m not sure how high or fast this ride would go, but I must applaud USS for building another roller coaster, especially a suspended one! Given the tight space at the expansion site, the track layout should be a custom design, or a heavy modification of one smaller off-shelf ride layouts that the ride manufacturer offers.

The track colour is green, so you can predict what the ride is about. It is unclear if the ride would be entirely outdoors (excluding the loading/unloading platform, queue, etc.) or run have some indoor scenes. The track section on the left is very close to Donkey Live! show building at Far Far Away. I can go on and on with my speculations, but maybe instead we’ll play a game:

Make a guess on what the ride’s name, and the themed area would be. Post your entry by leaving a comment. I’ll give out a prize (a bag of USS park goodies!) to whoever gets it right in the end!

Example:
The new ride in USS will be called Gingy’s Glider* in an area called Shrek’s Faire Faire Away*.

*Trivia: These are real rides and themed zone names found in Dreamworld, Australia!

Anyway, everyone is always welcomed to send in tips and photos about anything happening at the park. 😉

Transformers: Age of Extinction at USS

The park celebrated the opening of the new Transformers: Age of Extinction movie with some themed retail spaces.

Over at Hollywood zone’s Universal Studios Singapore Store, you can find Optimus Prime gazing majestically at park guests through a store window.

At Sci-Fi City, Transformers Supply Vault has a pop-up section right outside, because there are way too many new toys to buy.

Even if you don’t intend to splurge on the new toys, don’t miss this Sci-Fi City Diorama inside Transformers Supply Vault.

Made with KRE-O bricks and Transformers toys, this is certainly an exciting scene of Sci-Fi City being overrun with robots.

The attention to detail is really commendable. Even the Bumblebee at the Transformers ride marquee is posed as closed as the life-sized one outside.

Except for this “Hong Kong” sign, which is totally random.

Wonder how the Despicable Me Minion Monopoly looks like? The park has put together a display set at Minion Mart.

Need a roomy bag for sundries? Grab one of these Minion Drawstring bags for $21.90. It’s so bright and loud, you’ll never forget it. 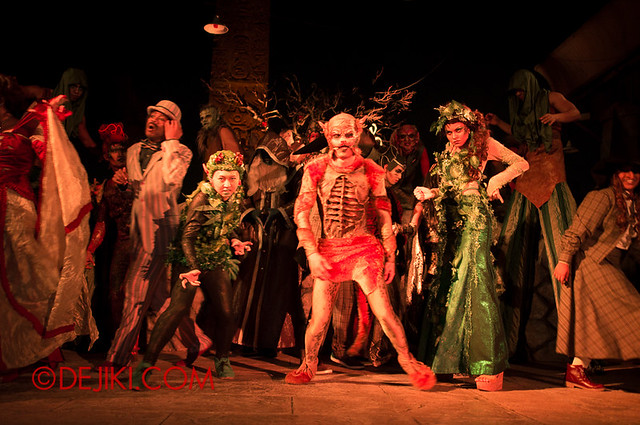 Missed the Halloween Horror Nights 4 (HHN4) auditions? Fear not! The park is holding a final audition on 19 & 20 July 2014. Get inspired by this new video:

For more details, refer to the official Auditions page.

The Halloween Horror Nights 4 website had a teaser image of a burning city, with images of haunting skulls rising from the smoke.

Jonah Goodwill – The Minister for HHN4

On 11 July, it was unveiled that Jonah Goodwill, a well-decorated military commander, would become The Minister – this year’s icon for Halloween Horror Nights 4 Singapore.

UPDATE: Witness the terrifying Inauguration Ceremony for the new Minister of Evil here! »

Sounds exciting. Also, you can now sign up for email notifications of the park’s best event!