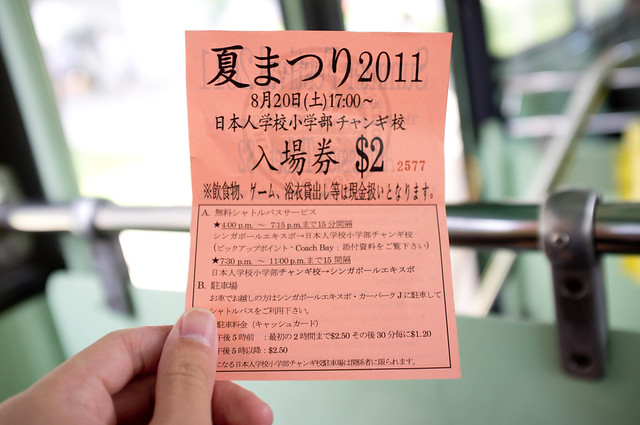 Natsu Matsuri, or Japanese Summer Festival, is an annual event held at The Japanese School (Primary Level) in Changi, Singapore. Highlights include festival games, performances and a bazaar sprawling across almost all major hallways at ground level.

Although I knew about this event for years, I have not been to the festival until mere days ago. This is the first time I secured my admission ticket before the event, thanks to Dwight and his connections at the NUS Japanese Studies Society. Each ticket costs $2 – just a token fee – but the most important thing is getting tickets BEFORE the event, so that you could bypass the long line outside the school and enter the festival compound quickly. 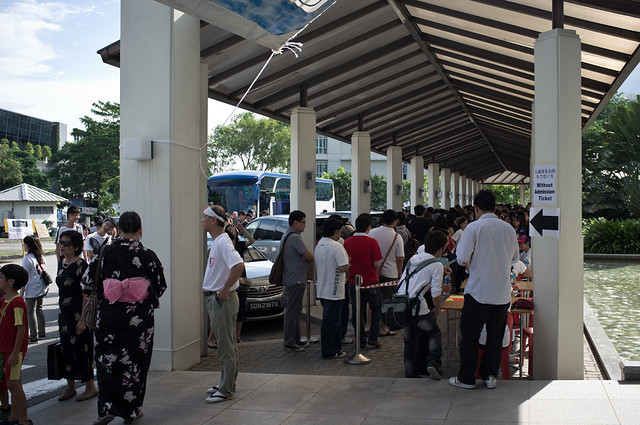 The queue is actually 6-7 times longer than what it appears here.

There are actually 3 lines at the festival: Queue to buy tickets, queue for those with tickets on hand, and queue for those who wish to rent yukatas. Yukata and Obi goes for $2 and $1 respectively and can be worn throughout the evening until the festival programme ends. 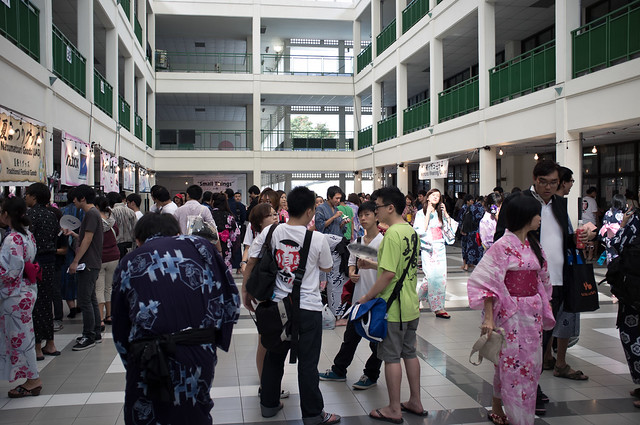 As for the bazaar, it’s a mix of the usual Japanese snacks, such as Takoyaki, Okonomiyaki, to bento boxes and some unusual treats – the infamous candy apple for example, which gets sold out within the first hour of the festival. Food here is slightly marked up compared to outside, but hey, it’s really all about the atmosphere here! As for the merchandise available here, well, there was a stall selling some figurines at fire-sale prices. If you are in the market for Japanese trinkets, there were quite a selection available. There was even a random nubox outlet selling accessories for Apple products(?!). The main problem really was getting around because of crowd issues, despite the organiser’s efforts. 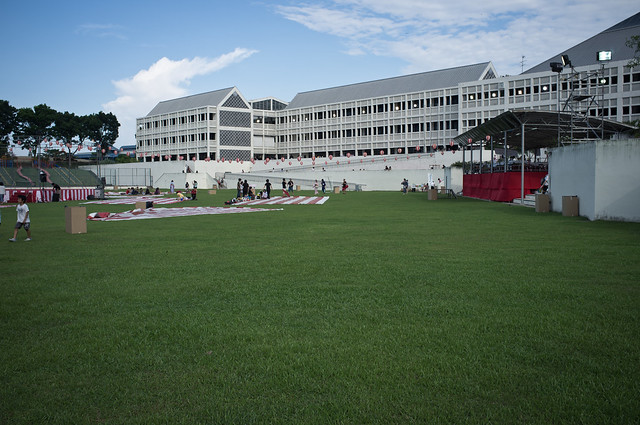 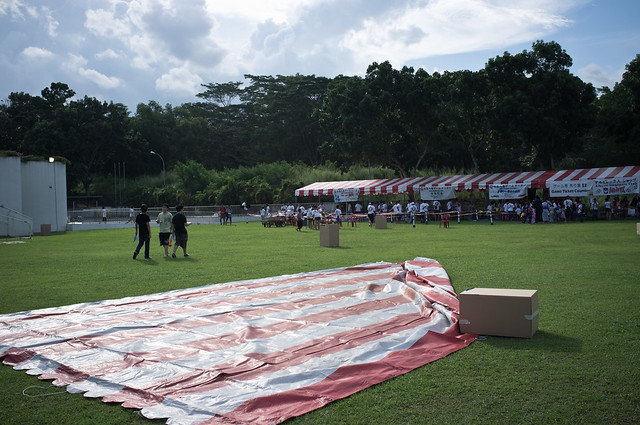 The expansive grass field is most people would end up later in the evening, either to enjoy their picnics in the open and/or watch the performances. Festival games are located at a far corner of the field. 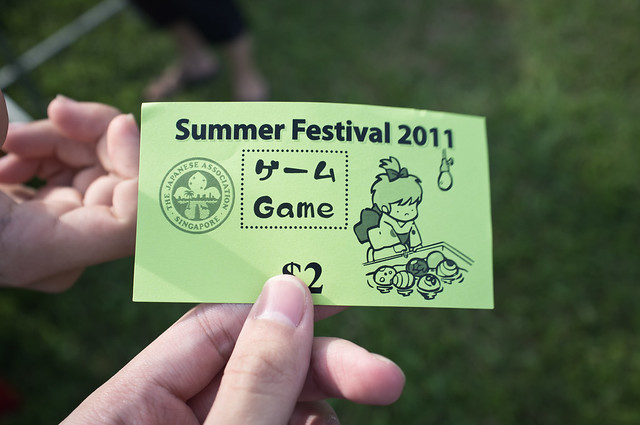 Festival Games (as in, the “official” games conducted by the event organisers) cost $2 per game round. One tip: Buy game tickets early if they are offered for sale by roving staff members! The queue to buy tickets at the game booths are just as long as the line to ENTER the school. Anyway back to games: there were three stalls this year. 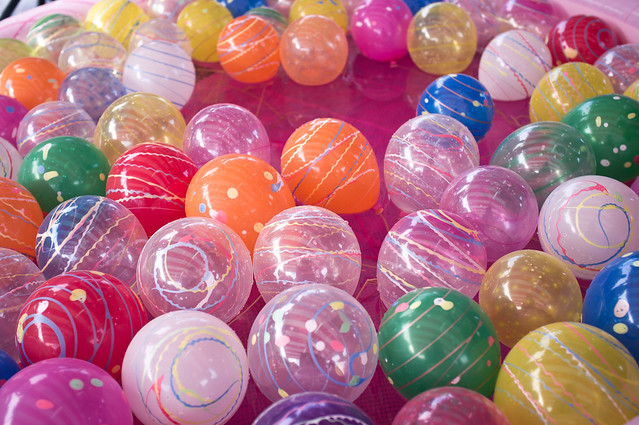 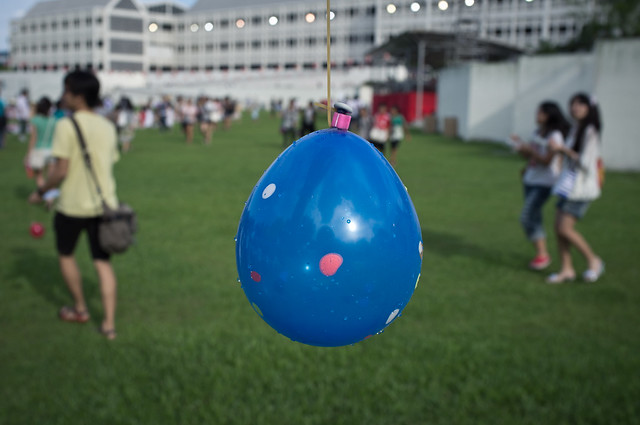 Yo-yo Tsuri, or “Yo-yo Fishing” involves picking up a floating water balloon from a pool of water. The thing is, you are only given a “W” shaped hook that is attached to a curious white “string”. Sounds easy? Unfortunately most players end up catching nothing! Well, the white string is just rolled tissue paper. The game keepers are kind though, and give away “sympathy” water balloons even if one fails. The trick here is to find the lighter balloons – those that are floating higher than the rest. I managed to catch one water balloon (which had barely any water), but made the mistake of swishing the hook around to get a better view of the rubber band loops – the paper broke when I tried to lift another balloon. 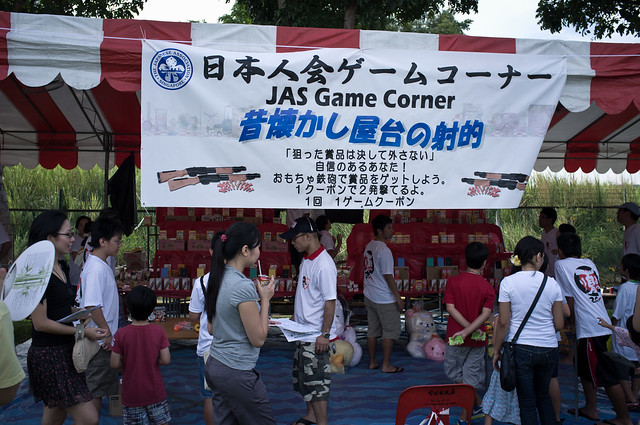 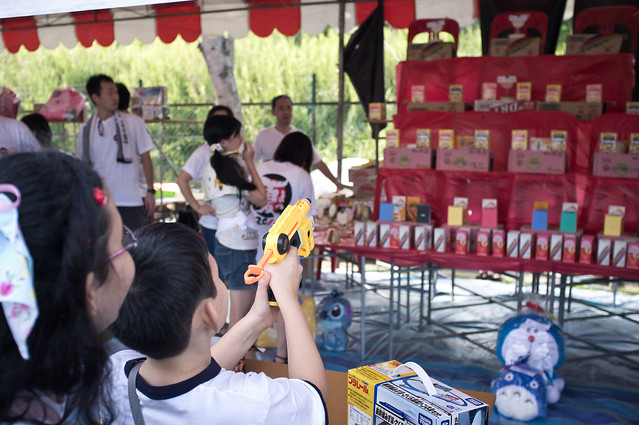 The second game, which I will just call Shooting Game uses NERF guns instead of the traditionally seen BB guns, thanks to local regulations. One game coupon gives you just two foam bullets – it is more of a game of luck than skill. Prizes include well, Collon biscuits, pocket notebooks (which go for $0.30 outside ??!) and some toys for children (the real prizes). 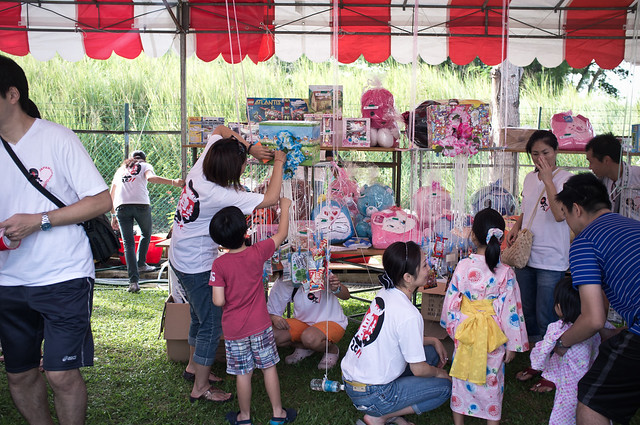 The last game is Senbonbiki (千本引き). I don’t know what’s the right translation but most people call it the “Pull String” or “Lucky String” game. Each game station is a box with a lot of strings from the centre. These strings are connected to items flowing out from the sides of the box. To play this game you simply have to choose a string and pull it, causing an item to rise. You just win that. Prizes range from small packs of snacks, cute trinkets, toys and even shockingly, the worst prize possible: a bottle of mineral water.

Since this is really based on luck, there really aren’t any strategies at all. There are three lines for this game, each with a different choice of toys: Boys, Girls and Unisex. 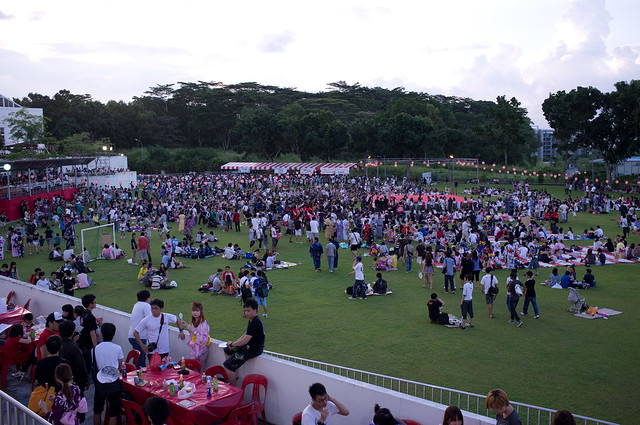 The last event at Natsu Matsuri is the Bon Odori, which is a sort of dance around the stage at the grass field. Everyone is encouraged to take part in this simple, rhythmic dance which lasts for about 90 minutes. I didn’t stay late enough for most of the Bon Odori though.